In the two equations below, note that this relationship is described in both directions.

That is, it is also true that

The second equation furthermore includes the fact that

This is not a coincidence.  Consider a generic situation with n possible outcomes and an event E that corresponds to m of these outcomes. Then the remaining n – m outcomes correspond to E not happening, thus 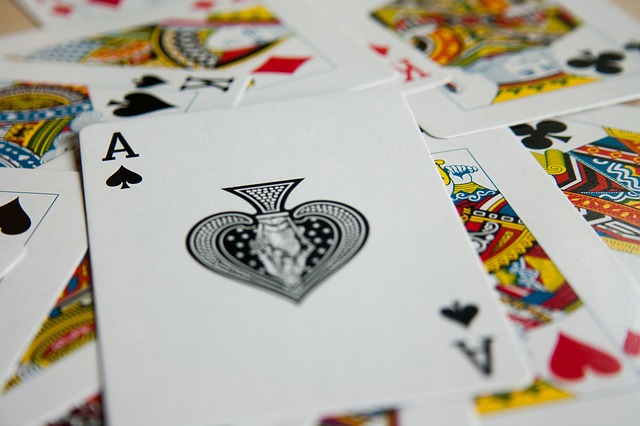 Complement of an Event

If you pull a random card from a deck of playing cards, what is the probability it is not a heart?

This situation is explained in the following video.

Suppose we flipped a coin and rolled a die, and wanted to know the probability of getting a head on the coin and a 6 on the die.

The prior example contained two independent events. Getting a certain outcome from rolling a die had no influence on the outcome from flipping the coin.

Events A and B are independent events if the probability of Event B occurring is the same whether or not Event A occurs.

Are these events independent?

P(A and B) for independent events

If events A and B are independent, then the probability of both A and B occurring is

The probability of choosing a white pair of socks is [latex]\frac{6}{10}[/latex].

The probability of choosing a white tee shirt is [latex]\frac{3}{7}[/latex].

Examples of joint probabilities are discussed in this video.

Suppose we flipped a coin and rolled a die, and wanted to know the probability of getting a head on the coin or a 6 on the die.

The probability of either A or B occurring (or both) is

Suppose we draw one card from a standard deck. What is the probability that we get a Queen or a King?

There are 4 Queens and 4 Kings in the deck, hence 8 outcomes corresponding to a Queen or King out of 52 possible outcomes. Thus the probability of drawing a Queen or a King is:

Note that in this case, there are no cards that are both a Queen and a King, so [latex]P(\text{King and Queen})=0[/latex]. Using our probability rule, we could have said:

See more about this example and the previous one in the following video.

Suppose we draw one card from a standard deck. What is the probability that we get a red card or a King?

We can then calculate

Notice that having a red car and getting a speeding ticket are not independent events, so the probability of both of them occurring is not simply the product of probabilities of each one occurring.

We also could have found this probability by:

This table example is detailed in the following explanatory video.