Once microbes became visible to humans with the help of microscopes, scientists began to realize their enormous diversity. Microorganisms vary in all sorts of ways, including their size, their appearance, and their rates of reproduction. To study this incredibly diverse new array of organisms, researchers needed a way to systematically organize them.

The Science of Taxonomy 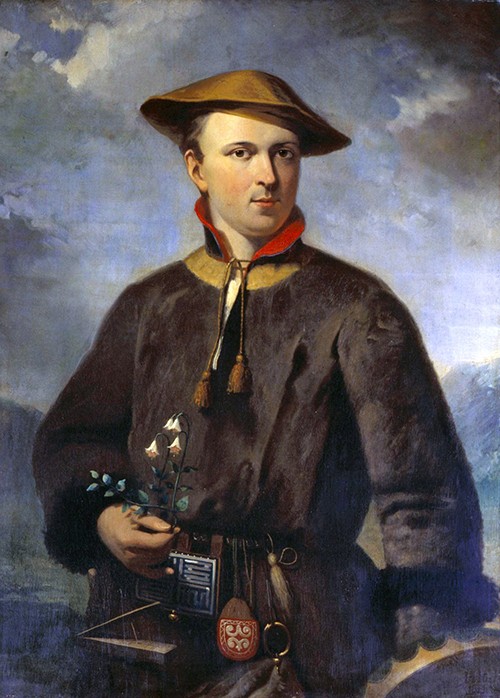 Figure 1. Swedish botanist, zoologist, and physician Carolus Linnaeus developed a new system for categorizing plants and animals. In this 1853 portrait by Hendrik Hollander, Linnaeus is holding a twinflower, named Linnaea borealis in his honor.

Taxonomy is the classification, description, identification, and naming of living organisms. Classification is the practice of organizing organisms into different groups based on their shared characteristics. The most famous early taxonomist was a Swedish botanist, zoologist, and physician named Carolus Linnaeus (1701–1778). In 1735, Linnaeus published Systema Naturae, an 11-page booklet in which he proposed the Linnaean taxonomy, a system of categorizing and naming organisms using a standard format so scientists could discuss organisms using consistent terminology. He continued to revise and add to the book, which grew into multiple volumes (Figure 1).

In his taxonomy, Linnaeus divided the natural world into three kingdoms: animal, plant, and mineral (the mineral kingdom was later abandoned). Within the animal and plant kingdoms, he grouped organisms using a hierarchy of increasingly specific levels and sublevels based on their similarities. The names of the levels in Linnaeus’s original taxonomy were kingdom, class, order, family, genus (plural: genera), and species. Species was, and continues to be, the most specific and basic taxonomic unit.

With advances in technology, other scientists gradually made refinements to the Linnaean system and eventually created new systems for classifying organisms. In the 1800s, there was a growing interest in developing taxonomies that took into account the evolutionary relationships, or phylogenies, of all different species of organisms on earth. One way to depict these relationships is via a diagram called a phylogenetic tree (or tree of life). In these diagrams, groups of organisms are arranged by how closely related they are thought to be. In early phylogenetic trees, the relatedness of organisms was inferred by their visible similarities, such as the presence or absence of hair or the number of limbs. Now, the analysis is more complicated. Today, phylogenic analyses include genetic, biochemical, and embryological comparisons, as will be discussed later in this chapter. 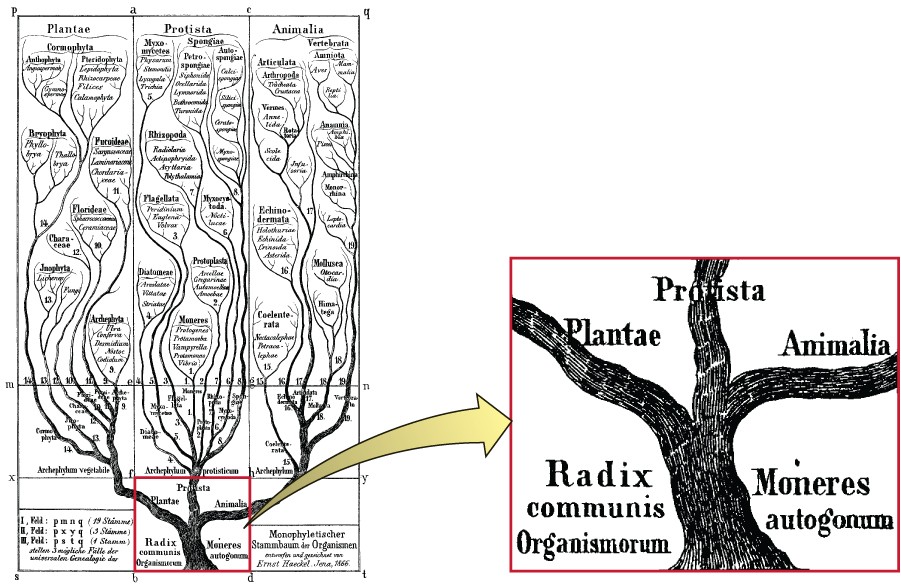 Figure 2. Ernst Haeckel’s rendering of the tree of life, from his 1866 book General Morphology of Organisms, contained three kingdoms: Plantae, Protista, and Animalia. He later added a fourth kingdom, Monera, for unicellular organisms lacking a nucleus.

Nearly 100 years later, in 1969, American ecologist Robert Whittaker (1920–1980) proposed adding another kingdom—Fungi—in his tree of life. Whittaker’s tree also contained a level of categorization above the kingdom level—the empire or superkingdom level—to distinguish between organisms that have membrane-bound nuclei in their cells (eukaryotes) and those that do not (prokaryotes). Empire Prokaryota contained just the Kingdom Monera. The Empire Eukaryota contained the other four kingdoms: Fungi, Protista, Plantae, and Animalia. Whittaker’s five-kingdom tree was considered the standard phylogeny for many years.

Figure 3 shows how the tree of life has changed over time. Note that viruses are not found in any of these trees. That is because they are not made up of cells and thus it is difficult to determine where they would fit into a tree of life. 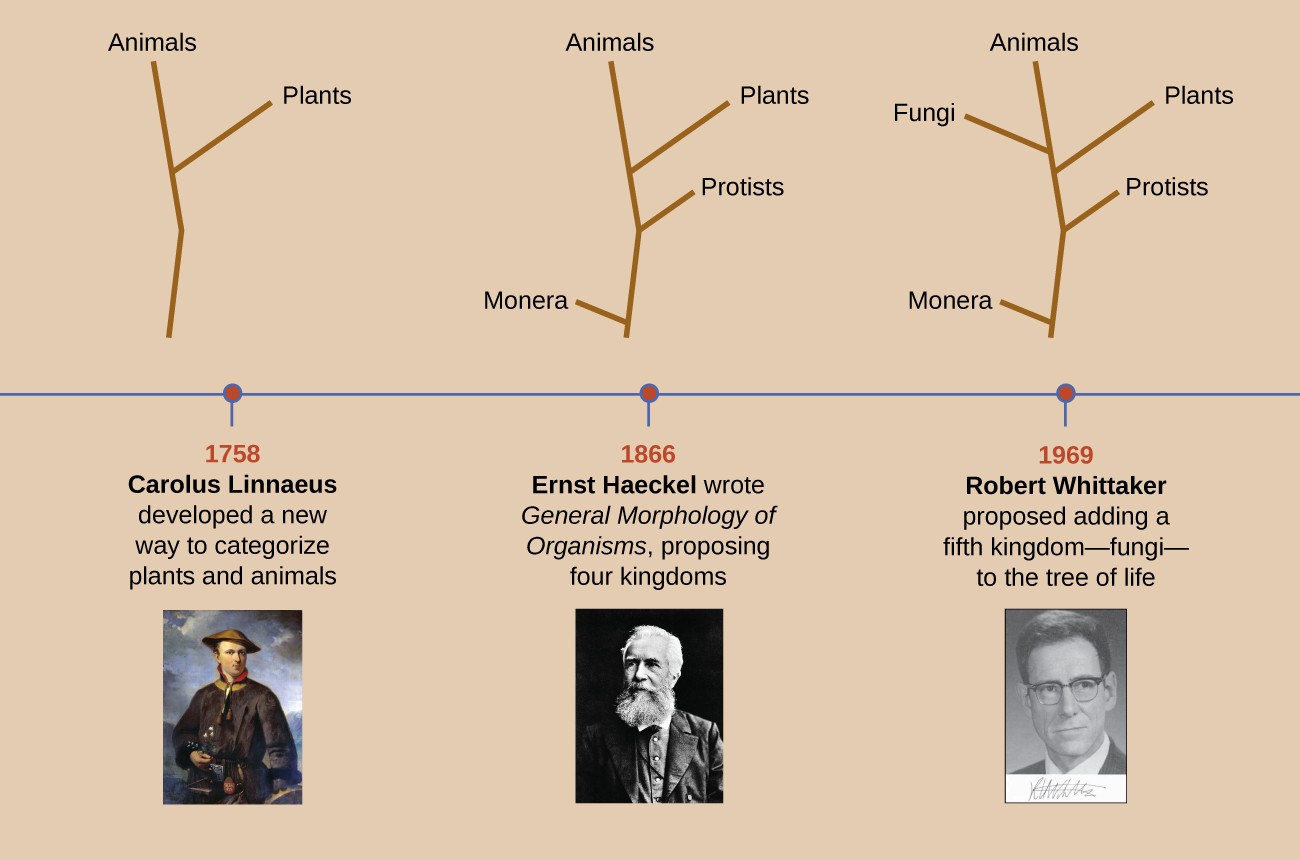 Figure 3. This timeline shows how the shape of the tree of life has changed over the centuries. Even today, the taxonomy of living organisms is continually being reevaluated and refined with advances in technology.

This example continues Cora’s story that started in What Our Ancestors Knew.

Antibiotic drugs are specifically designed to kill or inhibit the growth of bacteria. But after a couple of days on antibiotics, Cora shows no signs of improvement. Also, her CSF cultures came back from the lab negative. Since bacteria or fungi were not isolated from Cora’s CSF sample, her doctor rules out bacterial and fungal meningitis. Viral meningitis is still a possibility.

However, Cora now reports some troubling new symptoms. She is starting to have difficulty walking. Her muscle stiffness has spread from her neck to the rest of her body, and her limbs sometimes jerk involuntarily. In addition, Cora’s cognitive symptoms are worsening. At this point, Cora’s doctor becomes very concerned and orders more tests on the CSF samples.

The Role of Genetics in Modern Taxonomy

Haeckel’s and Whittaker’s trees presented hypotheses about the phylogeny of different organisms based on readily observable characteristics. But the advent of molecular genetics in the late 20th century revealed other ways to organize phylogenetic trees. Genetic methods allow for a standardized way to compare all living organisms without relying on observable characteristics that can often be subjective. Modern taxonomy relies heavily on comparing the nucleic acids (deoxyribonucleic acid [DNA] or ribonucleic acid [RNA]) or proteins from different organisms. The more similar the nucleic acids and proteins are between two organisms, the more closely related they are considered to be.

In the 1970s, American microbiologist Carl Woese discovered what appeared to be a “living record” of the evolution of organisms. He and his collaborator George Fox created a genetics-based tree of life based on similarities and differences they observed in the small subunit ribosomal RNA (rRNA) of different organisms. In the process, they discovered that a certain type of bacteria, called archaebacteria (now known simply as archaea), were significantly different from other bacteria and eukaryotes in terms of the sequence of small subunit rRNA. To accommodate this difference, they created a tree with three Domains above the level of Kingdom: Archaea, Bacteria, and Eukarya (Figure 4). Genetic analysis of the small subunit rRNA suggests archaea, bacteria, and eukaryotes all evolved from a common ancestral cell type. The tree is skewed to show a closer evolutionary relationship between Archaea and Eukarya than they have to Bacteria. 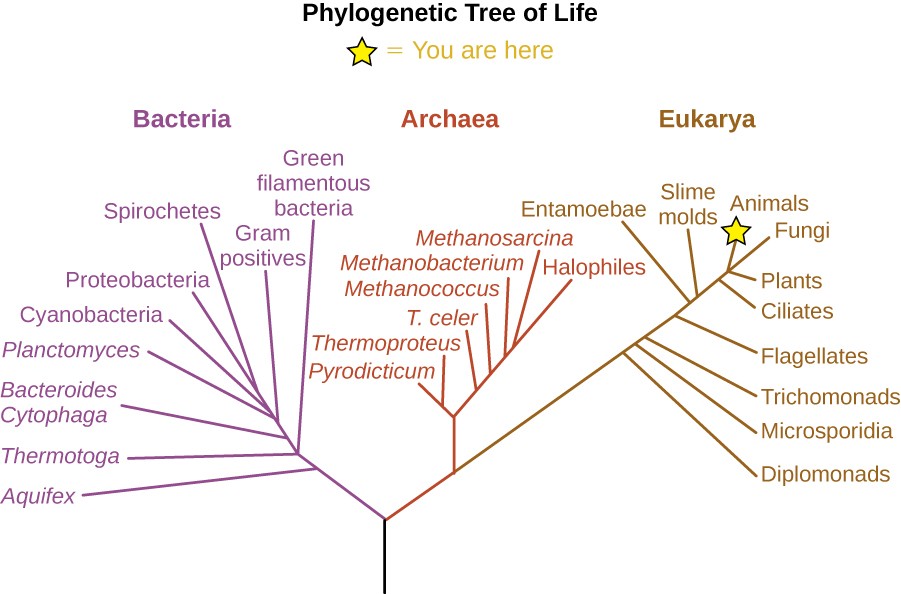 Scientists continue to use analysis of RNA, DNA, and proteins to determine how organisms are related. One interesting, and complicating, discovery is that of horizontal gene transfer—when a gene of one species is absorbed into another organism’s genome. Horizontal gene transfer is especially common in microorganisms and can make it difficult to determine how organisms are evolutionarily related. Consequently, some scientists now think in terms of “webs of life” rather than “trees of life.”

Taxonomic names in the 18th through 20th centuries were typically derived from Latin, since that was the common language used by scientists when taxonomic systems were first created. Today, newly discovered organisms can be given names derived from Latin, Greek, or English. Sometimes these names reflect some distinctive trait of the organism; in other cases, microorganisms are named after the scientists who discovered them. The archaeon Haloquadratum walsbyi is an example of both of these naming schemes. The genus, Haloquadratum, describes the microorganism’s saltwater habitat (halo is derived from the Greek word for “salt”) as well as the arrangement of its square cells, which are arranged in square clusters of four cells (quadratum is Latin for “foursquare”). The species, walsbyi, is named after Anthony Edward Walsby, the microbiologist who discovered Haloquadratum walsbyi in in 1980. While it might seem easier to give an organism a common descriptive name—like a red-headed woodpecker—we can imagine how that could become problematic. What happens when another species of woodpecker with red head coloring is discovered? The systematic nomenclature scientists use eliminates this potential problem by assigning each organism a single, unique two-word name that is recognized by scientists all over the world.

In this text, we will typically abbreviate an organism’s genus and species after its first mention. The abbreviated form is simply the first initial of the genus, followed by a period and the full name of the species. For example, the bacterium Escherichia coli is shortened to E. coli in its abbreviated form. You will encounter this same convention in other scientific texts as well.

Whether in a tree or a web, microbes can be difficult to identify and classify. Without easily observable macroscopic features like feathers, feet, or fur, scientists must capture, grow, and devise ways to study their biochemical properties to differentiate and classify microbes. Despite these hurdles, a group of microbiologists created and updated a set of manuals for identifying and classifying microorganisms. First published in 1923 and since updated many times, Bergey’s Manual of Determinative Bacteriology and Bergey’s Manual of Systematic Bacteriology are the standard references for identifying and classifying different prokaryotes. (Taxonomy of Clinically Relevant Microorganisms is partly based on Bergey’s manuals; it shows how the organisms that appear in this textbook are classified.) Because so many bacteria look identical, methods based on nonvisual characteristics must be used to identify them. For example, biochemical tests can be used to identify chemicals unique to certain species. Likewise, serological tests can be used to identify specific antibodies that will react against the proteins found in certain species. Ultimately, DNA and rRNA sequencing can be used both for identifying a particular bacterial species and for classifying newly discovered species.

Within one species of microorganism, there can be several subtypes called strains. While different strains may be nearly identical genetically, they can have very different attributes. The bacterium Escherichia coli is infamous for causing food poisoning and traveler’s diarrhea. However, there are actually many different strains of E. coli, and they vary in their ability to cause disease.

One pathogenic (disease-causing) E. coli strain that you may have heard of is E. coli O157:H7. In humans, infection from E. coli O157:H7 can cause abdominal cramps and diarrhea. Infection usually originates from contaminated water or food, particularly raw vegetables and undercooked meat. In the 1990s, there were several large outbreaks of E. coli O157:H7 thought to have originated in undercooked hamburgers.

While E. coli O157:H7 and some other strains have given E. coli a bad name, most E. coli strains do not cause disease. In fact, some can be helpful. Different strains of E. coli found naturally in our gut help us digest our food, provide us with some needed chemicals, and fight against pathogenic microbes.

Learn more about phylogenetic trees by exploring the Wellcome Trust’s interactive Tree of Life. The website contains information, photos, and animations about many different organisms. Select two organisms to see how they are evolutionarily related.

Which of the following was NOT a kingdom in Linnaeus’s taxonomy?

Show Answer
Answer b. Mineral is not a kingdom in Linnaeus’s taxonomy.

Which of the following is a correct usage of binomial nomenclature?

Which scientist proposed adding a kingdom for protists?

Which of the following is NOT a domain in Woese and Fox’s phylogenetic tree?

Show Answer
Answer a. Plantae is not a domain in Woese and Fox’s phylogenetic tree.

Which of the following is the standard resource for identifying bacteria?

Show Answer
Answer b. Bergey’s Manual of Determinative Bacteriology is the standard resource for identifying bacteria.

______ are microorganisms that are not included in phylogenetic trees because they are acellular.

Show Answer
Viruses are microorganisms that are not included in phylogenetic trees because they are acellular. 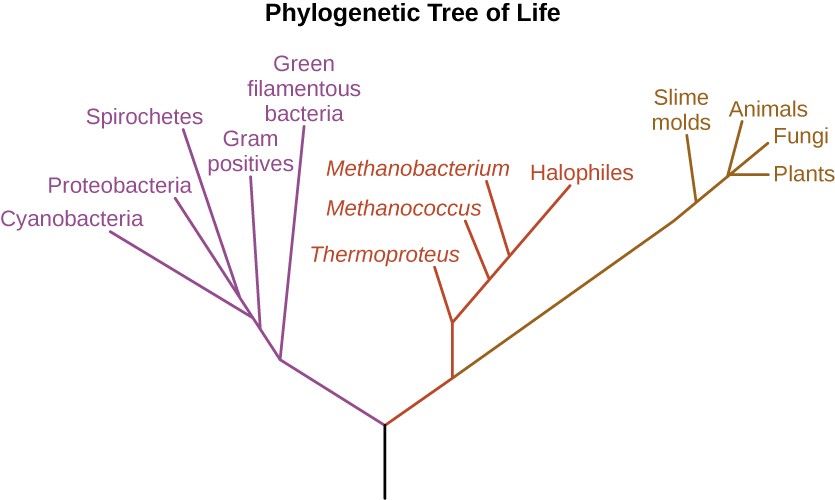