Anatomy and Normal Microbiota of the Respiratory Tract

Romelu, a 65-year-old man with asthma and type 2 diabetes, works as a sales associate at a local home improvement store. Recently, he began to feel quite ill and made an appointment with his family physician. At the clinic, Romelu reported experiencing headache, chest pain, coughing, and shortness of breath. Over the past day, he had also experienced some nausea and diarrhea. A nurse took his temperature and found that he was running a fever of 40 °C (104 °F).

Romelu suggested that he must have a case of influenza (flu), and regretted that he had put off getting his flu vaccine this year. After listening to Romelu’s breathing through a stethoscope, the physician ordered a chest radiography and collected blood, urine, and sputum samples.

The primary function of the respiratory tract is to exchange gases (oxygen and carbon dioxide) for metabolism. However, inhalation and exhalation (particularly when forceful) can also serve as a vehicle of transmission for pathogens between individuals.

Anatomy of the Upper Respiratory System

The respiratory system can be conceptually divided into upper and lower regions at the point of the epiglottis, the structure that seals off the lower respiratory system from the pharynx during swallowing (Figure 1). The upper respiratory system is in direct contact with the external environment. The nares (or nostrils) are the external openings of the nose that lead back into the nasal cavity, a large air-filled space behind the nares. These anatomical sites constitute the primary opening and first section of the respiratory tract, respectively. The nasal cavity is lined with hairs that trap large particles, like dust and pollen, and prevent their access to deeper tissues. The nasal cavity is also lined with a mucous membrane and Bowman’s glands that produce mucus to help trap particles and microorganisms for removal. The nasal cavity is connected to several other air-filled spaces. The sinuses, a set of four, paired small cavities in the skull, communicate with the nasal cavity through a series of small openings. The nasopharynx is part of the upper throat extending from the posterior nasal cavity. The nasopharynx carries air inhaled through the nose. The middle ear is connected to the nasopharynx through the eustachian tube. The middle ear is separated from the outer ear by the tympanic membrane, or ear drum. And finally, the lacrimal glands drain to the nasal cavity through the nasolacrimal ducts (tear ducts). The open connections between these sites allow microorganisms to move from the nasal cavity to the sinuses, middle ears (and back), and down into the lower respiratory tract from the nasopharynx.

Anatomy of the Lower Respiratory System

The lower respiratory system begins below the epiglottis in the larynx or voice box (Figure 2). The trachea, or windpipe, is a cartilaginous tube extending from the larynx that provides an unobstructed path for air to reach the lungs. The trachea bifurcates into the left and right bronchi as it reaches the lungs. These paths branch repeatedly to form smaller and more extensive networks of tubes, the bronchioles. The terminal bronchioles formed in this tree-like network end in cul-de-sacs called the alveoli. These structures are surrounded by capillary networks and are the site of gas exchange in the respiratory system. Human lungs contain on the order of 400,000,000 alveoli. The outer surface of the lungs is protected with a double-layered pleural membrane. This structure protects the lungs and provides lubrication to permit the lungs to move easily during respiration. 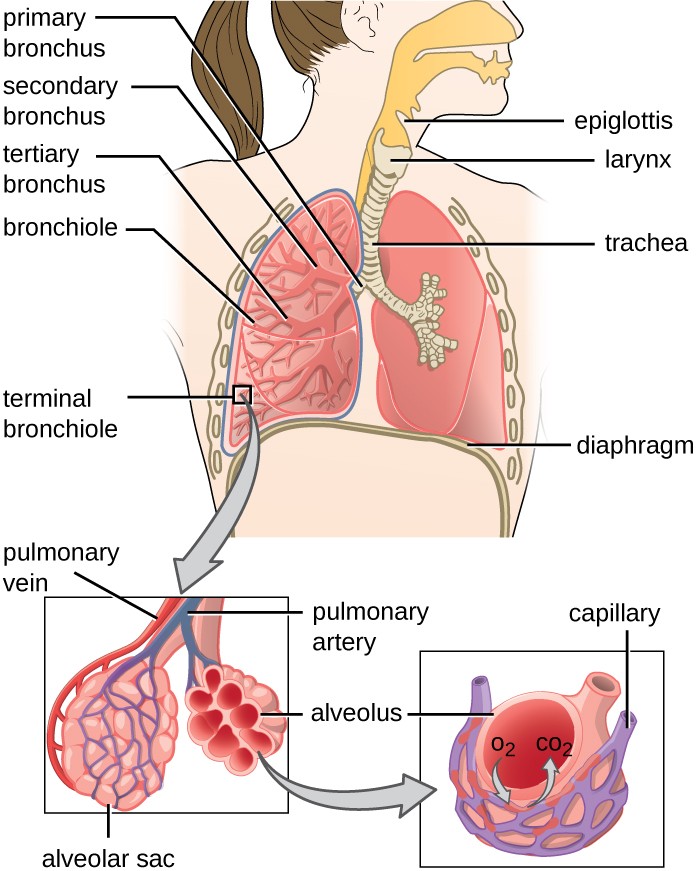 Figure 2. The structures of the lower respiratory tract are identified in this illustration. (credit: modification of work by National Cancer Institute)

Defenses of the Respiratory System

The inner lining of the respiratory system consists of mucous membranes (Figure 3) and is protected by multiple immune defenses. The goblet cells within the respiratory epithelium secrete a layer of sticky mucus. The viscosity and acidity of this secretion inhibits microbial attachment to the underlying cells. In addition, the respiratory tract contains ciliated epithelial cells. The beating cilia dislodge and propel the mucus, and any trapped microbes, upward to the epiglottis, where they will be swallowed. Elimination of microbes in this manner is referred to as the mucociliary escalator effect and is an important mechanism that prevents inhaled microorganisms from migrating further into the lower respiratory tract. 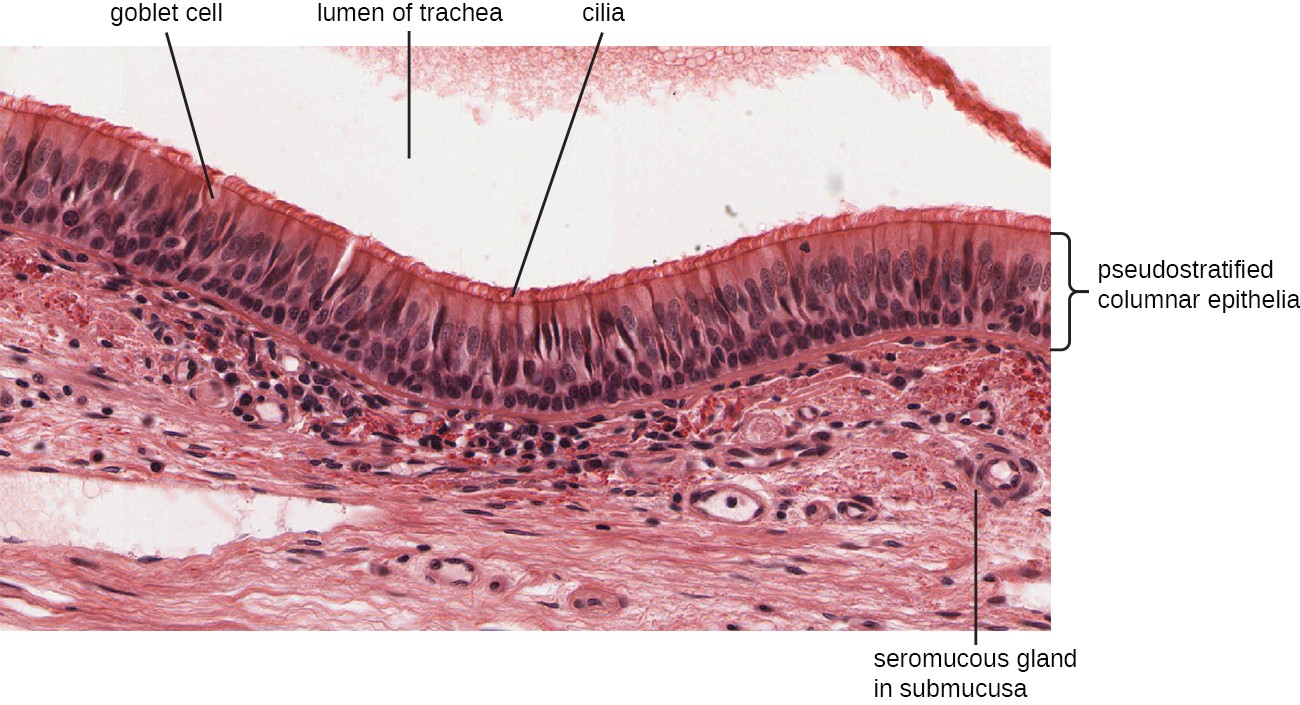 Figure 3. This micrograph shows the structure of the mucous membrane of the respiratory tract. (credit: modification of micrograph provided by the Regents of University of Michigan Medical School © 2012)

The upper respiratory system is under constant surveillance by mucosa-associated lymphoid tissue (MALT), including the adenoids and tonsils. Other mucosal defenses include secreted antibodies (IgA), lysozyme, surfactant, and antimicrobial peptides called defensins. Meanwhile, the lower respiratory tract is protected by alveolar macrophages. These phagocytes efficiently kill any microbes that manage to evade the other defenses. The combined action of these factors renders the lower respiratory tract nearly devoid of colonized microbes.

Normal Microbiota of the Respiratory System

The upper respiratory tract contains an abundant and diverse microbiota. The nasal passages and sinuses are primarily colonized by members of the Firmicutes, Actinobacteria, and Proteobacteria. The most common bacteria identified include Staphylococcus epidermidis, viridans group streptococci (VGS), Corynebacterium spp. (diphtheroids), Propionibacterium spp., and Haemophilus spp. The oropharynx includes many of the same isolates as the nose and sinuses, with the addition of variable numbers of bacteria like species of Prevotella, Fusobacterium, Moraxella, and Eikenella, as well as some Candida fungal isolates. In addition, many healthy humans asymptomatically carry potential pathogens in the upper respiratory tract. As much as 20% of the population carry Staphylococcus aureus in their nostrils.[1] The pharynx, too, can be colonized with pathogenic strains of Streptococcus, Haemophilus, and Neisseria.

Many members of the respiratory system’s normal microbiota are opportunistic pathogens. To proliferate and cause host damage, they first must overcome the immune defenses of respiratory tissues. Many mucosal pathogens produce virulence factors such as adhesins that mediate attachment to host epithelial cells, or polysaccharide capsules that allow microbes to evade phagocytosis. The endotoxins of gram-negative bacteria can stimulate a strong inflammatory response that damages respiratory cells. Other pathogens produce exotoxins, and still others have the ability to survive within the host cells. Once an infection of the respiratory tract is established, it tends to impair the mucociliary escalator, limiting the body’s ability to expel the invading microbes, thus making it easier for pathogens to multiply and spread.

Vaccines have been developed for many of the most serious bacterial and viral pathogens. Several of the most important respiratory pathogens and their vaccines, if available, are summarized in Table 1. Components of these vaccines will be explained later in the chapter.

Signs and Symptoms of Respiratory Infection

Microbial diseases of the respiratory system typically result in an acute inflammatory response. These infections can be grouped by the location affected and have names ending in “itis,” which literally means inflammation of. For instance, rhinitis is an inflammation of the nasal cavities, often characteristic of the common cold. Rhinitis may also be associated with hay fever allergies or other irritants. Inflammation of the sinuses is called sinusitis inflammation of the ear is called otitis. Otitis media is an inflammation of the middle ear. A variety of microbes can cause pharyngitis, commonly known as a sore throat. An inflammation of the larynx is called laryngitis. The resulting inflammation may interfere with vocal cord function, causing voice loss. When tonsils are inflamed, it is called tonsillitis. Chronic cases of tonsillitis may be treated surgically with tonsillectomy. More rarely, the epiglottis can be infected, a condition called epiglottitis. In the lower respiratory system, the inflammation of the bronchial tubes results in bronchitis. Most serious of all is pneumonia, in which the alveoli in the lungs are infected and become inflamed. Pus and edema accumulate and fill the alveoli with fluids (called consolidations). This reduces the lungs’ ability to exchange gases and often results in a productive cough expelling phlegm and mucus. Cases of pneumonia can range from mild to life-threatening, and remain an important cause of mortality in the very young and very old.

Camila is a 22-year-old student who has been a chronic smoker for 5 years. Recently, she developed a persistent cough that has not responded to over-the-counter treatments. Her doctor ordered a chest radiograph to investigate. The radiological results were consistent with pneumonia. In addition, Streptococcus pneumoniae was isolated from Camila’s sputum.

Smokers are at a greater risk of developing pneumonia than the general population. Several components of tobacco smoke have been demonstrated to impair the lungs’ immune defenses. These effects include disrupting the function of the ciliated epithelial cells, inhibiting phagocytosis, and blocking the action of antimicrobial peptides. Together, these lead to a dysfunction of the mucociliary escalator effect. The organisms trapped in the mucus are therefore able to colonize the lungs and cause infections rather than being expelled or swallowed.

Which of the following is not directly connected to the nasopharynx?

Show Answer
Answer c. Lacrimal glands are not directly connected to the nasopharynx.

What type of cells produce the mucus for the mucous membranes?

Show Answer
Answer a. Goblet cells produce the mucus for the mucous membranes.

Which of these correctly orders the structures through which air passes during inhalation?

Which microbial virulence factor is most important for attachment to host respiratory tissues?

Show Answer
Answer a. Adhesins are the most important factor for attachment to host respiratory tissues.

Unattached microbes are moved from the lungs to the epiglottis by the ___________ effect.

Show Answer
Unattached microbes are moved from the lungs to the epiglottis by the mucociliary escalator effect.

Show Answer
The main type of antibody in the mucous membrane defenses is IgA.

Show Answer
Laryngitis results from an inflammation of the “voice box.” 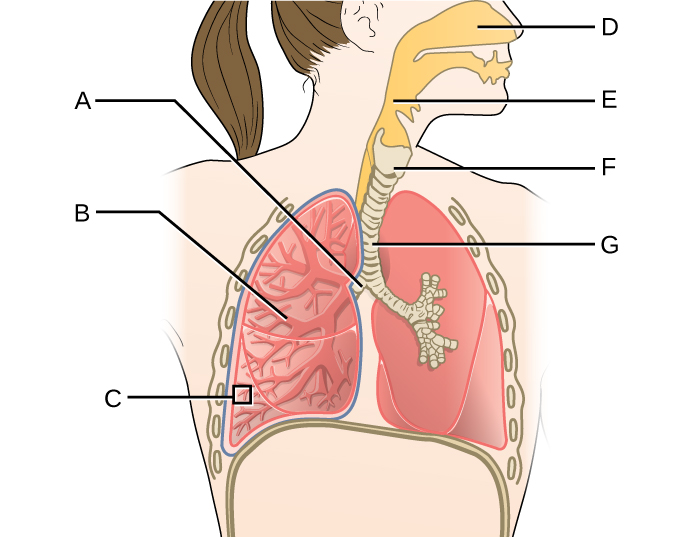