Anatomy and Normal Microbiota of the Skin and Eyes

Sam, a college freshman with a bad habit of oversleeping, nicked himself shaving in a rush to get to class on time. At the time, he didn’t think twice about it. But two days later, he noticed the cut was surrounded by a reddish area of skin that was warm to the touch. When the wound started oozing pus, he decided he had better stop by the university’s clinic. The doctor took a sample from the lesion and then cleaned the area.

Human skin is an important part of the innate immune system. In addition to serving a wide range of other functions, the skin serves as an important barrier to microbial invasion. Not only is it a physical barrier to penetration of deeper tissues by potential pathogens, but it also provides an inhospitable environment for the growth of many pathogens. In this section, we will provide a brief overview of the anatomy and normal microbiota of the skin and eyes, along with general symptoms associated with skin and eye infections.

Human skin is made up of several layers and sublayers. The two main layers are the epidermis and the dermis. These layers cover a third layer of tissue called the hypodermis, which consists of fibrous and adipose connective tissue (Figure 1).

The epidermis is the outermost layer of the skin, and it is relatively thin. The exterior surface of the epidermis, called the stratum corneum, primarily consists of dead skin cells. This layer of dead cells limits direct contact between the outside world and live cells. The stratum corneum is rich in keratin, a tough, fibrous protein that is also found in hair and nails. Keratin helps make the outer surface of the skin relatively tough and waterproof. It also helps to keep the surface of the skin dry, which reduces microbial growth. However, some microbes are still able to live on the surface of the skin, and some of these can be shed with dead skin cells in the process of desquamation, which is the shedding and peeling of skin that occurs as a normal process but that may be accelerated when infection is present.

Beneath the epidermis lies a thicker skin layer called the dermis. The dermis contains connective tissue and embedded structures such as blood vessels, nerves, and muscles. Structures called hair follicles (from which hair grows) are located within the dermis, even though much of their structure consists of epidermal tissue. The dermis also contains the two major types of glands found in human skin: sweat glands (tubular glands that produce sweat) and sebaceous glands (which are associated with hair follicles and produce sebum, a lipid-rich substance containing proteins and minerals).

Perspiration (sweat) provides some moisture to the epidermis, which can increase the potential for microbial growth. For this reason, more microbes are found on the regions of the skin that produce the most sweat, such as the skin of the underarms and groin. However, in addition to water, sweat also contains substances that inhibit microbial growth, such as salts, lysozyme, and antimicrobial peptides. Sebum also serves to protect the skin and reduce water loss. Although some of the lipids and fatty acids in sebum inhibit microbial growth, sebum contains compounds that provide nutrition for certain microbes. 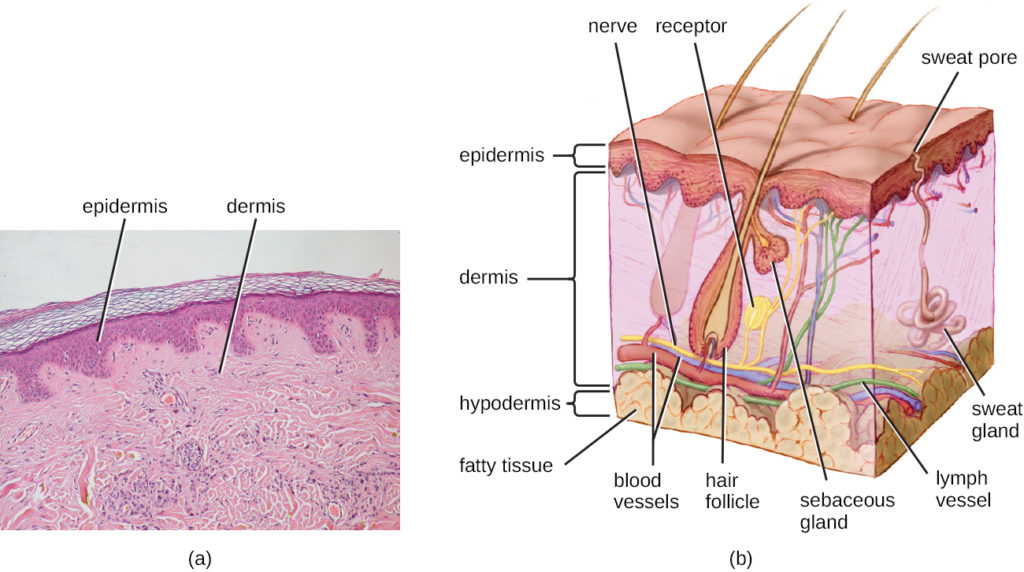 Figure 1. (a) A micrograph of a section through human skin shows the epidermis and dermis. (b) The major layers of human skin are the epidermis, dermis, and hypodermis. (credit b: modification of work by National Cancer Institute)

Normal Microbiota of the Skin

The skin is home to a wide variety of normal microbiota, consisting of commensal organisms that derive nutrition from skin cells and secretions such as sweat and sebum. The normal microbiota of skin tends to inhibit transient-microbe colonization by producing antimicrobial substances and outcompeting other microbes that land on the surface of the skin. This helps to protect the skin from pathogenic infection.

The skin’s properties differ from one region of the body to another, as does the composition of the skin’s microbiota. The availability of nutrients and moisture partly dictates which microorganisms will thrive in a particular region of the skin. Relatively moist skin, such as that of the nares (nostrils) and underarms, has a much different microbiota than the dryer skin on the arms, legs, hands, and top of the feet. Some areas of the skin have higher densities of sebaceous glands. These sebum-rich areas, which include the back, the folds at the side of the nose, and the back of the neck, harbor distinct microbial communities that are less diverse than those found on other parts of the body.

Different types of bacteria dominate the dry, moist, and sebum-rich regions of the skin. The most abundant microbes typically found in the dry and sebaceous regions are Betaproteobacteria and Propionibacteria, respectively. In the moist regions, Corynebacterium and Staphylococcus are most commonly found (Figure 2). Viruses and fungi are also found on the skin, with Malassezia being the most common type of fungus found as part of the normal microbiota. The role and populations of viruses in the microbiota, known as viromes, are still not well understood, and there are limitations to the techniques used to identify them. However, Circoviridae, Papillomaviridae, and Polyomaviridae appear to be the most common residents in the healthy skin virome.[1] [2] [3] 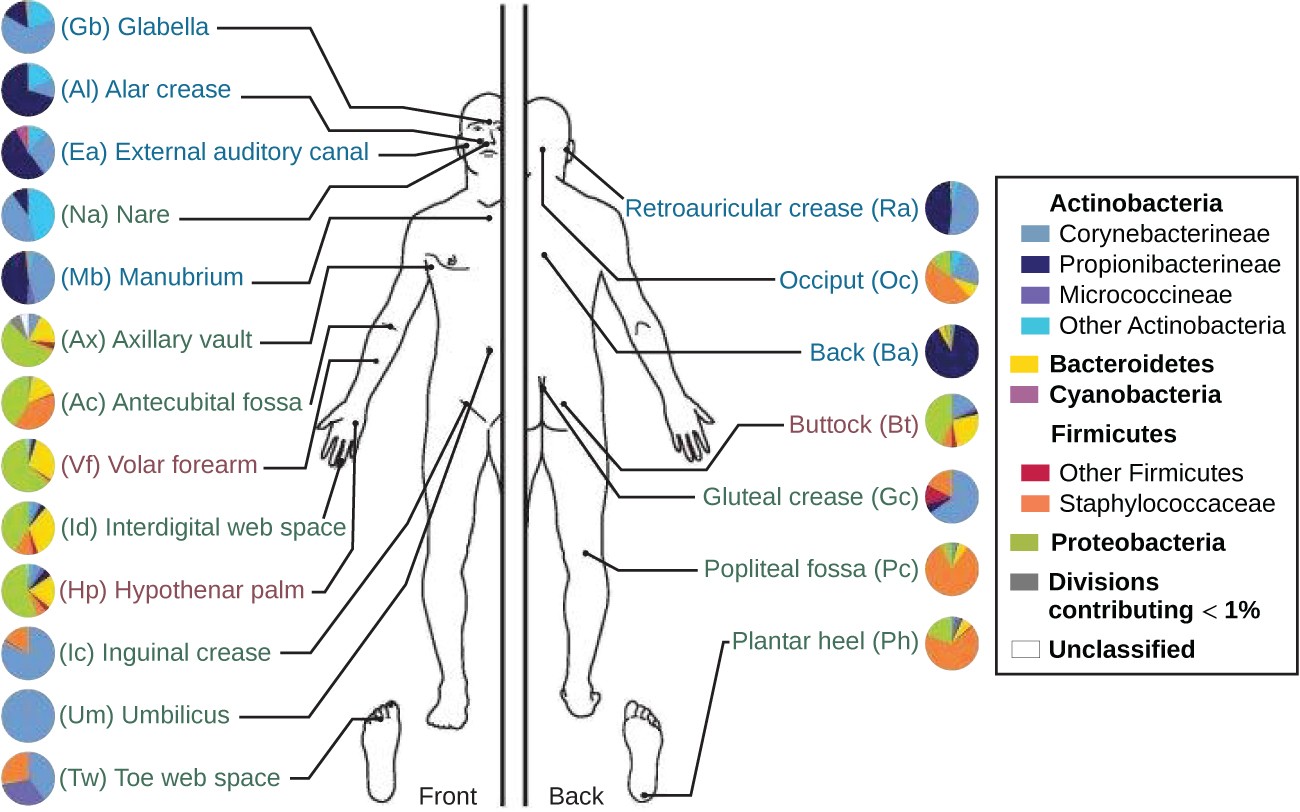 Figure 2. The normal microbiota varies on different regions of the skin, especially in dry versus moist areas. The figure shows the major organisms commonly found in different locations of a healthy individual’s skin and external mucosa. Note that there is significant variation among individuals. (credit: modification of work by National Human Genome Research Institute)

Infections of the Skin

While the microbiota of the skin can play a protective role, it can also cause harm in certain cases. Often, an opportunistic pathogen residing in the skin microbiota of one individual may be transmitted to another individual more susceptible to an infection. For example, methicillin-resistant Staphylococcus aureus (MRSA) can often take up residence in the nares of health care workers and hospital patients; though harmless on intact, healthy skin, MRSA can cause infections if introduced into other parts of the body, as might occur during surgery or via a post-surgical incision or wound. This is one reason why clean surgical sites are so important.

Injury or damage to the skin can allow microbes to enter deeper tissues, where nutrients are more abundant and the environment is more conducive to bacterial growth. Wound infections are common after a puncture or laceration that damages the physical barrier of the skin. Microbes may infect structures in the dermis, such as hair follicles and glands, causing a localized infection, or they may reach the bloodstream, which can lead to a systemic infection.

In some cases, infectious microbes can cause a variety of rashes or lesions that differ in their physical characteristics. These rashes can be the result of inflammation reactions or direct responses to toxins produced by the microbes. Table 1 lists some of the medical terminology used to describe skin lesions and rashes based on their characteristics; Figure 3 and Figure 4 illustrate some of the various types of skin lesions. It is important to note that many different diseases can lead to skin conditions of very similar appearance; thus the terms used in the table are generally not exclusive to a particular type of infection or disease.

Figure 3. (a) Acne is a bacterial infection of the skin that manifests as a rash of inflamed hair follicles (folliculitis). The large whitehead near the center of the cheek is an infected hair follicle that has become purulent (or suppurative), leading to the formation of a furuncle. (b) An abscess is a pus-filled lesion. (credit b: modification of work by Bruce Blaus) 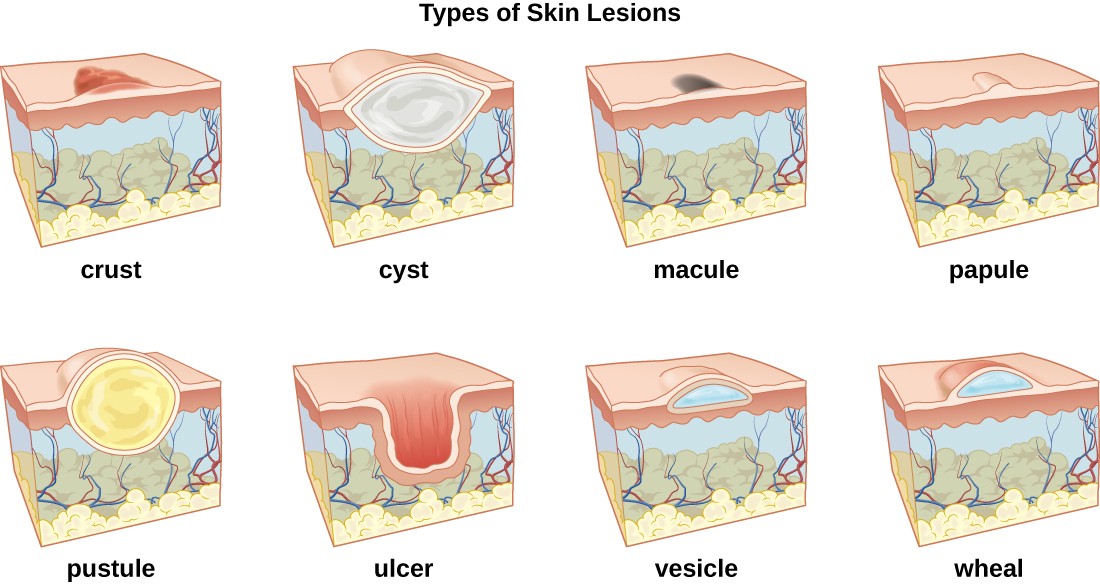 Figure 4. Numerous causes can lead to skin lesions of various types, some of which are very similar in appearance. (credit: modification of work by Bruce Blaus)

Anatomy and Microbiota of the Eye 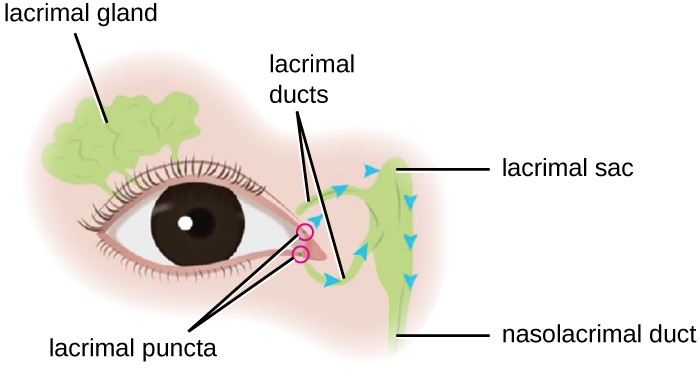 Figure 5. The lacrimal apparatus includes the structures of the eye associated with tear production and drainage. (credit: modification of work by “Evidence Based Medical Educator Inc.”/YouTube)

Although the eye and skin have distinct anatomy, they are both in direct contact with the external environment. An important component of the eye is the nasolacrimal drainage system, which serves as a conduit for the fluid of the eye, called tears. Tears flow from the external eye to the nasal cavity by the lacrimal apparatus, which is composed of the structures involved in tear production (Figure 5). The lacrimal gland, above the eye, secretes tears to keep the eye moist. There are two small openings, one on the inside edge of the upper eyelid and one on the inside edge of the lower eyelid, near the nose. Each of these openings is called a lacrimal punctum. Together, these lacrimal puncta collect tears from the eye that are then conveyed through lacrimal ducts to a reservoir for tears called the lacrimal sac, also known as the dacrocyst or tear sac.

From the sac, tear fluid flows via a nasolacrimal duct to the inner nose. Each nasolacrimal duct is located underneath the skin and passes through the bones of the face into the nose. Chemicals in tears, such as defensins, lactoferrin, and lysozyme, help to prevent colonization by pathogens. In addition, mucins facilitate removal of microbes from the surface of the eye.

The surfaces of the eyeball and inner eyelid are mucous membranes called conjunctiva. The normal conjunctival microbiota has not been well characterized, but does exist. One small study (part of the Ocular Microbiome project) found twelve genera that were consistently present in the conjunctiva.[4] These microbes are thought to help defend the membranes against pathogens. However, it is still unclear which microbes may be transient and which may form a stable microbiota.[5]

The watery material inside of the eyeball is called the vitreous humor. Unlike the conjunctiva, it is protected from contact with the environment and is almost always sterile, with no normal microbiota (Figure 6). 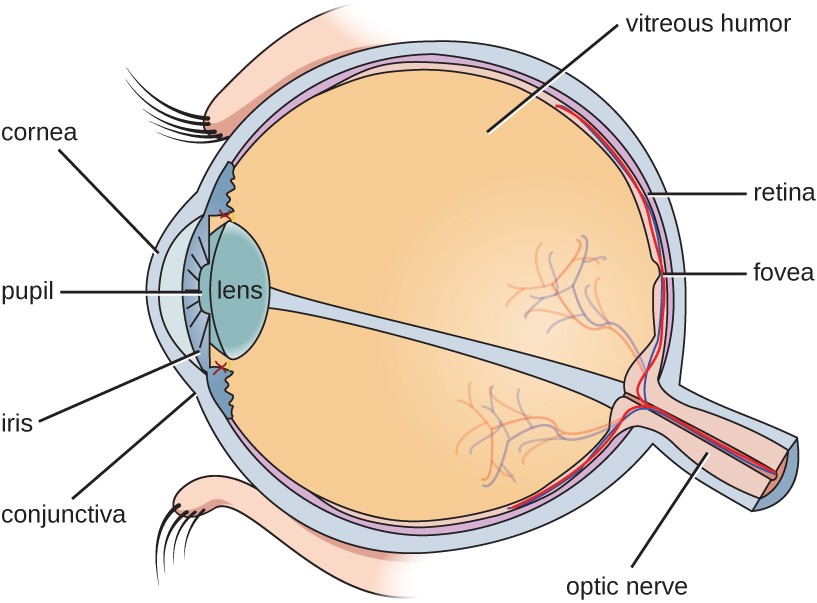 Figure 6. Some microbes live on the conjunctiva of the human eye, but the vitreous humor is sterile.

Infections of the Eye

Infections leading to conjunctivitis, blepharitis, keratoconjunctivitis, or dacryocystitis may be caused by bacteria or viruses, but allergens, pollutants, or chemicals can also irritate the eye and cause inflammation of various structures. Viral infection is a more likely cause of conjunctivitis in cases with symptoms such as fever and watery discharge that occurs with upper respiratory infection and itchy eyes. Table 2 summarizes some common forms of conjunctivitis and blepharitis.

_____________ glands produce a lipid-rich substance that contains proteins and minerals and protects the skin.

Which layer of skin contains living cells, is vascularized, and lies directly above the hypodermis?

Show Answer
Answer b. The dermis contains living cells, is vascularized, and lies directly above the hypodermis.

Show Answer
The stratum corneum is the outermost layer of the epidermis.

The mucous membrane that covers the surface of the eyeball and inner eyelid is called the ________.

Show Answer
The mucous membrane that covers the surface of the eyeball and inner eyelid is called the conjunctiva.