B Lymphocytes and Humoral Immunity

Humoral immunity refers to mechanisms of the adaptive immune defenses that are mediated by antibodies secreted by B lymphocytes, or B cells. This section will focus on B cells and discuss their production and maturation, receptors, and mechanisms of activation.

B Cell Production and Maturation

The first step of B cell maturation is an assessment of the functionality of their antigen-binding receptors. This occurs through positive selection for B cells with normal functional receptors. A mechanism of negative selection is then used to eliminate self-reacting B cells and minimize the risk of autoimmunity. Negative selection of self-reacting B cells can involve elimination by apoptosis, editing or modification of the receptors so they are no longer self-reactive, or induction of anergy in the B cell. Immature B cells that pass the selection in the bone marrow then travel to the spleen for their final stages of maturation. There they become naïve mature B cells, i.e., mature B cells that have not yet been activated. 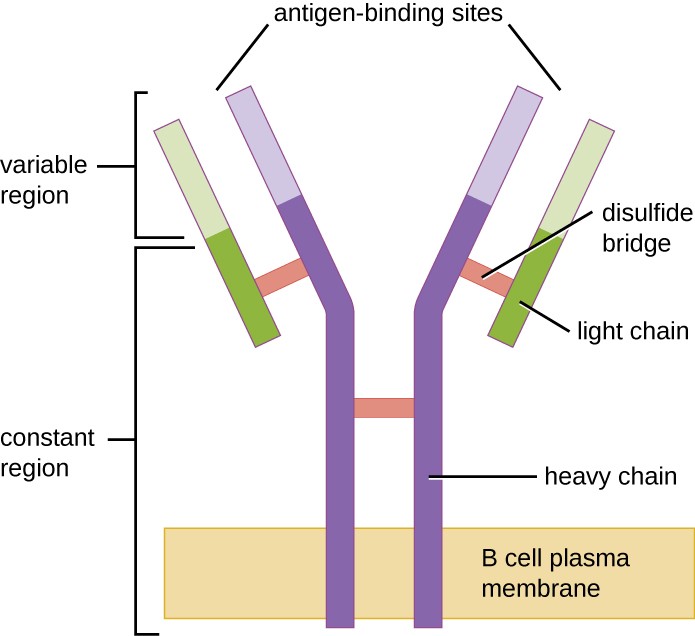 Figure 1. B-cell receptors are embedded in the membranes of B cells. The variable regions of all of the receptors on a single cell bind the same specific antigen.

Like T cells, B cells possess antigen-specific receptors with diverse specificities. Although they rely on T cells for optimum function, B cells can be activated without help from T cells. B-cell receptors (BCRs) for naïve mature B cells are membrane-bound monomeric forms of IgD and IgM. They have two identical heavy chains and two identical light chains connected by disulfide bonds into a basic “Y” shape (Figure 1). The trunk of the Y-shaped molecule, the constant region of the two heavy chains, spans the B cell membrane. The two antigen-binding sites exposed to the exterior of the B cell are involved in the binding of specific pathogen epitopes to initiate the activation process. It is estimated that each naïve mature B cell has upwards of 100,000 BCRs on its membrane, and each of these BCRs has an identical epitope-binding specificity.

One important difference between BCRs and TCRs is the way they can interact with antigenic epitopes. Whereas TCRs can only interact with antigenic epitopes that are presented within the antigen-binding cleft of MHC I or MHC II, BCRs do not require antigen presentation with MHC; they can interact with epitopes on free antigens or with epitopes displayed on the surface of intact pathogens. Another important difference is that TCRs only recognize protein epitopes, whereas BCRs can recognize epitopes associated with different molecular classes (e.g., proteins, polysaccharides, lipopolysaccharides).

Activation of B cells occurs through different mechanisms depending on the molecular class of the antigen. Activation of a B cell by a protein antigen requires the B cell to function as an APC, presenting the protein epitopes with MHC II to helper T cells. Because of their dependence on T cells for activation of B cells, protein antigens are classified as T-dependent antigens. In contrast, polysaccharides, lipopolysaccharides, and other nonprotein antigens are considered T-independent antigens because they can activate B cells without antigen processing and presentation to T cells.

T Cell-Independent Activation of B cells

Activation of B cells without the cooperation of helper T cells is referred to as T cell-independent activation and occurs when BCRs interact with T-independent antigens. T-independent antigens (e.g., polysaccharide capsules, lipopolysaccharide) have repetitive epitope units within their structure, and this repetition allows for the cross-linkage of multiple BCRs, providing the first signal for activation (Figure 2). Because T cells are not involved, the second signal has to come from other sources, such as interactions of toll-like receptors with PAMPs or interactions with factors from the complement system.

Once a B cell is activated, it undergoes clonal proliferation and daughter cells differentiate into plasma cells. Plasma cells are antibody factories that secrete large quantities of antibodies. After differentiation, the surface BCRs disappear and the plasma cell secretes pentameric IgM molecules that have the same antigen specificity as the BCRs (Figure 2).

Figure 2. T-independent antigens have repeating epitopes that can induce B cell recognition and activation without involvement from T cells. A second signal, such as interaction of TLRs with PAMPs (not shown), is also required for activation of the B cell. Once activated, the B cell proliferates and differentiates into antibody-secreting plasma cells.

T Cell-Dependent Activation of B cells 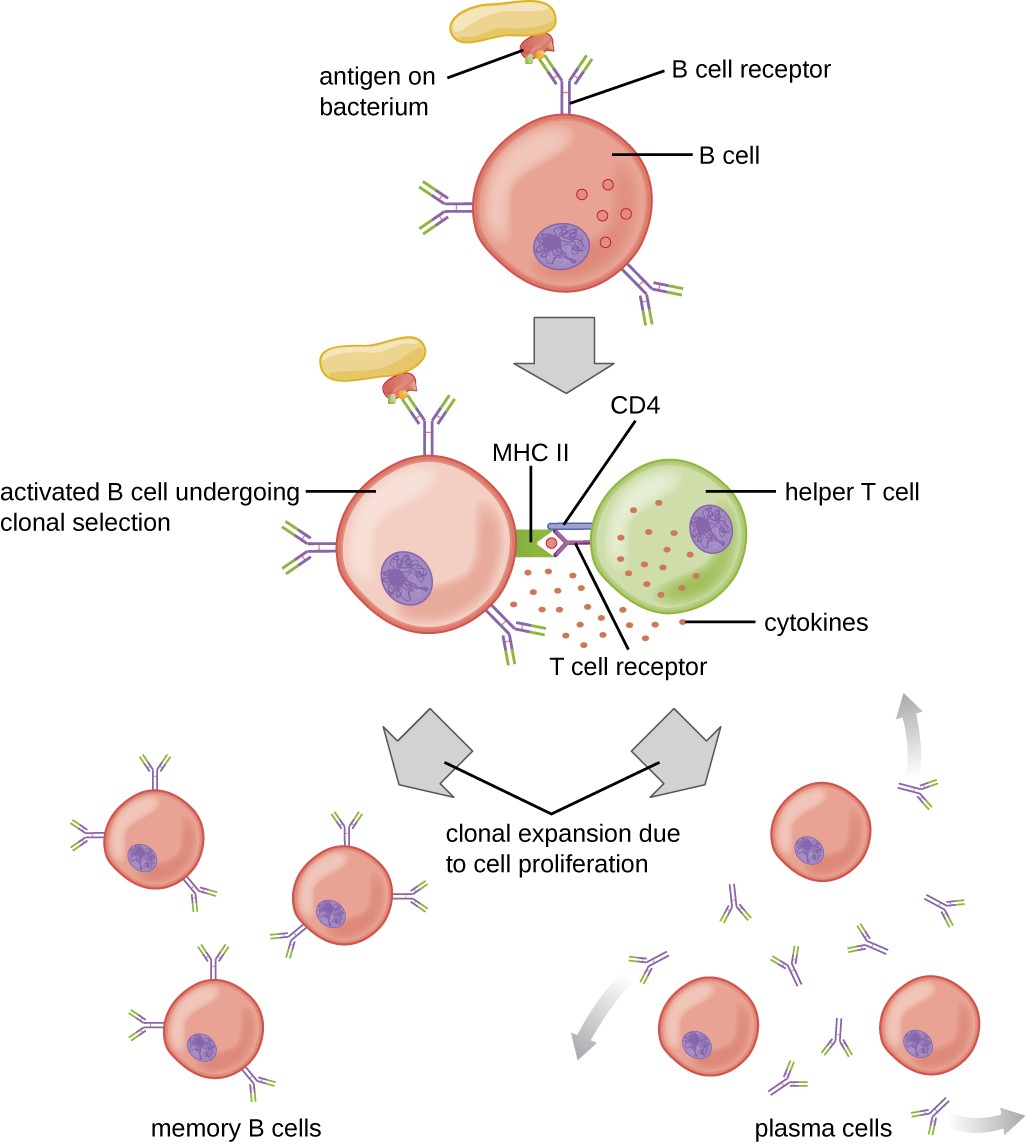 Figure 3. Click for a larger image. In T cell-dependent activation of B cells, the B cell recognizes and internalizes an antigen and presents it to a helper T cell that is specific to the same antigen. The helper T cell interacts with the antigen presented by the B cell, which activates the T cell and stimulates the release of cytokines that then activate the B cell. Activation of the B cell triggers proliferation and differentiation into B cells and plasma cells.

T cell-dependent activation of B cells is more complex than T cell-independent activation, but the resulting immune response is stronger and develops memory. T cell-dependent activation can occur either in response to free protein antigens or to protein antigens associated with an intact pathogen. Interaction between the BCRs on a naïve mature B cell and a free protein antigen stimulate internalization of the antigen, whereas interaction with antigens associated with an intact pathogen initiates the extraction of the antigen from the pathogen before internalization. Once internalized inside the B cell, the protein antigen is processed and presented with MHC II. The presented antigen is then recognized by helper T cells specific to the same antigen. The TCR of the helper T cell recognizes the foreign antigen, and the T cell’s CD4 molecule interacts with MHC II on the B cell. The coordination between B cells and helper T cells that are specific to the same antigen is referred to as linked recognition.

Once activated by linked recognition, TH2 cells produce and secrete cytokines that activate the B cell and cause proliferation into clonal daughter cells. After several rounds of proliferation, additional cytokines provided by the TH2 cells stimulate the differentiation of activated B cell clones into memory B cells, which will quickly respond to subsequent exposures to the same protein epitope, and plasma cells that lose their membrane BCRs and initially secrete pentameric IgM (Figure 3).

After initial secretion of IgM, cytokines secreted by TH2 cells stimulate the plasma cells to switch from IgM production to production of IgG, IgA, or IgE. This process, called class switching or isotype switching, allows plasma cells cloned from the same activated B cell to produce a variety of antibody classes with the same epitope specificity. Class switching is accomplished by genetic rearrangement of gene segments encoding the constant region, which determines an antibody’s class. The variable region is not changed, so the new class of antibody retains the original epitope specificity.

T cell-dependent activation of B cells plays an important role in both the primary and secondary responses associated with adaptive immunity. With the first exposure to a protein antigen, a T cell-dependent primary antibody response occurs. The initial stage of the primary response is a lag period, or latent period, of approximately 10 days, during which no antibody can be detected in serum. This lag period is the time required for all of the steps of the primary response, including naïve mature B cell binding of antigen with BCRs, antigen processing and presentation, helper T cell activation, B cell activation, and clonal proliferation. The end of the lag period is characterized by a rise in IgM levels in the serum, as TH2 cells stimulate B cell differentiation into plasma cells. IgM levels reach their peak around 14 days after primary antigen exposure; at about this same time, TH2 stimulates antibody class switching, and IgM levels in serum begin to decline. Meanwhile, levels of IgG increase until they reach a peak about three weeks into the primary response (Figure 4).

Which of the following would be a T-dependent antigen?

Which of the following would be a BCR?

Which of the following does not occur during the lag period of the primary antibody response?

Show Answer
Answer b. Class switching to IgG does not occur during the lag period of the primary antibody response.

T-independent antigens can stimulate B cells to become activated and secrete antibodies without assistance from helper T cells. These antigens possess ________ antigenic epitopes that cross-link BCRs.

A patient lacks the ability to make functioning T cells because of a genetic disorder. Would this patient’s B cells be able to produce antibodies in response to an infection? Explain your answer.