Energy flows directionally through ecosystems, entering as sunlight for phototrophs or as inorganic molecules for chemoautotrophs. The six most common elements associated with organic molecules—carbon, hydrogen, nitrogen, oxygen, phosphorus, and sulfur—take a variety of chemical forms and may exist for long periods in the atmosphere, on land, in water, or beneath earth’s surface. Geologic processes, such as erosion, water drainage, the movement of the continental plates, and weathering, all are involved in the cycling of elements on earth. Because geology and chemistry have major roles in the study of this process, the recycling of inorganic matter between living organisms and their nonliving environment is called a biogeochemical cycle. Here, we will focus on the function of microorganisms in these cycles, which play roles at each step, most frequently interconverting oxidized versions of molecules with reduced ones.

Carbon is one of the most important elements to living organisms, as shown by its abundance and presence in all organic molecules. The carbon cycle exemplifies the connection between organisms in various ecosystems. Carbon is exchanged between heterotrophs and autotrophs within and between ecosystems primarily by way of atmospheric CO2, a fully oxidized version of carbon that serves as the basic building block that autotrophs use to build multicarbon, high-energy organic molecules such as glucose. Photoautotrophs and chemoautotrophs harness energy from the sun and from inorganic chemical compounds, respectively, to covalently bond carbon atoms together into reduced organic compounds whose energy can be later accessed through the processes of respiration and fermentation (Figure 1). 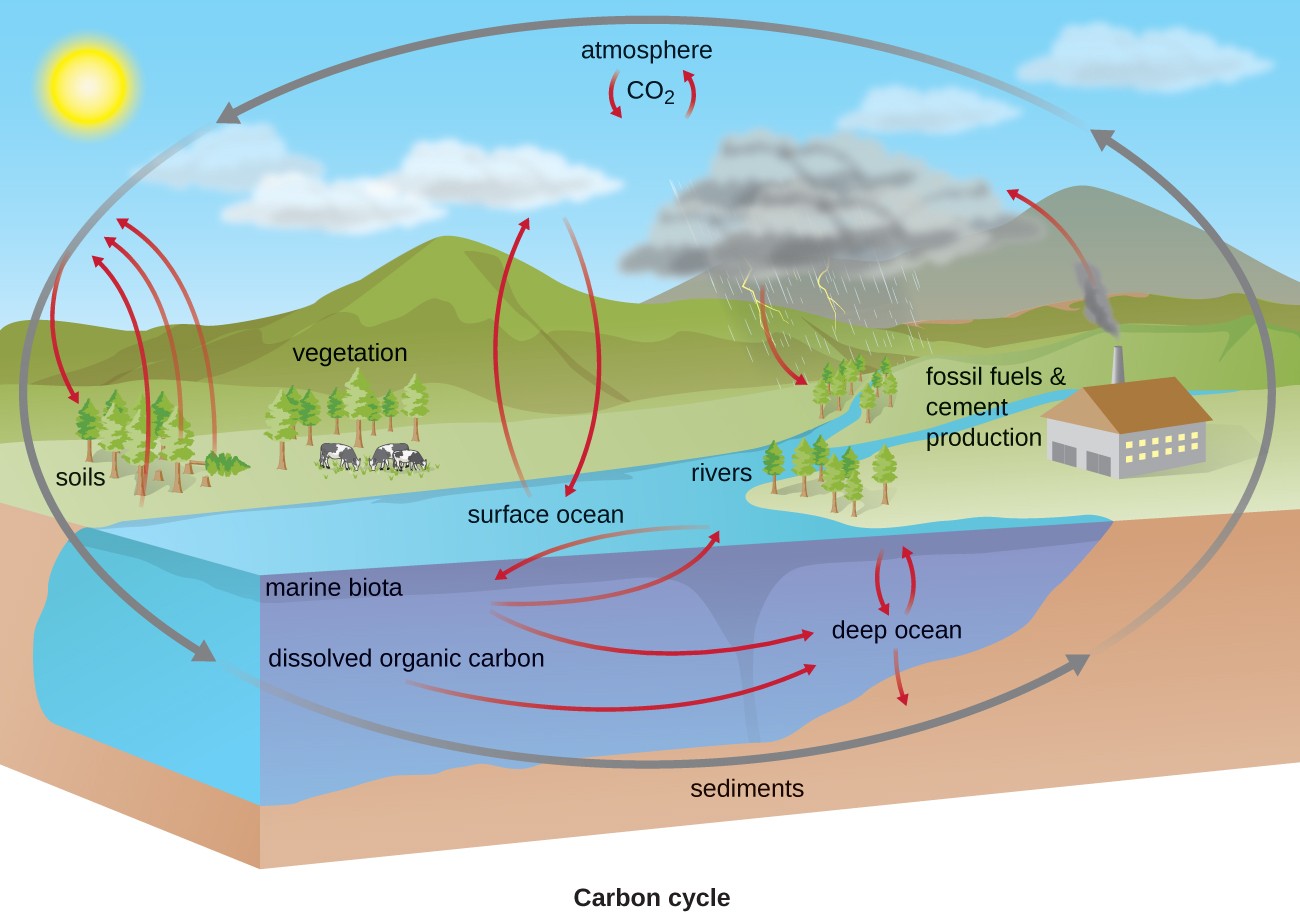 Overall, there is a constant exchange of CO2 between the heterotrophs (which produce CO2 as a result of respiration or fermentation) and the autotrophs (which use the CO2 for fixation). Autotrophs also respire or ferment, consuming the organic molecules they form; they do not fix carbon for heterotrophs, but rather use it for their own metabolic needs.

Many biological macromolecules, including proteins and nucleic acids, contain nitrogen; however, getting nitrogen into living organisms is difficult. Prokaryotes play essential roles in the nitrogen cycle (Figure 2), transforming nitrogen between various forms for their own needs, benefiting other organisms indirectly. Plants and phytoplankton cannot incorporate nitrogen from the atmosphere (where it exists as tightly bonded, triple covalent N2), even though this molecule composes approximately 78% of the atmosphere. Nitrogen enters the living world through free-living and symbiotic bacteria, which incorporate nitrogen into their macromolecules through specialized biochemical pathways called nitrogen fixation. Cyanobacteria in aquatic ecosystems fix inorganic nitrogen (from nitrogen gas) into ammonia (NH3) that can be easily incorporated into biological macromolecules. Rhizobium bacteria (Figure 1 in Introduction to Microbial Metabolism) also fix nitrogen and live symbiotically in the root nodules of legumes (such as beans, peanuts, and peas), providing them with needed organic nitrogen while receiving fixed carbon as sugar in exchange. Free-living bacteria, such as members of the genus Azotobacter, are also able to fix nitrogen.

The nitrogen that enters living systems by nitrogen fixation is eventually converted from organic nitrogen back into nitrogen gas by microbes through three steps: ammonification, nitrification, and denitrification. In terrestrial systems, the first step is the ammonification process, in which certain bacteria and fungi convert nitrogenous waste from living animals or from the remains of dead organisms into ammonia (NH3). This ammonia is then oxidized to nitrite [latex]\left({\text{NO}}_{2}^{-}\right)[/latex], then to nitrate [latex]\left({\text{NO}}_{3}^{-}\right)[/latex], by nitrifying soil bacteria such as members of the genus Nitrosomonas, through the process of nitrification. Last, the process of denitrification occurs, whereby soil bacteria, such as members of the genera Pseudomonas and Clostridium, use nitrate as a terminal electron acceptor in anaerobic respiration, converting it into nitrogen gas that reenters the atmosphere. A similar process occurs in the marine nitrogen cycle, where these three processes are performed by marine bacteria and archaea.

Human activity releases nitrogen into the environment by the use of artificial fertilizers that contain nitrogen and phosphorus compounds, which are then washed into lakes, rivers, and streams by surface runoff. A major effect from fertilizer runoff is saltwater and freshwater eutrophication, in which nutrient runoff causes the overgrowth and subsequent death of aquatic algae, making water sources anaerobic and inhospitable for the survival of aquatic organisms. 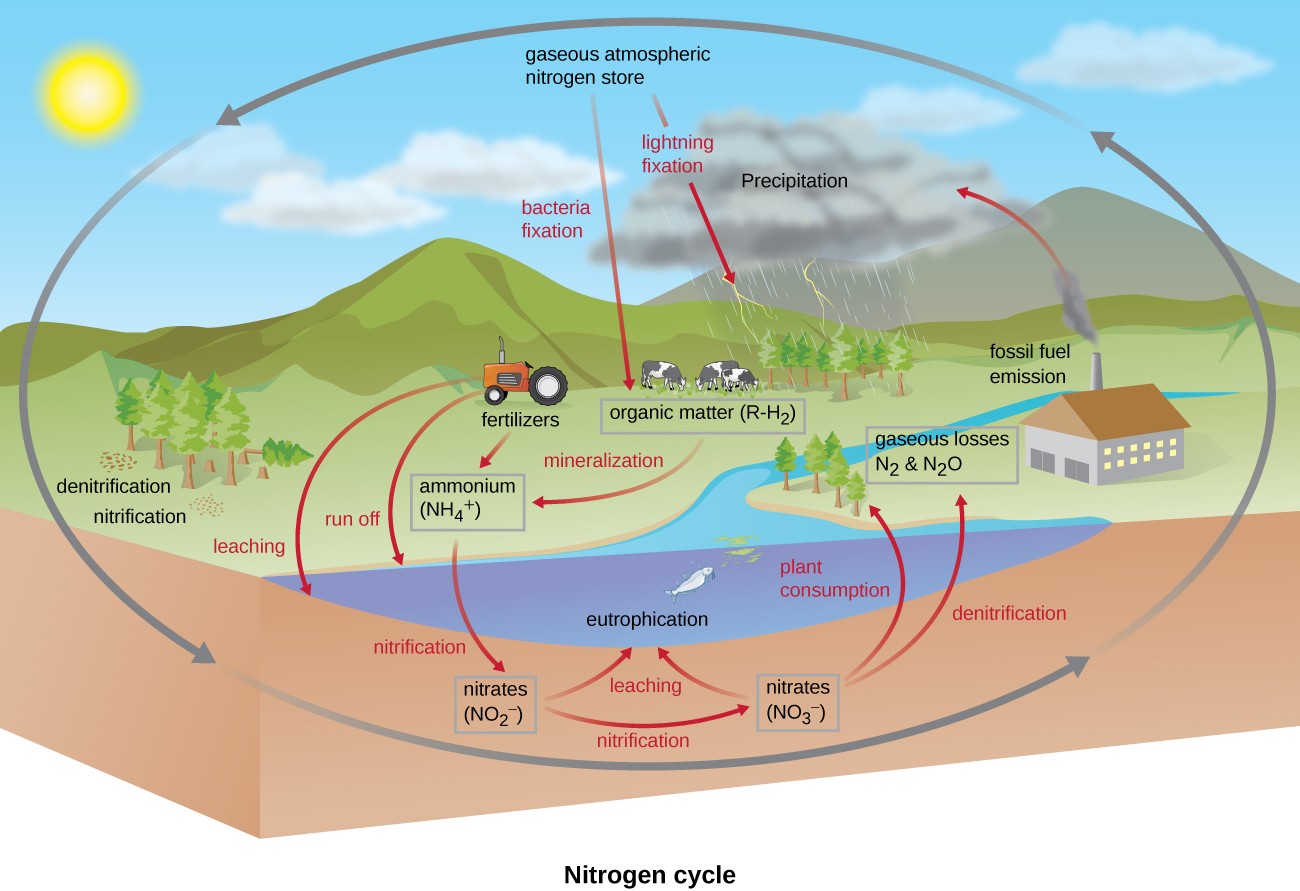 Figure 2. Click for a larger image. This figure summarizes the nitrogen cycle. Note that specific groups of prokaryotes each participate in every step in the cycle. (credit: modification of work by NOAA)

To learn more about the nitrogen cycle, visit the PBS website.

Sulfur is an essential element for the macromolecules of living organisms. As part of the amino acids cysteine and methionine, it is involved in the formation of proteins. It is also found in several vitamins necessary for the synthesis of important biological molecules like coenzyme A. Several groups of microbes are responsible for carrying out processes involved in the sulfur cycle (Figure 3). Anoxygenic photosynthetic bacteria as well as chemoautotrophic archaea and bacteria use hydrogen sulfide as an electron donor, oxidizing it first to elemental sulfur (S0), then to sulfate [latex]\left({\text{SO}}_{4}^{2-}\right)[/latex]. This leads to stratification of hydrogen sulfide in soil, with levels increasing at deeper, more anaerobic depths. 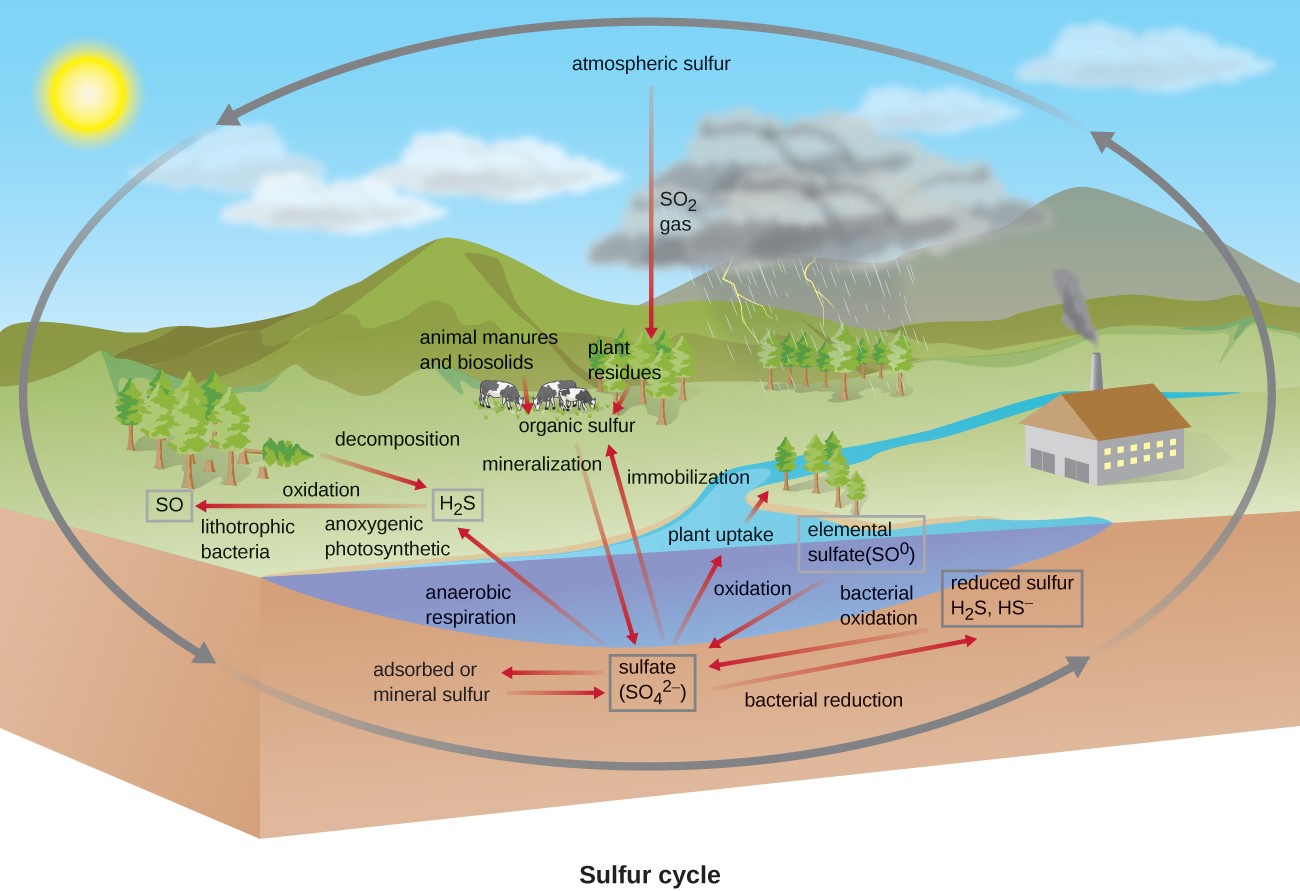 Figure 3. Click for a larger image. This figure summarizes the sulfur cycle. Note that specific groups of prokaryotes each may participate in every step in the cycle. (credit: modification of work by NOAA)

Many bacteria and plants can use sulfate as a sulfur source. Decomposition dead organisms by fungi and bacteria remove sulfur groups from amino acids, producing hydrogen sulfide, returning inorganic sulfur to the environment.

Beyond their involvement in the carbon, nitrogen, and sulfur cycles, prokaryotes are involved in other biogeochemical cycles as well. Like the carbon, nitrogen, and sulfur cycles, several of these additional biogeochemical cycles, such as the iron (Fe), manganese (Mn), and chromium (Cr) cycles, also involve redox chemistry, with prokaryotes playing roles in both oxidation and reduction. Several other elements undergo chemical cycles that do not involve redox chemistry. Examples of these are phosphorus (P), calcium (Ca), and silica (Si) cycles. The cycling of these elements is particularly important in oceans because large quantities of these elements are incorporated into the exoskeletons of marine organisms. These biogeochemical cycles do not involve redox chemistry but instead involve fluctuations in the solubility of compounds containing calcium, phosphorous, and silica. The overgrowth of naturally occurring microbial communities is typically limited by the availability of nitrogen (as previously mentioned), phosphorus, and iron. Human activities introducing excessive amounts of iron, nitrogen, or phosphorus (typically from detergents) may lead to eutrophication.

Microbial bioremediation leverages microbial metabolism to remove xenobiotics or other pollutants. Xenobiotics are compounds synthesized by humans and introduced into the environment in much higher concentrations than would naturally occur. Such environmental contamination may involve adhesives, dyes, flame retardants, lubricants, oil and petroleum products, organic solvents, pesticides, and products of the combustion of gasoline and oil. Many xenobiotics resist breakdown, and some accumulate in the food chain after being consumed or absorbed by fish and wildlife, which, in turn, may be eaten by humans. Of particular concern are contaminants like polycyclic aromatic hydrocarbon (PAH), a carcinogenic xenobiotic found in crude oil, and trichloroethylene (TCE), a common groundwater contaminant.

Some bioremediation processes rely on microorganisms that are indigenous to the contaminated site or material. Enhanced bioremediation techniques, which may be applied to either in situ or ex situ processing, involve the addition of nutrients and/or air to encourage the growth of pollution-degrading microbes; they may also involve the addition of non-native microbes known for their ability to degrade contaminants. For example, certain bacteria of the genera Rhodococcus and Pseudomonas are known for their ability to degrade many environmental contaminants, including aromatic compounds like those found in oil, down to CO2. The genes encoding their degradatory enzymes are commonly found on plasmids. Others, like Alcanivorax borkumensis, produce surfactants that are useful in the solubilization of the hydrophobic molecules found in oil, making them more accessible to other microbes for degradation.

This example concludes Alex’s story that started in Energy Matter and Enzymes, Fermentation, and Catabolism of Lipids and Proteins.

Although there is a DNA test specific for Neisseria meningitidis, it is not practical for use in some developing countries because it requires expensive equipment and a high level of expertise to perform. The hospital in Banjul was not equipped to perform DNA testing. Biochemical testing, however, is much less expensive and is still effective for microbial identification.

Fortunately for Alex, his symptoms began to resolve with antibiotic therapy. Patients who survive bacterial meningitis often suffer from long-term complications such as brain damage, hearing loss, and seizures, but after several weeks of recovery, Alex did not seem to be exhibiting any long-term effects, and his behavior returned to normal. Because of his age, his parents were advised to monitor him closely for any signs of developmental issues and have him regularly evaluated by his pediatrician.

N. meningitidis is found in the normal respiratory microbiota in 10%–20% of the human population.[1] In most cases, it does not cause disease, but for reasons not fully understood, the bacterium can sometimes invade the bloodstream and cause infections in other areas of the body, including the brain. The disease is more common in infants and children, like Alex.

The prevalence of meningitis caused by N. meningitidis is particularly high in the so-called meningitis belt, a region of sub-Saharan African that includes 26 countries stretching from Senegal to Ethiopia (Figure 4).

Figure 4. (a) Neisseria meningitidis is a gram-negative diplococcus, as shown in this gram-stained sample. (b) The “meningitis belt” is the area of sub-Saharan Africa with high prevalence of meningitis caused by N. meningitidis. (credit a, b: modification of work by Centers for Disease Control and Prevention)

The reasons for this high prevalence are not clear, but several factors may contribute to higher rates of transmission, such as the dry, dusty climate; overcrowding and low standards of living; and the relatively low immunocompetence and nutritional status of the population.[2] A vaccine against four bacterial strains of N. meningitidis is available. Vaccination is recommended for 11- and 12-year-old children, with a booster at age 16 years. Vaccination is also recommended for young people who live in close quarters with others (e.g., college dormitories, military barracks), where the disease is more easily transmitted. Travelers visiting the “meningitis belt” should also be vaccinated, especially during the dry season (December through June) when the prevalence is highest.[3] [4]

Which of the following is the group of archaea that can use CO2 as their final electron acceptor during anaerobic respiration, producing CH4?

Which of the following processes is not involved in the conversion of organic nitrogen to nitrogen gas?

Show Answer
Answer a. Nitrogen fixation is not involved in the conversion of organic nitrogen to nitrogen gas.

Which of the following processes produces hydrogen sulfide?

The biogeochemical cycle of which of the following elements is based on changes in solubility rather than redox chemistry?

Show Answer
Answer d. The phosphorus cycle is based on changes in solubility rather than redox chemistry.

The molecule central to the carbon cycle that is exchanged within and between ecosystems, being produced by heterotrophs and used by autotrophs, is ________.

Show Answer
The molecule central to the carbon cycle that is exchanged within and between ecosystems, being produced by heterotrophs and used by autotrophs, is carbon dioxide.

The use of microbes to remove pollutants from a contaminated system is called ________.

Show Answer
The use of microbes to remove pollutants from a contaminated system is called bioremediation.

There are many naturally occurring microbes that have the ability to degrade several of the compounds found in oil.