The most abundant biomolecules on earth are carbohydrates. From a chemical viewpoint, carbohydrates are primarily a combination of carbon and water, and many of them have the empirical formula (CH2O)n, where n is the number of repeated units. This view represents these molecules simply as “hydrated” carbon atom chains in which water molecules attach to each carbon atom, leading to the term “carbohydrates.” Although all carbohydrates contain carbon, hydrogen, and oxygen, there are some that also contain nitrogen, phosphorus, and/or sulfur. Carbohydrates have myriad different functions. They are abundant in terrestrial ecosystems, many forms of which we use as food sources. These molecules are also vital parts of macromolecular structures that store and transmit genetic information (i.e., DNA and RNA). They are the basis of biological polymers that impart strength to various structural components of organisms (e.g., cellulose and chitin), and they are the primary source of energy storage in the form of starch and glycogen.

Monosaccharides: The Sweet Ones

In biochemistry, carbohydrates are often called saccharides, from the Greek sakcharon, meaning sugar, although not all the saccharides are sweet. The simplest carbohydrates are called monosaccharides, or simple sugars. They are the building blocks (monomers) for the synthesis of polymers or complex carbohydrates, as will be discussed further in this section. Monosaccharides are classified based on the number of carbons in the molecule. General categories are identified using a prefix that indicates the number of carbons and the suffix –ose, which indicates a saccharide; for example, triose (three carbons), tetrose (four carbons), pentose (five carbons), and hexose (six carbons) (Figure 1). The hexose D-glucose is the most abundant monosaccharide in nature. Other very common and abundant hexose monosaccharides are galactose, used to make the disaccharide milk sugar lactose, and the fruit sugar fructose. 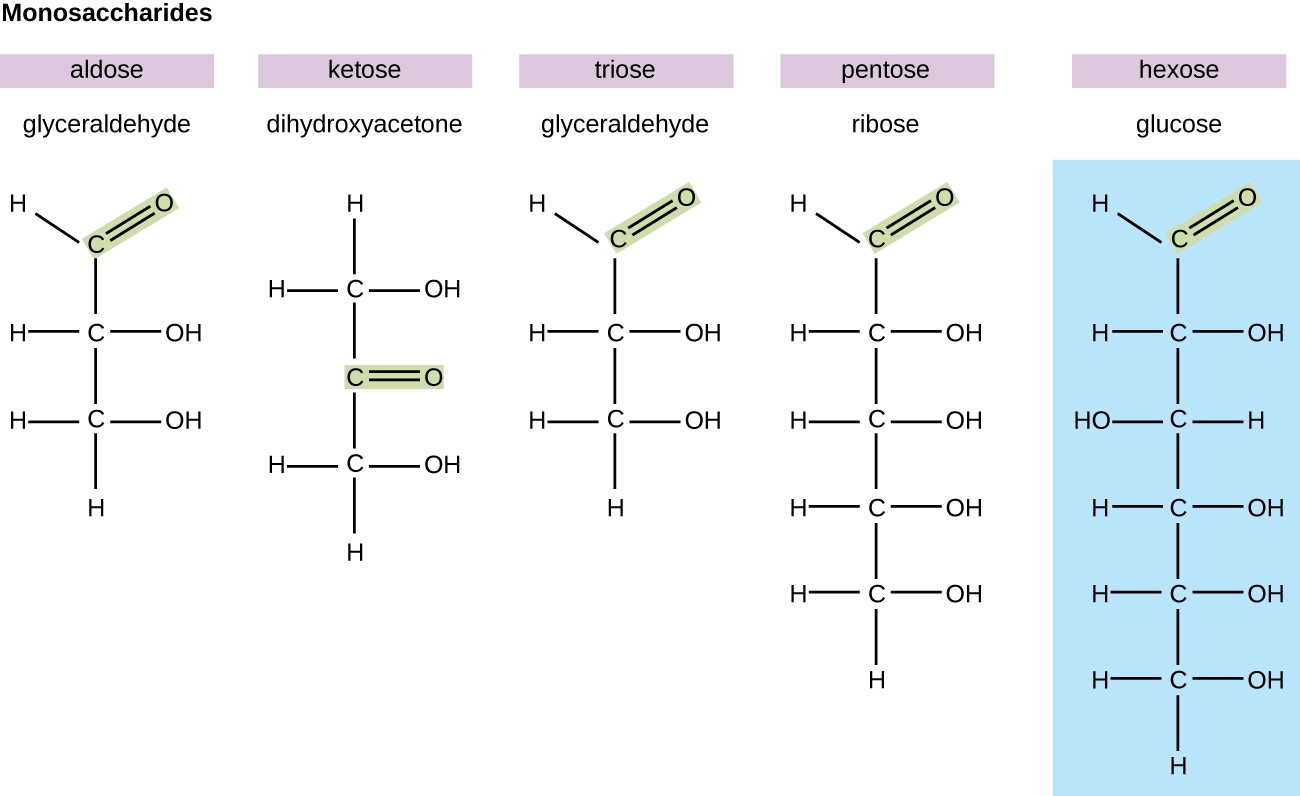 Figure 1. Monosaccharides are classified based on the position of the carbonyl group and the number of carbons in the backbone.

Monosaccharides of four or more carbon atoms are typically more stable when they adopt cyclic, or ring, structures. These ring structures result from a chemical reaction between functional groups on opposite ends of the sugar’s flexible carbon chain, namely the carbonyl group and a relatively distant hydroxyl group. Glucose, for example, forms a six-membered ring (Figure 2). 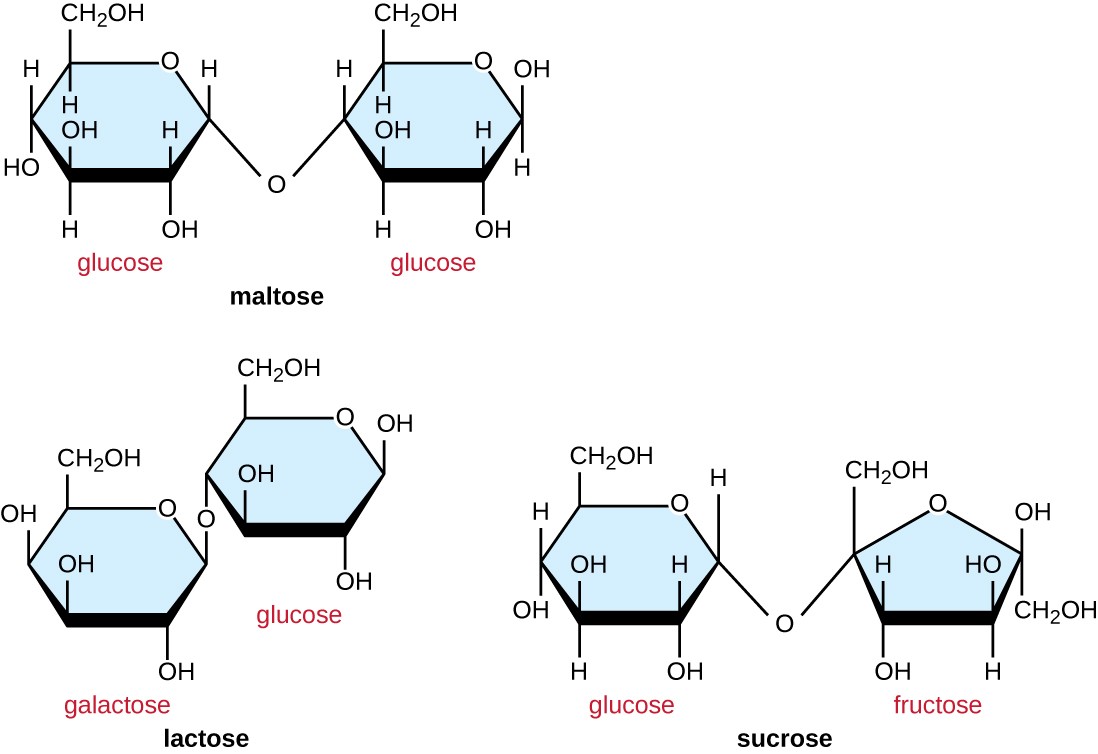 Polysaccharides are very diverse in their structure. Three of the most biologically important polysaccharides—starch, glycogen, and cellulose—are all composed of repetitive glucose units, although they differ in their structure (Figure 4). Cellulose consists of a linear chain of glucose molecules and is a common structural component of cell walls in plants and other organisms. Glycogen and starch are branched polymers; glycogen is the primary energy-storage molecule in animals and bacteria, whereas plants primarily store energy in starch. The orientation of the glycosidic linkages in these three polymers is different as well and, as a consequence, linear and branched macromolecules have different properties.

Modified glucose molecules can be fundamental components of other structural polysaccharides. Examples of these types of structural polysaccharides are N-acetyl glucosamine (NAG) and N-acetyl muramic acid (NAM) found in bacterial cell wall peptidoglycan. Polymers of NAG form chitin, which is found in fungal cell walls and in the exoskeleton of insects. 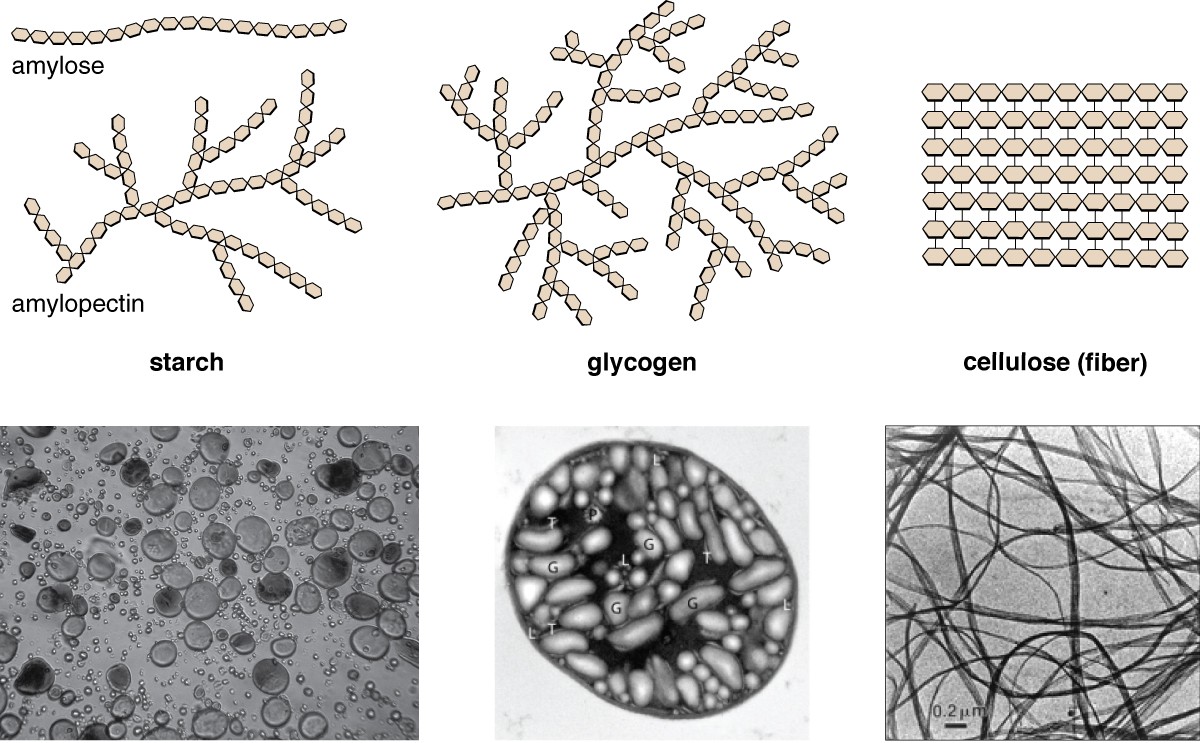 By definition, carbohydrates contain which elements?

Monosaccharides may link together to form polysaccharides by forming which type of bond?

Match each polysaccharide with its description.

Chitin is a structural polymer found in cell walls of fungi and exoskeletons of some animals. (C)

Glycogen is an energy storage polymer found in animal cells and bacteria. (D)

Starch is a energy storage polymer in plants. (A)

Cellulose is a structural polymer found in plants. (B)