Extensive enzyme pathways exist for breaking down carbohydrates to capture energy in ATP bonds. In addition, many catabolic pathways produce intermediate molecules that are also used as building blocks for anabolism. Understanding these processes is important for several reasons. First, because the main metabolic processes involved are common to a wide range of chemoheterotrophic organisms, we can learn a great deal about human metabolism by studying metabolism in more easily manipulated bacteria like E. coli. Second, because animal and human pathogens are also chemoheterotrophs, learning about the details of metabolism in these bacteria, including possible differences between bacterial and human pathways, is useful for the diagnosis of pathogens as well as for the discovery of antimicrobial therapies targeting specific pathogens. Last, learning specifically about the pathways involved in chemoheterotrophic metabolism also serves as a basis for comparing other more unusual metabolic strategies used by microbes. Although the chemical source of electrons initiating electron transfer is different between chemoheterorophs and chemoautotrophs, many similar processes are used in both types of organisms.

The typical example used to introduce concepts of metabolism to students is carbohydrate catabolism. For chemoheterotrophs, our examples of metabolism start with the catabolism of polysaccharides such as glycogen, starch, or cellulose. Enzymes such as amylase, which breaks down glycogen or starch, and cellulases, which break down cellulose, can cause the hydrolysis of glycosidic bonds between the glucose monomers in these polymers, releasing glucose for further catabolism.

For bacteria, eukaryotes, and most archaea, glycolysis is the most common pathway for the catabolism of glucose; it produces energy, reduced electron carriers, and precursor molecules for cellular metabolism. Every living organism carries out some form of glycolysis, suggesting this mechanism is an ancient universal metabolic process. The process itself does not use oxygen; however, glycolysis can be coupled with additional metabolic processes that are either aerobic or anaerobic. Glycolysis takes place in the cytoplasm of prokaryotic and eukaryotic cells. It begins with a single six-carbon glucose molecule and ends with two molecules of a three-carbon sugar called pyruvate. Pyruvate may be broken down further after glycolysis to harness more energy through aerobic or anaerobic respiration, but many organisms, including many microbes, may be unable to respire; for these organisms, glycolysis may be their only source of generating ATP. 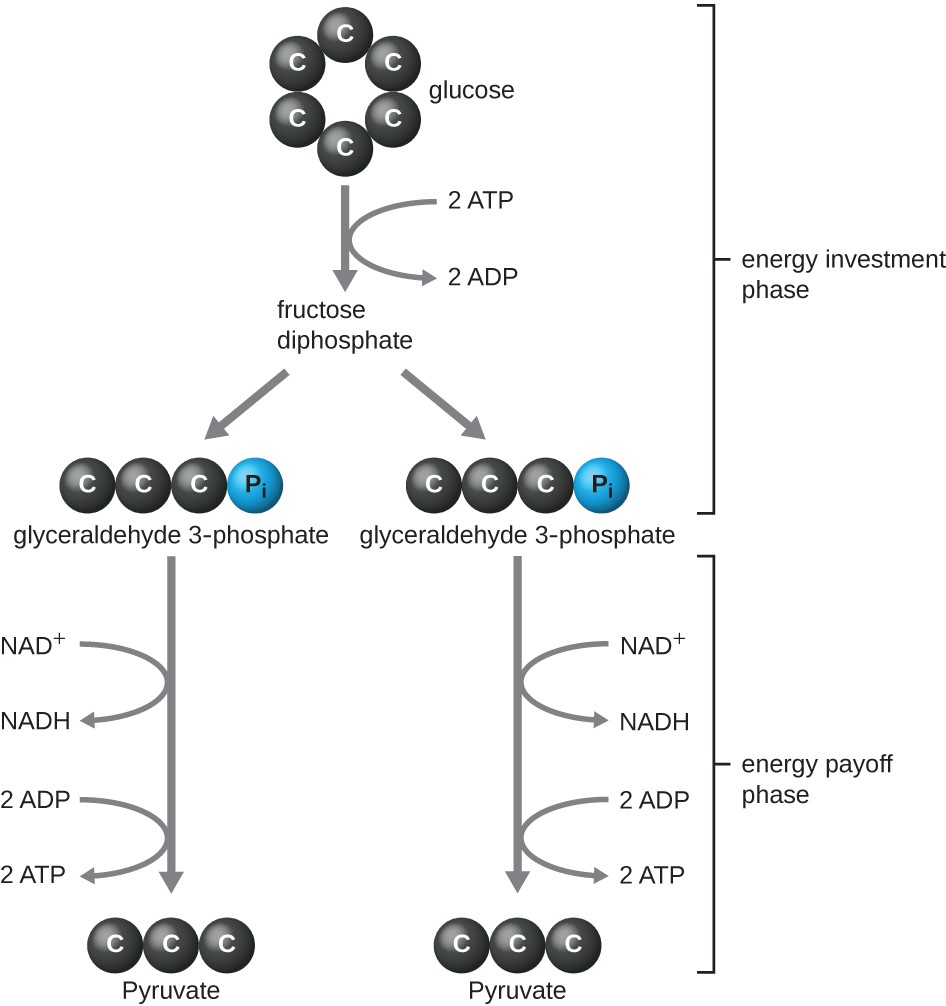 The type of glycolysis found in animals and that is most common in microbes is the Embden-Meyerhof-Parnas (EMP) pathway, named after Gustav Embden (1874–1933), Otto Meyerhof (1884–1951), and Jakub Parnas (1884–1949). Glycolysis using the EMP pathway consists of two distinct phases (Figure 1). The first part of the pathway, called the energy investment phase, uses energy from two ATP molecules to modify a glucose molecule so that the six-carbon sugar molecule can be split evenly into two phosphorylated three-carbon molecules called glyceraldehyde 3-phosphate (G3P). The second part of the pathway, called the energy payoff phase, extracts energy by oxidizing G3P to pyruvate, producing four ATP molecules and reducing two molecules of NAD+ to two molecules of NADH, using electrons that originated from glucose. (A discussion and illustration of the full EMP pathway with chemical structures and enzyme names appear in Metabolic Pathways.)

The ATP molecules produced during the energy payoff phase of glycolysis are formed by substrate-level phosphorylation (Figure 2), one of two mechanisms for producing ATP. In substrate-level phosphorylation, a phosphate group is removed from an organic molecule and is directly transferred to an available ADP molecule, producing ATP. During glycolysis, high-energy phosphate groups from the intermediate molecules are added to ADP to make ATP.

Figure 2. The ATP made during glycolysis is a result of substrate-level phosphorylation. One of the two enzymatic reactions in the energy payoff phase of Embden Meyerhof-Parnas glycolysis that produce ATP in this way is shown here.

Overall, in this process of glycolysis, the net gain from the breakdown of a single glucose molecule is:

When we refer to glycolysis, unless otherwise indicated, we are referring to the EMP pathway used by animals and many bacteria. However, some prokaryotes use alternative glycolytic pathways. One important alternative is the Entner-Doudoroff (ED) pathway, named after its discoverers Nathan Entner and Michael Doudoroff (1911–1975). Although some bacteria, including the opportunistic gram-negative pathogen Pseudomonas aeruginosa, contain only the ED pathway for glycolysis, other bacteria, like E. coli, have the ability to use either the ED pathway or the EMP pathway.

A third type of glycolytic pathway that occurs in all cells, which is quite different from the previous two pathways, is the pentose phosphate pathway (PPP) also called the phosphogluconate pathway or the hexose monophosphate shunt. Evidence suggests that the PPP may be the most ancient universal glycolytic pathway. The intermediates from the PPP are used for the biosynthesis of nucleotides and amino acids. Therefore, this glycolytic pathway may be favored when the cell has need for nucleic acid and/or protein synthesis, respectively. A discussion and illustration of the complete ED pathway and PPP with chemical structures and enzyme names appear in Metabolic Pathways.

Transition Reaction, Coenzyme A, and the Krebs Cycle

Glycolysis produces pyruvate, which can be further oxidized to capture more energy. For pyruvate to enter the next oxidative pathway, it must first be decarboxylated by the enzyme complex pyruvate dehydrogenase to a two-carbon acetyl group in the transition reaction, also called the bridge reaction (see Metabolic Pathways and Figure 3). In the transition reaction, electrons are also transferred to NAD+ to form NADH. To proceed to the next phase of this metabolic process, the comparatively tiny two-carbon acetyl must be attached to a very large carrier compound called coenzyme A (CoA). The transition reaction occurs in the mitochondrial matrix of eukaryotes; in prokaryotes, it occurs in the cytoplasm because prokaryotes lack membrane-enclosed organelles. 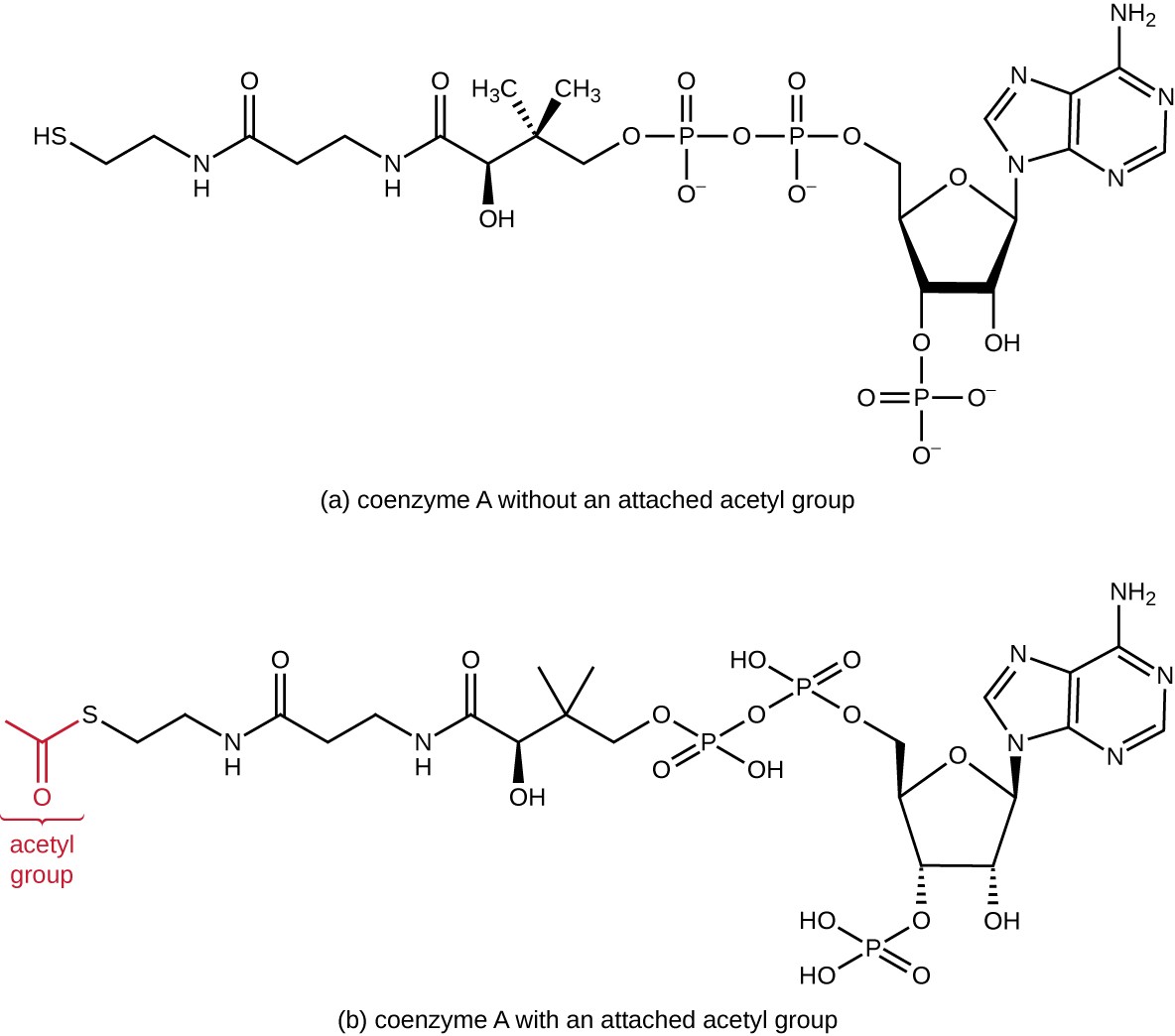 The Krebs cycle transfers remaining electrons from the acetyl group produced during the transition reaction to electron carrier molecules, thus reducing them. The Krebs cycle also occurs in the cytoplasm of prokaryotes along with glycolysis and the transition reaction, but it takes place in the mitochondrial matrix of eukaryotic cells where the transition reaction also occurs. The Krebs cycle is named after its discoverer, British scientist Hans Adolf Krebs (1900–1981) and is also called the citric acid cycle, or the tricarboxylic acid cycle (TCA) because citric acid has three carboxyl groups in its structure. Unlike glycolysis, the Krebs cycle is a closed loop: The last part of the pathway regenerates the compound used in the first step (Figure 4). The eight steps of the cycle are a series of chemical reactions that capture the two-carbon acetyl group (the CoA carrier does not enter the Krebs cycle) from the transition reaction, which is added to a four-carbon intermediate in the Krebs cycle, producing the six-carbon intermediate citric acid (giving the alternate name for this cycle). As one turn of the cycle returns to the starting point of the four-carbon intermediate, the cycle produces two CO2 molecules, one ATP molecule (or an equivalent, such as guanosine triphosphate [GTP]) produced by substrate-level phosphorylation, and three molecules of NADH and one of FADH2. (A discussion and detailed illustration of the full Krebs cycle appear in Metabolic Pathways.) 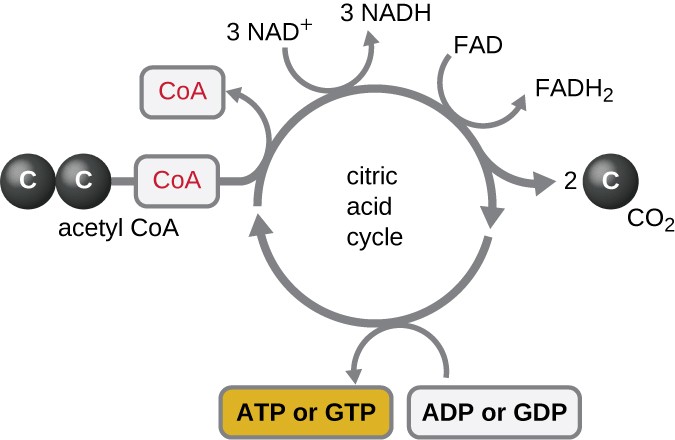 Figure 4. The Krebs cycle, also known as the citric acid cycle, is summarized here. Note incoming two-carbon acetyl results in the main outputs per turn of two CO2, three NADH, one FADH2, and one ATP (or GTP) molecules made by substrate-level phosphorylation. Two turns of the Krebs cycle are required to process all of the carbon from one glucose molecule.

Although many organisms use the Krebs cycle as described as part of glucose metabolism, several of the intermediate compounds in the Krebs cycle can be used in synthesizing a wide variety of important cellular molecules, including amino acids, chlorophylls, fatty acids, and nucleotides; therefore, the cycle is both anabolic and catabolic (Figure 5). 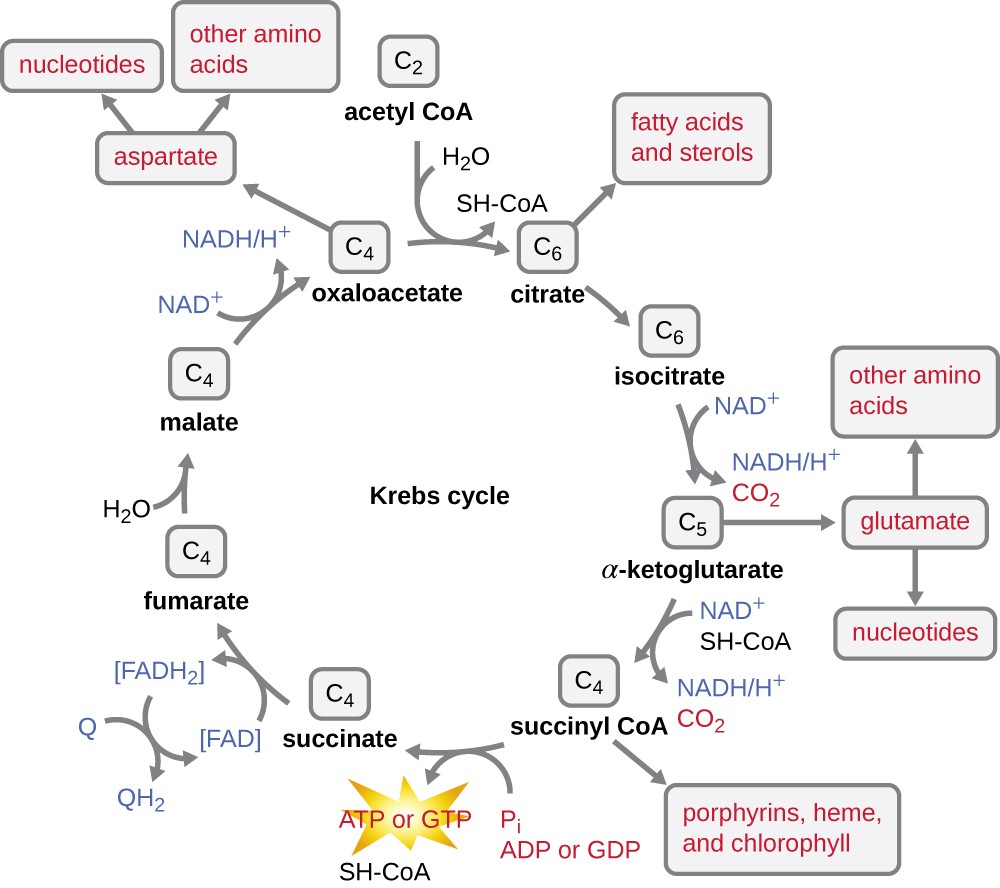 Figure 5. Many organisms use intermediates from the Krebs cycle, such as amino acids, fatty acids, and nucleotides, as building blocks for biosynthesis.

During which of the following is ATP not made by substrate-level phosphorylation?

Show Answer
Answer b. ATP is not made by substrate-level phosphorylation during the Transition reaction.

Which of the following products is made during Embden-Meyerhof glycolysis?

Show Answer
Answer b. Pyruvate is made during Embden-Meyerhof glycolysis.

During the catabolism of glucose, which of the following is produced only in the Krebs cycle?

Show Answer
Answer d. FADH2 is produced only in the Krebs cycle?

Which of the following is not a name for the cycle resulting in the conversion of a two-carbon acetyl to one ATP, two CO2, one FADH2, and three NADH molecules?

Show Answer
Answer c. The Calvin cycle is results  in the conversion of a two-carbon acetyl to one ATP, two CO2, one FADH2, and three NADH molecules.

Show Answer
Per turn of the Krebs cycle, one acetyl is oxidized, forming two CO2, one ATP, three NADH, and one FADH2 molecules.

Most commonly, glycolysis occurs by the ________ pathway.

Show Answer
Most commonly, glycolysis occurs by the Embden-Meyerhof  pathway.