Diseases of the Immune System

The causes of chronic granulomatous disease (CGD) are defects in the NADPH oxidase system of phagocytic cells, including neutrophils and macrophages, that prevent the production of superoxide radicals in phagolysosomes. The inability to produce superoxide radicals impairs the antibacterial activity of phagocytes. As a result, infections in patients with CGD persist longer, leading to a chronic local inflammation called a granuloma. Microorganisms that are the most common causes of infections in patients with CGD include Aspergillus spp., Staphylococcus aureus, Chromobacterium violaceum, Serratia marcescens, and Salmonella typhimurium.

Deficiencies in B cells due to defective differentiation lead to a lack of specific antibody production known as X-linked agammaglobulinemia. In 1952, Ogden C. Bruton (1908–2003) described the first immunodeficiency in a boy whose immune system failed to produce antibodies. This defect is inherited on the X chromosome and is characterized by the absence of immunoglobulin in the serum; it is called Bruton X-linked agammaglobulinemia (XLA). The defective gene, BTK, in XLA is now known to encode a tyrosine kinase called Bruton tyrosine kinase (Btk). In patients whose B cells are unable to produce sufficient amounts of Btk, the B-cell maturation and differentiation halts at the pre-B-cell stage of growth. B-cell maturation and differentiation beyond the pre-B-cell stage of growth is required for immunoglobulin production. Patients who lack antibody production suffer from recurrent infections almost exclusively due to extracellular pathogens that cause pyogenic infections: Haemophilus influenzae, Streptococcus pneumoniae, S. pyogenes, and S. aureus. Because cell-mediated immunity is not impaired, these patients are not particularly vulnerable to infections caused by viruses or intracellular pathogens.

The most common inherited form of immunoglobulin deficiency is selective IgA deficiency, affecting about one in 800 people. Individuals with selective IgA deficiency produce normal levels of IgG and IgM, but are not able to produce secretory IgA. IgA deficiency predisposes these individuals to lung and gastrointestinal infections for which secretory IgA is normally an important defense mechanism. Infections in the lungs and gastrointestinal tract can involve a variety of pathogens, including H. influenzae, S. pneumoniae, Moraxella catarrhalis, S. aureus, Giardia lamblia, or pathogenic strains of Escherichia coli.

Patients who suffer from severe combined immunodeficiency (SCID) have B-cell and T-cell defects that impair T-cell dependent antibody responses as well as cell-mediated immune responses. Patients with SCID also cannot develop immunological memory, so vaccines provide them no protection, and live attenuated vaccines (e.g., for varicella-zoster, measles virus, rotavirus, poliovirus) can actually cause the infection they are intended to prevent. The most common form is X-linked SCID, which accounts for nearly 50% of all cases and occurs primarily in males. Patients with SCID are typically diagnosed within the first few months of life after developing severe, often life-threatening, opportunistic infection by Candida spp., Pneumocystis jirovecii, or pathogenic strains of E. coli.

Without treatment, babies with SCID do not typically survive infancy. In some cases, a bone marrow transplant may successfully correct the defects in lymphocyte development that lead to the SCID phenotype, by replacing the defective component. However, this treatment approach is not without risks, as demonstrated by the famous case of David Vetter (1971–1984), better known as “Bubble Boy.” Vetter, a patient with SCID who lived in a protective plastic bubble to prevent exposure to opportunistic microbes, received a bone marrow transplant from his sister. Because of a latent Epstein-Barr virus infection in her bone marrow, however, he developed mononucleosis and died of Burkitt lymphoma at the age of 12 years. 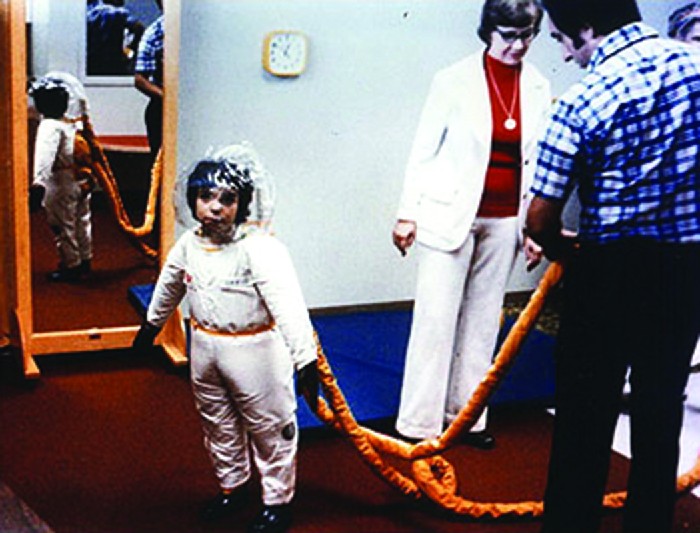 Figure 1. David Vetter, popularly known as “The Bubble Boy,” was born with SCID and lived most of his life isolated inside a plastic bubble. Here he is shown outside the bubble in a suit specially built for him by NASA. (credit: NASA Johnson Space Center)

HIV infection and the associated acquired immunodeficiency syndrome (AIDS) are the best-known secondary immunodeficiencies. AIDS is characterized by profound CD4 T-cell lymphopenia (decrease in lymphocytes). The decrease in CD4 T cells is the result of various mechanisms, including HIV-induced pyroptosis (a type of apoptosis that stimulates an inflammatory response), viral cytopathic effect, and cytotoxicity to HIV-infected cells.

Benjamin, a 50-year-old male patient who has been receiving chemotherapy to treat his chronic myelogenous leukemia (CML), a disease characterized by massive overproduction of nonfunctional, malignant myelocytic leukocytes that crowd out other, healthy leukocytes, is seen in the emergency department. He is complaining of a productive, wet cough, dyspnea, and fatigue. On examination, his pulse is 120 beats per minute (bpm) (normal range is 60–100 bpm) and weak, and his blood pressure is 90/60 mm Hg (normal is 120/80 mm Hg). During auscultation, a distinct crackling can be heard in his lungs as he breathes, and his pulse-oximeter level (a measurement of blood-oxygen saturation) is 80% (normal is 95%–100%). He has a fever; his temperature is 38.9 °C (102 °F). Sputum cultures and blood samples are obtained and sent to the lab, but Benjamin goes into respiratory distress and dies before the results can be obtained.

Benjamin’s death was a result of a combination of his immune system being compromised by his leukemia and his chemotherapy treatment further weakening his ability to mount an immune response. CML (and leukemia in general) and corresponding chemotherapy cause a decrease in the number of leukocytes capable of normal function, leading to secondary immunodeficiency. This increases the risk for opportunistic bacterial, viral, protozoal, and fungal infections that could include Staphylococcus, enteroviruses, Pneumocystis, Giardia, or Candida. Benjamin’s symptoms were suggestive of bacterial pneumonia, but his leukemia and chemotherapy likely complicated and contributed to the severity of the pneumonia, resulting in his death. Because his leukemia was overproducing certain white blood cells, and those overproduced white blood cells were largely nonfunctional or abnormal in their function, he did not have the proper immune system blood cells to help him fight off the infection.

The table below summarizes primary and secondary immunodeficiencies, their effects on immune function, and typical outcomes.

Which of the following is a genetic disease that results in lack of production of antibodies?

Show Answer
a. Agammaglobulinemia is a genetic disease that results in lack of production of antibodies.

Which of the following is a genetic disease that results in almost no adaptive immunity due to lack of B and/ or T cells?

Show Answer
b. Severe combined immunodeficiency results in almost no adaptive immunity due to lack of B and/ or T cells.

All but which one of the following are examples of secondary immunodeficiencies?

Diseases due to ________ abnormalities are termed primary immunodeficiencies.

A secondary immunodeficiency is ________, rather than genetic.

Show Answer
A secondary immunodeficiency is acquired, rather than genetic.