The study of microorganisms is greatly facilitated if we are able to culture them, that is, to keep reproducing populations alive under laboratory conditions. Culturing many microorganisms is challenging because of highly specific nutritional and environmental requirements and the diversity of these requirements among different species.

The number of available media to grow bacteria is considerable. Some media are considered general all-purpose media and support growth of a large variety of organisms. A prime example of an all-purpose medium is tryptic soy broth (TSB). Specialized media are used in the identification of bacteria and are supplemented with dyes, pH indicators, or antibiotics. One type, enriched media, contains growth factors, vitamins, and other essential nutrients to promote the growth of fastidious organisms, organisms that cannot make certain nutrients and require them to be added to the medium. When the complete chemical composition of a medium is known, it is called a chemically defined medium. For example, in EZ medium, all individual chemical components are identified and the exact amounts of each is known. In complex media, which contain extracts and digests of yeasts, meat, or plants, the precise chemical composition of the medium is not known. Amounts of individual components are undetermined and variable. Nutrient broth, tryptic soy broth, and brain heart infusion, are all examples of complex media. 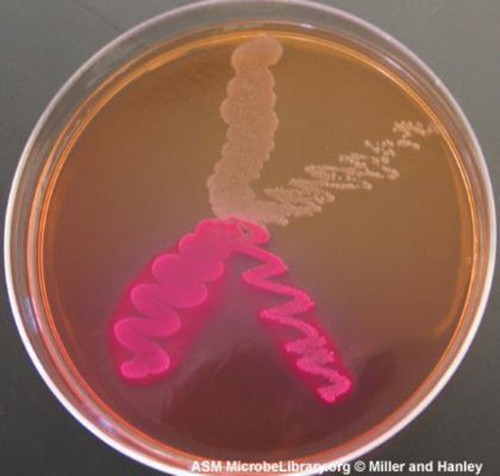 Figure 1. On this MacConkey agar plate, the lactose-fermenter E. coli colonies are bright pink. Serratia marcescens, which does not ferment lactose, forms a cream-colored streak on the tan medium. (credit: American Society for Microbiology)

Media that inhibit the growth of unwanted microorganisms and support the growth of the organism of interest by supplying nutrients and reducing competition are called selective media. An example of a selective medium is MacConkey agar. It contains bile salts and crystal violet, which interfere with the growth of many gram-positive bacteria and favor the growth of gram-negative bacteria, particularly the Enterobacteriaceae. These species are commonly named enterics, reside in the intestine, and are adapted to the presence of bile salts. The enrichment cultures foster the preferential growth of a desired microorganism that represents a fraction of the organisms present in an inoculum. For example, if we want to isolate bacteria that break down crude oil, hydrocarbonoclastic bacteria, sequential subculturing in a medium that supplies carbon only in the form of crude oil will enrich the cultures with oil-eating bacteria. The differential media make it easy to distinguish colonies of different bacteria by a change in the color of the colonies or the color of the medium. Color changes are the result of end products created by interaction of bacterial enzymes with differential substrates in the medium or, in the case of hemolytic reactions, the lysis of red blood cells in the medium. In Figure 1, the differential fermentation of lactose can be observed on MacConkey agar. The lactose fermenters produce acid, which turns the medium and the colonies of strong fermenters hot pink. The medium is supplemented with the pH indicator neutral red, which turns to hot pink at low pH. Selective and differential media can be combined and play an important role in the identification of bacteria by biochemical methods.

Compare the compositions of EZ medium and sheep blood agar.

The microbiology department is celebrating the end of the school year in May by holding its traditional picnic on the green. The speeches drag on for a couple of hours, but finally all the faculty and students can dig into the food: chicken salad, tomatoes, onions, salad, and custard pie. By evening, the whole department, except for two vegetarian students who did not eat the chicken salad, is stricken with nausea, vomiting, retching, and abdominal cramping. Several individuals complain of diarrhea. One patient shows signs of shock (low blood pressure). Blood and stool samples are collected from patients, and an analysis of all foods served at the meal is conducted.

Blood samples from the patients showed no signs of bacterial infection, which further suggests that this was a case of intoxication. Since intoxication is due to secreted toxins, bacteria are not usually detected in blood or stool samples. MacConkey agar and sorbitol-MacConkey agar plates and xylose-lysine-deoxycholate (XLD) plates were inoculated with stool samples and did not reveal any unusually colored colonies, and no black colonies or white colonies were observed on XLD. All lactose fermenters on MacConkey agar also ferment sorbitol. These results ruled out common agents of food-borne illnesses: E. coli, Salmonella spp., and Shigella spp. 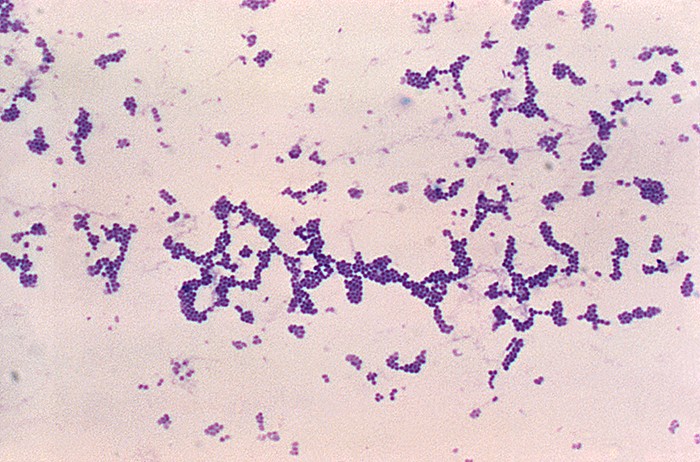 Analysis of the chicken salad revealed an abnormal number of gram-positive cocci arranged in clusters (Figure 2). A culture of the gram-positive cocci releases bubbles when mixed with hydrogen peroxide. The culture turned mannitol salt agar yellow after a 24-hour incubation.

All the tests point to Staphylococcus aureus as the organism that secreted the toxin. Samples from the salad showed the presence of gram-positive cocci bacteria in clusters. The colonies were positive for catalase. The bacteria grew on mannitol salt agar fermenting mannitol, as shown by the change to yellow of the medium. The pH indicator in mannitol salt agar is phenol red, which turns to yellow when the medium is acidified by the products of fermentation.

The toxin secreted by S. aureus is known to cause severe gastroenteritis. The organism was probably introduced into the salad during preparation by the food handler and multiplied while the salad was kept in the warm ambient temperature during the speeches.

Show Answer
Answer d. EMB agar is an example of a selective medium, a differential medium, and a complex medium.

Haemophilus influenzae must be grown on chocolate agar, which is blood agar treated with heat to release growth factors in the medium. H. influenzae is described as ________.

Blood agar contains many unspecified nutrients, supports the growth of a large number of bacteria, and allows differentiation of bacteria according to hemolysis (breakdown of blood). The medium is ________ and ________.

Show Answer
Blood agar contains many unspecified nutrients, supports the growth of a large number of bacteria, and allows differentiation of bacteria according to hemolysis (breakdown of blood). The medium is complex and differential.

Rogosa agar contains yeast extract. The pH is adjusted to 5.2 and discourages the growth of many microorganisms; however, all the colonies look similar. The medium is ________ and ________.

Show Answer
Rogosa agar contains yeast extract. The pH is adjusted to 5.2 and discourages the growth of many microorganisms; however, all the colonies look similar. The medium is complex and selective.

What is the major difference between an enrichment culture and a selective culture?

Haemophilus, influenzae grows best at 35–37 °C with ~5% CO2 (or in a candle-jar) and requires hemin (X factor) and nicotinamide-adenine-dinucleotide (NAD, also known as V factor) for growth.[1] Using the vocabulary learned in this chapter, describe H. influenzae.