Spirochetes are characterized by their long (up to 250 μm), spiral-shaped bodies. Most spirochetes are also very thin, which makes it difficult to examine gram-stained preparations under a conventional brightfield microscope. Darkfield fluorescent microscopy is typically used instead. Spirochetes are also difficult or even impossible to culture. They are highly motile, using their axial filament to propel themselves. The axial filament is similar to a flagellum, but it wraps around the cell and runs inside the cell body of a spirochete in the periplasmic space between the outer membrane and the plasma membrane (Figure 1). 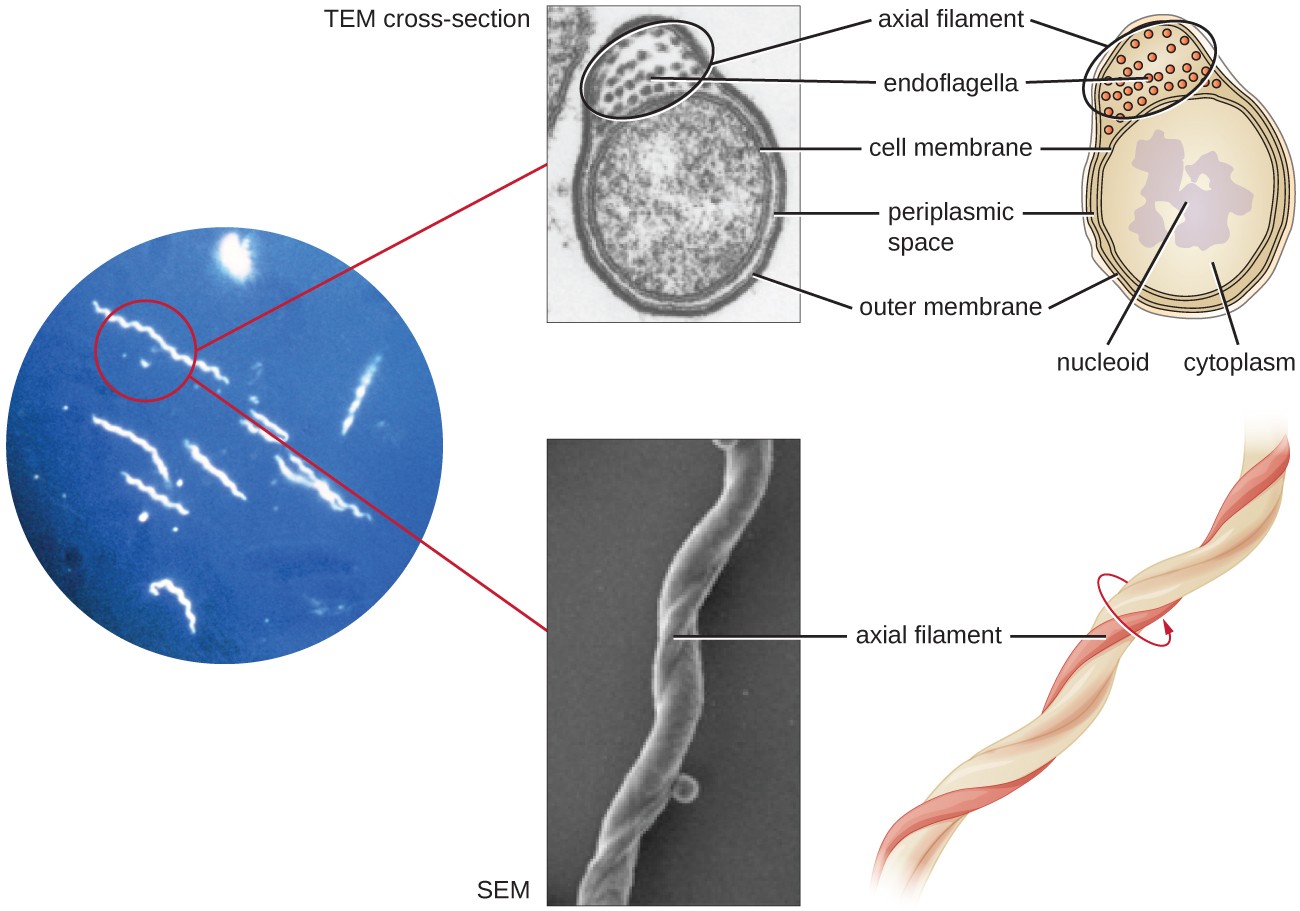 Another genus of spirochete, Borrelia, contains a number of pathogenic species. B. burgdorferi causes Lyme disease, which is transmitted by several genera of ticks (notably Ixodes and Amblyomma) and often produces a “bull’s eye” rash, fever, fatigue, and, sometimes, debilitating arthritis. B. recurrens causes a condition known as relapsing fever. Taxonomy of Clinically Relevant Microorganisms lists the genera, species, and related diseases for spirochetes.

The gram-negative nonproteobacteria of the genera Cytophaga, Fusobacterium, and Bacteroides are classified together as a phylum and called the CFB group. Although they are phylogenetically diverse, bacteria of the CFB group share some similarities in the sequence of nucleotides in their DNA. They are rod-shaped bacteria adapted to anaerobic environments, such as the tissue of the gums, gut, and rumen of ruminating animals. CFB bacteria are avid fermenters, able to process cellulose in rumen, thus enabling ruminant animals to obtain carbon and energy from grazing. 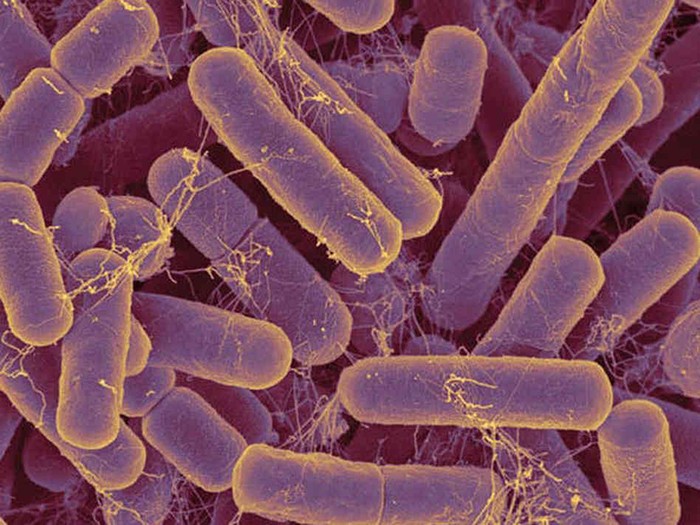 Figure 2. Bacteroides comprise up to 30% of the normal microbiota in the human gut. (credit: NOAA)

Cytophaga are motile aquatic bacteria that glide. Fusobacteria inhabit the human mouth and may cause severe infectious diseases. The largest genus of the CFB group is Bacteroides, which includes dozens of species that are prevalent inhabitants of the human large intestine, making up about 30% of the entire gut microbiome (Figure 2). One gram of human feces contains up to 100 billion Bacteroides cells. Most Bacteroides are mutualistic. They benefit from nutrients they find in the gut, and humans benefit from their ability to prevent pathogens from colonizing the large intestine. Indeed, when populations of Bacteroides are reduced in the gut—as often occurs when a patient takes antibiotics—the gut becomes a more favorable environment for pathogenic bacteria and fungi, which can cause secondary infections.

Only a few species of Bacteroides are pathogenic. B. melaninogenicus, for example, can cause wound infections in patients with weakened immune systems.

The Planctomycetes are found in aquatic environments, inhabiting freshwater, saltwater, and brackish water. Planctomycetes are unusual in that they reproduce by budding, meaning that instead of one maternal cell splitting into two equal daughter cells in the process of binary fission, the mother cell forms a bud that detaches from the mother cell and lives as an independent cell. These so-called swarmer cells are motile and not attached to a surface. However, they will soon differentiate into sessile (immobile) cells with an appendage called a holdfast that allows them to attach to surfaces in the water (Figure 3). Only the sessile cells are able to reproduce. 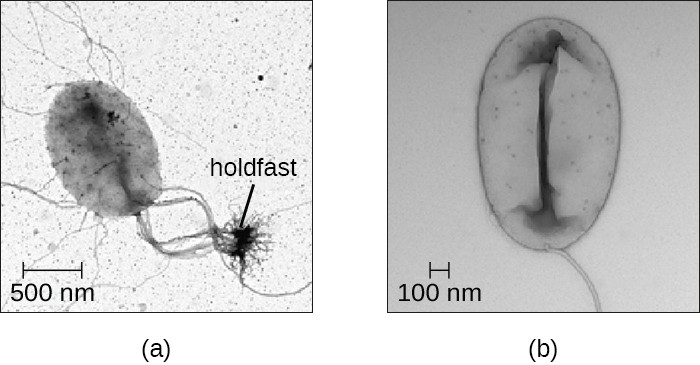 Figure 3. (a) Sessile Planctomycetes have a holdfast that allows them to adhere to surfaces in aquatic environments. (b) Swarmers are motile and lack a holdfast. (credit: modification of work by American Society for Microbiology)

Table 1 summarizes the characteristics of some of the most clinically relevant genera of nonproteobacteria. 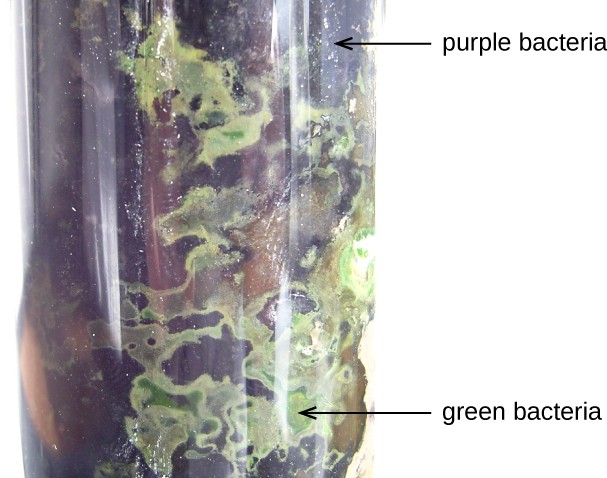 One large group of phototrophic bacteria includes the purple or green bacteria that perform photosynthesis with the help of bacteriochlorophylls, which are green, purple, or blue pigments similar to chlorophyll in plants. Some of these bacteria have a varying amount of red or orange pigments called carotenoids. Their color varies from orange to red to purple to green (Figure 4), and they are able to absorb light of various wavelengths. Traditionally, these bacteria are classified into sulfur and nonsulfur bacteria; they are further differentiated by color.

The sulfur bacteria perform anoxygenic photosynthesis, using sulfites as electron donors and releasing free elemental sulfur. Nonsulfur bacteria use organic substrates, such as succinate and malate, as donors of electrons.

The purple sulfur bacteria oxidize hydrogen sulfide into elemental sulfur and sulfuric acid and get their purple color from the pigments bacteriochlorophylls and carotenoids. Bacteria of the genus Chromatium are purple sulfur Gammaproteobacteria. These microorganisms are strict anaerobes and live in water. They use carbon dioxide as their only source of carbon, but their survival and growth are possible only in the presence of sulfites, which they use as electron donors. Chromatium has been used as a model for studies of bacterial photosynthesis since the 1950s.[1]

The green sulfur bacteria use sulfide for oxidation and produce large amounts of green bacteriochlorophyll. The genus Chlorobium is a green sulfur bacterium that is implicated in climate change because it produces methane, a greenhouse gas. These bacteria use at least four types of chlorophyll for photosynthesis. The most prevalent of these, bacteriochlorophyll, is stored in special vesicle-like organelles called chlorosomes.

The green nonsulfur bacteria are similar to green sulfur bacteria but they use substrates other than sulfides for oxidation. Chloroflexus is an example of a green nonsulfur bacterium. It often has an orange color when it grows in the dark, but it becomes green when it grows in sunlight. It stores bacteriochlorophyll in chlorosomes, similar to Chlorobium, and performs anoxygenic photosynthesis, using organic sulfites (low concentrations) or molecular hydrogen as electron donors, so it can survive in the dark if oxygen is available. Chloroflexus does not have flagella but can glide, like Cytophaga. It grows at a wide range of temperatures, from 35 °C to 70 °C, thus can be thermophilic.

Another large, diverse group of phototrophic bacteria compose the phylum Cyanobacteria; they get their blue-green color from the chlorophyll contained in their cells (Figure 5). Species of this group perform oxygenic photosynthesis, producing megatons of gaseous oxygen. Scientists hypothesize that cyanobacteria played a critical role in the change of our planet’s anoxic atmosphere 1–2 billion years ago to the oxygen-rich environment we have today.[3]

Figure 5. (a) Microcystis aeruginosa is a type of cyanobacteria commonly found in freshwater environments. (b) In warm temperatures, M. aeruginosa and other cyanobacteria can multiply rapidly and produce neurotoxins, resulting in blooms that are harmful to fish and other aquatic animals. (credit a: modification of work by Dr. Barry H. Rosen/U.S. Geological Survey; credit b: modification of work by NOAA)

Cyanobacteria have other remarkable properties. Amazingly adaptable, they thrive in many habitats, including marine and freshwater environments, soil, and even rocks. They can live at a wide range of temperatures, even in the extreme temperatures of the Antarctic. They can live as unicellular organisms or in colonies, and they can be filamentous, forming sheaths or biofilms. Many of them fix nitrogen, converting molecular nitrogen into nitrites and nitrates that other bacteria, plants, and animals can use. The reactions of nitrogen fixation occur in specialized cells called heterocysts.

Photosynthesis in Cyanobacteria is oxygenic, using the same type of chlorophyll a found in plants and algae as the primary photosynthetic pigment. Cyanobacteria also use phycocyanin and cyanophycin, two secondary photosynthetic pigments that give them their characteristic blue color. They are located in special organelles called phycobilisomes and in folds of the cellular membrane called thylakoids, which are remarkably similar to the photosynthetic apparatus of plants. Scientists hypothesize that plants originated from endosymbiosis of ancestral eukaryotic cells and ancestral photosynthetic bacteria.[4] Cyanobacteria are also an interesting object of research in biochemistry,[5] with studies investigating their potential as biosorbents[6] and products of human nutrition.[7]

Unfortunately, cyanobacteria can sometimes have a negative impact on human health. Genera such as Microcystis can form harmful cyanobacterial blooms, forming dense mats on bodies of water and producing large quantities of toxins that can harm wildlife and humans. These toxins have been implicated in tumors of the liver and diseases of the nervous system in animals and humans.[8]

Which of the following is the organelle that spirochetes use to propel themselves?

Show Answer
Answer b. Spirochetes use the axial filament to propel themselves.

Which of the following bacteria are the most prevalent in the human gut?

Show Answer
Answer d. Bacteroides are the most prevalent in the human gut.

Which of the following refers to photosynthesis performed by bacteria with the use of water as the donor of electrons?

Show Answer
Answer a. The term “oxygenic” refers to photosynthesis performed by bacteria with the use of water as the donor of electrons?

The bacterium that causes syphilis is called ________.

Bacteria in the genus Rhodospirillum that use hydrogen for oxidation and fix nitrogen are ________ bacteria.

Show Answer
Bacteria in the genus Rhodospirillum that use hydrogen for oxidation and fix nitrogen are purple nonsulfur bacteria.