Other Environmental Conditions that Affect Growth

Microorganisms interact with their environment along more dimensions than pH, temperature, and free oxygen levels, although these factors require significant adaptations. We also find microorganisms adapted to varying levels of salinity, barometric pressure, humidity, and light. 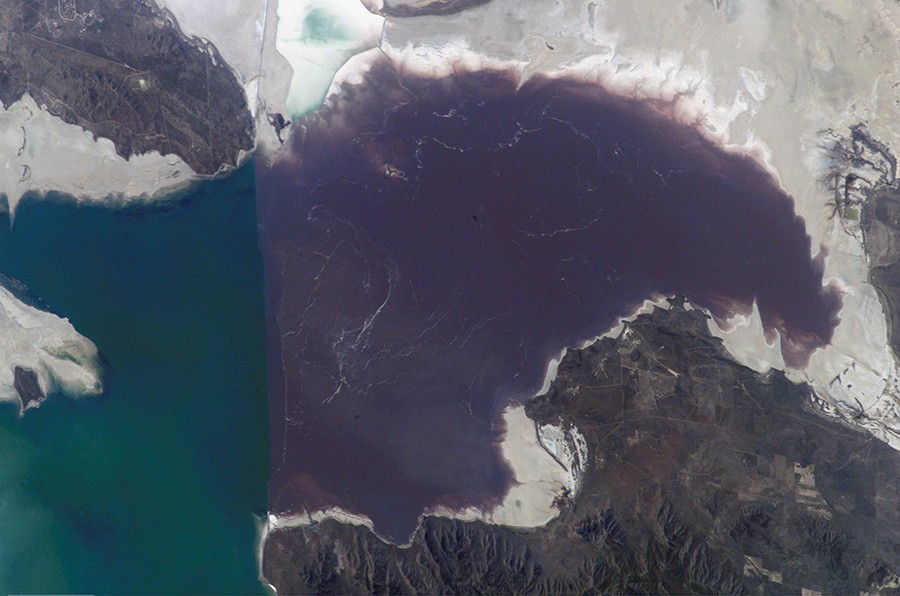 Figure 1. Photograph taken from space of the Great Salt Lake in Utah. The purple color is caused by high density of the alga Dunaliella and the archaean Halobacterium spp. (credit: NASA)

Most natural environments tend to have lower solute concentrations than the cytoplasm of most microorganisms. Rigid cell walls protect the cells from bursting in a dilute environment. Not much protection is available against high osmotic pressure. In this case, water, following its concentration gradient, flows out of the cell. This results in plasmolysis (the shrinking of the protoplasm away from the intact cell wall) and cell death. This fact explains why brines and layering meat and fish in salt are time-honored methods of preserving food. Microorganisms called halophiles (“salt loving”) actually require high salt concentrations for growth. These organisms are found in marine environments where salt concentrations hover at 3.5%. Extreme halophilic microorganisms, such as the red alga Dunaliella salina and the archaeal species Halobacterium in Figure 1, grow in hypersaline lakes such as the Great Salt Lake, which is 3.5–8 times saltier than the ocean, and the Dead Sea, which is 10 times saltier than the ocean.

Dunaliella spp. counters the tremendous osmotic pressure of the environment with a high cytoplasmic concentration of glycerol and by actively pumping out salt ions. Halobacterium spp. accumulates large concentrations of K+ and other ions in its cytoplasm. Its proteins are designed for high salt concentrations and lose activity at salt concentrations below 1–2 M. Although most halotolerant organisms, for example Halomonas spp. in salt marshes, do not need high concentrations of salt for growth, they will survive and divide in the presence of high salt. Not surprisingly, the staphylococci, micrococci, and corynebacteria that colonize our skin tolerate salt in their environment. Halotolerant pathogens are an important cause of food-borne illnesses because they survive and multiply in salty food. For example, the halotolerant bacteria S. aureus, Bacillus cereus, and V. cholerae produce dangerous enterotoxins and are major causes of food poisoning.

Microorganisms depend on available water to grow. Available moisture is measured as water activity (aw), which is the ratio of the vapor pressure of the medium of interest to the vapor pressure of pure distilled water; therefore, the aw of water is equal to 1.0. Bacteria require high aw (0.97–0.99), whereas fungi can tolerate drier environments; for example, the range of aw for growth of Aspergillus spp. is 0.8–0.75. Decreasing the water content of foods by drying, as in jerky, or through freeze-drying or by increasing osmotic pressure, as in brine and jams, are common methods of preventing spoilage.

Microorganisms that require high atmospheric pressure for growth are called barophiles. The bacteria that live at the bottom of the ocean must be able to withstand great pressures. Because it is difficult to retrieve intact specimens and reproduce such growth conditions in the laboratory, the characteristics of these microorganisms are largely unknown.

Photoautotrophs, such as cyanobacteria or green sulfur bacteria, and photoheterotrophs, such as purple nonsulfur bacteria, depend on sufficient light intensity at the wavelengths absorbed by their pigments to grow and multiply. Energy from light is captured by pigments and converted into chemical energy that drives carbon fixation and other metabolic processes. The portion of the electromagnetic spectrum that is absorbed by these organisms is defined as photosynthetically active radiation (PAR). It lies within the visible light spectrum ranging from 400 to 700 nanometers (nm) and extends in the near infrared for some photosynthetic bacteria. A number of accessory pigments, such as fucoxanthin in brown algae and phycobilins in cyanobacteria, widen the useful range of wavelengths for photosynthesis and compensate for the low light levels available at greater depths of water. Other microorganisms, such as the archaea of the class Halobacteria, use light energy to drive their proton and sodium pumps. The light is absorbed by a pigment protein complex called bacteriorhodopsin, which is similar to the eye pigment rhodopsin. Photosynthetic bacteria are present not only in aquatic environments but also in soil and in symbiosis with fungi in lichens. The peculiar watermelon snow is caused by a microalga Chlamydomonas nivalis, a green alga rich in a secondary red carotenoid pigment (astaxanthin) which gives the pink hue to the snow where the alga grows.

Which of the following is the reason jams and dried meats often do not require refrigeration to prevent spoilage?

Show Answer
Answer d. Jams and dried meats often do not require refrigeration to prevent spoilage due to their low water activity.

Bacteria living in salt marshes are most likely which of the following?

A bacterium that thrives in the Great Salt Lake but not in fresh water is probably a ________.

Show Answer
A bacterium that thrives in the Great Salt Lake but not in fresh water is probably a halophile.

Bacteria isolated from the bottom of the ocean need high atmospheric pressures to survive. They are ________.

Show Answer
Bacteria isolated from the bottom of the ocean need high atmospheric pressures to survive. They are barophiles.

Staphylococcus aureus can be grown on multipurpose growth medium or on mannitol salt agar that contains 7.5% NaCl. The bacterium is ________.

Show Answer
Staphylococcus aureus can be grown on multipurpose growth medium or on mannitol salt agar that contains 7.5% NaCl. The bacterium is halotolerant.

Fish sauce is a salty condiment produced using fermentation. What type of organism is likely responsible for the fermentation of the fish sauce?