Several of the cell types discussed in the previous section can be described as phagocytes—cells whose main function is to seek, ingest, and kill pathogens. This process, called phagocytosis, was first observed in starfish in the 1880s by Nobel Prize-winning zoologist Ilya Metchnikoff (1845–1916), who made the connection to white blood cells (WBCs) in humans and other animals. At the time, Pasteur and other scientists believed that WBCs were spreading pathogens rather than killing them (which is true for some diseases, such as tuberculosis). But in most cases, phagocytes provide a strong, swift, and effective defense against a broad range of microbes, making them a critical component of innate nonspecific immunity. This section will focus on the mechanisms by which phagocytes are able to seek, recognize, and destroy pathogens.

Some phagocytes are leukocytes (WBCs) that normally circulate in the bloodstream. To reach pathogens located in infected tissue, leukocytes must pass through the walls of small capillary blood vessels within tissues. This process, called extravasation, or diapedesis, is initiated by complement factor C5a, as well as cytokines released into the immediate vicinity by resident macrophages and tissue cells responding to the presence of the infectious agent (Figure 1). Similar to C5a, many of these cytokines are proinflammatory and chemotactic, and they bind to cells of small capillary blood vessels, initiating a response in the endothelial cells lining the inside of the blood vessel walls. This response involves the upregulation and expression of various cellular adhesion molecules and receptors. Leukocytes passing through will stick slightly to the adhesion molecules, slowing down and rolling along the blood vessel walls near the infected area. When they reach a cellular junction, they will bind to even more of these adhesion molecules, flattening out and squeezing through the cellular junction in a process known as transendothelial migration. This mechanism of “rolling adhesion” allows leukocytes to exit the bloodstream and enter the infected areas, where they can begin phagocytosing the invading pathogens.

Note that extravasation does not occur in arteries or veins. These blood vessels are surrounded by thicker, multilayer protective walls, in contrast to the thin single-cell-layer walls of capillaries. Furthermore, the blood flow in arteries is too turbulent to allow for rolling adhesion. Also, some leukocytes tend to respond to an infection more quickly than others. The first to arrive typically are neutrophils, often within hours of a bacterial infection. By contract, monocytes may take several days to leave the bloodstream and differentiate into macrophages. 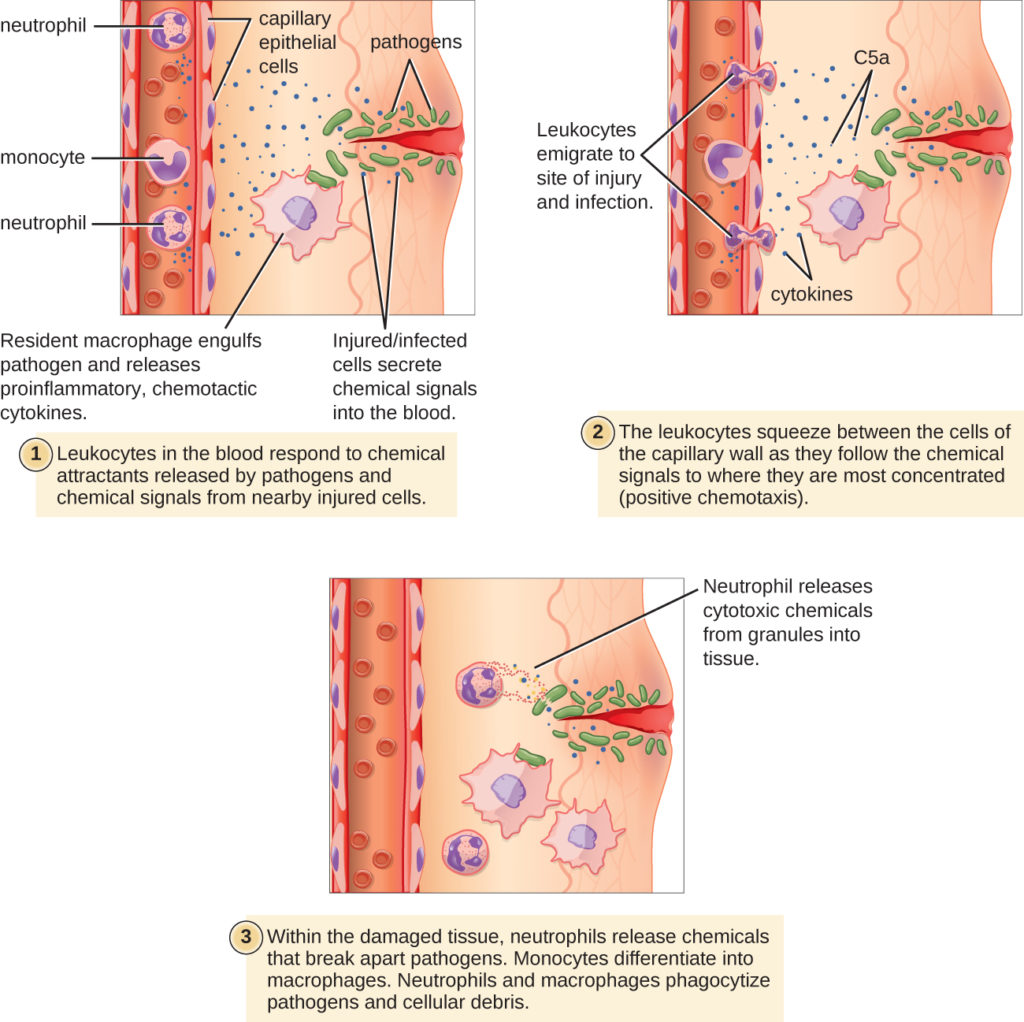 Figure 1. Click for a larger image. Damaged cells and macrophages that have ingested pathogens release cytokines that are proinflammatory and chemotactic for leukocytes. In addition, activation of complement at the site of infection results in production of the chemotactic and proinflammatory C5a. Leukocytes exit the blood vessel and follow the chemoattractant signal of cytokines and C5a to the site of infection. Granulocytes such as neutrophils release chemicals that destroy pathogens. They are also capable of phagocytosis and intracellular killing of bacterial pathogens.

Watch the following videos on leukocyte extravasation and leukocyte rolling to learn more:

As described in the previous section, opsonization of pathogens by antibody; complement factors C1q, C3b, and C4b; and lectins can assist phagocytic cells in recognition of pathogens and attachment to initiate phagocytosis. However, not all pathogen recognition is opsonin dependent. Phagocytes can also recognize molecular structures that are common to many groups of pathogenic microbes. Such structures are called pathogen-associated molecular patterns (PAMPs). Common PAMPs include the following:

Like numerous other PAMPs, these substances are integral to the structure of broad classes of microbes. 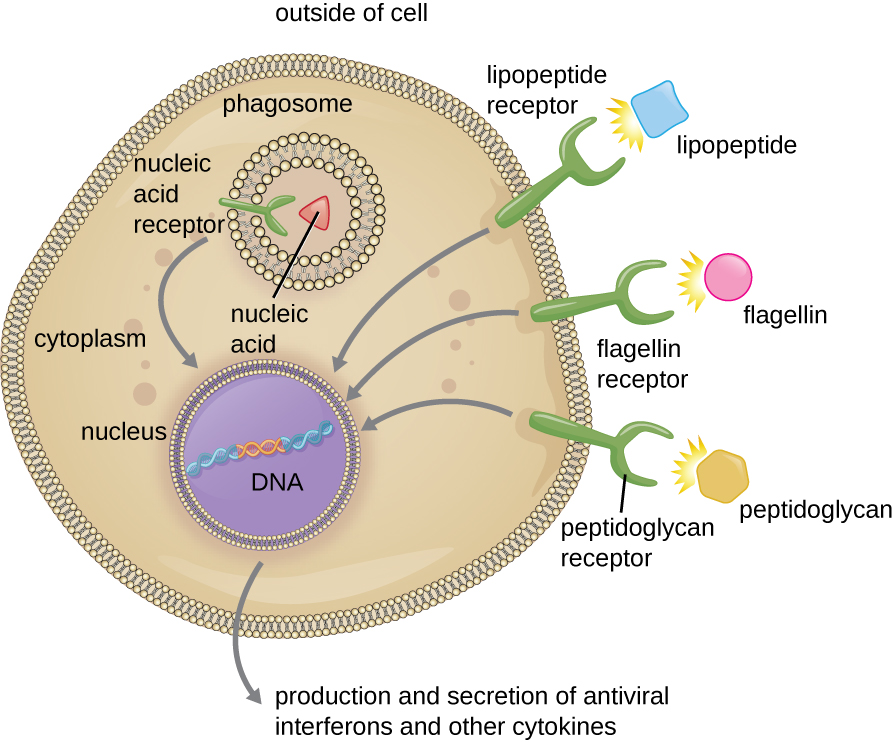 Figure 2. Click for a larger image. Phagocytic cells contain pattern recognition receptors (PRRs) capable of recognizing various pathogen-associated molecular patterns (PAMPs). These PRRs can be found on the plasma membrane or in internal phagosomes. When a PRR recognizes a PAMP, it sends a signal to the nucleus that activates genes involved in phagocytosis, cellular proliferation, production and secretion of antiviral interferons and proinflammatory cytokines, and enhanced intracellular killing.

The structures that allow phagocytic cells to detect PAMPs are called pattern recognition receptors (PRRs). One group of PRRs is the toll-like receptors (TLRs), which bind to various PAMPs and communicate with the nucleus of the phagocyte to elicit a response. Many TLRs (and other PRRs) are located on the surface of a phagocyte, but some can also be found embedded in the membranes of interior compartments and organelles (Figure 2). These interior PRRs can be useful for the binding and recognition of intracellular pathogens that may have gained access to the inside of the cell before phagocytosis could take place. Viral nucleic acids, for example, might encounter an interior PRR, triggering production of the antiviral cytokine interferon.

In addition to providing the first step of pathogen recognition, the interaction between PAMPs and PRRs on macrophages provides an intracellular signal that activates the phagocyte, causing it to transition from a dormant state of readiness and slow proliferation to a state of hyperactivity, proliferation, production/secretion of cytokines, and enhanced intracellular killing. PRRs on macrophages also respond to chemical distress signals from damaged or stressed cells. This allows macrophages to extend their responses beyond protection from infectious diseases to a broader role in the inflammatory response initiated from injuries or other diseases.

Once pathogen recognition and attachment occurs, the pathogen is engulfed in a vesicle and brought into the internal compartment of the phagocyte in a process called phagocytosis (Figure 3). PRRs can aid in phagocytosis by first binding to the pathogen’s surface, but phagocytes are also capable of engulfing nearby items even if they are not bound to specific receptors. To engulf the pathogen, the phagocyte forms a pseudopod that wraps around the pathogen and then pinches it off into a membrane vesicle called a phagosome. Acidification of the phagosome (pH decreases to the range of 4–5) provides an important early antibacterial mechanism. The phagosome containing the pathogen fuses with one or more lysosomes, forming a phagolysosome. Formation of the phagolysosome enhances the acidification, which is essential for activation of pH-dependent digestive lysosomal enzymes and production of hydrogen peroxide and toxic reactive oxygen species. Lysosomal enzymes such as lysozyme, phospholipase, and proteases digest the pathogen. Other enzymes are involved a respiratory burst. During the respiratory burst, phagocytes will increase their uptake and consumption of oxygen, but not for energy production. The increased oxygen consumption is focused on the production of superoxide anion, hydrogen peroxide, hydroxyl radicals, and other reactive oxygen species that are antibacterial. 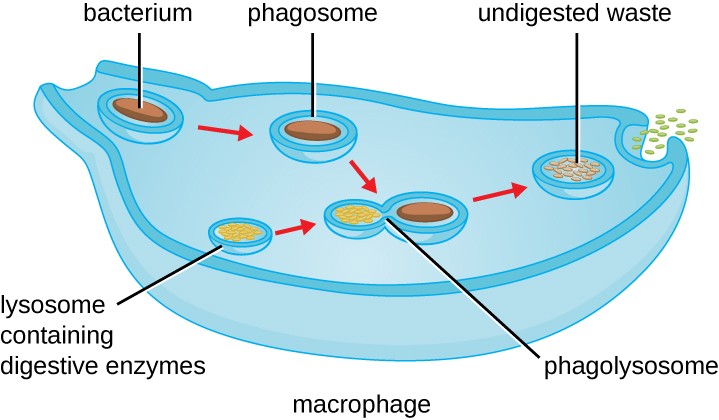 Figure 3. The stages of phagocytosis include the engulfment of a pathogen, the formation of a phagosome, the digestion of the pathogenic particle in the phagolysosome, and the expulsion of undigested materials from the cell.

In addition to the reactive oxygen species produced by the respiratory burst, reactive nitrogen compounds with cytotoxic (cell-killing) potential can also form. For example, nitric oxide can react with superoxide to form peroxynitrite, a highly reactive nitrogen compound with degrading capabilities similar to those of the reactive oxygen species. Some phagocytes even contain an internal storehouse of microbicidal defensin proteins (e.g., neutrophil granules). These destructive forces can be released into the area around the cell to degrade microbes externally. Neutrophils, especially, can be quite efficient at this secondary antimicrobial mechanism.

Once degradation is complete, leftover waste products are excreted from the cell in an exocytic vesicle. However, it is important to note that not all remains of the pathogen are excreted as waste. Macrophages and dendritic cells are also antigen-presenting cells involved in the specific adaptive immune response. These cells further process the remains of the degraded pathogen and present key antigens (specific pathogen proteins) on their cellular surface. This is an important step for stimulation of some adaptive immune responses, as will be discussed in more detail in the next chapter.

Visit this link to view a phagocyte chasing and engulfing a pathogen.

Although phagocytosis successfully destroys many pathogens, some are able to survive and even exploit this defense mechanism to multiply in the body and cause widespread infection. Protozoans of the genus Leishmania are one example. These obligate intracellular parasites are flagellates transmitted to humans by the bite of a sand fly. Infections cause serious and sometimes disfiguring sores and ulcers in the skin and other tissues (Figure 4). Worldwide, an estimated 1.3 million people are newly infected with leishmaniasis annually.[1] 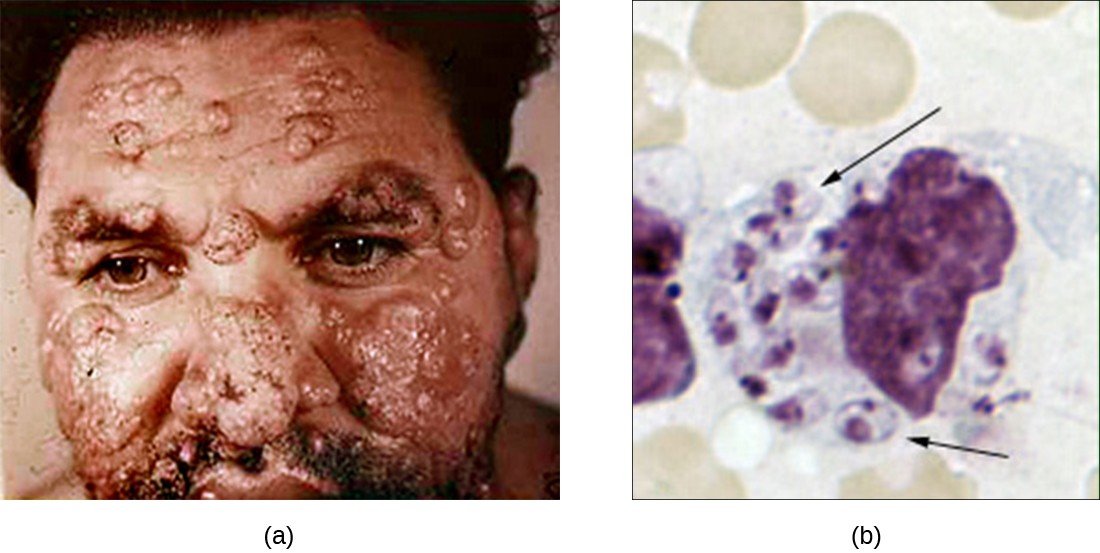 Figure 4. (a) Cutaneous leishmaniasis is a disfiguring disease caused by the intracellular flagellate Leishmania tropica, transmitted by the bite of a sand fly. (b) This light micrograph of a sample taken from a skin lesion shows a large cell, which is a macrophage infected with L. tropica amastigotes (arrows). The amastigotes have lost their flagella but their nuclei are visible. Soon the amastigotes will lyse the macrophage and be engulfed by other phagocytes, spreading the infection. (credit a: modification of work by Otis Historical Archives of “National Museum of Health & Medicine”; credit b: modification of work by Centers for Disease Control and Prevention)

Salivary peptides from the sand fly activate host macrophages at the site of their bite. The classic or alternate pathway for complement activation ensues with C3b opsonization of the parasite. Leishmania cells are phagocytosed, lose their flagella, and multiply in a form known as an amastigote (Leishman-Donovan body) within the phagolysosome. Although many other pathogens are destroyed in the phagolysosome, survival of the Leishmania amastigotes is maintained by the presence of surface lipophosphoglycan and acid phosphatase. These substances inhibit the macrophage respiratory burst and lysosomal enzymes. The parasite then multiplies inside the cell and lyses the infected macrophage, releasing the amastigotes to infect other macrophages within the same host. Should another sand fly bite an infected person, it might ingest amastigotes and then transmit them to another individual through another bite.

There are several different forms of leishmaniasis. The most common is a localized cutaneous form of the illness caused by L. tropica, which typically resolves spontaneously over time but with some significant lymphocyte infiltration and permanent scarring. A mucocutaneous form of the disease, caused by L. viannia brasilienfsis, produces lesions in the tissue of the nose and mouth and can be life threatening. A visceral form of the illness can be caused by several of the different Leishmania species. It affects various organ systems and causes abnormal enlargement of the liver and spleen. Irregular fevers, anemia, liver dysfunction, and weight loss are all signs and symptoms of visceral leishmaniasis. If left untreated, it is typically fatal.

PAMPs would be found on the surface of which of the following?

Show Answer
Answer a. PAMPs would be found on the surface of a pathogen.

________ on phagocytes bind to PAMPs on bacteria, which triggers the uptake and destruction of the bacterial pathogens?

Show Answer
Answer a. PRRs on phagocytes bind to PAMPs on bacteria.

Which of the following best characterizes the mode of pathogen recognition for opsonin-dependent phagocytosis?

Show Answer
Answer c. A pathogen is first coated with a molecule such as a complement protein, which allows it to be recognized by phagocytes.

________, also known as diapedesis, refers to the exit from the bloodstream of neutrophils and other circulating leukocytes.

Show Answer
Extravasation, also known as diapedesis, refers to the exit from the bloodstream of neutrophils and other circulating leukocytes.

Briefly summarize the events leading up to and including the process of transendothelial migration.