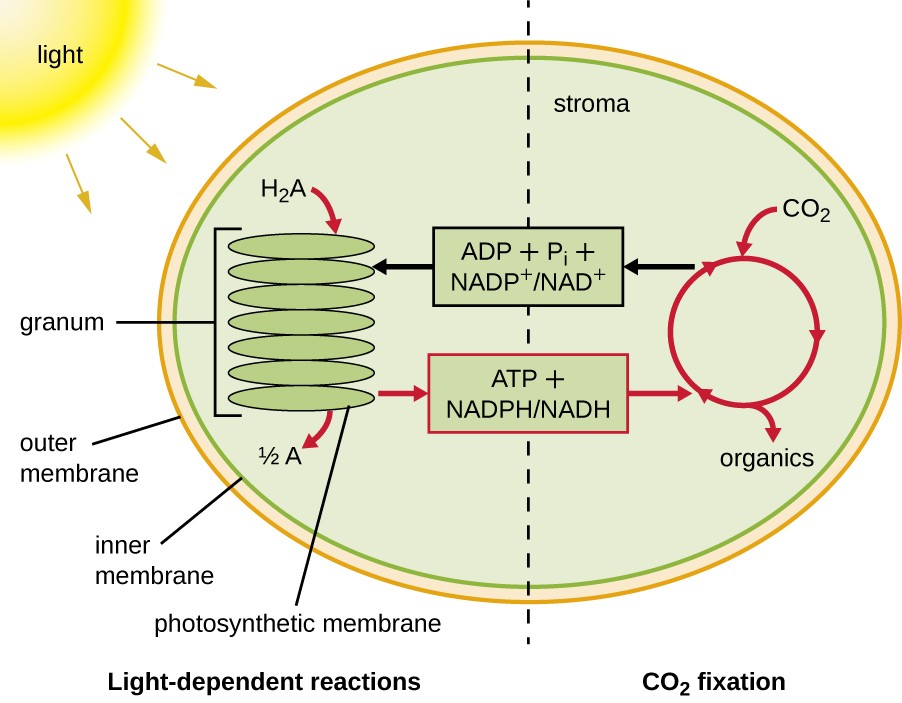 Photosynthetic Structures in Eukaryotes and Prokaryotes

Figure 2. (a) Photosynthesis in eukaryotes takes place in chloroplasts, which contain thylakoids stacked into grana. (b) A photosynthetic prokaryote has infolded regions of the plasma membrane that function like thylakoids. (credit: scale bar data from Matt Russell.)

Photosynthetic membranes in prokaryotes, by contrast, are not organized into distinct membrane-enclosed organelles; rather, they are infolded regions of the plasma membrane. In cyanobacteria, for example, these infolded regions are also referred to as thylakoids. In either case, embedded within the thylakoid membranes or other photosynthetic bacterial membranes are photosynthetic pigment molecules organized into one or more photosystems, where light energy is actually converted into chemical energy.

Photosynthetic pigments within the photosynthetic membranes are organized into photosystems, each of which is composed of a light-harvesting (antennae) complex and a reaction center. The light-harvesting complex consists of multiple proteins and associated pigments that each may absorb light energy and, thus, become excited. This energy is transferred from one pigment molecule to another until eventually (after about a millionth of a second) it is delivered to the reaction center. Up to this point, only energy—not electrons—has been transferred between molecules. The reaction center contains a pigment molecule that can undergo oxidation upon excitation, actually giving up an electron. It is at this step in photosynthesis that light energy is converted into an excited electron.

Different kinds of light-harvesting pigments absorb unique patterns of wavelengths (colors) of visible light. Pigments reflect or transmit the wavelengths they cannot absorb, making them appear the corresponding color. Examples of photosynthetic pigments (molecules used to absorb solar energy) are bacteriochlorophylls (green, purple, or red), carotenoids (orange, red, or yellow), chlorophylls (green), phycocyanins (blue), and phycoerythrins (red). By having mixtures of pigments, an organism can absorb energy from more wavelengths. Because photosynthetic bacteria commonly grow in competition for sunlight, each type of photosynthetic bacteria is optimized for harvesting the wavelengths of light to which it is commonly exposed, leading to stratification of microbial communities in aquatic and soil ecosystems by light quality and penetration.

Once the light harvesting complex transfers the energy to the reaction center, the reaction center delivers its high-energy electrons, one by one, to an electron carrier in an electron transport system, and electron transfer through the ETS is initiated. The ETS is similar to that used in cellular respiration and is embedded within the photosynthetic membrane. Ultimately, the electron is used to produce NADH or NADPH. The electrochemical gradient that forms across the photosynthetic membrane is used to generate ATP by chemiosmosis through the process of photophosphorylation, another example of oxidative phosphorylation (Figure 3).

Figure 3. This figure summarizes how a photosystem works. Light harvesting (LH) pigments absorb light energy, converting it to chemical energy. The energy is passed from one LH pigment to another until it reaches a reaction center (RC) pigment, exciting an electron. This high-energy electron is lost from the RC pigment and passed through an electron transport system (ETS), ultimately producing NADH or NADPH and ATP. A reduced molecule (H2A) donates an electron, replacing electrons to the electron-deficient RC pigment. 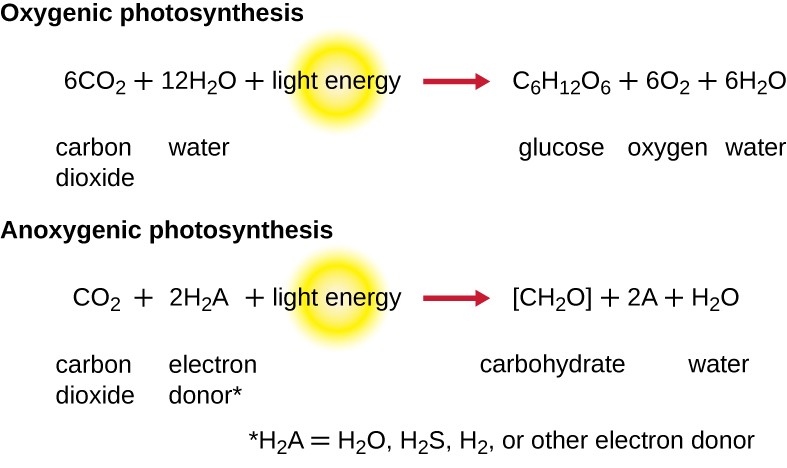 Photosystems have been classified into two types: photosystem I (PSI) and photosystem II (PSII) (Figure 5). Cyanobacteria and plant chloroplasts have both photosystems, whereas anoxygenic photosynthetic bacteria use only one of the photosystems. Both photosystems are excited by light energy simultaneously. If the cell requires both ATP and NADPH for biosynthesis, then it will carry out noncyclic photophosphorylation. Upon passing of the PSII reaction center electron to the ETS that connects PSII and PSI, the lost electron from the PSII reaction center is replaced by the splitting of water. The excited PSI reaction center electron is used to reduce NADP+ to NADPH and is replaced by the electron exiting the ETS. The flow of electrons in this way is called the Z-scheme.

If a cell’s need for ATP is significantly greater than its need for NADPH, it may bypass the production of reducing power through cyclic photophosphorylation. Only PSI is used during cyclic photophosphorylation; the high-energy electron of the PSI reaction center is passed to an ETS carrier and then ultimately returns to the oxidized PSI reaction center pigment, thereby reducing it.

Figure 6. Click to see a larger image. (a) PSI and PSII are found on the thylakoid membrane. The high-energy electron from PSII is passed to an ETS, which generates a proton motive force for ATP synthesis by chemiosmosis, and ultimately replaces the electron lost by the PSI reaction center. The PSI reaction center electron is used to make NADPH. (b) When both ATP and NADPH are required, noncyclic photophosphorylation (in cyanobacteria and plants) provides both. The electron flow described here is referred to as the Z-scheme (shown in yellow in [a]). When the cell’s ATP needs outweigh those for NADPH, cyanobacteria and plants will use only PSI, and its reaction center electron is passed to the ETS to generate a proton motive force used for ATP synthesis.

After the energy from the sun is converted into chemical energy and temporarily stored in ATP and NADPH molecules (having lifespans of millionths of a second), photoautotrophs have the fuel needed to build multicarbon carbohydrate molecules, which can survive for hundreds of millions of years, for long-term energy storage. The carbon comes from CO2, the gas that is a waste product of cellular respiration.

The Calvin-Benson cycle (named for Melvin Calvin [1911–1997] and Andrew Benson [1917–2015]), the biochemical pathway used for fixation of CO2, is located within the cytoplasm of photosynthetic bacteria and in the stroma of eukaryotic chloroplasts. The light-independent reactions of the Calvin cycle can be organized into three basic stages: fixation, reduction, and regeneration (see Metabolic Pathways for a detailed illustration of the Calvin cycle).

During the light-dependent reactions, which molecule loses an electron?

Show Answer
Answer b. During the light-dependent reactions, a reaction center pigment molecule loses an electron.

In prokaryotes, in which direction are hydrogen ions pumped by the electron transport system of photosynthetic membranes?

Show Answer
Answer b. In prokaryotes, hydrogen ions are pumped by the electron transport system of photosynthetic membranes toward the inside (cytoplasm) of the cell.

Which of the following does not occur during cyclic photophosphorylation in cyanobacteria?

Which are two products of the light-dependent reactions?

Show Answer
Answer b. The two products of the light-dependent reactions are NADPH and ATP.

Photosynthesis always results in the formation of oxygen.

The enzyme responsible for CO2 fixation during the Calvin cycle is called ________.

Show Answer
The types of pigment molecules found in plants, algae, and cyanobacteria are chlorophylls and carotenoids.