Protozoan Infections of the Gastrointestinal Tract

Like other microbes, protozoa are abundant in natural microbiota but can also be associated with significant illness. Gastrointestinal diseases caused by protozoa are generally associated with exposure to contaminated food and water, meaning that those without access to good sanitation are at greatest risk. Even in developed countries, infections can occur and these microbes have sometimes caused significant outbreaks from contamination of public water supplies.

Also called backpacker’s diarrhea or beaver fever, giardiasis is a common disease in the United States caused by the flagellated protist Giardia lamblia, also known as Giardia intestinalis or Giardia duodenalis (Figure 5 in Types of Microorganisms). To establish infection, G. lamblia uses a large adhesive disk to attach to the intestinal mucosa. The disk is comprised of microtubules. During adhesion, the flagella of G. lamblia move in a manner that draws fluid out from under the disk, resulting in an area of lower pressure that promotes its adhesion to the intestinal epithelial cells. Due to its attachment, Giardia also blocks absorption of nutrients, including fats.

Transmission occurs through contaminated food or water or directly from person to person. Children in day-care centers are at risk due to their tendency to put items into their mouths that may be contaminated. Large outbreaks may occur if a public water supply becomes contaminated. Giardia have a resistant cyst stage in their life cycle that is able to survive cold temperatures and the chlorination treatment typically used for drinking water in municipal reservoirs. As a result, municipal water must be filtered to trap and remove these cysts. Once consumed by the host, Giardia develops into the active tropozoite.

Infected individuals may be asymptomatic or have gastrointestinal signs and symptoms, sometimes accompanied by weight loss. Common symptoms, which appear one to three weeks after exposure, include diarrhea, nausea, stomach cramps, gas, greasy stool (because fat absorption is being blocked), and possible dehydration. The parasite remains in the colon and does not cause systemic infection. Signs and symptoms generally clear within two to six weeks. Chronic infections may develop and are often resistant to treatment. These are associated with weight loss, episodic diarrhea, and malabsorption syndrome due to the blocked nutrient absorption.

Diagnosis may be made using observation under the microscope. A stool ova and parasite (O&P) exam involves direct examination of a stool sample for the presence of cysts and trophozoites; it can be used to distinguish common parasitic intestinal infections. ELISA and other immunoassay tests, including commercial direct fluorescence antibody kits, are also used. The most common treatments use metronidazole as the first-line choice, followed by tinidazole. If the infection becomes chronic, the parasites may become resistant to medications. 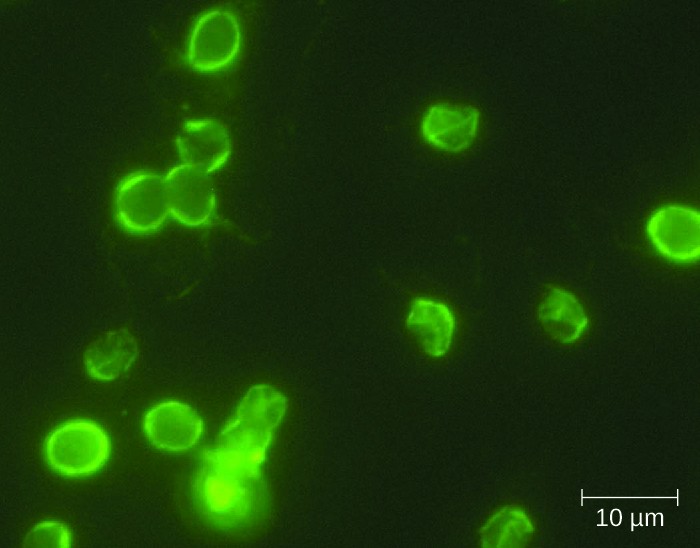 Another protozoan intestinal illness is cryptosporidiosis, which is usually caused by Cryptosporidium parvum or C. hominis (Figure 1). These pathogens are commonly found in animals and can be spread in feces from mice, birds, and farm animals. Contaminated water and food are most commonly responsible for transmission. The protozoan can also be transmitted through human contact with infected animals or their feces.

In the United States, outbreaks of cryptosporidiosis generally occur through contamination of the public water supply or contaminated water at water parks, swimming pools, and day-care centers. The risk is greatest in areas with poor sanitation, making the disease more common in developing countries.

Signs and symptoms include watery diarrhea, nausea, vomiting, cramps, fever, dehydration, and weight loss. The illness is generally self-limiting within a month. However, immunocompromised patients, such as those with HIV/AIDS, are at particular risk of severe illness or death.

The protozoan parasite Entamoeba histolytica causes amoebiasis, which is known as amoebic dysentery in severe cases. E. histolytica is generally transmitted through water or food that has fecal contamination. The disease is most widespread in the developing world and is one of the leading causes of mortality from parasitic disease worldwide. Disease can be caused by as few as 10 cysts being transmitted.

Signs and symptoms range from nonexistent to mild diarrhea to severe amoebic dysentery. Severe infection causes the abdomen to become distended and may be associated with fever. The parasite may live in the colon without causing signs or symptoms or may invade the mucosa to cause colitis. In some cases, the disease spreads to the spleen, brain, genitourinary tract, or lungs. In particular, it may spread to the liver and cause an abscess. When a liver abscess develops, fever, nausea, liver tenderness, weight loss, and pain in the right abdominal quadrant may occur. Chronic infection may occur and is associated with intermittent diarrhea, mucus, pain, flatulence, and weight loss.

Direct examination of fecal specimens may be used for diagnosis. As with cryptosporidiosis, samples are often examined on multiple days. A stool O&P exam of fecal or biopsy specimens may be helpful. Immunoassay, serology, biopsy, molecular, and antibody detection tests are available. Enzyme immunoassay may not distinguish current from past illness. Magnetic resonance imaging (MRI) can be used to detect any liver abscesses. The first line of treatment is metronidazole or tinidazole, followed by diloxanide furoate, iodoquinol, or paromomycin to eliminate the cysts that remain.

The intestinal disease cyclosporiasis is caused by the protozoan Cyclospora cayetanensis. It is endemic to tropical and subtropical regions and therefore uncommon in the United States, although there have been outbreaks associated with contaminated produce imported from regions where the protozoan is more common. 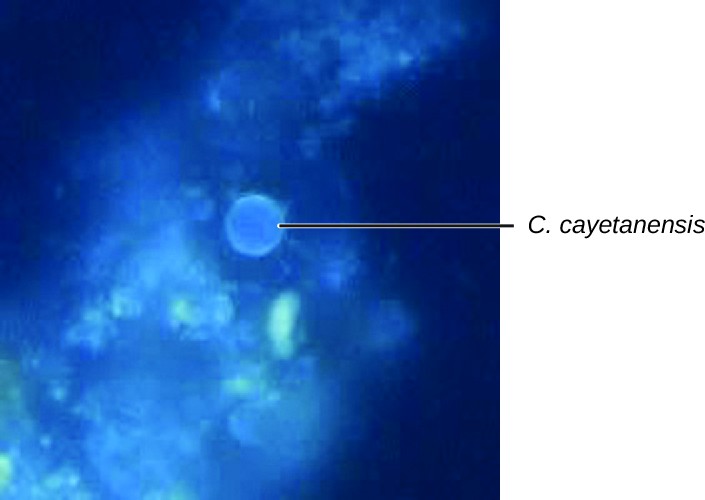 Figure 2. Cyclospora cayetanensis are autofluorescent under ultraviolet light. (credit: modification of work by Centers for Disease Control and Prevention)

This protist is transmitted through contaminated food and water and reaches the lining of the small intestine, where it causes infection. Signs and symptoms begin within seven to ten days after ingestion. Based on limited data, it appears to be seasonal in ways that differ regionally and that are poorly understood.[1]

Some individuals do not develop signs or symptoms. Those who do may exhibit explosive and watery diarrhea, fever, nausea, vomiting, cramps, loss of appetite, fatigue, and bloating. These symptoms may last for months without treatment. Trimethoprim-sulfamethoxazole is the recommended treatment.

Microscopic examination is used for diagnosis. A stool O&P examination may be helpful. The oocysts have a distinctive blue halo when viewed using ultraviolet fluorescence microscopy (Figure 2).

Which protozoan is associated with the ability to cause severe dysentery?

Show Answer
Answer d. Entamoeba histolytica is associated with the ability to cause severe dysentery.

Which protozoan has a unique appearance, with a blue halo, when viewed using ultraviolet fluorescence microscopy?

The micrograph shows protozoans attached to the intestinal wall of a gerbil. Based on what you know about protozoan intestinal parasites, what is it? 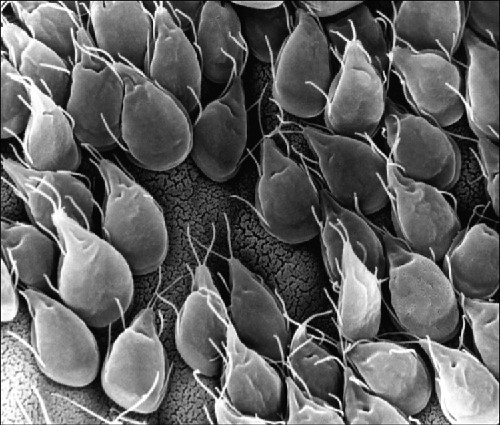 Show Answer
Answer a. This parasite is Giardia lamblia.

Chronic _________ infections cause the unique sign of disease of greasy stool and are often resistant to treatment.

Show Answer
Chronic giardia infections cause the unique sign of disease of greasy stool and are often resistant to treatment.