The following tables list the species, and some higher groups, of pathogenic Eubacteria mentioned in the text. The classification of Bacteria, one of the three domains of life, is in constant flux as relationships become clearer through sampling of genetic sequences. Many groups at all taxonomic levels still have an undetermined relationship with other members of the phylogenetic tree of Bacteria. Bergey’s Manual of Systematics of Archaea and Bacteria maintains a published list and descriptions of prokaryotic species. The tables here follow the taxonomic organization in the Bergey’s Manual Taxonomic Outline.[1]

We have divided the species into tables corresponding to different bacterial phyla. The taxonomic rank of kingdom is not used in prokaryote taxonomy, so the phyla are the subgrouping below domain. Note that many bacterial phyla not represented by these tables. The species and genera are listed only under the class within each phylum. The names given to bacteria are regulated by the International Code of Nomenclature of Bacteria as maintained by the International Committee on Systematics or Prokaryotes.

There are several classification systems for viruses. The International Committee on Taxonomy of Viruses (ICTV) is the international scientific body responsible for the rules of viral classification. The ICTV system used here groups viruses based on genetic similarity and presumed monophyly. The viral classification system is separate from the classification system for cellular organisms. The ICTV system groups viruses within seven orders, which contain related families. There is, presently, a large number of unassigned families with unknown affinities to the seven orders. Three of these orders infect only Eubacteria, Archaea, or plants and do not appear in this table. Some families may be divided into subfamilies. There are also many unassigned genera. Like all taxonomies, viral taxonomy is in constant flux. The latest complete species list and classification can be obtained on the ICTV website.[2] 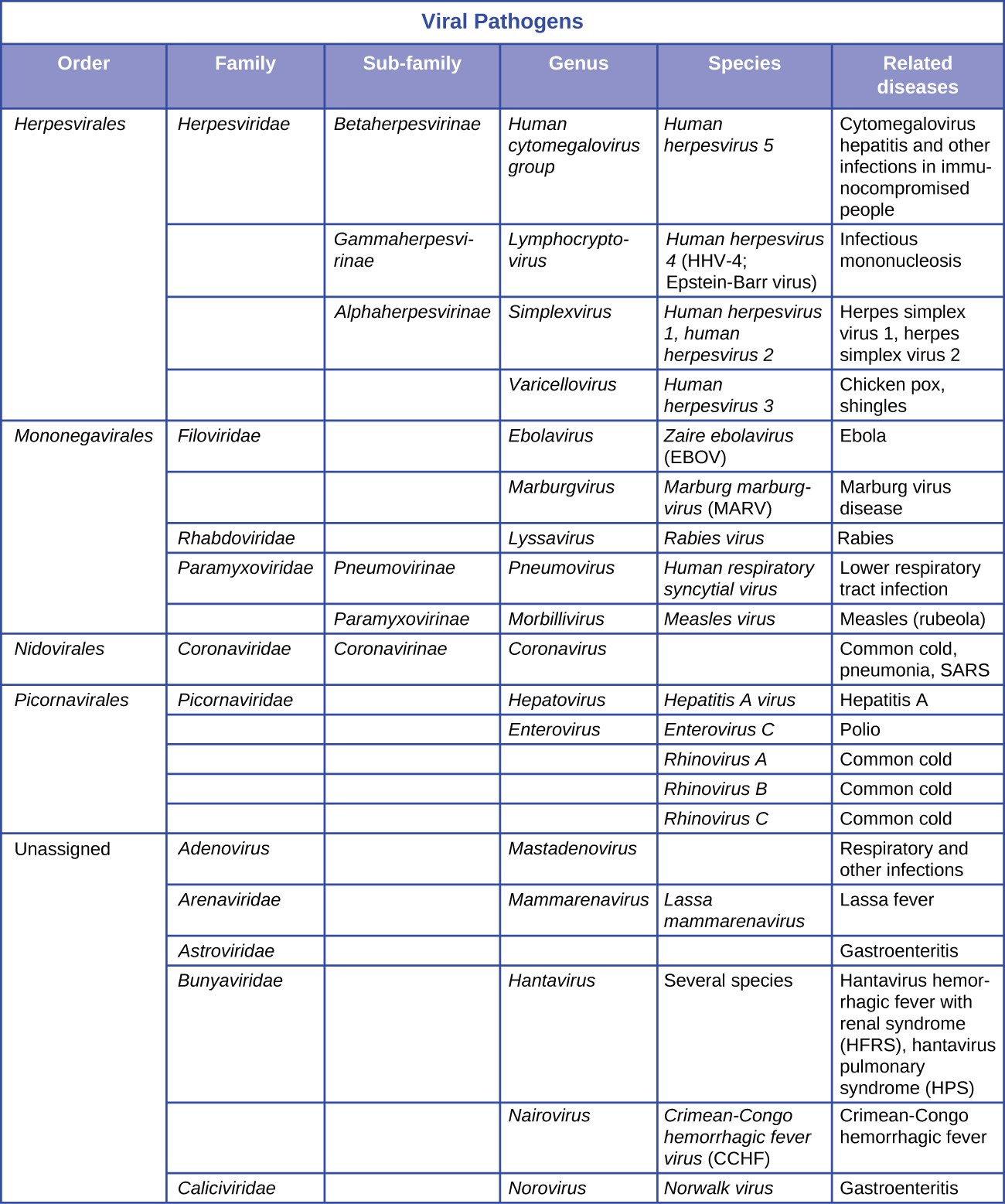 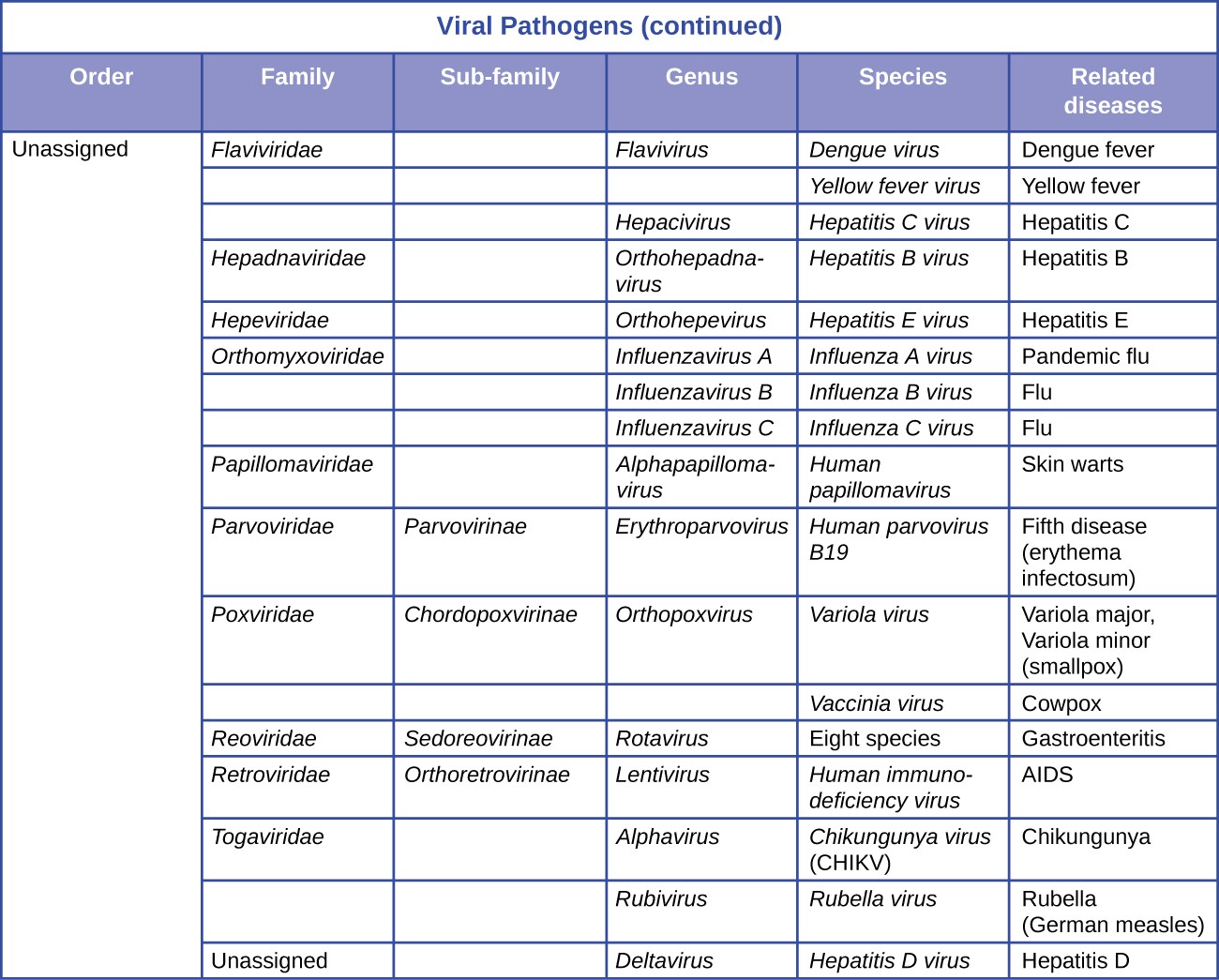 The Fungi are one of the kingdoms of the domain Eukarya. Fungi are most closely related to the animals and a few other small groups and more distantly related to the plants and other groups that formerly were categorized as protist. At present, the Fungi are divided into seven phyla (or divisions, a hold over from when fungi were studied with plants), but there are uncertainties about some relationships.[3] Many groups of fungi, particularly those that were formerly classified in the phylum Zygomycota, which was not monophyletic, have uncertain relationships to the other fungi. The one species listed in this table that falls into this category is Rhizopus arrhizus. Fungal names are governed by the International Code of Nomenclature for Algae, Fungi, and Plants,[4] but the International Commission on the Taxonomy of Fungi (ICTF) also promotes taxonomic work on fungi. One activity of the ICTF is publicizing name changes for medically and otherwise important fungal species. Many species that formerly had two names (one for the sexual form and one for the asexual form) are now being brought together under one name.

The relationships among the organisms (and thus their taxonomy) previously grouped under the name Protists are better understood than they were two or three decades ago, but this is still a work in progress. In 2005, the Eukarya were divided into six supergroups.[5] The latest high-level classification combined two of the previous supergroups to produce a system comprising five supergroups.[6] This classification was developed for the Society of Protozoologists, but it is not the only suggested approach. One of the five supergroups includes the animals, fungi, and some smaller protist groups. Another contains green plants and three algal groups. The other three supergroups (listed in the three tables below) contain the other protists, many of them which cause disease. In addition, there is a large number of protist groups whose relationships are not understood. In the three supergroups represented here we have indicated the phyla to which the listed pathogens belong.

The taxonomy of parasitic worms, all of which belong to the kingdom Animalia still contains many uncertainties. The pathogenic species are found in two phyla: the Nematoda, or roundworms, and the Platyhelminthes, or flat worms. The Nematoda is tentatively divided into two classes[7], one of which, Chromadorea, probably contains unrelated groups. The parasitic flatworms are contained within three classes of flatworm, of which two are important to humans, the trematodes and the cestodes.