When the exploration of Lake Whillans started in Antarctica, researchers did not expect to find much life. Constant subzero temperatures and lack of obvious sources of nutrients did not seem to be conditions that would support a thriving ecosystem. To their surprise, the samples retrieved from the lake showed abundant microbial life. In a different but equally harsh setting, bacteria grow at the bottom of the ocean in sea vents, where temperatures can reach 340 °C (700 °F).

Organisms categorized as mesophiles (“middle loving”) are adapted to moderate temperatures, with optimal growth temperatures ranging from room temperature (about 20 °C) to about 45 °C. As would be expected from the core temperature of the human body, 37 °C (98.6 °F), normal human microbiota and pathogens (e.g., E. coli, Salmonella spp., and Lactobacillus spp.) are mesophiles.

Organisms called psychrotrophs, also known as psychrotolerant, prefer cooler environments, from a high temperature of 25 °C to refrigeration temperature about 4 °C. They are found in many natural environments in temperate climates. They are also responsible for the spoilage of refrigerated food.

This example concludes Nataliya’s story that started in How Microbes Grow and Oxygen Requirements for Microbial Growth.

The presence of Listeria in Nataliya’s blood suggests that her symptoms are due to listeriosis, an infection caused by L. monocytogenes. Listeriosis is a serious infection with a 20% mortality rate and is a particular risk to Nataliya’s fetus. A sample from the amniotic fluid cultured for the presence of Listeria gave negative results. Because the absence of organisms does not rule out the possibility of infection, a molecular test based on the nucleic acid amplification of the 16S ribosomal RNA of Listeria was performed to confirm that no bacteria crossed the placenta. Fortunately, the results from the molecular test were also negative.

Nataliya was admitted to the hospital for treatment and recovery. She received a high dose of two antibiotics intravenously for 2 weeks. The preferred drugs for the treatment of listeriosis are ampicillin or penicillin G with an aminoglycoside antibiotic. Resistance to common antibiotics is still rare in Listeria and antibiotic treatment is usually successful. She was released to home care after a week and fully recovered from her infection.

L. monocytogenes is a gram-positive short rod found in soil, water, and food. It is classified as a psychrophile and is halotolerant. Its ability to multiply at refrigeration temperatures (4–10 °C) and its tolerance for high concentrations of salt (up to 10% sodium chloride [NaCl]) make it a frequent source of food poisoning. Because Listeria can infect animals, it often contaminates food such as meat, fish, or dairy products. Contamination of commercial foods can often be traced to persistent biofilms that form on manufacturing equipment that is not sufficiently cleaned.

Listeria infection is relatively common among pregnant women because the elevated levels of progesterone downregulate the immune system, making them more vulnerable to infection. The pathogen can cross the placenta and infect the fetus, often resulting in miscarriage, stillbirth, or fatal neonatal infection. Pregnant women are thus advised to avoid consumption of soft cheeses, refrigerated cold cuts, smoked seafood, and unpasteurized dairy products. Because Listeria bacteria can easily be confused with diphtheroids, another common group of gram-positive rods, it is important to alert the laboratory when listeriosis is suspected.

The organisms retrieved from arctic lakes such as Lake Whillans are considered extreme psychrophiles (cold loving). Psychrophiles are microorganisms that can grow at 0 °C and below, have an optimum growth temperature close to

15 °C, and usually do not survive at temperatures above 20 °C. They are found in permanently cold environments such as the deep waters of the oceans. Because they are active at low temperature, psychrophiles and psychrotrophs are important decomposers in cold climates. 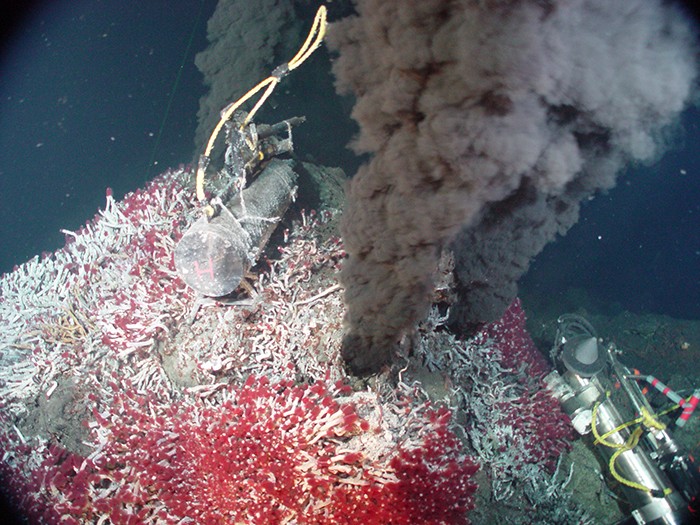 Figure 1. A black smoker at the bottom of the ocean belches hot, chemical-rich water, and heats the surrounding waters. Sea vents provide an extreme environment that is nonetheless teeming with macroscopic life (the red tubeworms) supported by an abundant microbial ecosystem. (credit: NOAA)

Organisms that grow at optimum temperatures of 50 °C to a maximum of 80 °C are called thermophiles (“heat loving”). They do not multiply at room temperature. Thermophiles are widely distributed in hot springs, geothermal soils, and manmade environments such as garden compost piles where the microbes break down kitchen scraps and vegetal material. Examples of thermophiles include Thermus aquaticus and Geobacillus spp. Higher up on the extreme temperature scale we find the hyperthermophiles, which are characterized by growth ranges from 80 °C to a maximum of 110 °C, with some extreme examples that survive temperatures above 121 °C, the average temperature of an autoclave. The hydrothermal vents at the bottom of the ocean are a prime example of extreme environments, with temperatures reaching an estimated 340 °C (Figure 1).

Microbes isolated from the vents achieve optimal growth at temperatures higher than 100 °C. Noteworthy examples are Pyrobolus and Pyrodictium, archaea that grow at 105 °C and survive autoclaving. Figure 2 shows the typical skewed curves of temperature-dependent growth for the categories of microorganisms we have discussed. 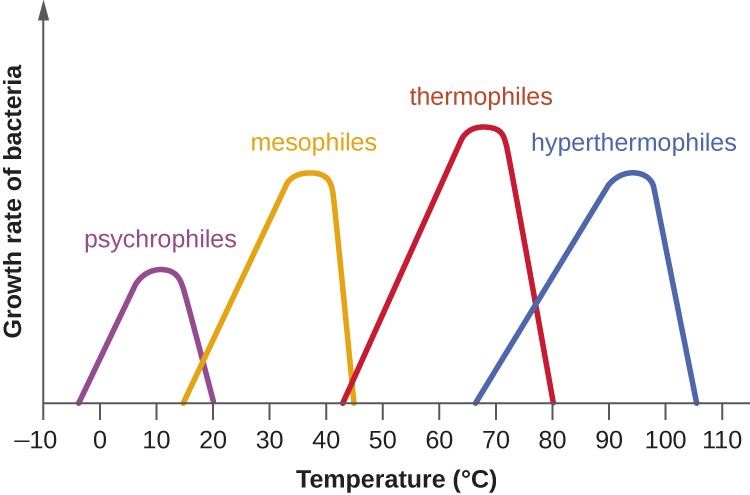 Figure 2. The graph shows growth rate of bacteria as a function of temperature. Notice that the curves are skewed toward the optimum temperature. The skewing of the growth curve is thought to reflect the rapid denaturation of proteins as the temperature rises past the optimum for growth of the microorganism.

Life in extreme environments raises fascinating questions about the adaptation of macromolecules and metabolic processes. Very low temperatures affect cells in many ways. Membranes lose their fluidity and are damaged by ice crystal formation. Chemical reactions and diffusion slow considerably. Proteins become too rigid to catalyze reactions and may undergo denaturation. At the opposite end of the temperature spectrum, heat denatures proteins and nucleic acids. Increased fluidity impairs metabolic processes in membranes. Some of the practical applications of the destructive effects of heat on microbes are sterilization by steam, pasteurization, and incineration of inoculating loops. Proteins in psychrophiles are, in general, rich in hydrophobic residues, display an increase in flexibility, and have a lower number of secondary stabilizing bonds when compared with homologous proteins from mesophiles. Antifreeze proteins and solutes that decrease the freezing temperature of the cytoplasm are common. The lipids in the membranes tend to be unsaturated to increase fluidity. Growth rates are much slower than those encountered at moderate temperatures. Under appropriate conditions, mesophiles and even thermophiles can survive freezing. Liquid cultures of bacteria are mixed with sterile glycerol solutions and frozen to −80 °C for long-term storage as stocks. Cultures can withstand freeze drying (lyophilization) and then be stored as powders in sealed ampules to be reconstituted with broth when needed.

Macromolecules in thermophiles and hyperthermophiles show some notable structural differences from what is observed in the mesophiles. The ratio of saturated to polyunsaturated lipids increases to limit the fluidity of the cell membranes. Their DNA sequences show a higher proportion of guanine–cytosine nitrogenous bases, which are held together by three hydrogen bonds in contrast to adenine and thymine, which are connected in the double helix by two hydrogen bonds. Additional secondary ionic and covalent bonds, as well as the replacement of key amino acids to stabilize folding, contribute to the resistance of proteins to denaturation. The so-called thermoenzymes purified from thermophiles have important practical applications. For example, amplification of nucleic acids in the polymerase chain reaction (PCR) depends on the thermal stability of Taq polymerase, an enzyme isolated from T. aquaticus. Degradation enzymes from thermophiles are added as ingredients in hot-water detergents, increasing their effectiveness.

Feeding the World…and the World’s Algae

Artificial fertilizers have become an important tool in food production around the world. They are responsible for many of the gains of the so-called green revolution of the 20th century, which has allowed the planet to feed many of its more than 7 billion people. Artificial fertilizers provide nitrogen and phosphorus, key limiting nutrients, to crop plants, removing the normal barriers that would otherwise limit the rate of growth. Thus, fertilized crops grow much faster, and farms that use fertilizer produce higher crop yields.

However, careless use and overuse of artificial fertilizers have been demonstrated to have significant negative impacts on aquatic ecosystems, both freshwater and marine. Fertilizers that are applied at inappropriate times or in too-large quantities allow nitrogen and phosphorus compounds to escape use by crop plants and enter drainage systems. Inappropriate use of fertilizers in residential settings can also contribute to nutrient loads, which find their way to lakes and coastal marine ecosystems. As water warms and nutrients are plentiful, microscopic algae bloom, often changing the color of the water because of the high cell density.

Most algal blooms are not directly harmful to humans or wildlife; however, they can cause harm indirectly. As the algal population expands and then dies, it provides a large increase in organic matter to the bacteria that live in deep water. With this large supply of nutrients, the population of nonphotosynthetic microorganisms explodes, consuming available oxygen and creating “dead zones” where animal life has virtually disappeared. 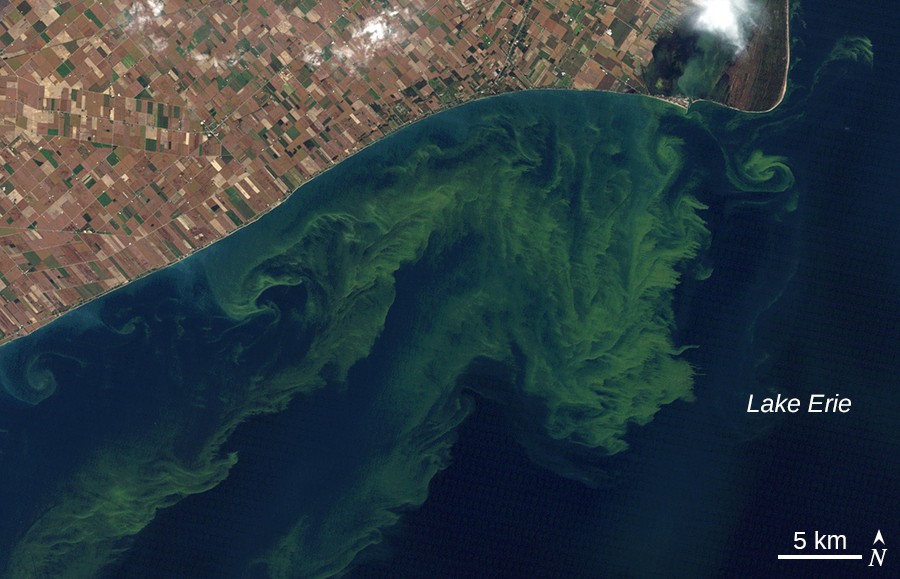 Figure 3. Heavy rains cause runoff of fertilizers into Lake Erie, triggering extensive algal blooms, which can be observed along the shoreline. Notice the brown unplanted and green planted agricultural land on the shore. (credit: NASA)

Depletion of oxygen in the water is not the only damaging consequence of some algal blooms. The algae that produce red tides in the Gulf of Mexico, Karenia brevis, secrete potent toxins that can kill fish and other organisms and also accumulate in shellfish. Consumption of contaminated shellfish can cause severe neurological and gastrointestinal symptoms in humans. Shellfish beds must be regularly monitored for the presence of the toxins, and harvests are often shut down when it is present, incurring economic costs to the fishery. Cyanobacteria, which can form blooms in marine and freshwater ecosystems, produce toxins called microcystins, which can cause allergic reactions and liver damage when ingested in drinking water or during swimming. Recurring cyanobacterial algal blooms in Lake Erie (Figure 3) have forced municipalities to issue drinking water bans for days at a time because of unacceptable toxin levels.

This is just a small sampling of the negative consequences of algal blooms, red tides, and dead zones. Yet the benefits of crop fertilizer—the main cause of such blooms—are difficult to dispute. There is no easy solution to this dilemma, as a ban on fertilizers is not politically or economically feasible. In lieu of this, we must advocate for responsible use and regulation in agricultural and residential contexts, as well as the restoration of wetlands, which can absorb excess fertilizers before they reach lakes and oceans.

A soup container was forgotten in the refrigerator and shows contamination. The contaminants are probably which of the following?

Bacteria isolated from a hot tub at 39 °C are probably which of the following?

In which environment are you most likely to encounter a hyperthermophile?

Show Answer
Answer c. You are most likely to encounter a hyperthermophile in a hydrothermal vent at the bottom of the ocean.

Which of the following environments would harbor psychrophiles?

Show Answer
Answer a. A mountain lake with a water temperature of 12 °C would harbor psychrophiles.

Match the type of bacterium with its environment. Each choice may be used once, more than once, or not at all. Put the appropriate letter beside the environment.

How are hyperthermophile’s proteins adapted to the high temperatures of their environment?

Why would NASA be funding microbiology research in Antarctica?

The bacterium that causes Hansen’s disease (leprosy), Mycobacterium leprae, infects mostly the extremities of the body: hands, feet, and nose. Can you make an educated guess as to its optimum temperature of growth?

Refer to Figure 2. Some hyperthermophiles can survive autoclaving temperatures. Are they a concern in health care?