The Effects of pH on Microbial Growth

Yogurt, pickles, sauerkraut, and lime-seasoned dishes all owe their tangy taste to a high acid content (Figure 1). Recall that acidity is a function of the concentration of hydrogen ions [H+] and is measured as pH. Environments with pH values below 7.0 are considered acidic, whereas those with pH values above 7.0 are considered basic. Extreme pH affects the structure of all macromolecules. The hydrogen bonds holding together strands of DNA break up at high pH. Lipids are hydrolyzed by an extremely basic pH. The proton motive force responsible for production of ATP in cellular respiration depends on the concentration gradient of H+ across the plasma membrane (see Cellular Respiration). If H+ ions are neutralized by hydroxide ions, the concentration gradient collapses and impairs energy production. But the component most sensitive to pH in the cell is its workhorse, the protein. Moderate changes in pH modify the ionization of amino-acid functional groups and disrupt hydrogen bonding, which, in turn, promotes changes in the folding of the molecule, promoting denaturation and destroying activity. 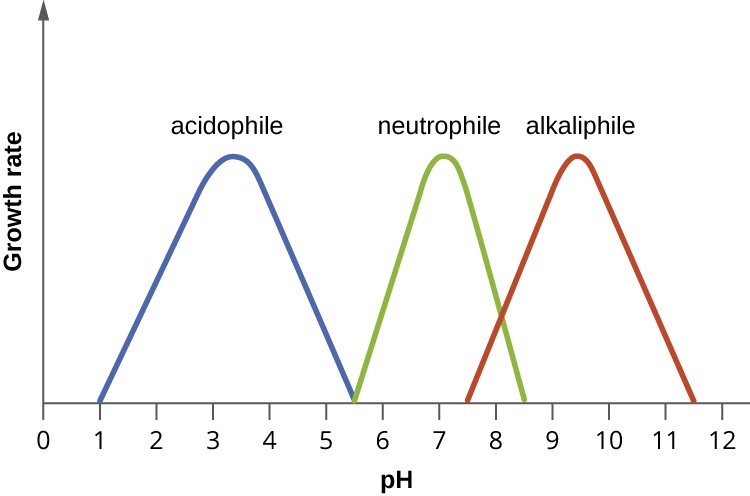 Figure 2. The curves show the approximate pH ranges for the growth of the different classes of pH-specific prokaryotes. Each curve has an optimal pH and extreme pH values at which growth is much reduced. Most bacteria are neutrophiles and grow best at near-neutral pH (center curve). Acidophiles have optimal growth at pH values near 3 and alkaliphiles have optimal growth at pH values above 9.

Most bacteria are neutrophiles, meaning they grow optimally at a pH within one or two pH units of the neutral pH of 7 (see Figure 2). Most familiar bacteria, like Escherichia coli, staphylococci, and Salmonella spp. are neutrophiles and do not fare well in the acidic pH of the stomach. However, there are pathogenic strains of E. coli, S. typhi, and other species of intestinal pathogens that are much more resistant to stomach acid. In comparison, fungi thrive at slightly acidic pH values of 5.0–6.0.

Microorganisms that grow optimally at pH less than 5.55 are called acidophiles. For example, the sulfur-oxidizing Sulfolobus spp. isolated from sulfur mud fields and hot springs in Yellowstone National Park are extreme acidophiles. These archaea survive at pH values of 2.5–3.5. Species of the archaean genus Ferroplasma live in acid mine drainage at pH values of 0–2.9. Lactobacillus bacteria, which are an important part of the normal microbiota of the vagina, can tolerate acidic environments at pH values 3.5–6.8 and also contribute to the acidity of the vagina (pH of 4, except at the onset of menstruation) through their metabolic production of lactic acid. The vagina’s acidity plays an important role in inhibiting other microbes that are less tolerant of acidity. Acidophilic microorganisms display a number of adaptations to survive in strong acidic environments. For example, proteins show increased negative surface charge that stabilizes them at low pH. Pumps actively eject H+ ions out of the cells. The changes in the composition of membrane phospholipids probably reflect the need to maintain membrane fluidity at low pH.

At the other end of the spectrum are alkaliphiles, microorganisms that grow best at pH between 8.0 and 10.5. Vibrio cholerae, the pathogenic agent of cholera, grows best at the slightly basic pH of 8.0; it can survive pH values of 11.0 but is inactivated by the acid of the stomach. When it comes to survival at high pH, the bright pink archaean Natronobacterium, found in the soda lakes of the African Rift Valley, may hold the record at a pH of 10.5 (Figure 3). Extreme alkaliphiles have adapted to their harsh environment through evolutionary modification of lipid and protein structure and compensatory mechanisms to maintain the proton motive force in an alkaline environment. For example, the alkaliphile Bacillus firmus derives the energy for transport reactions and motility from a Na+ ion gradient rather than a proton motive force. Many enzymes from alkaliphiles have a higher isoelectric point, due to an increase in the number of basic amino acids, than homologous enzymes from neutrophiles. 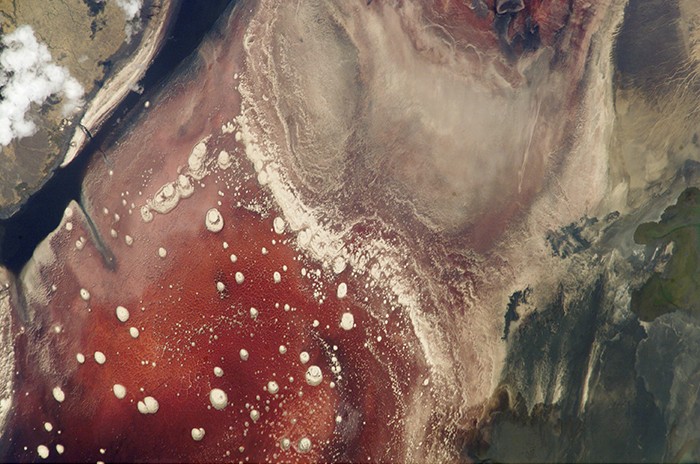 Figure 3. View from space of Lake Natron in Tanzania. The pink color is due to the pigmentation of the extreme alkaliphilic and halophilic microbes that colonize the lake. (credit: NASA)

Survival at the Low pH of the Stomach

Peptic ulcers (or stomach ulcers) are painful sores on the stomach lining. Until the 1980s, they were believed to be caused by spicy foods, stress, or a combination of both. Patients were typically advised to eat bland foods, take anti-acid medications, and avoid stress. These remedies were not particularly effective, and the condition often recurred. This all changed dramatically when the real cause of most peptic ulcers was discovered to be a slim, corkscrew-shaped bacterium, Helicobacter pylori. This organism was identified and isolated by Barry Marshall and Robin Warren, whose discovery earned them the Nobel Prize in Medicine in 2005.

The ability of H. pylori to survive the low pH of the stomach would seem to suggest that it is an extreme acidophile. As it turns out, this is not the case. In fact, H. pylori is a neutrophile. So, how does it survive in the stomach? Remarkably, H. pylori creates a microenvironment in which the pH is nearly neutral. It achieves this by producing large amounts of the enzyme urease, which breaks down urea to form NH4+ and CO2. The ammonium ion raises the pH of the immediate environment.

This metabolic capability of H. pylori is the basis of an accurate, noninvasive test for infection. The patient is given a solution of urea containing radioactively labeled carbon atoms. If H. pylori is present in the stomach, it will rapidly break down the urea, producing radioactive CO2 that can be detected in the patient’s breath. Because peptic ulcers may lead to gastric cancer, patients who are determined to have H. pylori infections are treated with antibiotics.

Bacteria that grow in mine drainage at pH 1–2 are probably which of the following?

Show Answer
Answer b. These bacteria are probably acidophiles.

Bacteria isolated from Lake Natron, where the water pH is close to 10, are which of the following?

Show Answer
Answer a. These bacteria are probably alkaliphiles.

In which environment are you most likely to encounter an acidophile?

Show Answer
Answer b. You are most likely to encounter an acidophile in a hot vent at pH 1.5

Show Answer
A bacterium that thrives in a soda lake where the average pH is 10.5 can be classified as an alkaliphile.

Show Answer
Lactobacillus acidophilus grows best at pH 4.5. It is considered an acidophile.