Accurate identification of bacterial isolates is essential in a clinical microbiology laboratory because the results often inform decisions about treatment that directly affect patient outcomes. For example, cases of food poisoning require accurate identification of the causative agent so that physicians can prescribe appropriate treatment. Likewise, it is important to accurately identify the causative pathogen during an outbreak of disease so that appropriate strategies can be employed to contain the epidemic.

Some microorganisms store certain compounds as granules within their cytoplasm, and the contents of these granules can be used for identification purposes. For example, poly-β-hydroxybutyrate (PHB) is a carbon- and energy-storage compound found in some nonfluorescent bacteria of the genus Pseudomonas. Different species within this genus can be classified by the presence or the absence of PHB and fluorescent pigments. The human pathogen P. aeruginosa and the plant pathogen P. syringae are two examples of fluorescent Pseudomonas species that do not accumulate PHB granules.

Other systems rely on biochemical characteristics to identify microorganisms by their biochemical reactions, such as carbon utilization and other metabolic tests. In small laboratory settings or in teaching laboratories, those assays are carried out using a limited number of test tubes. However, more modern systems, such as the one developed by Biolog, Inc., are based on panels of biochemical reactions performed simultaneously and analyzed by software. Biolog’s system identifies cells based on their ability to metabolize certain biochemicals and on their physiological properties, including pH and chemical sensitivity. It uses all major classes of biochemicals in its analysis. Identifications can be performed manually or with the semi- or fully automated instruments.

Another automated system identifies microorganisms by determining the specimen’s mass spectrum and then comparing it to a database that contains known mass spectra for thousands of microorganisms. This method is based on matrix-assisted laser desorption/ionization time-of-flight mass spectrometry (MALDI-TOF) and uses disposable MALDI plates on which the microorganism is mixed with a specialized matrix reagent (Figure 1). The sample/reagent mixture is irradiated with a high-intensity pulsed ultraviolet laser, resulting in the ejection of gaseous ions generated from the various chemical constituents of the microorganism. These gaseous ions are collected and accelerated through the mass spectrometer, with ions traveling at a velocity determined by their mass-to-charge ratio (m/z), thus, reaching the detector at different times. A plot of detector signal versus m/z yields a mass spectrum for the organism that is uniquely related to its biochemical composition. Comparison of the mass spectrum to a library of reference spectra obtained from identical analyses of known microorganisms permits identification of the unknown microbe.

Microbes can also be identified by measuring their unique lipid profiles. As we have learned, fatty acids of lipids can vary in chain length, presence or absence of double bonds, and number of double bonds, hydroxyl groups, branches, and rings. To identify a microbe by its lipid composition, the fatty acids present in their membranes are analyzed. A common biochemical analysis used for this purpose is a technique used in clinical, public health, and food laboratories. It relies on detecting unique differences in fatty acids and is called fatty acid methyl ester (FAME) analysis. In a FAME analysis, fatty acids are extracted from the membranes of microorganisms, chemically altered to form volatile methyl esters, and analyzed by gas chromatography (GC). The resulting GC chromatogram is compared with reference chromatograms in a database containing data for thousands of bacterial isolates to identify the unknown microorganism (Figure 2).

Figure 2. Fatty acid methyl ester (FAME) analysis in bacterial identification results in a chromatogram unique to each bacterium. Each peak in the gas chromatogram corresponds to a particular fatty acid methyl ester and its height is proportional to the amount present in the cell. (credit “culture”: modification of work by the Centers for Disease Control and Prevention; credit “graph”: modification of work by Zhang P. and Liu P.)

A related method for microorganism identification is called phospholipid-derived fatty acids (PLFA) analysis. Membranes are mostly composed of phospholipids, which can be saponified (hydrolyzed with alkali) to release the fatty acids. The resulting fatty acid mixture is then subjected to FAME analysis, and the measured lipid profiles can be compared with those of known microorganisms to identify the unknown microorganism.

Bacterial identification can also be based on the proteins produced under specific growth conditions within the human body. These types of identification procedures are called proteomic analysis. To perform proteomic analysis, proteins from the pathogen are first separated by high-pressure liquid chromatography (HPLC), and the collected fractions are then digested to yield smaller peptide fragments. These peptides are identified by mass spectrometry and compared with those of known microorganisms to identify the unknown microorganism in the original specimen.

Microorganisms can also be identified by the carbohydrates attached to proteins (glycoproteins) in the plasma membrane or cell wall. Antibodies and other carbohydrate-binding proteins can attach to specific carbohydrates on cell surfaces, causing the cells to clump together. Serological tests (e.g., the Lancefield groups tests, which are used for identification of Streptococcus species) are performed to detect the unique carbohydrates located on the surface of the cell.

This example concludes Cristina’s story that started in Organic Molecules and Lipids. 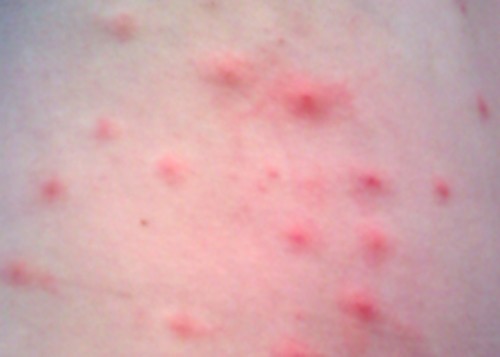 Figure 3. Exposure to Pseudomonas aeruginosa in the water of a pool or hot tub can sometimes cause a skin infection that manifests as “hot tub rash.” (credit: modification of work by “Lsupellmel”/Wikimedia Commons)

Cristina stopped using her new sunscreen and applied the corticosteroid cream to her rash as directed. However, after several days, her rash had not improved and actually seemed to be getting worse. She made a follow-up appointment with her doctor, who observed a bumpy red rash and pus-filled blisters around hair follicles (Figure 3). The rash was especially concentrated in areas that would have been covered by a swimsuit. After some questioning, Cristina told the physician that she had recently attended a pool party and spent some time in a hot tub. In light of this new information, the doctor suspected a case of hot tub rash, an infection frequently caused by the bacterium Pseudomonas aeruginosa, an opportunistic pathogen that can thrive in hot tubs and swimming pools, especially when the water is not sufficiently chlorinated. P. aeruginosa is the same bacterium that is associated with infections in the lungs of patients with cystic fibrosis.

The doctor collected a specimen from Cristina’s rash to be sent to the clinical microbiology lab. Confirmatory tests were carried out to distinguish P. aeruginosa from enteric pathogens that can also be present in pool and hot-tub water. The test included the production of the blue-green pigment pyocyanin on cetrimide agar and growth at 42 °C. Cetrimide is a selective agent that inhibits the growth of other species of microbial flora and also enhances the production of P. aeruginosa pigments pyocyanin and fluorescein, which are a characteristic blue-green and yellow-green, respectively.

Tests confirmed the presence of P. aeruginosa in Cristina’s skin sample, but the doctor decided not to prescribe an antibiotic. Even though P. aeruginosa is a bacterium, Pseudomonas species are generally resistant to many antibiotics. Luckily, skin infections like Cristina’s are usually self-limiting; the rash typically lasts about 2 weeks and resolves on its own, with or without medical treatment. The doctor advised Cristina to wait it out and keep using the corticosteroid cream. The cream will not kill the P. aeruginosa on Cristina’s skin, but it should calm her rash and minimize the itching by suppressing her body’s inflammatory response to the bacteria.

Which of the following characteristics/compounds is not considered to be a phenotypic biochemical characteristic used of microbial identification?

Show Answer
Answer b. The small-subunit (16S) rRNA gene  is not considered to be a phenotypic biochemical characteristic used of microbial identification.

Proteomic analysis is a methodology that deals with which of the following?

Show Answer
Answer d. Proteomic analysis is a methodology that deals with the study of all accumulated proteins of an organism.

Which method involves the generation of gas phase ions from intact microorganisms?

Which method involves the analysis of membrane-bound carbohydrates?

Which method involves conversion of a microbe’s lipids to volatile compounds for analysis by gas chromatography?

Show Answer
Answer a. The FAME method involves conversion of a microbe’s lipids to volatile compounds for analysis by gas chromatography.

MALDI-TOF relies on obtaining a unique mass spectrum for the bacteria tested and then checking the acquired mass spectrum against the spectrum databases registered in the analysis software to identify the microorganism.

Compare MALDI-TOF, FAME, and PLFA, and explain how each technique would be used to identify pathogens.