Psychological researchers study genetics in order to better understand the biological basis that contributes to certain behaviors. While all humans share certain biological mechanisms, we are each unique. And while our bodies have many of the same parts—brains and hormones and cells with genetic codes—these are expressed in a wide variety of behaviors, thoughts, and reactions.

Why do two people infected by the same disease have different outcomes: one surviving and one succumbing to the ailment? How are genetic diseases passed through family lines? Are there genetic components to psychological disorders, such as depression or schizophrenia? To what extent might there be a psychological basis to health conditions such as childhood obesity?

To explore these questions, let’s start by focusing on a specific disease, sickle-cell anemia, and how it might affect two infected sisters. Sickle-cell anemia is a genetic condition in which red blood cells, which are normally round, take on a crescent-like shape (Figure 1). The changed shape of these cells affects how they function: sickle-shaped cells can clog blood vessels and block blood flow, leading to high fever, severe pain, swelling, and tissue damage.

Many people with sickle-cell anemia—and the particular genetic mutation that causes it—die at an early age. While the notion of “survival of the fittest” may suggest that people suffering from this disease have a low survival rate and therefore the disease will become less common, this is not the case. Despite the negative evolutionary effects associated with this genetic mutation, the sickle-cell gene remains relatively common among people of African descent. Why is this? The explanation is illustrated with the following scenario.

Imagine two young women—Luwi and Sena—sisters in rural Zambia, Africa. Luwi carries the gene for sickle-cell anemia; Sena does not carry the gene. Sickle-cell carriers have one copy of the sickle-cell gene but do not have full-blown sickle-cell anemia. They experience symptoms only if they are severely dehydrated or are deprived of oxygen (as in mountain climbing). Carriers are thought to be immune from malaria (an often deadly disease that is widespread in tropical climates) because changes in their blood chemistry and immune functioning prevent the malaria parasite from having its effects (Gong, Parikh, Rosenthal, & Greenhouse, 2013). However, full-blown sickle-cell anemia, with two copies of the sickle-cell gene, does not provide immunity to malaria.

Visit this website to learn more about how a mutation in DNA leads to sickle-cell anemia.

Malaria is rare in the United States, so the sickle-cell gene benefits nobody: the gene manifests primarily in health problems—minor in carriers, severe in the full-blown disease—with no health benefits for carriers. However, the situation is quite different in other parts of the world. In parts of Africa where malaria is prevalent, having the sickle-cell mutation does provide health benefits for carriers (protection from malaria).

This is precisely the situation that Charles Darwin describes in the theory of evolution by natural selection (Figure 2). In simple terms, the theory states that organisms that are better suited for their environment will survive and reproduce, while those that are poorly suited for their environment will die off. In our example, we can see that as a carrier, Luwi’s mutation is highly adaptive in her African homeland; however, if she resided in the United States (where malaria is much less common), her mutation could prove costly—with a high probability of the disease in her descendants and minor health problems of her own.

It’s easy to get confused about two fields that study the interaction of genes and the environment, such as the fields of evolutionary psychology and behavioral genetics. How can we tell them apart?

In both fields, it is understood that genes not only code for particular traits, but also contribute to certain patterns of cognition and behavior. Evolutionary psychology focuses on how universal patterns of behavior and cognitive processes have evolved over time. Therefore, variations in cognition and behavior would make individuals more or less successful in reproducing and passing those genes to their offspring. Evolutionary psychologists study a variety of psychological phenomena that may have evolved as adaptations, including fear response, food preferences, mate selection, and cooperative behaviors (Confer et al., 2010).

Whereas evolutionary psychologists focus on universal patterns that evolved over millions of years, behavioral geneticists study how individual differences arise, in the present, through the interaction of genes and the environment. When studying human behavior, behavioral geneticists often employ twin and adoption studies to research questions of interest. Twin studies compare the rates that a given behavioral trait is shared among identical and fraternal twins; adoption studies compare those rates among biologically related relatives and adopted relatives. Both approaches provide some insight into the relative importance of genes and environment for the expression of a given trait.

Watch this interview with renowned evolutionary psychologist Davis Buss for an explanation of how a psychologist approaches evolution and how this approach fits within the field of social science.

Genetic variation, the genetic difference between individuals, is what contributes to a species’ adaptation to its environment. In humans, genetic variation begins with an egg, about 100 million sperm, and fertilization. Fertile women ovulate roughly once per month, releasing an egg from follicles in the ovary. The egg travels, via the fallopian tube, from the ovary to the uterus, where it may be fertilized by a sperm.

The egg and the sperm each contain 23 chromosomes. Chromosomes are long strings of genetic material known as deoxyribonucleic acid (DNA). DNA is a helix-shaped molecule made up of nucleotide base pairs. In each chromosome, sequences of DNA make up genes that control or partially control a number of visible characteristics, known as traits, such as eye color, hair color, and so on. A single gene may have multiple possible variations, or alleles. An allele is a specific version of a gene. So, a given gene may code for the trait of hair color, and the different alleles of that gene affect which hair color an individual has.

When a sperm and egg fuse, their 23 chromosomes pair up and create a zygote with 23 pairs of chromosomes. Therefore, each parent contributes half the genetic information carried by the offspring; the resulting physical characteristics of the offspring (called the phenotype) are determined by the interaction of genetic material supplied by the parents (called the genotype). A person’s genotype is the genetic makeup of that individual. Phenotype, on the other hand, refers to the individual’s inherited physical characteristics (Figure 3).

Figure 3. (a) Genotype refers to the genetic makeup of an individual based on the genetic material (DNA) inherited from one’s parents. (b) Phenotype describes an individual’s observable characteristics, such as hair color, skin color, height, and build. (credit a: modification of work by Caroline Davis; credit b: modification of work by Cory Zanker)

Most traits are controlled by multiple genes, but some traits are controlled by one gene. A characteristic like cleft chin, for example, is influenced by a single gene from each parent. In this example, we will call the gene for cleft chin “B,” and the gene for smooth chin “b.” Cleft chin is a dominant trait, which means that having the dominant allele either from one parent (Bb) or both parents (BB) will always result in the phenotype associated with the dominant allele. When someone has two copies of the same allele, they are said to be homozygous for that allele. When someone has a combination of alleles for a given gene, they are said to be heterozygous. For example, smooth chin is a recessive trait, which means that an individual will only display the smooth chin phenotype if they are homozygous for that recessive allele (bb).

Sickle-cell anemia is just one of many genetic disorders caused by the pairing of two recessive genes. For example, phenylketonuria (PKU) is a condition in which individuals lack an enzyme that normally converts harmful amino acids into harmless byproducts. If someone with this condition goes untreated, he or she will experience significant deficits in cognitive function, seizures, and increased risk of various psychiatric disorders. Because PKU is a recessive trait, each parent must have at least one copy of the recessive allele in order to produce a child with the condition (Figure 5).

So far, we have discussed traits that involve just one gene, but few human characteristics are controlled by a single gene. Most traits are polygenic: controlled by more than one gene. Height is one example of a polygenic trait, as are skin color and weight. 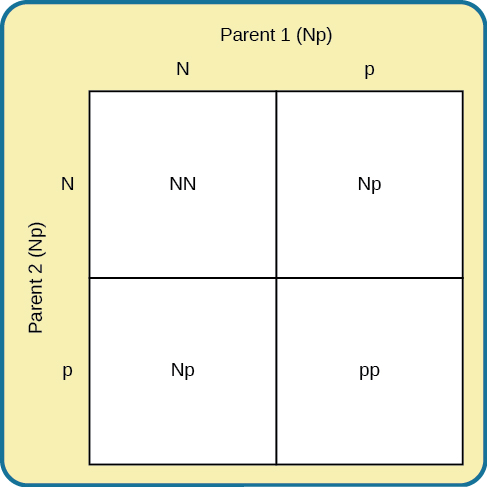 Where do harmful genes that contribute to diseases like PKU come from? Gene mutations provide one source of harmful genes. A mutation is a sudden, permanent change in a gene. While many mutations can be harmful or lethal, once in a while, a mutation benefits an individual by giving that person an advantage over those who do not have the mutation. Recall that the theory of evolution asserts that individuals best adapted to their particular environments are more likely to reproduce and pass on their genes to future generations. In order for this process to occur, there must be competition—more technically, there must be variability in genes (and resultant traits) that allow for variation in adaptability to the environment. If a population consisted of identical individuals, then any dramatic changes in the environment would affect everyone in the same way, and there would be no variation in selection. In contrast, diversity in genes and associated traits allows some individuals to perform slightly better than others when faced with environmental change. This creates a distinct advantage for individuals best suited for their environments in terms of successful reproduction and genetic transmission.

allele: specific version of a gene
chromosome: long strand of genetic information
deoxyribonucleic acid (DNA): helix-shaped molecule made of nucleotide base pairs
dominant allele: allele whose phenotype will be expressed in an individual that possesses that allele
genetic environmental correlation: view of gene-environment interaction that asserts our genes affect our environment, and our environment influences the expression of our genes
genotype: genetic makeup of an individual
heterozygous: consisting of two different alleles
homozygous: consisting of two identical alleles
mutation: sudden, permanent change in a gene
phenotype: individual’s inheritable physical characteristics
polygenic: multiple genes affecting a given trait
recessive allele: allele whose phenotype will be expressed only if an individual is homozygous for that allele
theory of evolution by natural selection: states that organisms that are better suited for their environments will survive and reproduce compared to those that are poorly suited for their environments
Licenses and Attributions
CC licensed content, Shared previously