Please read this page on our first art song: “Der Erlkonig.” This piece is one of the best-known lieder of the Romantic era and certainly one of Schubert’s most famous compositions. It is through-composed in form and the dramatic text is heightened by the fact that singers generally give the four characters featured in the poem slightly different tone qualities; a bit like an actor playing multiple parts. As the music is so expressive of the poem’s text, I’d encourage you to listen to the piece on the playlist as soon as you’ve read the article. 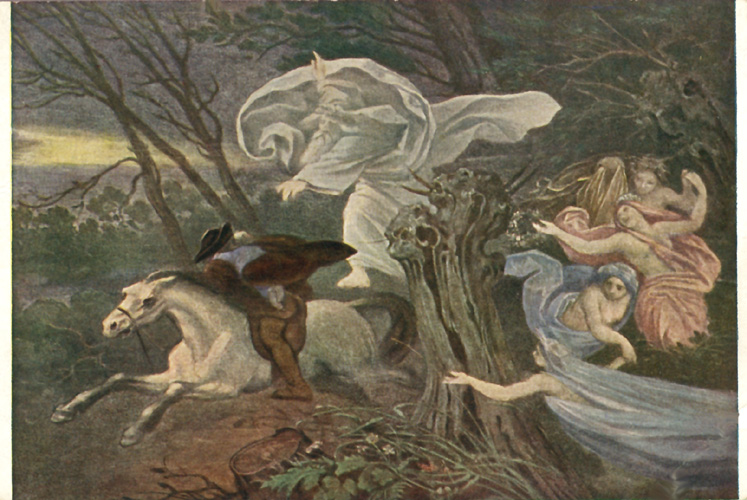 “Erlkönig” (also called “Der Erlkönig“) is a poem by Johann Wolfgang von Goethe. It depicts the death of a child assailed by a supernatural being, the Erlking or “Erlkönig” (suggesting the literal translation “alder king,” but see below). It was originally composed by Goethe as part of a 1782 Singspiel entitled Die Fischerin.

As the poem unfolds, the son seems to see and hear beings his father does not; the reader cannot know if the father is indeed aware of the presence, but he chooses to comfort his son, asserting reassuringly naturalistic explanations for what the child see—a wisp of fog, rustling leaves, shimmering willows. Finally the child shrieks that he has been attacked. The father makes faster for the Hof. There he recognizes that the boy is dead.

The story of the Erlkönig derives from the traditional Danish ballad Elveskud: Goethe’s poem was inspired by Johann Gottfried Herder’s translation of a variant of the ballad (Danmarks gamle Folkeviser 47B, from Peter Syv’s 1695 edition) into German as “Erlkönigs Tochter” (“The Erl-king’s Daughter”) in his collection of folk songs, Stimmen der Völker in Liedern(published 1778). Goethe’s poem then took on a life of its own, inspiring the Romantic concept of the Erlking. Niels Gade’s cantata Elverskud opus 30 (1854, text by Chr. K. F. Molbech) was published in translation as Erlkönigs Tochter.

The poem has often been set to music with Franz Schubert’s rendition, his Opus 1 (D. 328), being the best known. Other notable settings are by members of Goethe’s circle, including the actress Corona Schröter (1782), Andreas Romberg (1793), Johann Friedrich Reichardt (1794) and Carl Friedrich Zelter (1797). Beethoven attempted to set it to music but abandoned the effort; his sketch however was complete enough to be published in a completion by Reinhold Becker (1897). A few other nineteenth-century versions are those byVáclav Tomášek (1815), Carl Loewe (1818) and Ludwig Spohr (1856, with obbligato violin) and Heinrich Wilhelm Ernst (Polyphonic Studies for Solo Violin). 21st century examples are pianist Marc-André Hamelin’s “Etude No. 8 (after Goethe)” for solo piano, based on “Erlkönig.” and German rock singer Achim Reichel on his album Wilder Wassermann (2002).

Franz Schubert composed his Lied, “Der Erlkönig,” for solo voice and piano in 1815, setting text from Goethe’s poem. Schubert revised the song three times before publishing his fourth version in 1821 as his Opus 1; it was cataloged by Otto Erich Deutsch as D. 328 in his 1951 catalog of Schubert’s works. The song was first performed in concert on 1 December 1820 at a private gathering in Vienna and received its public premiere on 7 March 1821 at Vienna’s Theater am Kärntnertor.

The four characters in the song—narrator, father, son, and the Erlking—are usually all sung by a single vocalist; occasionally, however, the work is performed by four individual vocalists (or three, with one taking the parts of both the narrator and the Erlking). Schubert placed each character largely in a different vocal range, and each has his own rhythmic nuances; in addition, most singers endeavor to use a different vocal coloration for each part. The piece modulates frequently, although each character change between minor or major mode depending how each character intends to interact with the other characters.

“Der Erlkönig” starts with the piano rapidly playing triplets to create a sense of urgency and simulate the horse’s galloping. The left hand of the piano part introduces a low-register leitmotif composed of successive triplets. The right hand consists triplets throughout the whole piece, up until the last three bars. The constant triplets drives forward the frequent modulations of the peace as it switches between the characters. This leitmotif, dark and ominous, is directly associated with the Erlkönig and recurs throughout the piece. These motifs continue throughout. As the piece continues, each of the son’s pleas become louder and higher in pitch than the last. Near the end of the piece the music quickens and then slows as the father spurs his horse to go faster and then arrives at his destination. The absence of the piano creates multiple effects on the text and music. The silence draws attention to the dramatic text and amplifies the immense loss and sorrow caused by the son’s death. This silence from the piano also delivers shock experienced by the father upon the realization that he had just lost his son to the elf king, despite desperately fighting to save the son from the elf king’s grasps. The piece is regarded as extremely challenging to perform due to the multiple characters the vocalist is required to portray, as well as its difficult accompaniment, involving rapidly repeated chords and octaves which contribute to the drama and urgency of the piece.

Der Erlkönig is a through-composed piece, meaning that with each line of text there is new music. Although the melodic motives recur, the harmonic structure is constantly changing and the piece modulates within characters. The elf king remains mainly in major mode due to the fact that he is trying to seduce the son into giving up on life. Using a major mode creates an effect where the elf king is able to portray a warm and inviting aura in order to convince the son that the afterlife promises great pleasures and fortunes.The son always starts singing in the minor mode and usually stays in it for his whole line. This is used to represent his fear of the elf king. Every time he sings the famous line “Mein Vater” he sings it one step higher in each verse, starting first at a D and going up to an F on his final line. This indicates his urgency in trying to get his father to believe him as the elf king gets closer. For most of the Father’s lines, they begin in minor and end in major as he tries to reassure his son by providing rational explanations to his son’s “hallucinations” and dismissing the Elf-king. The constant in major and minor for the father may also represent the constant struggle and loss of control as he tries to save his son from the elf king’s persuasion.

The rhythm of the piano accompaniment also changes within the characters. The first time the Elf-king sings in measure 57, the galloping motive disappears. However, when the Elf-king sings again in measure 87, the piano accompaniment is arpeggiating rather than playing chords. The disappearance of the galloping motive is also symbolic of the son’s hallucinatory state.

Der Erlkönig has been transcribed for various settings: for solo piano by Franz Liszt; for solo voice and orchestra by Hector Berlioz; for solo violin by Heinrich Wilhelm Ernst.

Loewe’s version is less melodic than Schubert’s, with an insistent, repetitive harmonic structure between the opening minor key, and answering phrases in the major key of the dominant, which have a stark quality owing to their unusual relationship to the home key. The narrator’s phrases are echoed by the voices of father and son, the father taking up the deeper, rising phrase, and the son a lightly undulating, answering theme around the dominant fifth. These two themes also evoke the rising and moaning of the wind. The Elf king, who is always heard pianissimo, does not sing melodies, but instead delivers insubstantial rising arpeggios that outline a single major chord (that of the home key) which sounds simultaneously on the piano in una corda tremolo. Only with his final threatening word, “Gewalt,” does he depart from this chord. Loewe’s implication is that the Erlking has no substance, but merely exists in the child’s fevered imagination. As the piece progresses, the first in the groups of three quavers are dotted to create a breathless pace, which then forms a bass figure in the piano driving through to the final crisis. The last words, war tot, leap from the lower dominant to the sharpened third of the home key, this time not to the major but to a diminished chord, which settles chromatically through the home key in the major and then to the minor.