Before we dive into this nocturne, let’s get a little background on the genre itself. Here is a quote from the Wikipedia article on the musical genre Nocturne:

In its more familiar form as a single-movement character piece usually written for solo piano, the nocturne was cultivated primarily in the 19th century. The first nocturnes to be written under the specific title were by the Irish composer John Field, generally viewed as the father of the Romantic nocturne that characteristically features a cantabile (songlike) melody over an arpeggiated, even guitar-like accompaniment. However, the most famous exponent of the form was Frédéric Chopin, who wrote 21 of them.

Nocturnes, as the name suggests, generally exhibit a brooding or melancholy mood. There is relatively little to read on this page, and the first of the two paragraphs is more informative for our purposes as it focuses on musical elements such as tempo and form rather than on critical opinion. However, I think there is value in reading both paragraphs as the descriptive language provided by the cited critics may provide associations that will help you with identification.

The Nocturne in C-sharp minor is initially marked larghetto and is in 4/4 meter. It transitions to più mosso (more movement) in measure 29. The piece returns to its original tempo in measure 84, and ends in an adagio beginning in measure 99. The piece is 101 measures long and written in ternary form with coda; the primary theme is introduced, followed by a secondary theme and a repetition of the first.

The opening alternates between major and minor and uses arpeggios, commonly found in other nocturnes as well, in the left-hand. It sounds “morbid and intentionally grating.” James Friskin noted that the piece requires an “unusually wide extension of the left hand” in the beginning and called the piece “fine and tragic.” James Huneker commented that the piece is “a masterpiece,” pointing to the “morbid, persistent melody” of the left hand. For David Dubal, the più mosso has a “restless, vehement power.” Huneker also likens the più mosso to a work by Beethoven due to the agitated nature of this section. The coda “reminds the listener of Chopin’s seemingly inexhaustible prodigality” according to Dubal while Huneker calls it a “surprising climax followed by sunshine” before returning to the opening theme.

Please listen to the following audio file to listen to Nocturne No. 7 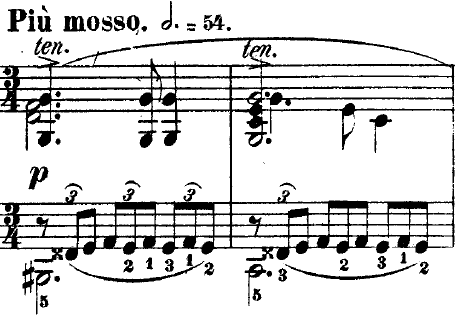 The second theme of No. 1 in C♯ minor