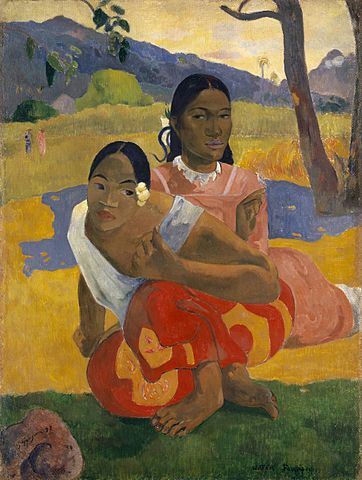 Like so many other movements of the early 20th century, primitivism had its origins in the visual arts. Painters like Paul Gauguin and Pablo Picasso became disillusioned with Western art traditions and sought inspiration in the works of indigenous cultures, untrained painters, and children’s art. They depicted their subjects using non-traditional perspectives. As composers tried to explore this same sense of non-Western perspective through music, they often emphasized the musical element of rhythm in their effort to express an ancient or aboriginal attitude. Unlike other musical movements in the early 1900s, such as impressionism, we cannot point to a large body of significant works in this style that remain in the concert repertoire. However, primitivism did give rise to one of the greatest works of the early twentieth century, Stravinsky’s Rite of Spring. The subject of this ballet is an imagined pagan, sacrificial rite in ancient Russia. It features jarring, repetitive rhythms and extensive use of percussion to evoke an older, less civilized time. So even though the vast majority of Stravinsky’s output does not fall into the category of primitivism, the importance of Rite of Spring is such that the movement bears some examination. To be clear, in the visual arts primitivism had many important adherents who produced a large number of major works. In music, on the other hand, when we speak of primitivism it is almost always in connection to Rite of Spring.