Before we dive into a more detailed exploration of musical concepts and composers, I want us to take a closer look at the advent of the printing press. I don’t think it’s possible to overstate the significance of the printing press on history in general—and music in particular. While this reading focuses primarily on the printing of books, the same process was applied to music. With the rise of the press composers had a new opportunity for income and amateur musicians, many among the rising middle class, provided a new market for their music.

Musicians prior to the advent of the printing press were entirely dependent on either the church or ruling nobles for a living. The printing press didn’t change that system of patronage overnight, but it did provide additional opportunities and freedom for composers. The printing press, by virtue of the volume of copies of musical scores, also greatly enhanced the preservation of the music of this and later periods. As you read about the effect of the printing press on the structure of society, take a moment to reflect on the fact that you are living in a time when a similar leap forward in the distribution of information is happening. 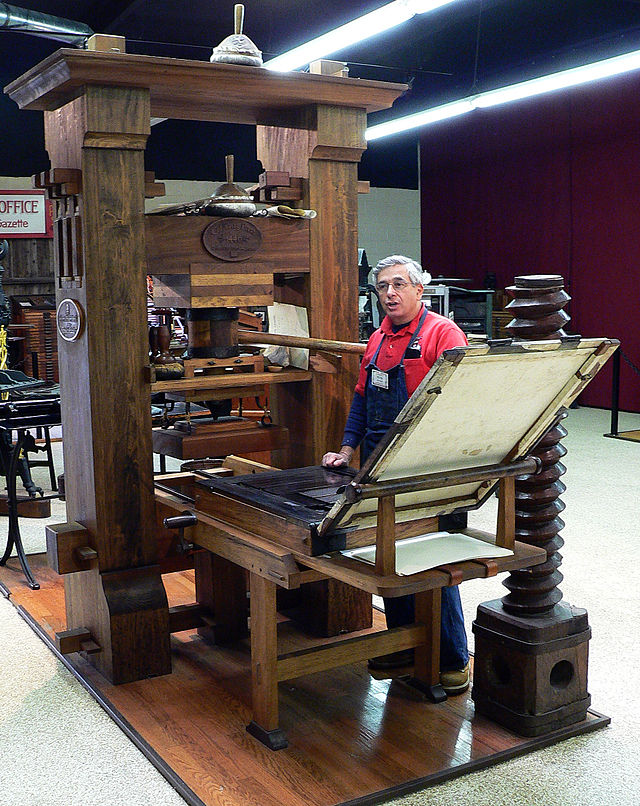 A printing press is a device for applying pressure to an inked surface resting upon a printmedium (such as paper or cloth), thereby transferring the ink. Typically used for texts, the invention of the printing press is widely regarded as one of the most influential events in the second millennium, ushering in the period of modernity.

The printing press was invented in the Holy Roman Empire by Johannes Gutenberg, around 1440. Gutenberg, a goldsmith by profession, devised a hand mould to create metal movable type, and adapted screw presses and other existing technologies, to create a printing system. The mechanization of bookmaking led to the first mass production of books in Europe. A single Renaissance printing press could produce 3,600 pages per workday, compared to about 2,000 by typographic block-printing prevalent in East Asia, and a few by hand-copying. Books of bestselling authors like Luther or Erasmus were sold by the hundreds of thousands in their lifetime.

Within several decades, the printing press spread to over two hundred cities in a dozen European countries. By 1500, printing presses in operation throughout Western Europe had produced more than twenty million volumes. In the 16th century, with presses spreading further afield, their output rose to an estimated 150 to 200 million copies. The operation of a printing press became synonymous with the enterprise of printing, and lent its name to a new branch of media, the press. In 1620, the English philosopherFrancis Bacon wrote of printing as one of three inventions that had changed the world.

In the 19th century, the replacement of the hand-operated Gutenberg-style press by steam-powered rotary presses allowed printing on an industrial scale, while Western-style printing was adopted all over the world, becoming practically the sole medium for modern bulk printing, today typically using offset printing techniques.