Chamber music, which is a broad category of music not a specific genre, is not unique to the Classical era.  We certainly encountered chamber music in our study of the Baroque.

Haydn, Mozart, and the Classical Style

Joseph Haydn is generally credited with creating the modern form of chamber music as we know it. In 83 string quartets, 45 piano trios, and numerous string trios, duos and wind ensembles, Haydn established the conversational style of composition and the overall form that was to dominate the world of chamber music for the next two centuries.

An example of the conversational mode of composition is Haydn’s string quartet Op. 20, No. 4 in D major. In the first movement, after a statement of the main theme by all the instruments, the first violin breaks into a triplet figure, supported by the second violin, viola and cello. The cello answers with its own triplet figure, then the viola, while the other instruments play a secondary theme against this movement. Unlike counterpoint, where each part plays essentially the same melodic role as the others, here each instrument contributes its own character, its own comment on the music as it develops.

Haydn also settled on an overall form for his chamber music compositions, which would become the standard, with slight variations, to the present day. The characteristic Haydn string quartet has four movements:

His innovations earned Haydn the title “father of the string quartet,” and he was recognized by his contemporaries as the leading composer of his time. But he was by no means the only composer developing new modes of chamber music. Even before Haydn, many composers were already experimenting with new forms. Giovanni Battista Sammartini, Ignaz Holzbauer, and Franz Xaver Richter wrote precursors of the string quartet. 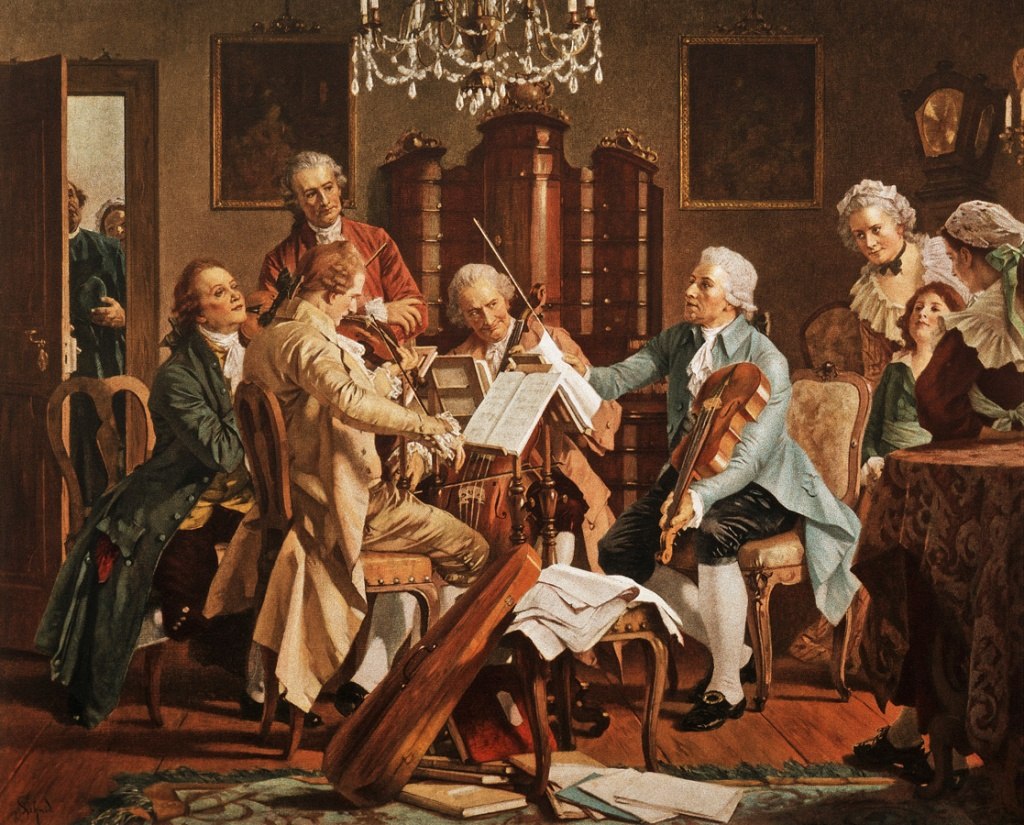 Mozart introduced the newly invented clarinet into the chamber music arsenal, with the Kegelstatt Trio for viola, clarinet and piano, K. 498, and the Quintet for Clarinet and String Quartet, K. 581. He also tried other innovative ensembles, including the quintet for violin, two violas, cello, and horn, K. 407, quartets for flute and strings, and various wind instrument combinations. He wrote six string quintets for two violins, two violas and cello, which explore the rich tenor tones of the violas, adding a new dimension to the string quartet conversation.

Mozart’s string quartets are considered the pinnacle of the classical art. The six string quartets that he dedicated to Haydn, his friend and mentor, inspired the elder composer to say to Mozart’s father, “I tell you before God as an honest man that your son is the greatest composer known to me either in person or by reputation. He has taste, and, what is more, the most profound knowledge of composition.”

Many other composers wrote chamber compositions during this period that were popular at the time and are still played today.Luigi Boccherini, Spanish composer and cellist, wrote nearly a hundred string quartets, and more than one hundred quintets for two violins, viola and two cellos. In this innovative ensemble, later used by Schubert, Boccherini gives flashy, virtuosic solos to the principal cello, as a showcase for his own playing. Violinist Carl Ditters von Dittersdorf and cellist Johann Baptist Wanhal, who both played pickup quartets with Haydn on second violin and Mozart on viola, were popular chamber music composers of the period.

From Home to Hall

The turn of the 19th century saw dramatic changes in society and in music technology which had far-reaching effects on the way chamber music was composed and played.

Collapse of the Aristocratic System

Throughout the 18th century, the composer was normally an employee of an aristocrat, and the chamber music he composed was for the pleasure of and the performance by aristocratic amateurs. Haydn, for example, was an employee of Nikolaus I, Prince Esterházy, a music lover and amateur baryton player, for whom Haydn wrote many of his string trios. Mozart wrote three string quartets for the King of Prussia, Frederick William II, a cellist. Many of Beethoven’s quartets were first performed with patron Count Andrey Razumovsky on second violin. Boccherini composed for the king of Spain.

With the bankruptcy of the aristocracy and new social orders throughout Europe, composers increasingly had to make their own ways by selling and performing compositions. They often gave subscription concerts, renting a hall and collecting the receipts from the performance. Increasingly, they wrote chamber music not only for rich amateurs to perform, but for professional musicians playing to a paying audience.

Changes in the Structure of Stringed Instruments 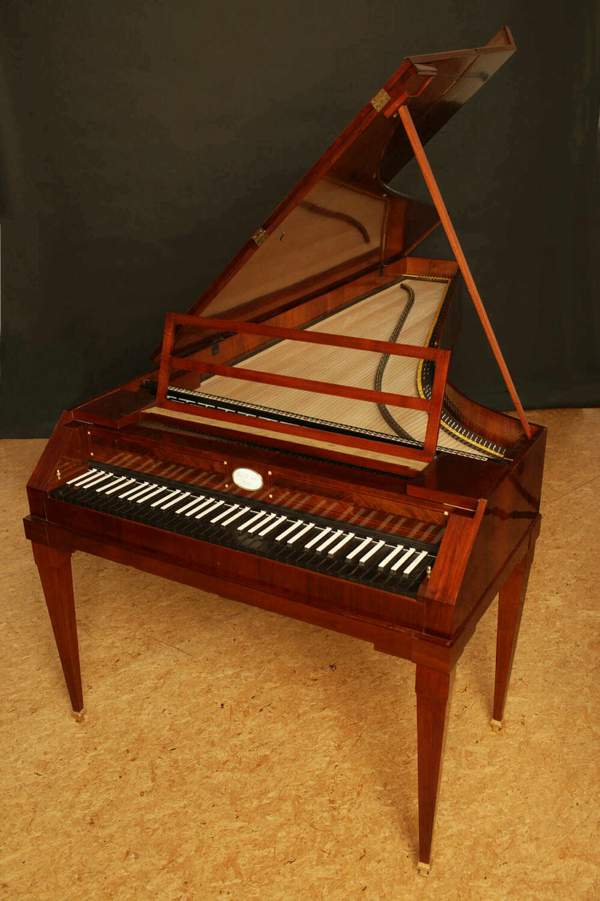 At the beginning of the 19th century, luthiers developed new methods of constructing the violin, viola and cello that gave these instruments a richer tone, more volume, and more carrying power. Also at this time, bowmakers made the violin bow longer, with a thicker ribbon of hair under higher tension. This improved projection, and also made possible new bowing techniques. In 1820, Louis Spohr invented the chinrest, which gave violinists more freedom of movement in their left hands, for a more nimble technique. These changes contributed to the effectiveness of public performances in large halls, and expanded the repertoire of techniques available to chamber music composers.

Invention of the Pianoforte

The pianoforte was invented by Bartolomeo Cristofori at the beginning of the 18th century, but not until the end of that century, with technical improvements in its construction, did it become an effective instrument for performance. The improved pianoforte was immediately adopted by Mozart and other composers, who began composing chamber ensembles with the piano playing a leading role. The piano was to become more and more dominant through the 19th century, so much so that many composers, such as Franz Liszt and Frédéric Chopin, wrote almost exclusively for solo piano.