La bohème is an opera in four acts, composed by Giacomo Puccini to an Italian libretto by Luigi Illica and Giuseppe Giacosa, based on Scènes de la vie de bohème by Henri Murger. The world premiere performance of La bohème was in Turin on 1 February 1896 at the Teatro Regio, conducted by the young Arturo Toscanini. Since then, La bohème has become part of the standard Italian opera repertory and is one of the most frequently performed operas worldwide.

In 1946, fifty years after the opera’s premiere, Toscanini conducted a performance of it on radio with the NBC Symphony Orchestra. This performance was eventually released on records and on CD. It is the only recording of a Puccini opera by its original conductor (see Recordings below).

In the four bohemians’ garret 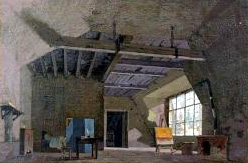 Marcello is painting while Rodolfo gazes out of the window. They complain of the cold. In order to keep warm, they burn the manuscript of Rodolfo’s drama. Colline, the philosopher, enters shivering and disgruntled at not having been able to pawn some books. Schaunard, the musician of the group, arrives with food, wine and cigars. He explains the source of his riches: a job with an eccentric English gentleman, who ordered him to play his violin to a parrot until it died. The others hardly listen to his tale as they set up the table to eat and drink. Schaunard interrupts, telling them that they must save the food for the days ahead: tonight they will all celebrate his good fortune by dining at Cafe Momus, and he will pay.

The friends are interrupted by Benoît, the landlord, who arrives to collect the rent. They flatter him and ply him with wine. In his drunkenness, he begins to boast of his amorous adventures, but when he also reveals that he is married, they thrust him from the room—without the rent payment—in comic moral indignation. The rent money is divided for their evening out in the Quartier Latin.

Marcello, Schaunard and Colline go out, but Rodolfo remains alone for a moment in order to finish an article he is writing, promising to join his friends soon. There is a knock at the door. It is a girl who lives in another room in the building. Her candle has blown out, and she has no matches; she asks Rodolfo to light it. She is briefly overcome with faintness, and Rodolfo helps her to a chair and offers her a glass of wine. She thanks him. After a few minutes, she says that she is better and must go. But as she turns to leave, she realizes that she has lost her key.

Her candle goes out in the draught and Rodolfo’s candle goes out too; the pair stumble in the dark. Rodolfo, eager to spend time with the girl, to whom he is already attracted, finds the key and pockets it, feigning innocence. He takes her cold hand (Che gelida manina – “What a cold little hand”) and tells her of his life as a poet, then asks her to tell him more about her life. The girl says her name is Mimì (Sì, mi chiamano Mimì – “Yes, they call me Mimì”), and describes her simple life as an embroiderer. Impatiently, the waiting friends call Rodolfo. He answers and turns to see Mimì bathed in moonlight (duet, Rodolfo and Mimì: O soave fanciulla – “Oh lovely girl”). They realize that they have fallen in love. Rodolfo suggests remaining at home with Mimì, but she decides to accompany him to the Cafe Momus. As they leave, they sing of their newfound love.

Here are the lyrics, both the original Italian and an English translation, for “Che gelida manina” from Puccini’s La Boheme. This is a commercial site, but the translation will be helpful to understand what Rodofo says when he first meets the woman he falls in love with, Mimi.

Here are the lyrics, both the original Italian and an English translation, for “Si, mi chiamano Mimi” from Puccini’s La Boheme. This is a commercial site (about.com) so unfortunately there are some ads that get in the way, but the translation will be helpful to understand what Mimi says in response to Rodolfo’s aria “Che gelida manina.”