This reading provides an introduction to the concept of melody in music and some of the specific melodic terms we’ll encounter in our study of early music. Once we’ve completed our study of the Middle Ages, Renaissance, and Baroque, we’ll be introduced to some new melodic terms that developed in the Classical era.

Melody is one of the most basic elements of music. On the most fundamental level, a melody consists of a series of pitches. The relationship of those pitches, in other words the contrast between higher and lower pitches and/or the repetition of the same pitch, is what we recognize as a melody or tune. Of course in Western music these pitches usually have definite durations, but we’ll talk more about the role of duration and time in our discussion of the musical element rhythm. An important thing to remember about melody is its linear or horizontal nature. Melodies are written out in horizontal lines on the printed page, and melodies flow past our ears one note at a time like a line of cars on a street or train. While that flow of pitches is the product of sound waves that are travelling outward from their source in all directions, most listeners draw an unconscious connection between their experience of a melodic series and the experience of watching objects pass by (for example, the passage of a train – horizontal movement). This linear concept is worth remembering when we learn about harmony later. Harmony involves groups of notes or chords played together to create “stack” of sounds that are pleasing to the ear. Notice the vertical concept there: “stacks” of pitches played at the same time in harmony versus a line of pitches played one after the other in a melody. This question of horizontal and vertical is also relevant to the element of texture as texture is largely based on whether the music was woven from independent melodic lines or built on successive harmonic stacks. So while melody may seem like a very simple concept that needs little explanation, the ability to recognize the linear flow of one or more melodies can give a listener (such as a student taking a listening exam) important clues as to historical origins and stylistic categories to which that piece belongs.

A melody that stays on the same pitch too long is not very interesting to listen to. As a melody progresses, the pitches usually move up or down. This movement can happen gradually or rapidly. One can picture a line that goes up steeply when the melody suddenly jumps to a much higher note, or that goes down slowly when the melody gently falls. Such a line gives the contour or shape of the melodic line. You can often get a good idea of the shape of this line by looking at the melody as it is written on the staff, but you can also hear it as you listen to the music.

Arch shapes (in which the melody rises and then falls) are easy to find in many melodies.

You can also describe the shape of a melody verbally. For example, you can speak of a “rising melody” or of an “arch-shaped” phrase. Extra notes, such as trills and slides, may be added to a melodic line either by the composer or the performer to make the melody more complex and interesting. These additions are referred to as ornaments or embellishments.

A melody that rises and falls quickly, with large intervals between one note and the next, is disjunct. One may also speak of “leaps” in the melody. Many melodies are a mixture of conjunct and disjunct motion. 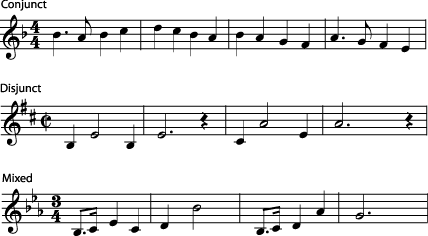 Melodies have always been divided smaller constituent parts. Over the course of music history the terms used to describe these shorter melodic segments have changed, especially as new genres have developed that take a different approach to melodic material. It is important not only to know these terms and what they mean, but also to understand their historical context. Students sometimes make the mistake of describing the melodic divisions of a particular historical period or genre using terms from a different period or genre. When writing to demonstrate understanding of a musical topic it is necessary to use the terms appropriate to that topic. The following examples are meant to provide a basic introduction to the terms for melodic divisions and their context that will be most helpful as we survey the periods of the Middle Ages, Renaissance, and Baroque.

It should not come as a surprise that a genre that has been in use as long and as widely as Gregorian chant has an astonishing abundance of terms for various melodic structures. The fact that plainchant is relies so heavily on the element of melody for its composition only increases the number of melodic terms. We will not be studying chant in enough detail to need to know this extensive catalogue of melodic names, but anyone wishing a brief introduction could read the introductory paragraphs of the Wikipedia article on Gregorian Chant. For the purposes of our class, it will be enough to recognize that most plainchant employs conjunct motion as we won’t delve into chant enough to need to understand its melodic divisions.

In the Middle Ages and early Renaissance the most common method of composition was to take a pre-existing melody, a Gregorian chant or popular tune, as a foundation around which additional melodic lines were composed. The pre-existing tune was known as a cantus firmus, which literally means “fixed song.” This method suited the tastes of its day, but the use of an existing tune limited a composer’s creative options. As the Renaissance progressed composers began to chafe at that limitation and experimented with imitation as an alternative. Imitation involved the writing of an entirely new melodic idea which was presented in one part and then successively repeated or imitated by each additional part as it entered. Each melodic idea thus imitated was called a point of imitation. These points of imitation were often not repeated. The composer simply continued to write new melodic material that was imitated in all parts or voices as the piece progressed.

As we study the Baroque we will find ourselves using the term theme to refer to melodic ideas. The term theme is borrowed from the world of literature and is used in music with some of the same implications it has in writing. A theme in a story is a central idea or concept around which the entire story revolves. Likewise in music, a theme is a melodic idea that serves as a foundation for an entire piece. A theme in Baroque music, unlike the melodic ideas that were sung only once as a point of imitation in a Renaissance work, is a melody that would be heard repeatedly throughout the course of the work. In some highly structured genres, such as the fugue, elaborate rules were developed for the treatment of this central melodic idea and it was given a specific name: subject. The term subject is used almost exclusively in fugal composition. Important melodic ideas in other Baroque genres are most appropriately referred to as themes.