One of the aims of the scholars in the Florentine Camerata was to make the music serve the text. They objected to the obscuring of the text and its meaning that was common in late Renaissance polyphony, and they sought to create a new musical style that would be more expressive and reflective of the text. To do this, they looked back to the traditions of ancient Greek drama—or at least to their limited understanding of those traditions. The result of their efforts was the singing style we refer to as monody. Though monody in its strictest form did not remain in use very long, it had enormous influence on the emerging vocal genres of opera, cantata, and oratorio.

In music, the term monody refers to a solo vocal style distinguished by having a single melodic line and instrumental accompaniment. More specifically it applies to Italian song of the early seventeenth century, particularly the period from about 1600 to 1640. The term itself is a recent invention of scholars: no composer of the seventeenth century ever called a piece a monody. In the Baroque, compositions in monodic style were labeled madrigals, motets, or even concertos (in the earlier sense of “concertato,” meaning “with instruments”). 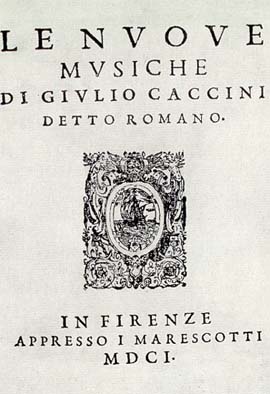 In monody, which developed out of an attempt by the Florentine Camerata in the 1580s to restore ancient Greek ideas of melody and declamation (probably with little historical accuracy), a solo voice sings a rhythmically free melodic line in a declamatory style. Early Baroque composer’s primary goal in monodic composition was to have the music conform to the natural rhythm and meaning of the text. This was a reaction to the complex polyphony of late Renaissance choral music in which the text was often obscured by the independence of the various lines. This vocal melody was sparsely accompanied by the bass line and improvised chords of basso continuo instrument pair. The development of monody was one of the defining characteristics of early Baroque practice, as opposed to late Renaissance style, in which groups of voices sang independently and with a greater balance between parts.

Existing musical genres which adopted the style of monody were the madrigal and the motet, both of which developed into solo forms after 1600.

Contrasting passages in monodies could be more melodic or more declamatory: these two styles of presentation eventually developed into the aria and the recitative, and the overall form merged with the cantata by about 1635.