Here is some additional information on Schoenberg’s Suite for Piano. Our playlist features the Trio, which is a portion of movement 5. Please note that this suite was the first piece composed entirely in Schoenberg’s twelve-tone technique. It’s also worth noting the connection via genre to the suites we studied in the Baroque era.

Arnold Schoenberg’s Suite for Piano (German: Suite für Klavier), Op. 25, is a twelve tone piece for piano composed between 1921 and 1923.

The work is the earliest in which Schoenberg employs a row of “12 tones related only to one another” in every movement: the earlier 5 Stücke, Op. 23 (1920–23) employs a 12-tone row only in the final Waltz movement, and the Serenade, Op. 24 uses a single row in its central Sonnet.

The Basic Set of the Suite for Piano consists of the following succession: E–F–G–D♭–G♭–E♭–A♭–D–B–C–A–B♭.

In form and style the work echoes many features of the Baroque suite.

A performance of the entire Suite für Klavier takes around 16 minutes. 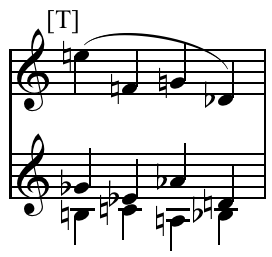 Figure 1. Polyphonic complex of threetetrachords from early sketch for Schoenberg’s Suite for Piano, Op. 25 (Whittall 2008, p. 34). The bottom being the BACH motif in retrograde: HCAB.

In this work Schoenberg employs transpositions and inversions of the row for the first time: the sets employed are P-0, I-0, P-6, I-6 and their retrogrades. Arnold Whittall has suggested that “The choice of transpositions at the sixth semitone—the tritone—may seem the consequence of a desire to hint at ‘tonic-dominant’ relationships, and the occurrence of the tritone G-D♭ in all four sets is a hierarchical feature which Schoenberg exploits in several places.”

The Gavotte movement contains, “a parody of a baroque keyboard suite that involves the cryptogram of Bach’s name as an important harmonic andmelodic device (Stuckenschmidt 1977, 108; Lewin 1982–83, n.9)” and a related quotation of Schoenberg’s op. 19/vi.

Edward T. Cone (1972) has catalogued what he believes to be a number of mistakes in Reinhold Brinkmann’s 1968 revised edition of Schoenberg’s piano music, one of which is in measure number five of the Suite’s “Gavotte”, G♭ instead of G♮. Henry Klumpenhouwer invokes Sigmund Freud’s concept of parapraxes (i.e., mental slips) to suggest a psychological context explaining the deviation from the note predicted from the tone row.