Symphony No. 8, Symphony of a Thousand

Mahler’s Eighth Symphony is a symphony in only the loosest sense. One of his best known works, it follows almost none of the standard conventions for a symphony. For example, it has only two movements, and it calls for multiple choirs in addition to an enormous orchestra. 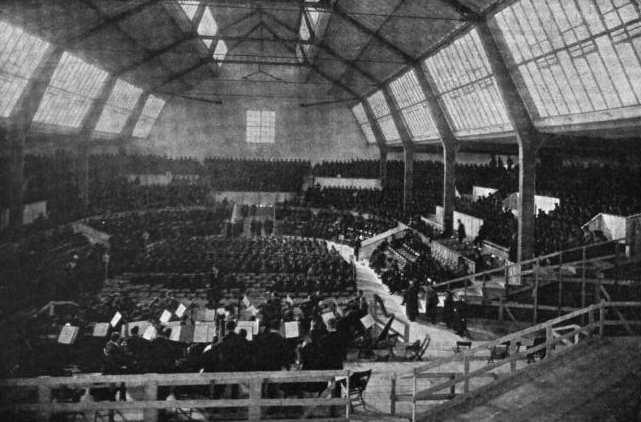 The Symphony No. 8 in E-flat major by Gustav Mahler is one of the largest-scale choral works in the classical concert repertoire. Because it requires huge instrumental and vocal forces it is frequently called the “Symphony of a Thousand,” although the work is often performed with fewer than a thousand, and Mahler himself did not sanction the name. The work was composed in a single inspired burst, at Maiernigg in southern Austria in the summer of 1906. The last of Mahler’s works that was premiered in his lifetime, the symphony was a critical and popular success when he conducted its first performance in Munich on12 September 1910.

The fusion of song and symphony had been a characteristic of Mahler’s early works. In his “middle” compositional period after 1901, a change of direction led him to produce three purely instrumental symphonies. The Eighth, marking the end of the middle period, returns to a combination of orchestra and voice in a symphonic context. The structure of the work is unconventional; instead of the normal framework of several movements, the piece is in two parts. Part I is based on the Latin text of a 9th-century Christian hymn for Pentecost, Veni creator spiritus (“Come, Creator Spirit”), and Part II is a setting of the words from the closing scene of Goethe’s Faust. The two parts are unified by a common idea, that of redemption through the power of love, a unity conveyed through shared musical themes.

Mahler had been convinced from the start of the work’s significance; in renouncing the pessimism that had marked much of his music, he offered the Eighth as an expression of confidence in the eternal human spirit. In the period following the composer’s death, performances were comparatively rare. However, from the mid-20th century onwards the symphony has been heard regularly in concert halls all over the world, and has been recorded many times. While recognising its wide popularity, modern critics have divided opinions on the work; Theodor W. Adorno, Robert Simpson and Jonathan Carr found its optimism unconvincing, and considered it artistically and musically inferior to Mahler’s other symphonies. However, it has also been compared—by Deryck Cooke—to Beethoven’s Ninth Symphony as a defining human statement for its century.

The second part of the symphony follows the narrative of the final stages in Goethe’s poem—the journey of Faust’s soul, rescued from the clutches of Mephistopheles, on to its final ascent into heaven. Landmann’s proposed sonata structure for the movement is based on a division, after an orchestral prelude, into five sections which he identifies musically as an exposition, three development episodes, and a finale. Since we only have the finale on our playlist, we’ll skip discussing the other episodes of Part II.

The final development episode is a hymn-like tenor solo and chorus, in which Doctor Marianus calls on the penitents to “Gaze aloft.” A short orchestral passage follows, scored for an eccentric chamber group consisting of piccolo, flute, harmonium, celesta, piano, harps and a string quartet. This acts as a transition to the finale, the Chorus Mysticus, which begins in E-flat major almost imperceptibly—Mahler’s notation here is Wie ein Hauch, “like a breath.” The sound rises in a gradual crescendo, as the solo voices alternately join or contrast with the chorus. As the climax approaches, many themes are reprised: the love theme, Gretchen’s song, the Accende from Part I. Finally, as the chorus concludes with “Eternal Womanhood draws us on high,” the off-stage brass re-enters with a final salute on the Veni creator motif, to end the symphony with a triumphant flourish.