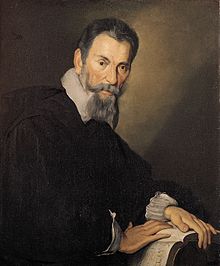 Claudio Monteverdi in 1640 by Bernardo Strozzi

Monteverdi’s work, often regarded as revolutionary, marked the transition from the Renaissance style of music to that of the Baroqueperiod.  He developed two individual styles of composition – the heritage of Renaissance polyphony and the new basso continuotechnique of the Baroque.  Monteverdi wrote one of the earliest operas, L’Orfeo, an innovative work that is the earliest surviving opera that is still regularly performed. He was recognized as an innovative composer and enjoyed considerable fame in his lifetime. 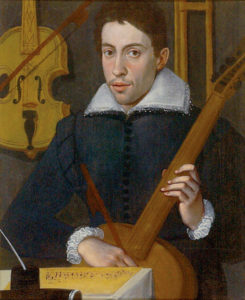 Claudio Monteverdi, circa 1597, by an anonymous artist (Ashmolean Museum, Oxford). Thought to be the earliest known image of Monteverdi, at about age 30, painted when he was still at the Gonzaga Court in Mantua.

Claudio Monteverdi was born in 1567 in Cremona, Lombardy. His father was Baldassare Monteverdi, a doctor, apothecary and amateur surgeon.  He was the oldest of five children. During his childhood, he was taught by Marc’Antonio Ingegneri, the maestro di cappella at the Cathedral of Cremona.  The Maestro’s job was to conduct important worship services in accordance with the liturgy of the Catholic Church.  Monteverdi learned about music as a member of the cathedral choir.  He also studied at the University of Cremona.  His first music was written for publication, including some motets and sacred madrigals, in 1582 and 1583.  His first five publications were: Sacrae cantiunculae, 1582 (a collection of miniature motets); Madrigali Spirituali, 1583 (a volume of which only the bass partbook is extant);Canzonette a tre voci, 1584 (a collection of three-voice canzonettes); and the five-part madrigals Book I, 1587, and Book II, 1590.  Monteverdi worked for the court of Mantua first as a singer and violist, then as music director .  He worked at the court of Vincenzo I of Gonzaga in Mantua as a vocalist and viol player.  In 1602, he was working as the court conductor.

In 1599 Monteverdi married the court singer Claudia Cattaneo, who died in September 1607.  They had two sons (Francesco and Massimilino) and a daughter (Leonora). Another daughter died shortly after birth.

By 1613, he had moved to San Marco in Venice where, as conductor, he quickly restored the musical standard of both the choir and the instrumentalists. The musical standard had declined due to the financial mismanagement of his predecessor, Giulio Cesare Martinengo.  The managers of the basilica were relieved to have such a distinguished musician in charge, as the music had been declining since the death of Giovanni Croce in 1609.

In 1632, he became a priest.  During the last years of his life, when he was often ill, he composed his two last masterpieces: Il ritorno d’Ulisse in patria (The Return of Ulysses, 1641), and the historic opera L’incoronazione di Poppea (The Coronation of Poppea, 1642), based on the life of the Roman emperor Nero.  L’incoronazione especially is considered a culminating point of Monteverdi’s work. It contains tragic, romantic, and comic scenes (a new development in opera), a more realistic portrayal of the characters, and warmer melodies than previously heard. It requires a smaller orchestra, and has a less prominent role for the choir. For a long period of time, Monteverdi’s operas were merely regarded as a historical or musical interest. Since the 1960s, The Coronation of Poppea has re-entered the repertoire of major opera companies worldwide.

Until the age of forty, Monteverdi worked primarily on madrigals, composing a total of nine books. It took Monteverdi about four years to finish his first book of twenty-one madrigals for five voices. As a whole, the first eight books of madrigals show the enormous development from Renaissance polyphonic music to the monodic style typical of Baroque music.The titles of his Madrigal books are:

The Fifth Book of Madrigals shows the shift from the late Renaissance style of music to the early Baroque.  The Quinto Libro(Fifth Book), published in 1605, was at the heart of the controversy between Monteverdi and Giovanni Artusi. Artusi attacked the “crudities” and “license” of the modern style of composing, centering his attacks on madrigals (including Cruda Amarilli, composed around 1600) (See Fabbri, Monteverdi, p. 60) from the fourth book.  Monteverdi made his reply in the introduction to the fifth book, with a proposal of the division of musical practice into two streams, which he called prima pratica, and seconda pratica. Prima pratica was described as the previous polyphonic ideal of the sixteenth century, with flowing strict counterpoint, prepared dissonance, and equality of voices. Seconda pratica used much freer counterpoint with an increasing hierarchy of voices, emphasizing soprano and bass. In Prima pratica the harmony controls the words.  In Seconda pratica the words should be in control of the harmonies.  This represented a move towards the new style of monody. The introduction of continuo in many of the madrigals was a further self-consciously modern feature.  In addition, the fifth book showed the beginnings of conscious functional tonality. 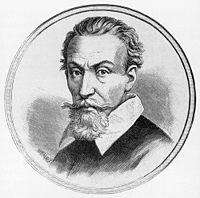 While in Venice, Monteverdi also finished his sixth (1614), seventh (1619), and eighth (1638) books of madrigals. The eighth is the largest, containing works written over a thirty-year period. Originally the work was to be dedicated to Ferdinand II, but because of his ill health, his son was made king in December 1636. When the work was first published in 1638 Monteverdi rededicated it to the new King Ferdinand III.  The eighth book includes the so-called Madrigali dei guerrieri et amorosi (Madrigals of War and Love).

The important preface of Monteverdi’s eighth madrigal book seems to be connected with his seconda pratica. He claims to have invented a new “agitated” style (Genere concitato, later called Stile concitato).

The book is divided into sections of War and Love each containing madrigals, a piece in dramatic form (genere rappresentativo), and a ballet. In the Madrigals of War, Monteverdi has organized poetry that describes the pursuits of love through the allegory of war; the hunt for love, and the battle to find love. In the second half of the book, the Madrigals of Love, Monteverdi organized poetry that describes the unhappiness of being in love, unfaithfulness, and ungrateful lovers who feel no shame. In his previous madrigal collections, Monteverdi usually set poetry from one or two poets he was in contact with through the court where he was employed. The Madrigals of War and Loverepresent an overview of the poets he has dealt with throughout his life; the classical poetry of Petrarch, poetry by his contemporaries (Tasso,Guarini, Marino, Rinuccini, Testi and Strozzi), or anonymous poets who Monteverdi found and adapted to his needs.

The ninth book of madrigals, published posthumously in 1651, contains lighter pieces such as canzonettas which were probably composed throughout Monteverdi’s lifetime representing both styles.

Monteverdi was often ill during the last years of his life. During this time, he composed his two last masterpieces: Il ritorno d’Ulisse in patria (The Return of Ulysses, 1640), and the historic opera, L’incoronazione di Poppea (The Coronation of Poppea, 1642), based on an episode in the life of the Roman emperor Nero. The libretto for Il ritorno d’Ulisse was written by Giacomo Badoarro and for L’incoronazione di Poppea by Giovanni Busenello. 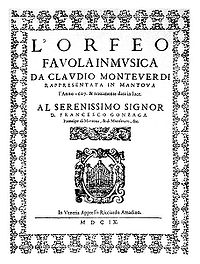 Monteverdi composed at least eighteen operas, but only L’Orfeo, Il ritorno d’Ulisse in patria, L’incoronazione di Poppea, and the famous aria, Lamento, from his second opera L’Arianna have survived. From monody (with melodic lines, intelligible text and placid accompanying music), it was a logical step for Monteverdi to begin composing opera. In 1607, his first opera, L’Orfeo, premiered in Mantua.  L’Orfeo was not the first opera, but it was the first mature opera, or one that realized all of its potential.  It was normal at that time for composers to create works on demand for special occasions, and this piece was part of the ducal celebrations of carnival.  (Monteverdi was later to write for the first opera houses supported by ticket sales which opened in Venice). L’Orfeo has dramatic power and lively orchestration. L’Orfeo is arguably the first example of a composer assigning specific instruments to parts in operas. It is also one of the first large compositions for which the exact instrumentation of the premiere is still known.  The plot is described in vivid musical pictures and the melodies are linear and clear. With this opera, Monteverdi created an entirely new style of music, the dramma per la musica or musical drama.

L’Arianna was the second opera written by Monteverdi. It is one of the most influential and famous specimens of early Baroque opera. It was first performed in Mantua in 1608.  Its subject matter was the ancient Greek legend of Ariadne and Theseus. Italian composer Ottorino Respighi famously orchestrated the “Lamento di Arianna” in 1908, and the work was premiered by the Berlin Philharmonic the same year under conductor Arthur Nikisch.[citation needed] The manuscript was restored and published as a critical edition in 2013 by Italian composer/conductor Salvatore Di Vittorio under publisher Edizioni Panastudio. A later completion of the “Lamento” from L’Arianna by Scottish composer Gareth Wilson (b. 1976) was performed at King’s College, London University on 29 November 2013, the 370th anniversary of Monteverdi’s death.

Monteverdi’s first church music publication was the archaic Mass In illo tempore to which the Vesper Psalms of 1610 were added.  The Vesper Psalms of 1610 are also one of the best examples of early repetition and contrast, with many of the parts having a clear ritornello. The published work is on a very grand scale and there has been some controversy as to whether all the movements were intended to be performed in a single service. However, there are various indications of internal unity. In its scope, it foreshadows such summits of Baroque music as Handel’s Messiah, and J.S. Bach’s St Matthew Passion. Each part (there are twenty-five in total) is fully developed in both a musical and dramatic sense – the instrumental textures are used to precise dramatic and emotional effect, in a way that had not been seen before.

In 1607, Aquilino Coppini published in Milan his “Musica tolta da i Madrigali di Claudio Monteverde, e d’altri autori … e fatta spirituale” for 5 and 6 voices, in which many of Monteverdi’s madrigals (especially from the third, fourth and fifth books) are presented with the original secular texts replaced with sacred Latin contrafacta carefully prepared by Coppini in order to fit the music in every aspect.