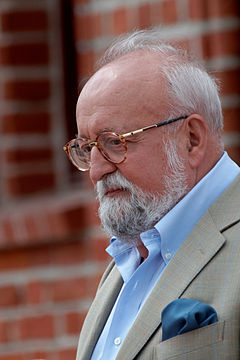 Born in Dębica to a lawyer, Penderecki studied music at Jagiellonian University and the Academy of Music in Kraków. After graduating from the Academy of Music, Penderecki became a teacher at the academy and he began his career as a composer in 1959 during the Warsaw Autumn festival. His Threnody to the Victims of Hiroshima for string orchestra and the choral work St. Luke Passion, have received popular acclaim. His first opera, The Devils of Loudun, was not immediately successful. Beginning in the mid-1970s, Penderecki’s composing style changed, with his first violin concerto focusing on the semitone and the tritone. His choral work Polish Requiem was written in the 1980s, with Penderecki expanding it in 1993 and 2005.

During his life, Penderecki has won several prestigious awards, including the Commander’s Cross in 1964, the Prix Italia in 1967 and 1968, the Knight’s Cross of the Order of Polonia Restituta in 1964, three Grammy Awards in 1987, 1998 and 2001, and the University of Louisville Grawemeyer Award for Music Composition in 1992.

Penderecki was born in Dębica, to Tadeusz Penderecki, a lawyer, and Zofia (née Wittgeinstein). Penderecki’s grandfather, Robert Berger, was a highly talented painter and director of the local bank at the time of Penderecki’s birth; Robert’s father Johann moved to Dębica from Breslau (now Wrocław) in the mid-19th century.  His grandmother was an Armenian from Isfahan. Penderecki used to go to Armenian Church in Kraków with her.  Penderecki was the youngest of three siblings; his sister, Barbara, who was married to a mining engineer, and his older brother, Janusz, was studying law and medicine at the time of his birth. Tadeusz was a violinist and also played piano.  In 1939, the Second World War broke out, and Penderecki’s family moved out of their apartment as the Ministry of Food was to operate there. They lived in a house belonging to a group of evicted Polish Jews.  After the war, Penderecki began attending grammar school in 1946. He began studying the violin under Stanisław Darłak, Dębica’s military bandmaster who organized an orchestra for the local music society after the war.  Upon graduating from grammar school, Penderecki moved to Kraków in 1951, where he attended Jagiellonian University.  He studied violin with Stanisław Tawroszewicz and music theory with Franciszek Skołyszewski.  In 1954, Penderecki entered the Academy of Music in Kraków and, having finished his studies on violin after his first year, focused enterely on composition. Penderecki’s main teacher there was Artur Malawski, a composer known for his choral works and orchestral works, as well as chamber music and songs. After Malawski’s death in 1957, Penderecki took further lessons with Stanisław Wiechowicz, a composer primarily known for his choral works.  At the time, the 1956 overthrow of Stalinism in Poland lifted strict Communist cultural censorship and opened the door to a wave of creativity.

On graduating from the Academy of Music in Kraków in 1958, Penderecki took up a teaching post at the Academy. His early works show the influence of Anton Webern and Pierre Boulez (Penderecki has also been influenced by Igor Stravinsky). Penderecki’s international recognition began in 1959 at the Warsaw Autumn with the premieres of the works Strophen, Psalms of David, and Emanations, but the piece that truly brought him to international attention was Threnody to the Victims of Hiroshima (see threnody and atomic bombing of Hiroshima), written for 52 string instruments. In it, he makes use of extended instrumental techniques (for example, playing behind the bridge, bowing on the tailpiece). There are many novel textures in the work, which makes great use of tone clusters. He originally titled the work 8′ 37″, but decided to dedicate it to the victims of Hiroshima.

Fluorescences followed a year later; it increases the orchestral density with more wind and brass, and an enormous percussion section of 32 instruments for six players including a Mexican güiro, typewriters, gongs and other unusual instruments. The piece was composed for the Donaueschingen Festival of contemporary music of 1962, and its performance was regarded as provocative and controversial. Even the score appeared revolutionary; the form of graphic notation that Penderecki had developed eschewed the familiar look of notes on a staff, instead representing music as morphing sounds.  His intentions at this stage were quite Cagean: “All I’m interested in is liberating sound beyond all tradition.”  This preoccupation with sound culminated in De Natura Sonoris I, which frequently calls upon the orchestra to use non-standard playing techniques to produce original sounds and colours. A sequel, De Natura Sonoris II, was composed in 1971: with its more limited orchestra, it incorporates more elements of post-Romanticism than its predecessor. This foreshadowed Penderecki’s renunciation of the avant-garde in the mid-1970s, although both pieces feature dramatic glissandos, dense clusters, and a use of harmonics, and unusual instruments (the musical saw features in the second piece).

In 1968 Penderecki received State Prize 1st class.  Due to the jubilee of People’s Republic of Poland he received Commander’s Cross (1974) and Knight’s Cross of Order of Polonia Restituta (1964).