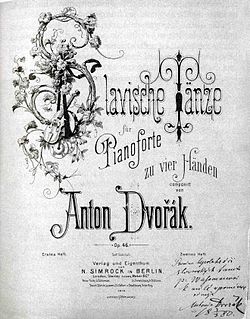 The title page of the first series of Slavonic Dances with Dvořák’s dedication to Mr. Wassman

The Slavonic Dances (Czech: Slovanské tance) are a series of 16 orchestral pieces composed by Antonín Dvořák in 1878 and 1886 and published in two sets as Opus 46 and Opus 72 respectively. Originally written for piano four hands, the Slavonic Dances were inspired by Johannes Brahms’s own Hungarian Dances and were orchestrated at the request of Dvořák’s publisher soon after composition. The pieces, lively and overtly nationalistic, were well received at the time and today are among the composer’s most memorable works, occasionally making appearances in popular culture.

Prior to the publication of the Slavonic Dances, Op. 46, Dvořák was a relatively unknown composer and was of modest means. Consequently, he had applied for the Austrian State Prize fellowship (German `Stipendium’) in order to fund his composing work. After he won the prize 3 times in 4 years (1874, 1876–77), Johannes Brahms, as one of the members of the committee responsible for awarding the stipend, referred Dvořák to his own publisher, Fritz Simrock. The first of Dvořák’s music to be published by Simrock was the Moravian Duets, which attained widespread success; encouraged, Simrock asked the composer to write something with a dance-like character.

Unsure how to begin, Dvořák used Brahms’s Hungarian Dances as a model—but only as a model; there are a number of important differences between the two works. For example, whereas Brahms made use of actual Hungarian folk melodies, Dvořák only made use of the characteristic rhythms of Slavic folk music: the melodies are entirely his own. Simrock was immediately impressed by the music Dvořák produced (originally for piano four hands), and asked the composer for an orchestral version as well. Both versions were published within the year, and quickly established Dvořák’s international reputation. The enormous success of the Opus 46 dances led Simrock to request another set of Slavonic Dances in 1886; Dvořák’s subsequent Opus 72 dances met with a similar reception.

The orchestration for the Slavonic Dances, with minor variations for each number, is as follows:

The types of dances upon which Dvořák based his music include the furiant, the dumka, the polka, the sousedská, the skočná, the mazurka, the odzemek, the špacírka, the kolo and the polonaise. A full performance of each opus typically takes approximately 40 minutes.

The dances of this opus are sometimes numbered separately from the first and sometimes as numbers 9–16. Most editions give both numbers.