History of the String Quartet

A string quartet is a musical ensemble of four string players – two violin players, a violist and a cellist – or a piece written to be performed by such a group. The string quartet is one of the most prominent chamber ensembles in classical music, with most major composers, from the late 18th century onwards, writing string quartets. 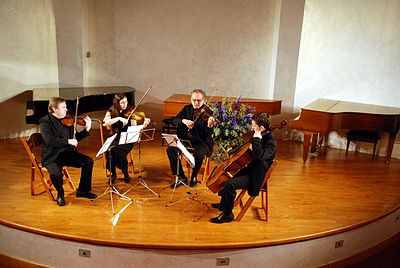 A string quartet in performance. From left to right – violin 1, violin 2, viola, cello 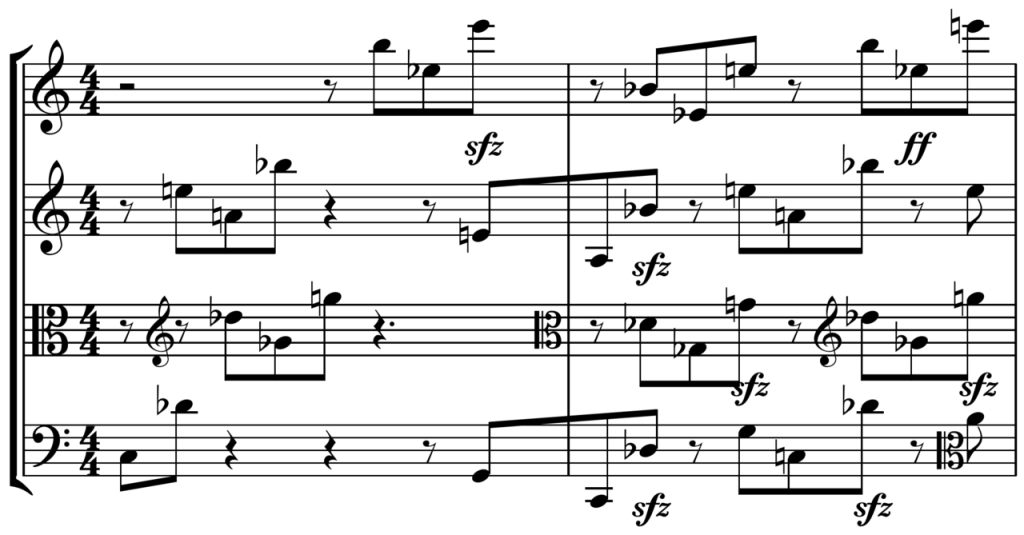 A string quartet in performance. From left to right – violin 1, violin 2, cello, viola

The origins of the string quartet can be traced back to the Baroque trio sonata, in which two solo instruments performed with a continuo section consisting of a bass instrument (such as the cello) and keyboard. A very early example is a four-part sonata for string ensemble by Gregorio Allegri (1582–1652) that might be considered an important prototype string quartet. By the early 18th century, composers were often adding a third soloist; and moreover it became common to omit the keyboard part, letting the cello support the bass line alone. Thus when Alessandro Scarlatti wrote a set of six works entitled “Sonata à Quattro per due Violini, Violetta [viola], e Violoncello senza Cembalo” (Sonata for four instruments: two violins, viola, and cello without harpsichord), this was a natural evolution from existing tradition.

The string quartet rose to prominence with the work of Joseph Haydn. Haydn’s own discovery of the quartet form appears to have arisen essentially by accident.  The young composer was working for Baron Carl von Joseph Edler von Fürnberg sometime around 1755-1757 at his country estate in Weinzierl, about fifty miles from Vienna. The Baron wanted to hear music, and the available players happened to be two violinists, a violist, and a cellist. Haydn’s early biographer Georg August Griesinger tells the story thus:

The following purely chance circumstance had led him to try his luck at the composition of quartets. A Baron Fürnberg had a place in Weinzierl, several stages from Vienna, and he invited from time to time his pastor, his manager, Haydn, and Albrechtsberger (a brother of the celebrated contrapuntist Albrechtsberger) in order to have a little music. Fürnberg requested Haydn to compose something that could be performed by these four amateurs. Haydn, then eighteen years old, took up this proposal, and so originated his first quartet which, immediately it appeared, received such general approval that Haydn took courage to work further in this form.

Haydn went on to write nine other quartets around this time. These works were published as his Op. 1 and Op. 2; one quartet went unpublished, and some of the early “quartets” are actually symphonies missing their wind parts. They have five movements and take the form: fast movement, minuet and trio I, slow movement, minuet and trio II, and fast finale. As Finscher notes, they draw stylistically on the Austrian divertimento tradition.

Haydn then ceased to write quartets for a number of years, but took up the genre again in 1769-1772 with the 18 quartets of Ops. 9, 17, and 20. These are written in a form that became established as standard both for Haydn and for other composers, namely four movements, consisting of a fast movement, a slow movement, a minuet and trio and a fast finale (see below).

Ever since Haydn’s day the string quartet has been prestigious and considered a true test of the composer’s art. This may be partly because the palette of sound is more restricted than with orchestral music, forcing the music to stand more on its own rather than relying on tonal color; or from the inherently contrapuntaltendency in music written for four equal instruments.

Quartet composition flourished in the Classical era, with Mozart, Beethoven and Schubert writing famous series of quartets to set alongside Haydn’s. A slight slackening in the pace of quartet composition occurred in the 19th century; here, composers often wrote only one quartet, perhaps to show that they could fully command this hallowed genre, although Antonín Dvořák wrote a series of 14. With the onset of the Modern era of classical music, the quartet returned to full popularity among composers, and played a key role in the development of Arnold Schoenberg, Béla Bartók, and Dmitri Shostakovich especially. After WWII, some composers, such as Pierre Boulez and Olivier Messiaen questioned the relevance of the string quartet and avoided writing them. However, from the 1960s onwards, many composers have shown a renewed interest in the genre.

A composition for four players of stringed instruments may be in any form. Quartets written in the classical period usually have four movements with a large-scale structure similar to that of a symphony:

Substantial modifications to the typical structure were already achieved in Beethoven’s later quartets, and despite some notable examples to the contrary, composers writing in the twentieth century increasingly abandoned this structure.

Some of the most popular or widely acclaimed works for string quartet include:

Whereas individual string players often group together to make ad hoc string quartets, others continue to play together for many years in ensembles which may be named after the first violinist (e.g. the Takács Quartet), a composer (e.g. the Borodin Quartet) or a location (e.g. the Budapest Quartet). Established quartets may undergo changes in membership whilst retaining their original name. Well-known string quartets can be found on the list of string quartet ensembles.