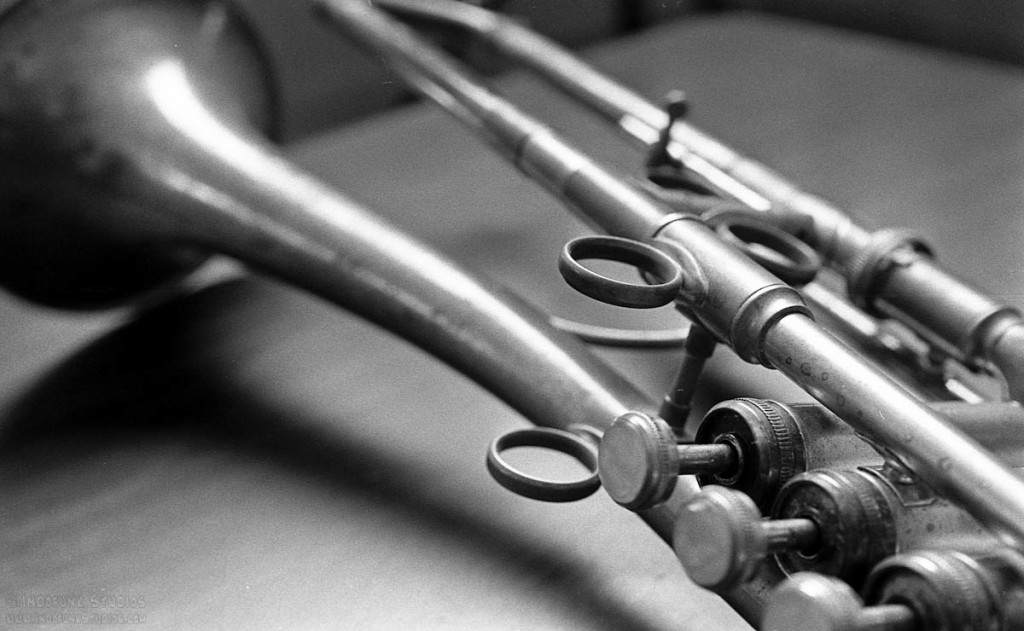 There are several factors involved in producing different pitches on a brass instrument. Slides, valves, crooks, or keys are used to change vibratory length of tubing, thus changing the available harmonic series, while the player’s embouchure, lip tension and air flow serve to select the specific harmonic produced from the available series.

The French horn (commonly known simply as the horn) is a brass instrument made of tubing wrapped into a coil with a flared bell, and is descended from the Medieval Horns. Valves used for changing pitch were introduced in 1815. The double horn in F/B♭ is the version most used by professional bands and orchestras. The main tubing on an F Horn is about 12–13 ft (3.7–4.0 m) long and that associated with the valves adds additional length to achieve up to about 17 ft (5.2 m) of tubing overall. A musician who plays the French horn is called a horn player (or less frequently, a hornist).

The trumpet has the highest register in the brass family. As a signaling device, trumpets have a very long history, dating back to at least 1500 BC; they have been used as musical instruments since the 15th century. They are played by blowing air through almost-closed lips, producing a “buzzing” sound that starts a standing wave vibration in the air column inside the instrument. Since the late 15th century they have primarily been constructed of brass tubing, usually bent twice into a rounded oblong shape.

There are several types of trumpet. The most common has a tubing length of about 1.48 m (4 ft 10 in). Earlier trumpets did not have valves, but modern instruments generally have either three piston valves or, more rarely, three rotary valves. Each valve increases the length of tubing when engaged, thereby lowering the pitch.

A musician who plays the trumpet is called a trumpet player or trumpeter.

The trombone’s sound is produced when the player’s vibrating lips (embouchure) cause the air column inside the instrument to vibrate. Nearly all trombones have a telescoping slide mechanism that varies the length of the instrument to change the pitch. The trombone is a predominantly cylindrical tube bent into an elongated “S” shape. Rather than being completely cylindrical from end to end, the tube is a complex series of tapers with the smallest at the mouthpiece receiver and the largest just before the bell flare. The design of these tapers affects the intonation of the instrument. The ‘slide’, the most distinctive feature of the trombone, allows the player to extend the length of the air column, lowering the pitch. 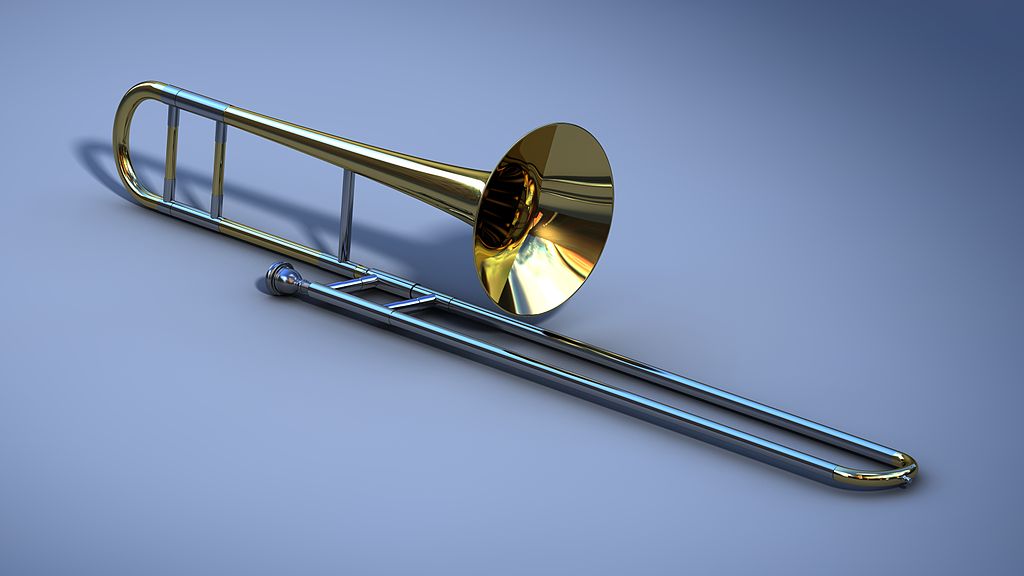 The word trombone derives from Italian tromba (trumpet) and -one (a suffix meaning “large”), so the name means “large trumpet”. The trombone has a predominantly cylindrical bore like its valved counterpart the baritone and in contrast to its conical valved counterparts, the euphonium and the horn. The most frequently encountered trombones are the tenor trombone and bass trombone. The once common alto trombone became less widely used as improvements in technique extended the upper range of the tenor, but it is now enjoying a resurgence due to its lighter sonority which is appreciated in many classical and early romantic works.

A person who plays the trombone is called a trombonist or trombone player.

The tuba is the largest and lowest-pitched musical instrument in the brass family. Sound is produced by vibrating or “buzzing” the lips into a large cupped mouthpiece. It first appeared in the mid 19th-century, making it one of the newer instruments in the modern orchestra and concert band. The tuba largely replaced the ophicleide. Tuba is Latin for ‘trumpet’. 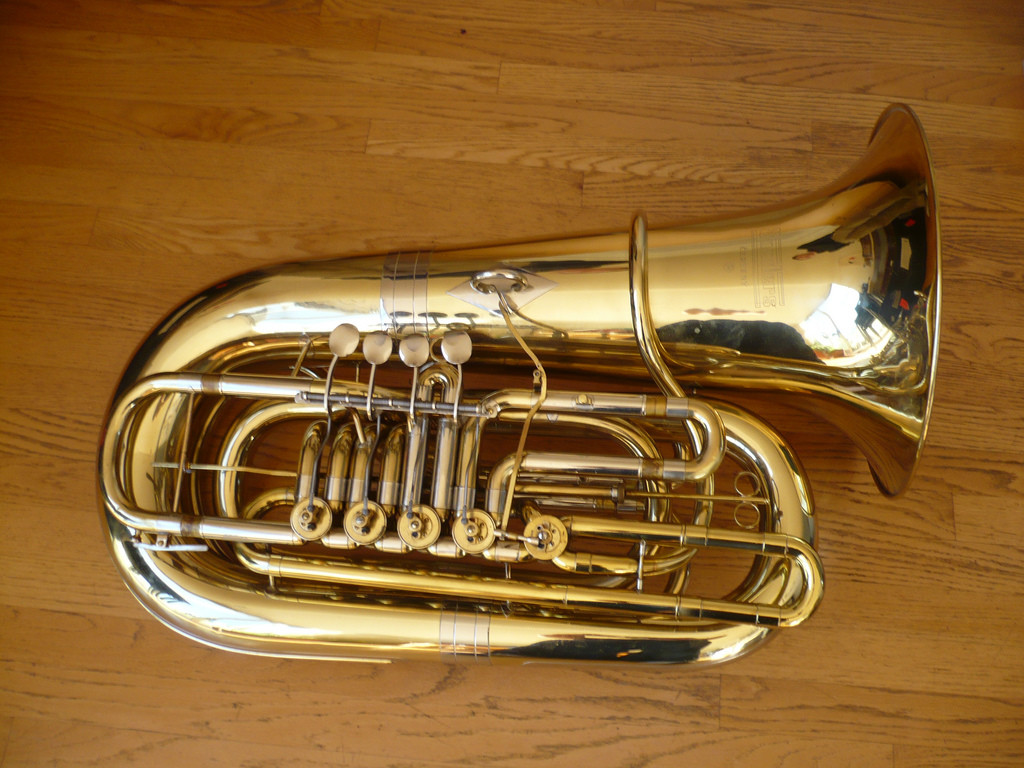 An orchestra usually has a single tuba, though an additional tuba may be asked for. It serves as the bass of the orchestral brass section and it can reinforce the bass voices of the strings and woodwinds. It provides the bass of brass quintets and choirs (though many small brass ensembles will use the euphonium or bass trombone as the lowest voice). It is the principal bass instrument in concert bands and military bands, and those ensembles generally have two to four tubas. It is also a solo instrument.

The main tube of a B♭ tuba is approximately 18 feet (5.5 m) long, while that of a C tuba is 16 feet (4.9 m), of an E♭ tuba 13 feet (4.0 m), and of an F tuba 12 feet (3.7 m). The instrument has a conical bore, meaning the bore diameter increases as a function of the tubing length from the mouthpiece to the bell. The conical bore causes the instrument to produce a preponderance of even-order harmonics.

A tuba with its tubing wrapped for placing the instrument on the player’s lap is usually called a concert tuba or simply a tuba. Tubas with the bell pointing forward (pavillon tournant) instead of upward are often called recording tubas because of their popularity in the early days of recorded music, as their sound could more easily be directed at the recording microphone. When wrapped to surround the body for cavalry bands on horseback or marching, it is traditionally known as a hélicon. The modern sousaphone, named after American bandmaster John Philip Sousa, resembles a hélicon with the bell pointed up and then curved to point forward.