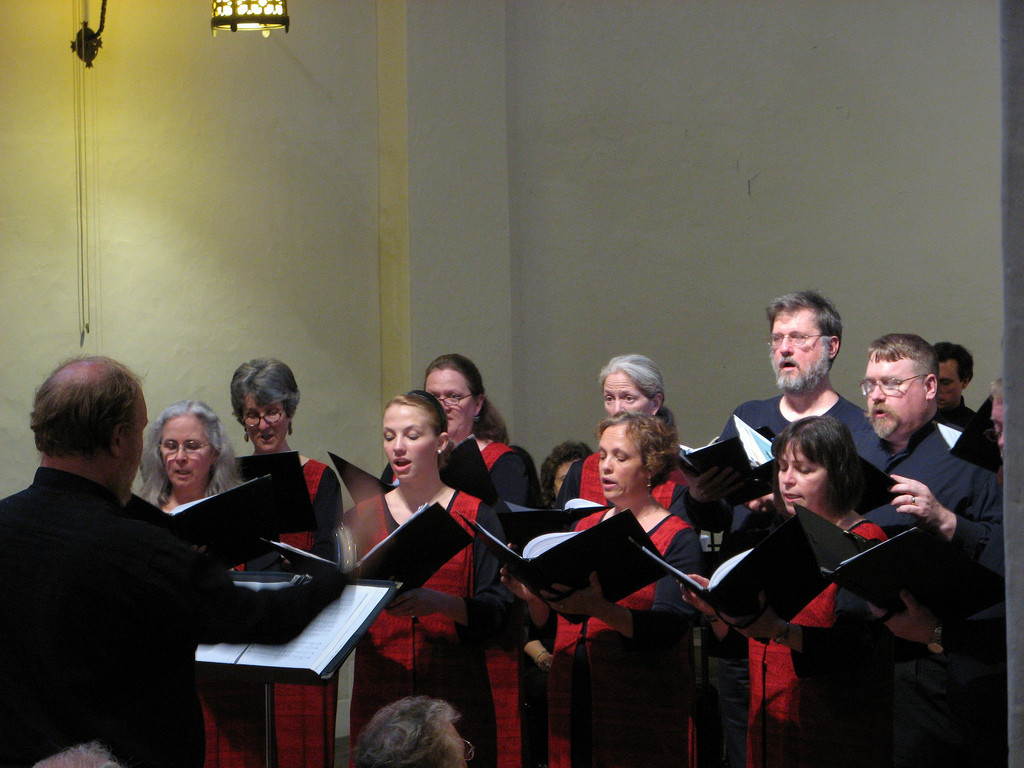 A cantata is a vocal composition with an instrumental accompaniment, typically in several movements, often involving a choir.

The meaning of the term changed over time, from the simple single voice madrigal of the early seventeenth century, to the multi-voice “cantata da camera” and the “cantata da chiesa” of the later part of that century, from the more substantial dramatic forms of the eighteenth century to the usually sacred-texted nineteenth-century cantata, which was effectively a type of short oratorio. Cantatas for use in the liturgy of church services are called church cantata or sometimes sacred cantata, others sometimes secular cantata. Johann Sebastian Bach composed around two hundred cantatas. Several cantatas were, and still are, written for special occasions, such as Christmas cantatas.

The term originated in the early seventeenth century simultaneously with opera and oratorio. Prior to that all “cultured” music was vocal. With the rise of instrumental music the term appeared, while the instrumental art became sufficiently developed to be embodied in sonatas. From the beginning of the seventeent century until late in the 18th, the cantata for one or two solo voices with accompaniment of basso continuo (and perhaps a few solo instruments) was a principal form of Italian vocal chamber music.

A cantata consisted first of a declamatory narrative or scene in recitative, held together by a primitive aria repeated at intervals. Fine examples may be found in the church music of Giacomo Carissimi; and the English vocal solos of Henry Purcell (such as Mad Tom and Mad Bess) show the utmost that can be made of this archaic form. With the rise of the da capo aria, the cantata became a group of two or three arias joined by recitative. George Frideric Handel’s numerous Italian duets and trios are examples on a rather large scale. His Latinmotet Silete Venti, for soprano solo, shows the use of this form in church music.

Differences from Other Musical Forms

The Italian solo cantata tended, when on a large scale, to become indistinguishable from a scene in an opera, in the same way the church cantata, solo or choral, is indistinguishable from a small oratorio or portion of an oratorio. This is equally evident whether we examine the unparalleled church cantatas of Bach, of which nearly two hundred are extant, or the Chandos Anthems of Handel. In Johann Sebastian Bach’s case many of the larger cantatas are actually called oratorios; and the Christmas Oratorio is a collection of six church cantatas actually intended for performance on six different days, though together forming as complete an artistic whole as any classical oratorio.

Cantatas were in great demand for the services of the Lutheran church. Sacred cantatas for the liturgy or other occasions were not only composed by Bach but also by Dieterich Buxtehude, Christoph Graupner, Gottfried Heinrich Stölzel and Georg Philipp Telemann, to name a few. Many secular cantatas were composed for events in the nobility. They were so similar in form to the sacred ones that many of them were parodied (in parts or completely) to sacred cantatas, for example in Bach’s Christmas Oratorio.