Dynamics refers to the volume of a sound or note. The term is also applied to the written or printed musical notation used to indicate dynamics. Dynamics are relative and do not refer to specific volume levels.

Traditionally, dynamic markings are based on Italian words, although there is nothing wrong with simply writing things like “quietly” or “louder” in the music. Forte means loud and piano means soft. The instrument commonly called the “piano,” by the way, was originally called a “pianoforte” because it could play dynamics, unlike earlier popular keyboard instruments such as the harpsichord and spinet.

The main dynamic levels are:

More subtle degrees of loudness or softness are indicated by:

Beyond f and p, there are also:

Listen to the dynamic changes in W.A. Mozart’s Overture to The Marriage of Figaro. Look for the dynamic markings (pp, p, ff, and p) in the score before you start listening.

To gradually change the dynamics, composers use crescendo and diminuendo (also decrescendo). 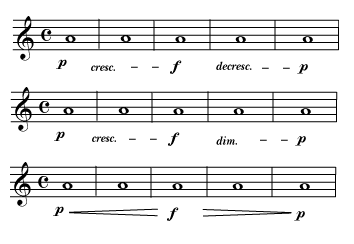 Listen to the dynamic changes in Ludwig van Beethoven’s Symphony No. 1, 3rd Movement, Menuetto, along with the score.

A composer may want a particular note to be louder than all the rest or may want the very beginning of a note to be loudest. Accents are markings that are used to indicate these especially strong-sounding notes. There are a few different types of written accents, but, like dynamics, the proper way to perform a given accent also depends on the instrument playing it, as well as the style and period of the music. Some accents may even be played by making the note longer or shorter than the other notes, in addition to, or even instead of being, louder.

The exact performance of each type of accent depends on the instrument and the style and period of the music, but the sforzando- and fortepiano-type accents are usually louder and longer, and more likely to be used in a long note that starts loudly and then suddenly gets much softer. Caret-type accents are more likely to be used to mark shorter notes that should be stronger than unmarked notes.