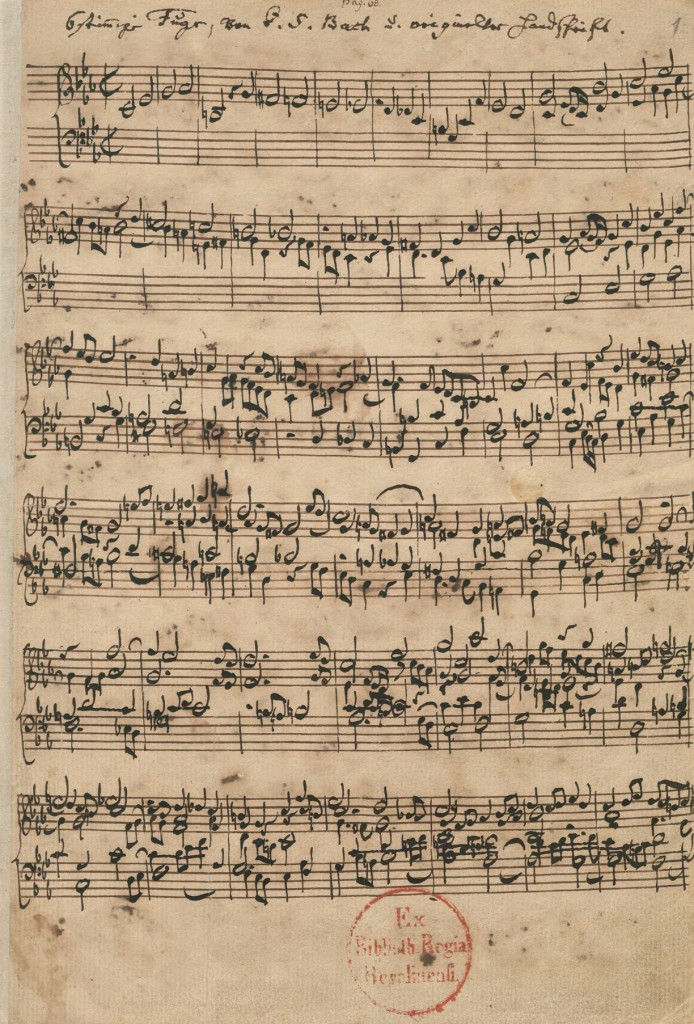 The first page of the manuscript of the “Ricercar a 6” BWV 1079 by Johann Sebastian Bach.

In music, a fugue is a contrapuntal compositional technique in two or more voices, built on a subject (theme) that is introduced at the beginning in imitation (repetition at different pitches) and recurs frequently in the course of the composition.

The English term fugue originated in the sixteenth century and is derived from the French word fugue or the Italian fuga. This in turn comes from Latin, also fuga, which is itself related to both fugere (“to flee”) and fugare (“to chase”). The adjectival form is fugal. Variants include fughetta (literally, “a small fugue”) and fugato (a passage in fugal style within another work that is not a fugue).

A fugue usually has three sections: an exposition, a development, and finally, a recapitulation that contains the return of the subject in the fugue’s tonic key, though not all fugues have a recapitulation. In the Middle Ages, the term was widely used to denote any works in canonic style; by the Renaissance, it had come to denote specifically imitative works. Since the seventeenth century, has described what is commonly regarded as the most fully developed procedure of imitative counterpoint.

Most fugues open with a short main theme, the subject, which then sounds successively in each voice (after the first voice is finished stating the subject, a second voice repeats the subject at a different pitch, and other voices repeat in the same way); when each voice has entered, the exposition is complete. This is often followed by a connecting passage, or episode, developed from previously heard material; further “entries” of the subject then are heard in related keys. Episodes (if applicable) and entries are usually alternated until the “final entry” of the subject, by which point the music has returned to the opening key, or tonic, which is often followed by closing material, the coda. In this sense, a fugue is a style of composition, rather than a fixed structure.

The table below illustrates the structure of the fugue exposition:

Listen to J. S. Bach’s, “Little” Fugue (G minor, BWV 578) below; the different colors represent the voices of the fugue. See if you can identify the subject and answers throughout the piece.

After the Exposition: Episodes, Development

Please listen to the following along with the score:

Musical score for Brandenburg Concerto No. 4