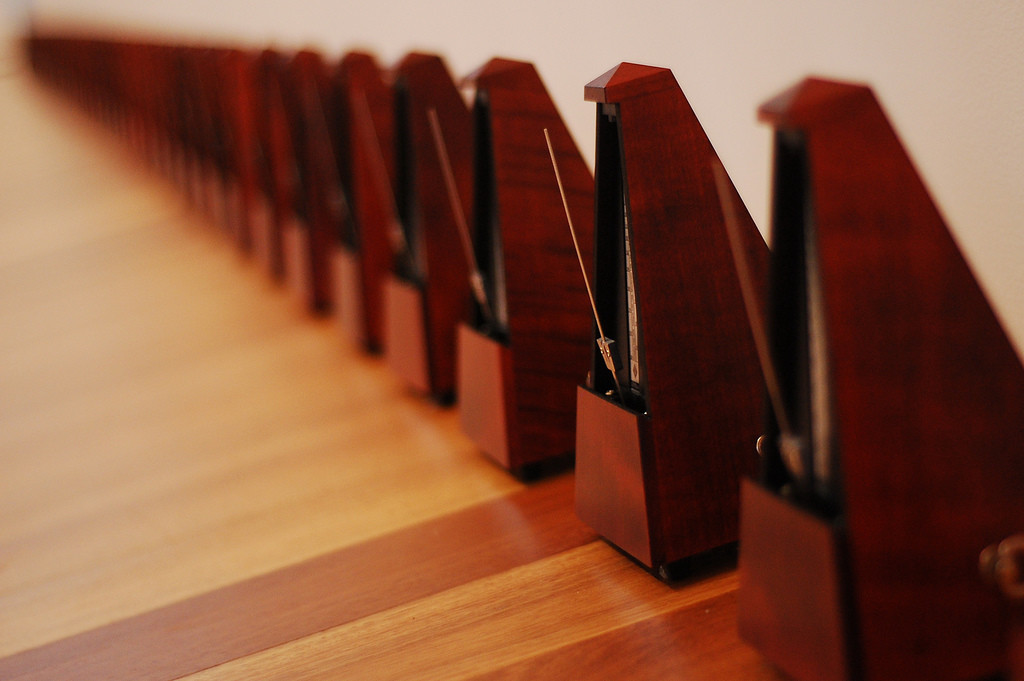 Tempo is the speed or pace of a piece. A piece of music’s tempo is typically written at the start of the score, and in modern Western music is usually indicated in beats per minute (BPM). This means that a particular note value (for example, a quarter note) is specified as the beat, and that the amount of time between successive beats is a specified fraction of a minute. The greater the number of beats per minute, the smaller the amount of time between successive beats, and thus the faster a piece must be played. For example, a tempo of 60 beats per minute signifies one beat per second, while a tempo of 120 beats per minute is twice as rapid.

Metronome markings are given in beats per minute. They can be estimated using a clock with a second hand, but the easiest way to find them is with a metronome, which is a tool that can give a beat-per-minute tempo as a clicking sound or a pulse of light. 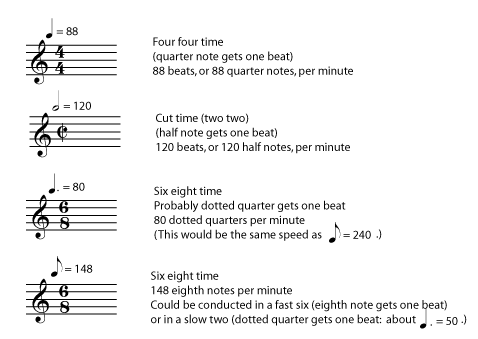 Mathematical tempo markings in BPM became increasingly popular during the first half of the 19th century, after the metronome had been invented by Johann Nepomuk Mälzel, although early metronomes were somewhat inconsistent. Instead of beats per minute, some 20th-century composers (e.g., Béla Bartók, Alberto Ginastera, and John Cage) specify the total playing time for a piece, from which the performer can derive tempo.

With the advent of modern electronics, BPM became an extremely precise measure. Music sequencers use the BPM system to denote tempo. Tempo is as crucial in contemporary music as it is in classical. In electronic dance music, accurate knowledge of a tune’s BPM is important to DJs for the purposes of beat matching.

In classical music it is customary to describe the tempo of a piece by one or more words. Most of these words are Italian, because many of the most important composers of the 17th century were Italian, and this period was when tempo indications were first used extensively and codified.

Before the metronome, words were the only way to describe the tempo of a composition. Yet, after the metronome’s invention, musicians continued to use these words, often additionally indicating the mood of the piece. This blurred the traditional distinction between tempo and mood indicators. For example, presto and allegro both indicate a speedy execution (presto being faster), but allegro also connotes joy (from its original meaning in Italian). Presto, on the other hand, simply indicates speed. Additional Italian words also indicate tempo and mood. For example, the “agitato” in the Allegro agitato of the last movement of George Gershwin’s piano concerto in F has both a tempo indication (undoubtedly faster than a usual Allegro) and a mood indication (“agitated”).