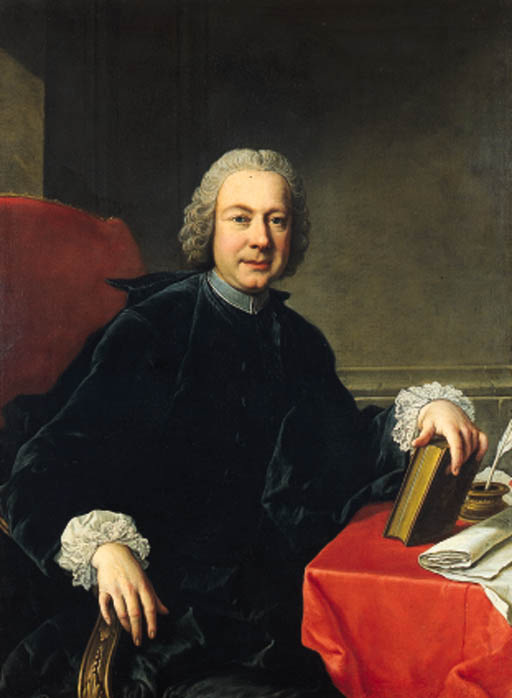 Despite its origins, opera did not remain confined to court audiences for long. In 1637, the idea of a “season” (Carnival) of publicly attended operas supported by ticket sales emerged in Venice. Monteverdi had moved to the city from Mantua and composed his last operas, Il ritorno d’Ulisse in patria and L’incoronazione di Poppea, for the Venetian theatre in the 1640s. His most important follower Francesco Cavalli helped spread opera throughout Italy. In these early baroque operas, broad comedy was blended with tragic elements in a mix that jarred some educated sensibilities, sparking the first of opera’s many reform movements, sponsored by the Arcadian Academy, which came to be associated with the poet Metastasio, whose libretti helped crystallize the genre of opera seria, which became the leading form of Italian opera until the end of the eighteenth century. Once the Metastasian ideal had been firmly established, comedy in baroque-era opera was reserved for what came to be called opera buffa. Before such elements were forced out of opera seria, many libretti had featured a separately unfolding comic plot as sort of an “opera-within-an-opera.” One reason for this was an attempt to attract members of the growing merchant class, newly wealthy, but still not as cultured as the nobility, to the public opera houses. These separate plots were almost immediately resurrected in a separately developing tradition that partly derived from the commedia dell’arte, a long-flourishing improvisatory stage tradition of Italy. Just as intermedi had once been performed in-between the acts of stage plays, operas in the new comic genre of “intermezzi”, which developed largely in Naples in the 1710s and ’20s, were initially staged during the intermissions of opera seria. They became so popular, however, that they were soon being offered as separate productions.

Comic characters had been a part of opera until the early eighteenth century, when “opera buffa” began to emerge as a separate genre. Opera buffa was a parallel development to opera seria and arose in reaction to the so-called first reform of Zeno and Metastasio. It was, in part, intended as a genre that the common man could relate to more easily. Whereas opera seria was an entertainment that was both made for and depicted kings and nobility, opera buffa was made for and depicted common people with more common problems. High-flown language was generally avoided in favor of dialogue that the lower class would relate to, often in the local dialect, and the stock characters were often derived from those of the Italian commedia dell’arte.

In the early eighteenth century, comic operas often appeared as short, one-act interludes known as intermezzi that were performed in between acts of opera seria. These gave way to the full-fledged opera buffa later in the eighteenth century. La serva padrona by Giovanni Battista Pergolesi (1710–1736), is the one intermezzo still performed with any regularity today, and provides an excellent example of the style.

Apart from Pergolesi, the first major composers of opera buffa were Nicola Logroscino, Baldassare Galuppi and Alessandro Scarlatti, all of them based in Naples or Venice.

The opera buffa’s importance diminished during the romantic period. Here, the forms were freer and less extended than in the serious genre and the set numbers were linked by recitativo secco, the exception being Donizetti’s Don Pasquale in 1843. With Rossini, a standard distribution of four characters is reached: a prima donna soubrette (soprano or mezzo); a light, amorous tenor; a basso cantante or baritone capable of lyrical, mostly ironical expression; and a basso buffo whose vocal skills, largely confined to clear articulation and the ability to “patter,” must also extend to the baritone for the purposes of comic duets.

The type of comedy could vary, and the range was great: from Rossini’s The Barber of Seville in 1816 which was purely comedic, to Mozart’s The Marriage of Figaro in 1786 which added drama and pathos. Another example of Romantic opera buffa would be Donizetti’s L’elisir d’amore of 1832.

Watch the following video clip from The Barber of Seville:

While opera seria deals with gods and ancient heroes and only occasionally contained comic scenes, opera buffa involves the predominant use of comic scenes, characters, and plot lines in a contemporary setting. The traditional model for opera seria had three acts, dealt with serious subjects in mythical settings, as stated above, and used high voices (both sopranos and castrati) for principal characters, often even for monarchs.

In contrast, the model that generally held for opera buffa was having two acts (as, for example, The Barber of Seville), presenting comic scenes and situations as earlier stated and using the lower male voices to the exclusion of the castrati. This led to the creation of the characteristic “basso buffo,” a specialist in patter who was the center of most of the comic action.

A well-known basso buffo role is Leporello in Mozart’s Don Giovanni. You can listen to an example below: 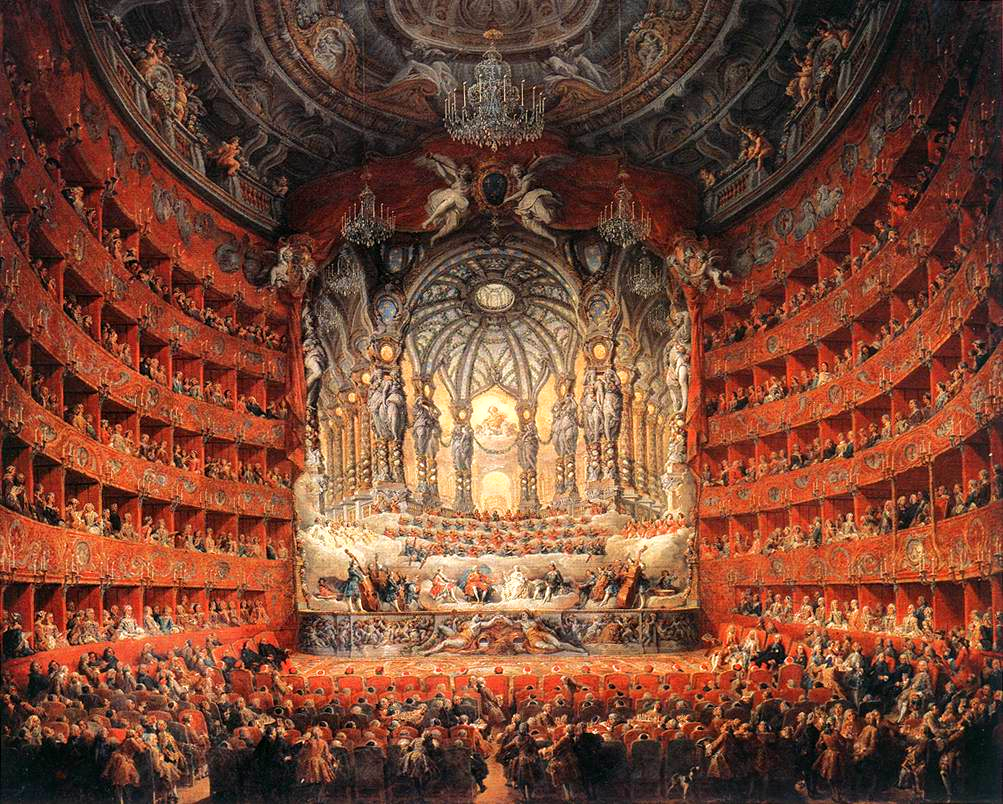 Opera seria was elevated in tone and highly stylized in form, usually consisting of secco recitative interspersed with long da capo arias. These afforded great opportunity for virtuosic singing and during the golden age of opera seria the singer really became the star. The role of the hero was usually written for the castrato voice; castrati such as Farinelli and Senesino, as well as female sopranos such as Faustina Bordoni, became in great demand throughout Europe as opera seria ruled the stage in every country except France. Indeed, Farinelli was one of the most famous singers of the eighteenth century. Italian opera set the baroque standard. Italian libretti were the norm, even when a German composer like Handel found himself composing the likes of Rinaldo and Giulio Cesare for London audiences. Italian libretti remained dominant in the classical period as well, for example in the operas of Mozart, who wrote in Vienna near the century’s close. Leading Italian-born composers of opera seria include Alessandro Scarlatti, Vivaldi, and Porpora. 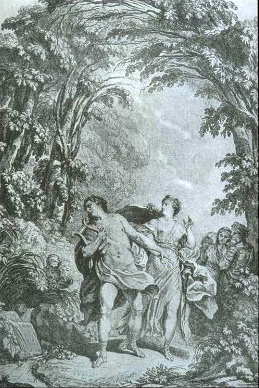 Reform: Gluck, the Attack on the Metastasian Ideal, and Mozart

Opera seria had its weaknesses and critics. The taste for embellishment on behalf of the superbly trained singers, and the use of spectacle as a replacement for dramatic purity and unity drew attacks. Francesco Algarotti’s Essay on the Opera (1755) proved to be an inspiration for Christoph Willibald Gluck’s reforms. He advocated that opera seria had to return to basics and that all the various elements—music (both instrumental and vocal), ballet, and staging—must be subservient to the overriding drama. In 1765 Melchior Grimmpublished “Poème lyrique”, an influential article for the Encyclopédie on lyric and opera librettos. Several composers of the period, including Niccolò Jommelli and Tommaso Traetta, attempted to put these ideals into practice. The first to succeed however, was Gluck. Gluck strove to achieve a “beautiful simplicity.” This is evident in his first reform opera, Orfeo ed Euridice, where his non-virtuosic vocal melodies are supported by simple harmonies and a richer orchestra presence throughout.

You can listen to an aria from Orfeo ed Euridice below:

Gluck’s reforms have had resonance throughout operatic history. Weber, Mozart and Wagner, in particular, were influenced by his ideals. Mozart, in many ways Gluck’s successor, combined a superb sense of drama, harmony, melody, and counterpoint to write a series of comedies, notably Così fan tutte, The Marriage of Figaro, and Don Giovanni (in collaboration with Lorenzo Da Ponte), which remain among the most-loved, popular and well-known operas today. But Mozart’s contribution to opera seria was more mixed; by his time it was dying away, and in spite of such fine works as Idomeneo and La clemenza di Tito, he would not succeed in bringing the art form back to life again. 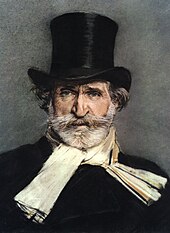 The bel canto opera movement flourished in the early nineteenth century and is exemplified by the operas of Rossini, Bellini, Donizetti, Pacini, Mercadante and many others. Literally “beautiful singing”, bel canto opera derives from the Italian stylistic singing school of the same name. Bel canto lines are typically florid and intricate, requiring supreme agility and pitch control. Examples of famous operas in the bel canto style include Rossini’s Il barbiere di Siviglia and La Cenerentola, as well as Donizetti’s Lucia di Lammermoor.

Following the bel canto era, a more direct, forceful style was rapidly popularized by Giuseppe Verdi, beginning with his biblical opera Nabucco. Verdi’s operas resonated with the growing spirit of Italian nationalism in the post-Napoleonic era, and he quickly became an icon of the patriotic movement (although his own politics were perhaps not quite so radical). In the early 1850s, Verdi produced his three most popular operas: Rigoletto, Il trovatore and La traviata. But he continued to develop his style, composing perhaps the greatest French Grand Opera, Don Carlos, and ending his career with twoShakespeare-inspired works, Otello and Falstaff, which reveal how far Italian opera had grown in sophistication since the early nineteenth century.

After Verdi, the sentimental “realistic” melodrama of verismo appeared in Italy. This was a style introduced by Pietro Mascagni’s Cavalleria rusticana and Ruggero Leoncavallo’s Pagliacci that came virtually to dominate the world’s opera stages with such popular works as Giacomo Puccini’s La bohème, Tosca, Madama Butterfly and Turandot. Later Italian composers, such as Berio and Nono, have experimented with modernism.