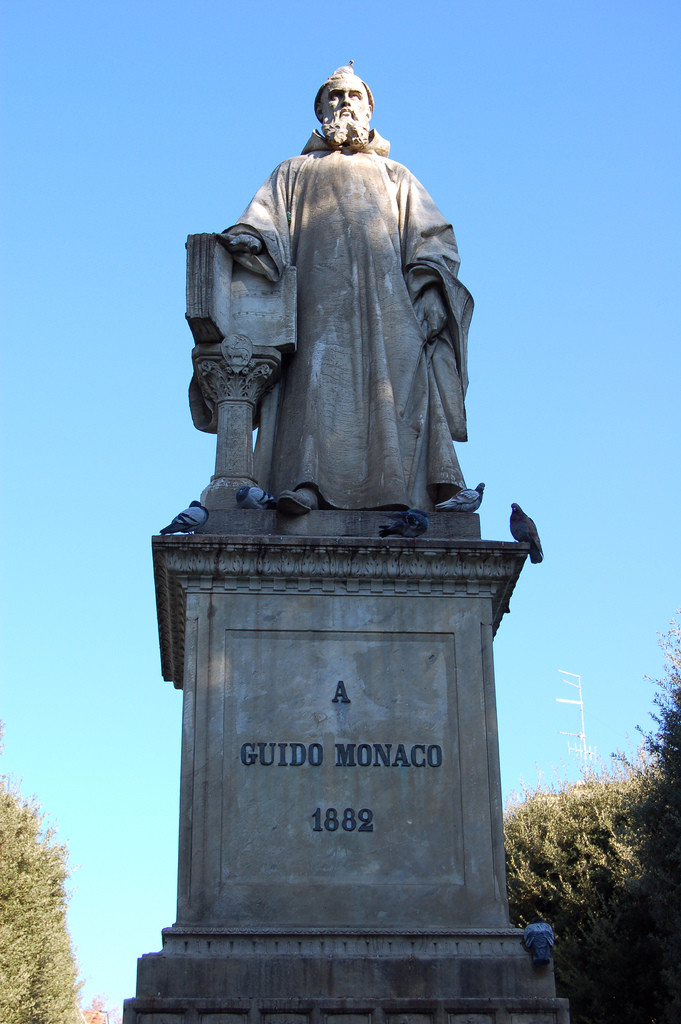 Statue of Guido of Arezzo (AKA Guido Monaco), 1882

Guido of Arezzo (also Guido Aretinus, Guido da Arezzo, Guido Monaco, or Guido d’Arezzo, or Guy of Arezzo) (991/992–after 1033) was a music theorist of the medieval era. He is regarded as the inventor of modern musical notation(staff notation) that replaced neumatic notation; his text, the Micrologus, was the second-most widely distributed treatise on music in the Middle Ages (after the writings of Boethius).

Guido was a monk of the Benedictine order from the Italian city-state of Arezzo. Recent research has dated his Micrologusto 1025 or 1026; since Guido stated in a letter that he was thirty-four when he wrote it, his birthdate is presumed to be around 991 or 992. His early career was spent at the monastery of Pomposa, on the Adriatic coast near Ferrara. While there, he noted the difficulty that singers had in remembering Gregorian chants.

He came up with a method for teaching the singers to learn chants in a short time, and quickly became famous throughout north Italy. However, he attracted the hostility of the other monks at the abbey, prompting him to move to Arezzo, a town which had no abbey, but which did have a large group of cathedral singers, whose training Bishop Tedald invited him to conduct.

While at Arezzo, he developed new techniques for teaching, such as staff notation and the use of the “ut–re–mi–fa–so–la” (do–re–mi–fa–so–la) mnemonic (solmization). The ut–re–mi-fa-so-la syllables are taken from the initial syllables of each of the first six half-lines of the first stanza of the hymn Ut queant laxis, whose text is attributed to the Italian monk and scholar Paulus Diaconus (though the musical line either shares a common ancestor with the earlier setting of Horace’s “Ode to Phyllis” (Odes 4.11) recorded in the Montpellier manuscript H425, or may even have been taken from it.)

Guido is credited with the invention of the Guidonian hand, a widely used mnemonic system where note names are mapped to parts of the human hand. However, only a rudimentary form of the Guidonian hand is actually described by Guido, and the fully elaborated system of natural, hard, and soft hexachords cannot be securely attributed to him. The Micrologus, written at the cathedral at Arezzo and dedicated to Tedald, contains Guido’s teaching method as it had developed by that time. Soon it had attracted the attention ofPope John XIX, who invited Guido to Rome. Most likely he went there in 1028, but he soon returned to Arezzo, due to his poor health. It was then that he announced in a letter to Michael of Pomposa (“Epistola de ignoto cantu“) his discovery of the “ut–re–mi” musical mnemonic. Little is known of him after this time. 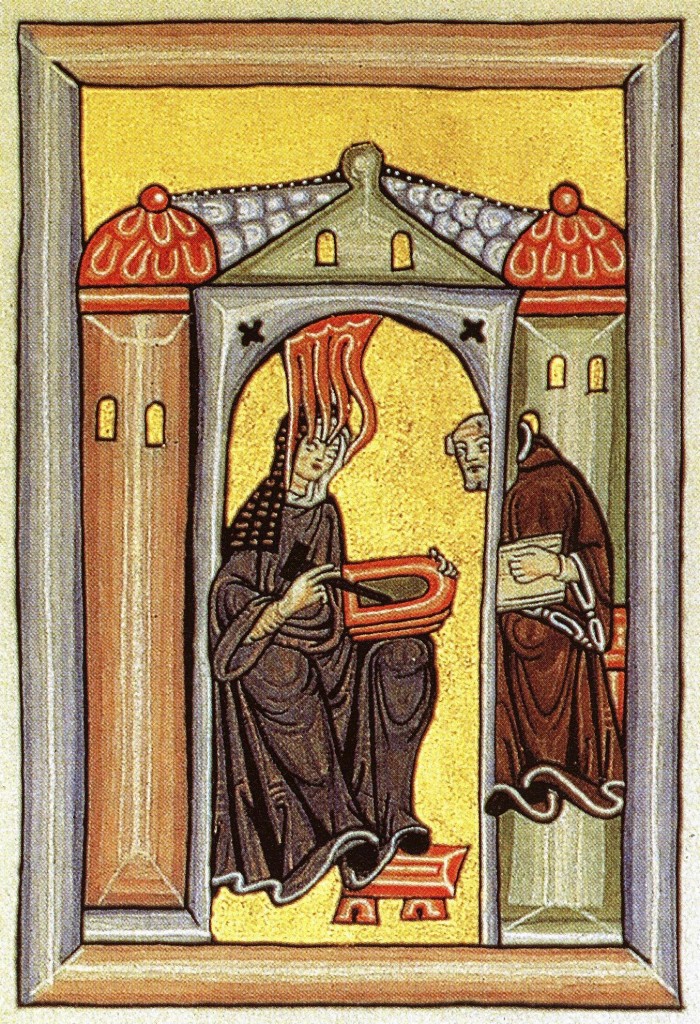 Hildegard was elected magistra by her fellow nuns in 1136; she founded the monasteries of Rupertsberg in 1150 and Eibingen in 1165. One of her works as a composer, the Ordo Virtutum, is an early example of liturgical drama and arguably the oldest surviving morality play. She wrote theological, botanical, and medicinal texts, as well as letters, liturgical songs, and poems, while supervising miniature illuminations in the Rupertsberg manuscript of her first work, Scivias.

Although the history of her formal consideration is complicated, she has been recognized as a saint by branches of the Roman Catholic Church for centuries. On 7 October 2012, Pope Benedict XVI named her a Doctor of the Church.

Attention in recent decades to women of the medieval Church has led to a great deal of popular interest in Hildegard’s music. In addition to the Ordo Virtutum, sixty-nine musical compositions, each with its own original poetic text, survive, and at least four other texts are known, though their musical notation has been lost. This is one of the largest repertoires among medieval composers.
In addition to the Ordo Virtutum Hildegard composed many liturgical songs that were collected into a cycle called the Symphonia armoniae celestium revelationum. The songs from the Symphonia are set to Hildegard’s own text and range from antiphons, hymns, and sequences, to responsories. Her music is described as monophonic, that is, consisting of exactly one melodic line. Its style is characterized by soaring melodies that can push the boundaries of the more staid ranges of traditional Gregorian chant. Though Hildegard’s music is often thought to stand outside the normal practices of monophonic monastic chant, current researchers are also exploring ways in which it may be viewed in comparison with her contemporaries, such as Hermannus Contractus. Another feature of Hildegard’s music that both reflects twelfth-century evolutions of chant and pushes those evolutions further is that it is highly melismatic, often with recurrent melodic units. Scholars such as Margot Fassler, Marianne Richert Pfau, and Beverly Lomer also note the intimate relationship between music and text in Hildegard’s compositions, whose rhetorical features are often more distinct than is common in twelfth-century chant. As with all medieval chant notation, Hildegard’s music lacks any indication of tempo or rhythm; the surviving manuscripts employ late German style notation, which uses very ornamental neumes. The reverence for the Virgin Mary reflected in music shows how deeply influenced and inspired Hildegard of Bingen and her community were by the Virgin Mary and the saints. One of her better known works, Ordo Virtutum (Play of the Virtues), is a morality play. It is uncertain when some of Hildegard’s compositions were composed, though the Ordo Virtutum is thought to have been composed as early as 1151. The morality play consists of monophonic melodies for the Anima (human soul) and sixteen Virtues. There is also one speaking part for the Devil. Scholars assert that the role of the Devil would have been played by Volmar, while Hildegard’s nuns would have played the parts of Anima and the Virtues.

The definition of viriditas or “greenness” is an earthly expression of the heavenly in an integrity that overcomes dualisms. This ‘greenness’ or power of life appears frequently in Hildegard’s works.

One scholar has asserted that Hildegard made a close association between music and the female body in her musical compositions. If so, the poetry and music of Hildegard’s Symphonia would be concerned with the anatomy of female desire thus described as Sapphonic, or pertaining to Sappho, connecting her to a history of female rhetoricians.