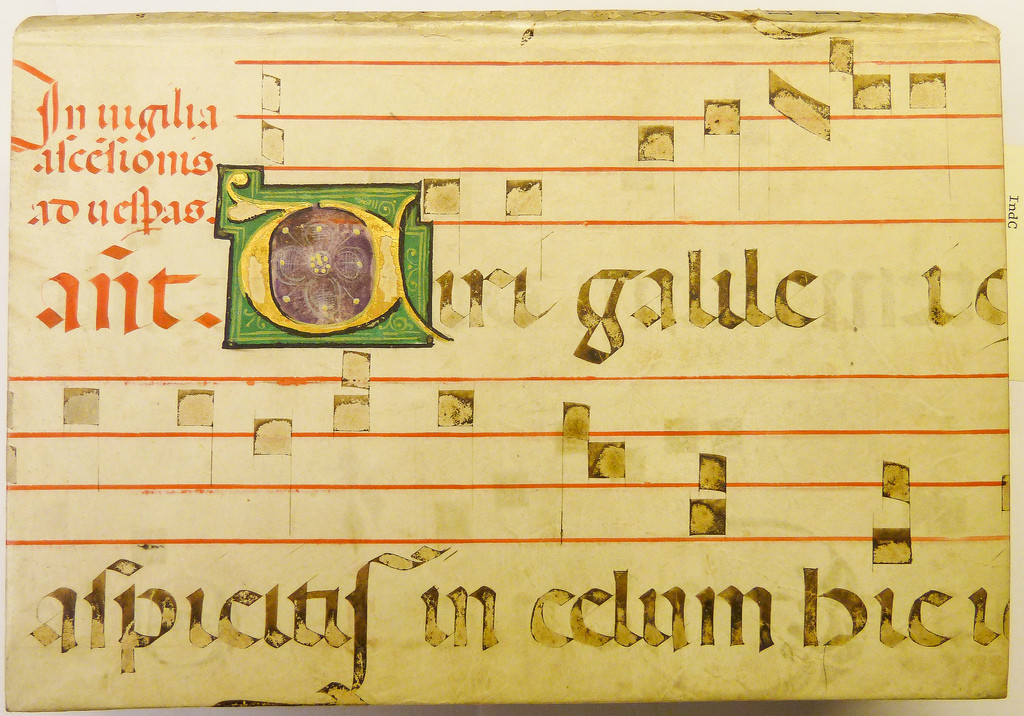 A neume  (sometimes spelled neum) is the basic element of Western and Eastern systems of musical notation prior to the invention of five-line staff notation. The word entered the English language in the Middle English forms “newme”, “nevme”, “neme” in the fifteenth century, from the Middle French “neume,” in turn from either medieval Latin “pneuma” or “neuma,” the former either from ancient Greek πνεῦμα pneuma (“breath”) or νεῦμα neuma (“sign”), or else directly from Greek as a corruption or an adaptation of the former.

The earliest neumes were inflective marks which indicated the general shape but not necessarily the exact notes or rhythms to be sung. Later developments included the use of heightened neumes which showed the relative pitches between neumes, and the creation of a four-line musical staff that identified particular pitches. Neumes do not generally indicate rhythm, but additional symbols were sometimes juxtaposed with neumes to indicate changes in articulation, duration, or tempo. Neumatic notation was later used in medieval music to indicate certain patterns of rhythm called rhythmic modes, and eventually evolved into modern musical notation. Neumatic notation remains standard in modern editions of plainchant.

The earliest Western notation for chant appears in the ninth century. These early staffless neumes, called cheironomic or in campo aperto, appeared as freeform wavy lines above the text. Various scholars see these as deriving from cheironomic hand gestures, from the ekphonetic notation of Byzantine chant, or from punctuation or accent marks. A single neume could represent a single pitch, or a series of pitches all sung on the same syllable. Cheironomic neumes indicated changes in pitch and duration within each syllable, but did not attempt to specify the pitches of individual notes, the intervals between pitches within a neume, nor the relative starting pitches of different syllables’ neumes.

There is evidence that the earliest Western musical notation, in the form of neumes in campo aperto (without staff-lines), was created at Metz around 800, as a result of Charlemagne’s desire for Frankish church musicians to retain the performance nuances used by the Roman singers.

Presumably these were intended only as mnemonics for melodies learned by ear. The earliest extant manuscripts (ninth–tenth centuries) of such neumes include:

Digraphic neumes in an 11th-century manuscript from Dijon. Letter names for individual notes in the neume are provided.

In the early eleventh century, Beneventan neumes (from the churches of Benevento in southern Italy) were written at varying distances from the text to indicate the overall shape of the melody; such neumes are called “heightened” or “diastematic” neumes, which showed the relative pitches between neumes. A few manuscripts from the same period use “digraphic” notation in which note names are included below the neumes. Shortly after this, one to four staff lines—an innovation traditionally ascribed to Guido d’Arezzo—clarified the exact relationship between pitches. One line was marked as representing a particular pitch, usually C or F. These neumes resembled the same thin, scripty style of the chironomic notation. By the eleventh century, chironomic neumes had evolved into square notation; in Germany, a variant called Gothic neumes continued to be used until the sixteenth century. This variant is also known as Hufnagel notation, as the used neumes resemble the nails (hufnagels) one uses to attach horseshoes. 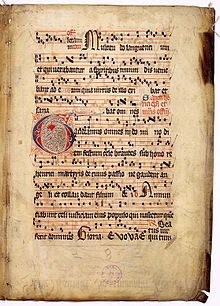 By the thirteenth century, the neumes of Gregorian chant were usually written in square notation on a staff with four lines and three spaces and a clef marker, as in the fourteenth–fifteenth-century Graduale Aboense shown here. In square notation, small groups of ascending notes on a syllable are shown as stacked squares, read from bottom to top, while descending notes are written with diamonds read from left to right. In melismatic chants, in which a syllable may be sung to a large number of notes, a series of smaller such groups of neumes are written in succession, read from left to right. A special symbol called the custos, placed at the end of a system, showed which pitch came next at the start of the following system. Special neumes such as the oriscus, quilisma, and liquescent neumes, indicate particular vocal treatments for these notes. This system of square notation is standard in modern chant books.