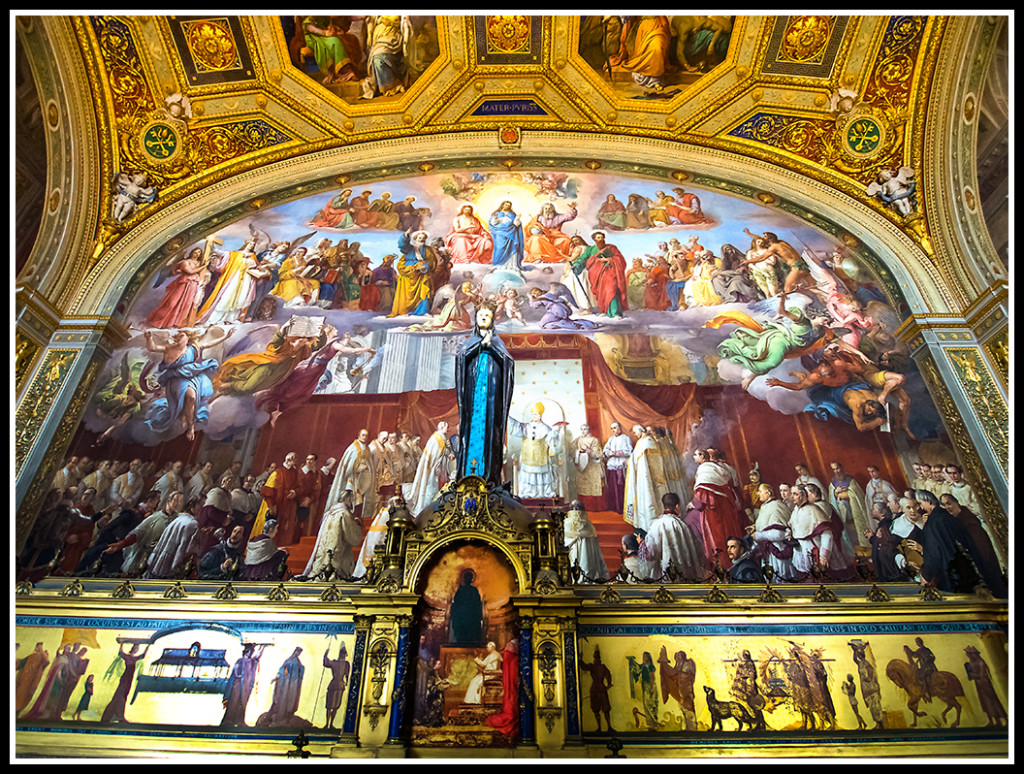 An oratorio is a large musical composition for orchestra, choir, and soloists. Like an opera, an oratorio includes the use of a choir, soloists, an ensemble, various distinguishable characters, and arias. However, opera is musical theatre, while oratorio is strictly a concert piece—though oratorios are sometimes staged as operas, and operas are sometimes presented in concert form. In an oratorio there is generally little or no interaction between the characters, and no props or elaborate costumes. A particularly important difference is in the typical subject matter of the text. Opera tends to deal with history and mythology, including age-old devices of romance, deception, and murder, whereas the plot of an oratorio often deals with sacred topics, making it appropriate for performance in the church. Protestant composers took their stories from the Bible, while Catholic composers looked to the lives of saints, as well as to Biblical topics. Oratorios became extremely popular in early seventeenth-century Italy partly because of the success of opera and the Catholic Church’s prohibition of spectacles during Lent. Oratorios became the main choice of music during that period for opera audiences.

Although medieval plays such as the Ludus Danielis, and Renaissance dialogue motets such as those of the Oltremontani had characteristics of an oratorio, the first oratorio is usually seen as Emilio de Cavalieri’s Rappresentatione di Anima, et di Corpo. Monteverdi composed Il Combattimento di Tancredi e Clorinda which can be considered as the first secularoratorio.

The origins of the oratorio can be found in sacred dialogues in Italy. These were settings of Biblical, Latin texts and musically were quite similar to motets. There was a strong narrative, dramatic emphasis and there were conversational exchanges between characters in the work. Giovanni Francesco Anerio’s Teatro harmonico spirituale (1619) is a set of fourteen dialogues, the longest of which is 20 minutes long and covers the conversion of St. Paul and is for four soloists: Historicus (narrator), tenor; St. Paul, tenor; Voice from Heaven, bass; and ananias, tenor. There is also a four-part chorus to represent any crowds in the drama. The music is often contrapuntal and madrigal-like. Philip Neri’s Congregazione dell’Oratorio featured the singing of spiritual laude. These became more and more popular and were eventually performed in specially built oratories (prayer halls) by professional musicians. Again, these were chiefly based on dramatic and narrative elements. Sacred opera provided another impetus for dialogues, and they greatly expanded in length (although never really beyond sixty minutes long). Cavalieri’s Rappresentatione di Anima, et di Corpo is an example of one of these works, but technically it is not an oratorio because it features acting and dancing. It does, however contain music in the monodic style. The first oratorio to be called by that name is Pietro della Valle’s Oratorio della Purificazione, but due to its brevity (only twelve minutes long) and the fact that its other name was “dialogue,” we can see that there was much ambiguity in these names.

During the second half of the seventeenth century, there were trends toward the secularization of the religious oratorio. Evidence of this lies in its regular performance outside church halls in courts and public theaters. Whether religious or secular, the theme of an oratorio is meant to be weighty. It could include such topics as Creation, the life of Jesus, or the career of a classical hero or Biblical prophet. Other changes eventually took place as well, possibly because most composers of oratorios were also popular composers of operas. They began to publish the librettos of their oratorios as they did for their operas. Strong emphasis was soon placed on arias while the use of the choir diminished. Female singers became regularly employed, and replaced the male narrator with the use of recitatives.

By the mid-seventeenth century, two types had developed:

Lasting about 30–60 minutes, oratorio volgares were performed in two sections, separated by a sermon; their music resembles that of contemporary operas and chamber cantatas.

The most significant composer of oratorio latino was Giacomo Carissimi, whose Jephte is regarded as the first masterpiece of the genre. Like most other Latin oratorios of the period, it is in one section only.

In the late baroque oratorios increasingly became “sacred opera.” In Rome and Naples Alessandro Scarlatti was the most noted composer. In Vienna the court poet Metastasio produced annually a series of oratorios for the court which were set by Caldara, Hasse and others. Metastasio’s best known oratorio libretto La passione di Gesù Cristo was set by at least thirty-five composers from 1730–90. In Germany the middle baroque oratorios moved from the early-baroque Historia style Christmas and Resurrection settings of Heinrich Schütz, to the Passions of J. S. Bach, oratorio-passions such as Der Tod Jesu set by Telemann and Carl Heinrich Graun. After Telemann came the galante oratorio style of C. P. E. Bach.

The Oratorio in Georgian Britain

The Georgian era saw a German-born monarch and German-born composer define the English oratorio. George Frideric Handel, most famous today for his Messiah, also wrote other oratorios based on themes from Greek and Roman mythology and Biblical topics. He is also credited with writing the first English language oratorio, Esther. Handel’s imitators included the Italian Lidarti who was employed by the Amsterdam Jewish community to compose a Hebrew version of Esther.

Britain continued to look to Germany for its composers of oratorio. The Birmingham Festival commissioned various oratorios including Felix Mendelssohn’s Elijah in 1846, later performed in German as Elias. German composer Georg Vierling is noted for modernizing the secular oratorio form.

John Stainer’s The Crucifixion (1887) became the stereotypical battle horse of massed amateur choral societies. Edward Elgar tried to revive the genre in the first years of the next century.

When Dudley Buck composed his oratorio The Light of Asia in 1886, it became the first in the history of the genre to be based on the life of Buddha. Several late twentieth- and early twenty-first-century oratorios have since been based on Buddha’s life or have incorporated Buddhist texts. These include Somei Satoh’s 1987 Stabat Mater, Dinesh Subasinghe’s 2010 Karuna Nadee, and Jonathan Harvey’s 2011 Weltethos. The twenty-first century also saw a continuation of Christianity-based oratorios with John Adams’s El Niño. Other religions represented include Ilaiyaraaja’s Thiruvasakam (based on the texts of Hindu hymns to Shiva). Secular oratorios composed in the 21st century include Nathan Currier’s Gaian Variations (based on the Gaia hypothesis), Richard Einhorn’s The Origin (based on the writings of Charles Darwin), and Neil Hannon’s To Our Fathers in Distress.