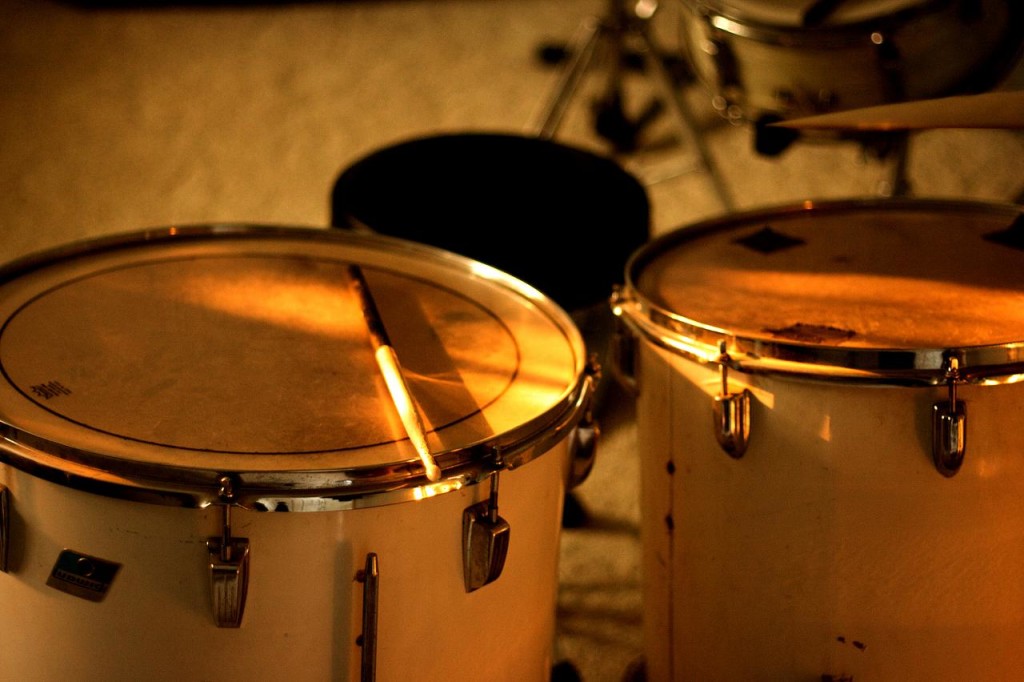 A percussion instrument is a musical instrument that is sounded by being struck or scraped by a beater (including attached or enclosed beaters or rattles); struck, scraped or rubbed by hand; or struck against another similar instrument. The percussion family is believed to include the oldest musical instruments, following the human voice.

Percussion is commonly referred to as “the backbone” or “the heartbeat” of a musical ensemble, often working in close collaboration with bass instruments, when present. In jazz and other popular music ensembles, the pianist, bassist, drummer and sometimes the guitarist are referred to as the rhythm section. Most classical pieces written for full orchestra since the time of Haydn and Mozart are orchestrated to place emphasis on the strings, woodwinds, and brass. However, often at least one pair of timpani is included, though they rarely play continuously. Rather, they serve to provide additional accents when needed. In the eighteenth and nineteenth centuries, other percussion instruments (like the triangle or cymbals) have been used, again generally sparingly. The use of percussion instruments became more frequent in the twentieth-century classical music.

Timpani, or kettledrums, are musical instruments in the percussion family. A type of drum, they consist of a skin called a head stretched over a large bowl traditionally made of copper. They are played by striking the head with a specialized drum stick called a timpani stick or timpani mallet. Timpani evolved from military drums to become a staple of the classical orchestra by the last third of the eighteenth century. Today, they are used in many types of musical ensembles, including concert bands, marching bands, orchestras, and even in some rock.

The basic timpani drum consists of a drumhead stretched across the opening of a bowl typically made of copper or, in less expensive models, fiberglass and sometimes aluminum. In the Sachs–Hornbostel classification, the timpani are thus considered membranophones. The drumhead is affixed to a hoop (also called a fleshhoop), which in turn is held onto the bowl by a counterhoop,which is then held by means of a number of tuning screws called tension rods placed regularly around the circumference. The head’s tension can be adjusted by loosening or tightening the rods. Most timpani have six to eight tension rods. 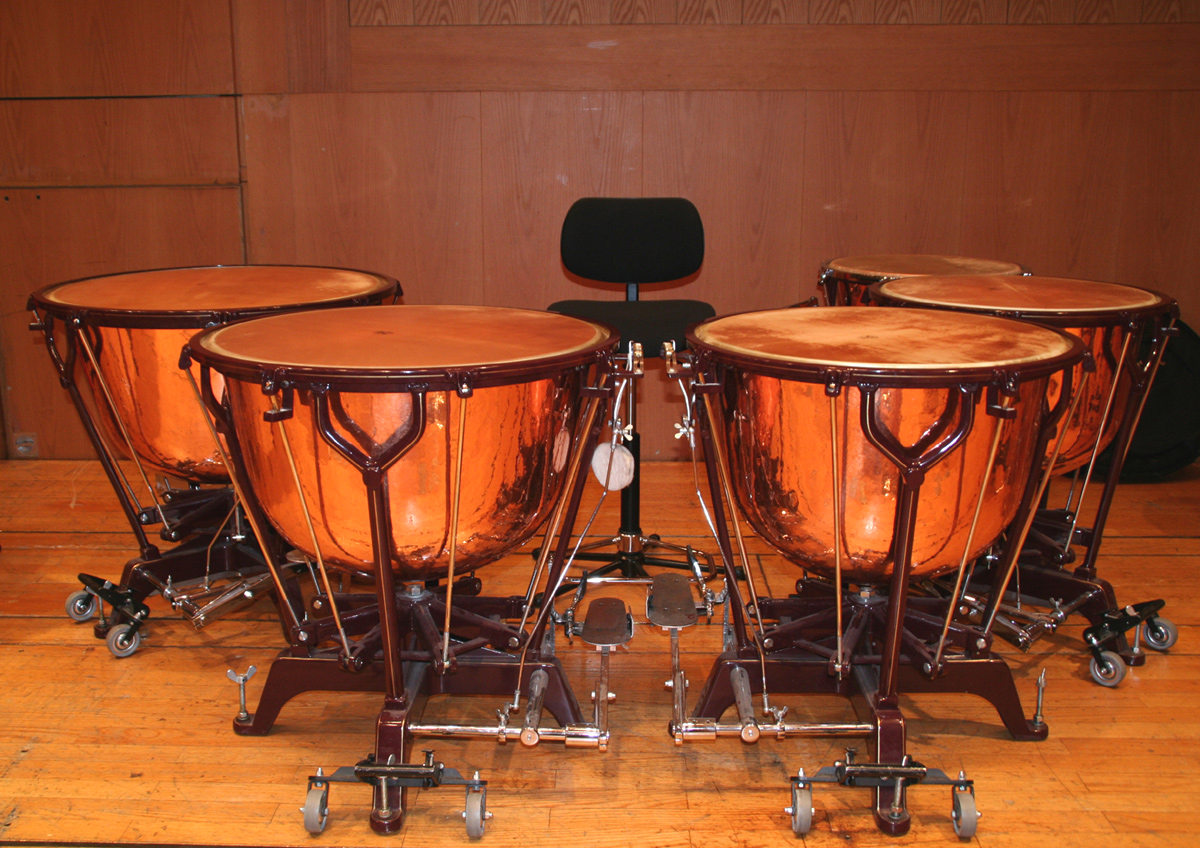 The shape of the bowl contributes to the quality of the drum. For example, hemispheric bowls produce brighter tones while parabolic bowls produce darker tones. Another factor that affects the timbre of the drum is the quality of the bowl’s surface. Copper bowls may have a smooth, machined surface or a rough surface with many small dents hammered into it.

Timpani come in a variety of sizes from about 84 centimeters (33 inches) in diameter down to piccoli timpani of 30 centimeters (12 inches) or less. A 33-inch drum can produce the C below the bass clef, and specialty piccoli timpani can play up into the treble clef. In Darius Milhaud’s 1923 ballet score La création du monde, the timpanist must play the F sharp at the bottom of the treble clef. Each individual drum typically has a range of a perfect fifth.

Please listen to the timpani’s role in Carmina Burana, Part 1, as played by the Raleigh Symphony Orchestra.

Bass drums are percussion instruments which vary in size and are used in several musical genres. Three major types of bass drums are as follows:

A bass drum is typically cylindrical with the diameter much greater than the height. There is normally a struck head at both ends of the cylinder. The heads may be made of calf skin or plastic. There is normally a means of adjusting the tension either by threaded taps or by strings. Bass drums are built in a variety of sizes, but size has little to do with the volume produced by the drum. The size chosen being based on convenience and aesthetics.

In the following video, Kristen Shiner McGuire gives an introduction to the concert bass drum.

The snare drum or side drum is a ubiquitous percussion instrument known for its cylindrical shape and powerful, staccato sound. Snare drums are often used in orchestras, concert bands, marching bands, parades, drum lines, drum corps, and more. The snare is also one of the central pieces in a trap set, a collection of percussion instruments designed to be played by a seated drummer, which is used in many popular genres of music. Snare drums are typically played with drum sticks, although there are other options for a completely different sound, such as the brush. 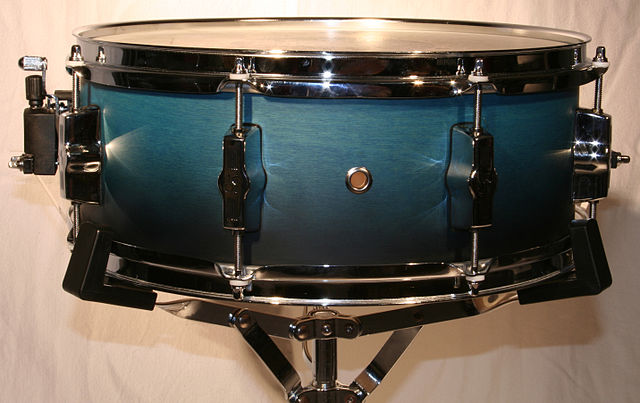 The snare drum originated from the Tabor drum, which was originally used to accompany the flute. It has evolved into more modern versions including the kit snare, marching snare, and the piccolo snare. Each type presents a different dimension and style of percussion. The snare drum that someone might see in a concert is typically used with a backbeat style to create rhythm. In marching bands it can do the same technique but it is mostly used for a front beat.

In comparison with the marching snare, the kit snare is typically smaller in length between the two heads, while the piccolo is the smallest of the three. The snare drum is known for its loud crack when a person strikes it with a drum stick or mallet. The depth of the sound varies from snare to snare because of the different techniques and construction qualities of the drum. Some of these qualities include tightness of the head, dimensions, and brand.

The snare drum is constructed of two heads—both typically made of plastic—along with a rattle of metal wires on the bottom head called the snares. The wires can also be placed on the top, just like on the Tarol Snare. The top head is typically called the batter head because that is where the drummer strikes it, while the bottom head is called the snare head because that is where the snares are located. Tension of the drum heads is held constant through the tension rods. The ability to tighten them provides an opportunity to differ the sound of the hit. The strainer is a lever that releases and tightens the snare. If the strainer is relaxed, the sound of the snare is more like that of a tom because the snares are not present. The rim is the metal ring around the batter head, which can be used for a variety of things, although it is notably used to sound a piercing rimshot with the drumstick.

The following video gives an overview of playing the snare drum.

Cymbals consist of thin, normally round plates of various alloys. The majority of cymbals are of indefinite pitch, although small disc-shaped cymbals based on ancient designs sound a definite note. Cymbals are used in many ensembles ranging from the orchestra, percussion ensembles, jazz bands, heavy metal bands, and marching groups. Drum kits usually incorporate at least a crash, ride or crash/ride, and a pair of hi-hat cymbals.

The anatomy of the cymbal plays a large part in the sound it creates. A hole is drilled in the center of the cymbal and it is used to either mount the cymbal on a stand or straps (for hand playing). The bell, dome, or cup is the raised section immediately surrounding the hole. The bell produces a higher “pinging” pitch than the rest of the cymbal. The bow is the rest of the surface surrounding the bell. The bow is sometimes described in two areas: the ride and crash area. The ride area is the thicker section closer to the bell while the crash area is the thinner tapering section near the edge. The edge or rim is the immediate circumference of the cymbal. 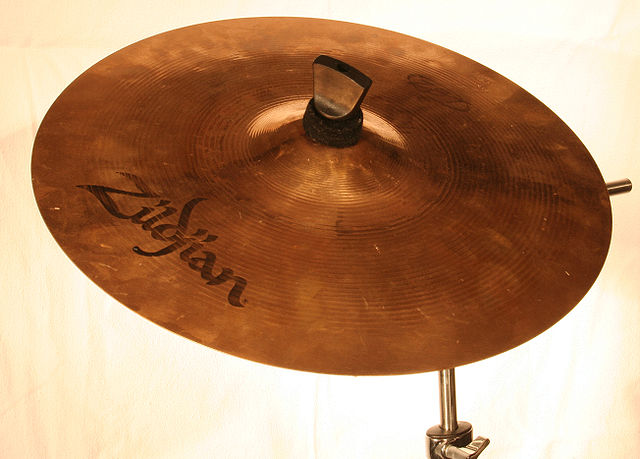 Cymbals are measured by their diameter often in inches or centimeters. The size of the cymbal affects its sound, larger cymbals usually being louder and having longer sustain. The weight describes how thick the cymbal is. Cymbal weights are important to the sound they produce and how they play. Heavier cymbals have a louder volume, more cut, and better stick articulation (when using drum sticks). Thin cymbals have a fuller sound, lower pitch, and faster response.

The following video gives a first lesson in cymbals.

Listen for the role of the cymbals in Mozart’s Overture from The Abduction from the Seraglio as played by Wiener Symphoniker.