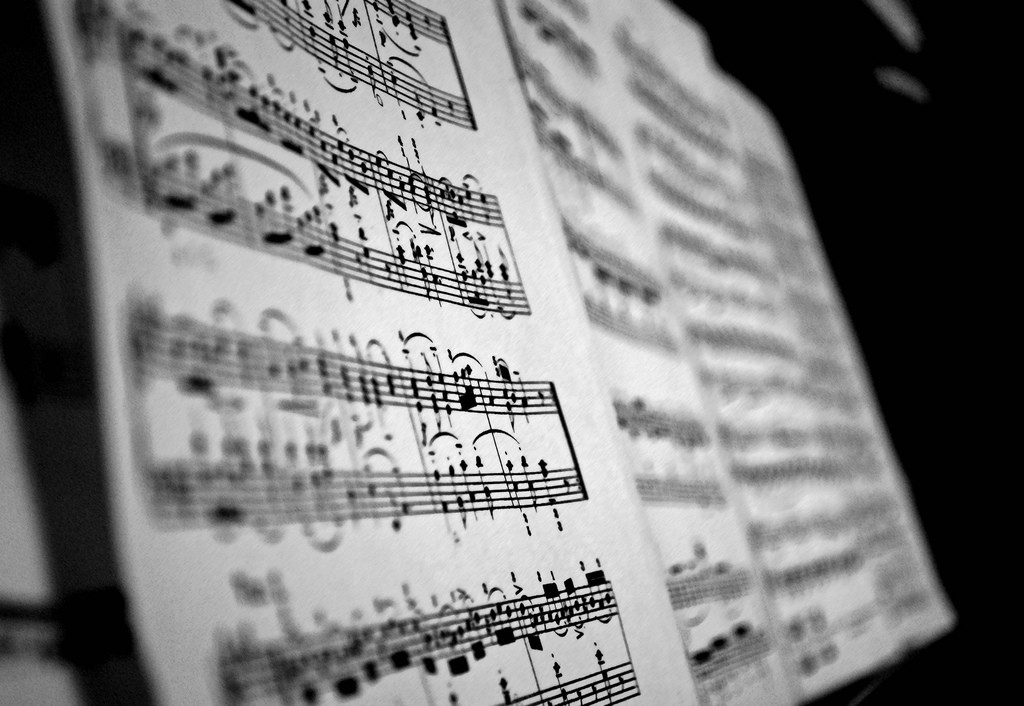 While it is typically used in the first movement of multi-movement pieces, it is sometimes used in subsequent movements as well—particularly the final movement. The teaching of sonata form in music theory rests on a standard definition and a series of hypotheses about the underlying reasons for the durability and variety of the form—a definition that arose in the second quarter of the nineteenth century. There is little disagreement that on the largest level, the form consists of three main sections: an exposition, a development, and a recapitulation; however, beneath this, sonata form is difficult to pin down in a single model.

The standard definition focuses on the thematic and harmonic organization of tonal materials that are presented in an exposition, elaborated and contrasted in a development and then resolved harmonically and thematically in a recapitulation. In addition, the standard definition recognizes that an introduction and a coda may be present. Each of the sections is often further divided or characterized by the particular means by which it accomplishes its function in the form.

Since its establishment, the sonata form became the most common form in the first movement of works entitled “sonata,” as well as other long works of classical music, including the symphony, concerto, string quartet, and so on. Accordingly, there is a large body of theory on what unifies and distinguishes practice in the sonata form, both within eras and between eras. Even works that do not adhere to the standard description of a sonata form often present analogous structures or can be analyzed as elaborations or expansions of the standard description of sonata form.

According to the Grove Dictionary of Music and Musicians, sonata form is “the most important principle of musical form, or formal type, from the classical period well into the twentieth century.” As a formal model it is usually best exemplified in the first movements of multi-movement works from this period, whether orchestral or chamber, and has, thus, been referred to frequently as “first-movement form” or “sonata-allegro form” (since the typical first movement in a three- or four-movement cycle will be in allegro tempo). However, as what Grove, following Charles Rosen, calls a “principle”—a typical approach to shaping a large piece of instrumental music—it can be seen to be active in a much greater variety of pieces and genres, from minuet to concerto to sonata-rondo. It also carries with it expressive and stylistic connotations: “sonata style,” for Donald Tovey as for other theorists of his time, was characterized by drama, dynamism, and a “psychological” approach to theme and expression.

Although the Italian term sonata often refers to a piece in sonata form, it is essential to separate the two. As the title for a single-movement piece of instrumental music—the past participle of suonare, “to sound,” as opposed to cantata, the past participle of cantare, “to sing”—”sonata” covers many pieces from the baroque and mid-eighteenth century that are not “in sonata form.” Conversely, in the late eighteenth century or “classical” period, the title “sonata” is typically given to a work composed of three or four movements. Nonetheless, this multi-movement sequence is not what is meant by sonata form, which refers to the structure of an individual movement.

The definition of sonata form in terms of musical elements sits uneasily between two historical eras. Although the late eighteenth century witnessed the most exemplary achievements in the form, above all from Joseph Haydn and Wolfgang Amadeus Mozart, compositional theory of the time did not use the term “sonata form”. Perhaps the most extensive contemporary description of the sonata-form type of movement may have been given by the theorist H. C. Koch in 1793: like earlier German theorists and unlike many of the descriptions of the form we are used to today, he defined it in terms of the movement’s plan of modulation and principal cadences, without saying a great deal about the treatment of themes. Seen in this way, sonata form was closest to binary form, out of which it probably developed. The model of the form that is often taught currently tends to be more thematically differentiated. It was originally promulgated by Anton Reicha in Traité de haute composition musicale in 1826, by Adolf Bernhard Marx in Die Lehre von der musikalischen Komposition in 1845, and by Carl Czerny in 1848. Marx may be the originator of the term “sonata form.”

This model was derived from study and criticism of Beethoven’s piano sonatas.

Definition As a Formal Model

A sonata-allegro movement is divided into sections. Each section is felt to perform specific functions in the musical argument.

It may begin with an introduction, which is, in general, slower than the main movement. In terms of structure, introductions are an upbeat before the main musical argument.

The exposition is followed by the development where the harmonic and textural possibilities of the thematic material are explored.

The movement may conclude with a coda, beyond the final cadence of the recapitulation.

The term ‘sonata form’ is controversial and has been called misleading by scholars and composers almost from its inception. Its originators implied that there was a set template to which classical and Romantic composers aspired, or should aspire.

However, sonata form is presently viewed as a model for musical analysis, rather than compositional practice. Although the descriptions on this page could be considered an adequate analysis of many first-movement structures, there are enough variations that theorists such as Charles Rosen have felt them to warrant the plural in “sonata forms.”

These variations include, but are not limited to:

Through the Romantic period, formal distortions and variations become so widespread (Mahler, Elgar and Sibelius among others are cited and studied by James Hepokoski) that ‘sonata form’ as it is outlined here is not adequate to describe the complex musical structures that it is often applied to.

In the context of the many late-baroque extended binary forms that bear similarities to sonata form, sonata form can be distinguished by the following three characteristics:

The Introduction section is optional, or may be reduced to a minimum. If it is extended, it is, in general, slower than the main section, and frequently focuses on the dominant key. It may or may not contain material that is later stated in the exposition. The introduction increases the weight of the movement, and also permits the composer to begin the exposition with a theme that would be too light to start on its own, as in Haydn’s Symphony No. 103 (“The Drumroll”) and Beethoven’s Quintet for Piano and Winds Op. 16. The introduction usually is not included in the exposition repeat.

On occasion, the material of introduction reappears in its original tempo later in the movement. Often, this occurs as late as the coda, as in Mozart’s String Quintet in D major K. 593, Haydn’s “Drumroll” Symphony, or Beethoven’s Piano Sonata No. 8 (“Pathétique”).

The primary thematic material for the movement is presented in the Exposition. This section can be further divided into several sections. The same section in most sonata form movements has prominent harmonic and thematic parallelisms (although in some works from the nineteenth century and onward, some of these parallelisms are subject to considerable exceptions), which include:

In general, the development starts in the same key as the exposition ended, and may move through many different keys during its course. It will usually consist of one or more themes from the exposition altered and on occasion juxtaposed and may include new material or themes – though exactly what is acceptable practice is a point of contention. Alterations include taking material through distant keys, breaking down of themes and sequencing of motifs, and so forth.

The development varies greatly in length from piece to piece and from time period to time period, sometimes being relatively short compared to the exposition (e.g., the first movement of Eine kleine Nachtmusik, K 525/i by Mozart) and in other cases quite long and detailed (e.g., the first movement of the “Eroica” Symphony by Beethoven). Developments in the classical era are typically shorter due to how much composers of that era valued symmetry, unlike the more expressive romantic era in which development sections gain a much greater importance. However, it almost always shows a greater degree of tonal, harmonic, and rhythmic instability than the other sections. In a few cases, usually in late classical and early romantic concertos, the development section consists of or ends with another exposition, often in the relative minor of the tonic key.

The last part of the development section is called the retransition: It prepares for the return of the first subject group in the tonic, most often through a grand prolongation of the dominant seventh. In addition, the character of the music would signal such a return.

Exceptions include the first movement of Brahms’s Piano Sonata No. 1, Op. 1. The general key of the movement is C major, and it would then follow that the retransition should stress the dominant seventh chord on G. Instead, it builds in strength over the dominant seventh chord on C, as if the music were proceeding to F major, only to take up immediately the first theme in C major.

Occasionally, the retransition can begin with a false recapitulation, in which the opening material of the first theme group is presented in a key other than the tonic. The surprise that ensues when the music continues to modulate toward the tonic can be used for either comic or dramatic effect.

The recapitulation is an altered repeat of the exposition, and consists of

Exceptions to the recapitulation form include Mozart and Haydn works that often begin with the second subject group when the first subject group has been elaborated at length in the development.

After the closing cadence, the musical argument proper is said to be completed. If the movement continues, it is said to have a coda.

The Coda is optional. After the final cadence of the recapitulation, the movement may continue with a coda which will contain material from the movement proper. Codas, when present, vary considerably in length, but like introductions are not part of the “argument” of the work. The coda will end, however, with a perfect authentic cadence in the original key. Codas may be quite brief tailpieces, or they may be very long and elaborate. An example of the more extended type is the coda to the first movement of Beethoven’s Eroica Symphony.

Explanations for why an extended coda is present vary. One reason may be to omit the repeat of the development and recapitulation sections found in earlier sonata forms of the eighteenth century. Indeed, Beethoven’s extended codas often serve the purpose of further development of thematic material. Another role that these codas sometimes serve is to return to the minor mode in minor-key movements where the recapitulation proper concludes in the parallel major, as in the first movements of Beethoven’s 5th Symphony or Schumann’s Piano Concerto – or, rarely, to restore the home key after an off-tonic recapitulation, such as in the first movements of Brahms’ Clarinet Quintet and Dvorak’s Symphony No. 9.