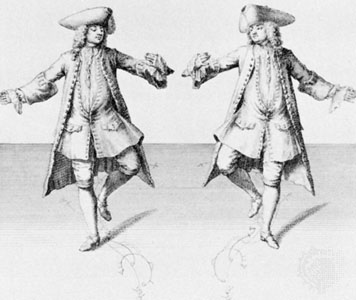 A step from the chaconne dance. Engraving by H. Fletcher, 1735.

A chaconne (Spanish: chacona; Italian: ciaccona) is a type of musical composition popular in the baroque era when it was much used as a vehicle for variation on a repeated short harmonic progression, often involving a fairly short repetitive bass line (ground bass) that offered a compositional outline for variation, decoration, figuration, and melodic invention. In that way it closely resembles the passacaglia (see below).

The ground bass, if there is one, may typically descend stepwise from the tonic to the dominant pitch of the scale; the harmonies given to the upper parts may emphasize the circle of fifths or a derivative pattern thereof.

Though it originally emerged during the late sixteenth century in Spanish culture—having reputedly been introduced from the New World as a quick dance-song characterized by suggestive movements and mocking texts—by the early eighteenth century the chaconne had evolved into a slow triple-meter instrumental form.

One of the best known and most masterful and expressive examples of the chaconne is the final movement from the Violin Partita in D minor by Johann Sebastian Bach. This 256-measure chaconne takes a plaintive four-bar phrase through a continuous kaleidoscope of musical expression in both major and minor modes.

After the baroque period, the chaconne fell into decline during the 19th century, though the 32 Variations in C minor by Beethoven suggest its continuing influence.

Please listen to the following example of a chaconne, with the score (second link):

J. S. Bach, Chaconne in D Minor, from Partita No. 2 for Violin Solo.

Musical score for the Chaconne in D Minor

The passacaglia is a musical form that originated in early seventeenth-century Spain and is still used today by composers. It is usually of a serious character and is often, but not always, based on a bass-ostinato and written in triple meter.

The term passacaglia derives from the Spanish pasar (to walk) and calle (street). It originated in early seventeenth-century Spain as a strummed interlude between instrumentally accompanied dances or songs. Despite the form’s Spanish roots (confirmed by references in Spanish literature of the period), the first written examples of passacaglias are found in an Italian source dated 1606. These pieces, as well as others from Italian sources from the beginning of the century, are simple, brief sequences of chords outlining a cadential formula.

The passacaglia was redefined in the late 1620s by Italian composer Girolamo Frescobaldi, who transformed it into a series of continuous variations over a bass (which itself may be varied). Later composers adopted this model, and by the nineteenth century the word came to mean a series of variations over an ostinato pattern, usually of a serious character. A similar form, the chaconne, was also first developed by Frescobaldi. The two genres are closely related, but since “composers often used the terms chaconne and passacaglia indiscriminately […] modern attempts to arrive at a clear distinction are arbitrary and historically unfounded.” In early scholarship, attempts to formally differentiate between the historical chaconne and passacaglia were made, but researchers often came to opposite conclusions. For example, Percy Goetschius held that the chaconne is usually based on a harmonic sequence with a recurring soprano melody, and the passacaglia was formed over a ground bass pattern, whereas Clarence Lucas defined the two forms in precisely the opposite way. More recently, however, some progress has been made toward making a useful distinction for the usage of the seventeenth and early eighteenth centuries, when some composers (notably Frescobaldi and François Couperin) deliberately mixed the two genres in the same composition.

Please listen to the following example of a passacaglia:

La folía (Spanish), also folies d’Espagne (French), follies of Spain (English) or Follia (Italian), is one of the oldest remembered European musical themes, or primary material, generally melodic, of a composition, on record. The theme exists in two versions, referred to as early and late folias, the earlier being faster.

The epithet “folia” has several meanings in music.

Western classical music features both an “early folia,” which can take different shapes, and the better-known “later folia.” Recent research suggests that the origin of the folia framework lies in the application of a specific compositional and improvisational method to simple melodies in minor mode. Thus, the essence of the “early folia” was not a specific theme or a fixed sequence of chords but rather a compositional-improvisational process which could generate these sequences of chords. The “later folia” is a standard chord progression (i-V-i-VII / III-VII-[i or VI]-V / i-V-i-VII / III-VII-[i or VI7]-V[4-3sus]-i) and usually features a standard or “stock” melody line, a slow sarabande in triple meter, as its initial theme. This theme generally appears at the start and end of a given “folia” composition, serving as “bookends” for a set of variations within which both the melodic line and even the meter may vary. In turn, written variations on the “later folia” may give way to sections consisting of partial or pure improvisation similar to those frequently encountered in the twelve-bar blues that rose to prominence in the twentieth century.

Over the course of three centuries, more than 150 composers have used it in their works. The first publications of this theme date from the middle of the 17th century, but it is probably much older. Plays of the Renaissance theatre in Portugal, including works by Gil Vicente, mention the folia as a dance performed by shepherds or peasants. The Portuguese origin is recorded in the 1577 treatise De musica libri septem by Francisco de Salinas.

Jean-Baptiste Lully, along with Philidor l’aîné in 1672, Arcangelo Corelli in 1700, Marin Marais in 1701, Alessandro Scarlatti in 1710, Antonio Vivaldi in his Opus 1 No. 12 of 1705, Francesco Geminiani in his Concerto Grosso No. 12 (which was, in fact, part of a collection of direct transcriptions of Corelli’s violin sonatas), George Frideric Handel in the Sarabande of his Keyboard Suite in D minor HWV 437 of 1727, and Johann Sebastian Bach in his Peasants’ Cantata of 1742 are considered to highlight this “later” folia repeating theme in a brilliant way. CPE Bach composed a set of twelve variations for keyboard on the tune (H.263). Antonio Salieri’s 26 Variations on La Folia, for orchestra, written toward the end of his career, is one of his finest works.

Please listen to A. Corelli’s La Follia from Violin Sonata no. 12, op. 5, below: