Axial Muscles of the Abdominal Wall and Thorax

It is a complex job to balance the body on two feet and walk upright. The muscles of the vertebral column, thorax, and abdominal wall extend, flex, and stabilize different parts of the body’s trunk. The deep muscles of the core of the body help maintain posture as well as carry out other functions. The brain sends out electrical impulses to these various muscle groups to control posture by alternate contraction and relaxation. This is necessary so that no single muscle group becomes fatigued too quickly. If any one group fails to function, body posture will be compromised.

Muscles of the Abdomen 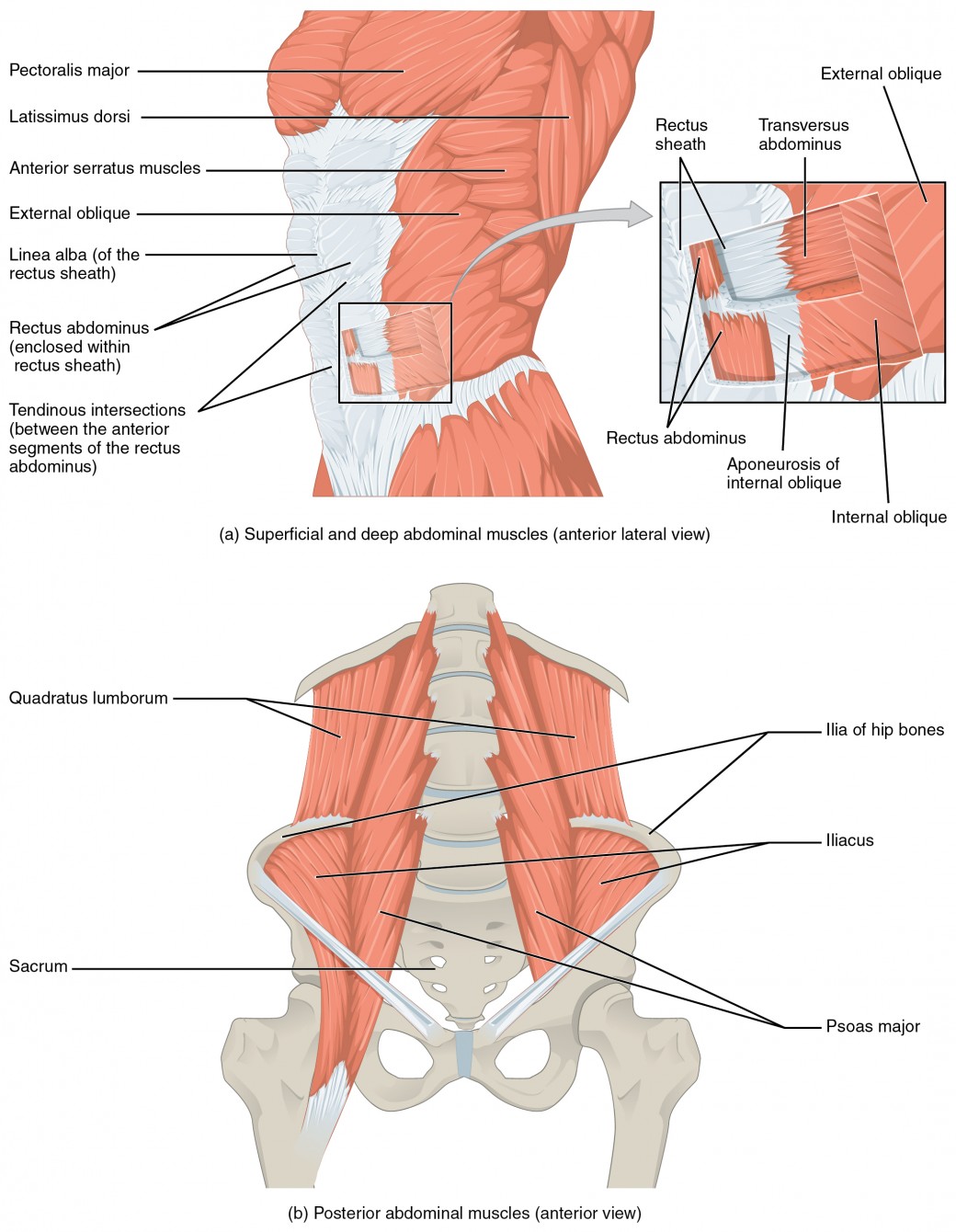 Figure 7.23. Muscles of the Abdomen
(a) The anterior abdominal muscles include the medially located rectus femoris, which is covered by a sheet of connective tissue called the linea alba. On the flanks of the body, medial to the rectus femoris, the abdominal wall is composed of three layers. The external oblique muscles form the outermost layer, while the internal oblique muscles form the middle layer, and the transverses abdominus forms the innermost layer. (b) The muscles of the lower back move the lumbar spine but also assist in femur movements.
There are three flat skeletal muscles in the antero-lateral wall of the abdomen. The external oblique, closest to the surface, extend inferiorly and medially, in the direction of sliding one’s four fingers into pants pockets. Perpendicular to it is the intermediate internal oblique, extending superiorly and medially, the direction the thumbs usually go when the other fingers are in the pants pocket. The deep muscle, the transversus abdominis, is arranged transversely around the abdomen, similar to the front of a belt on a pair of pants. This arrangement of three bands of muscles in different orientations allows various movements and rotations of the trunk. The three layers of muscle also help to protect the internal abdominal organs in an area where there is no bone.

The linea alba is a white, fibrous band that is made of the bilateral rectus sheaths that join at the anterior midline of the body. These enclose the rectus abdominis muscles (a pair of long, linear muscles, commonly called the “sit-up” muscles) that originate at the pubic crest and symphysis, and extend the length of the body’s trunk. Each muscle is segmented by three transverse bands of collagen fibers called the tendinous intersections. This results in the look of “six-pack abs,” as each segment hypertrophies on individuals at the gym who do many sit-ups.

The posterior abdominal wall is formed by the lumbar vertebrae, parts of the ilia of the hip bones, psoas major and iliacus muscles, and quadratus lumborum muscle. This part of the core plays a key role in stabilizing the rest of the body and maintaining posture.

Those who have a muscle or joint injury will most likely be sent to a physical therapist (PT) after seeing their regular doctor. PTs have a master’s degree or doctorate, and are highly trained experts in the mechanics of body movements. Many PTs also specialize in sports injuries.

If you injured your shoulder while you were kayaking, the first thing a physical therapist would do during your first visit is to assess the functionality of the joint. The range of motion of a particular joint refers to the normal movements the joint performs. The PT will ask you to abduct and adduct, circumduct, and flex and extend the arm. The PT will note the shoulder’s degree of function, and based on the assessment of the injury, will create an appropriate physical therapy plan.

The first step in physical therapy will probably be applying a heat pack to the injured site, which acts much like a warm-up to draw blood to the area, to enhance healing. You will be instructed to do a series of exercises to continue the therapy at home, followed by icing, to decrease inflammation and swelling, which will continue for several weeks. When physical therapy is complete, the PT will do an exit exam and send a detailed report on the improved range of motion and return of normal limb function to your doctor. Gradually, as the injury heals, the shoulder will begin to function correctly. A PT works closely with patients to help them get back to their normal level of physical activity.

Muscles of the Thorax 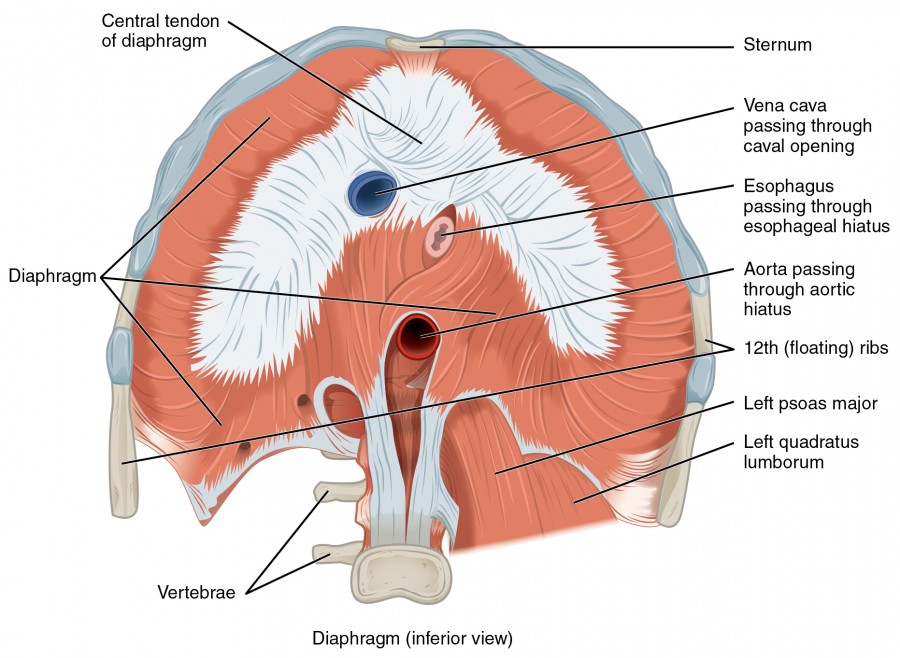 Figure 7.24. Muscles of the Diaphragm
The diaphragm separates the thoracic and abdominal cavities.

Defecating, urination, and even childbirth involve cooperation between the diaphragm and abdominal muscles (this cooperation is referred to as the “Valsalva maneuver”). You hold your breath by a steady contraction of the diaphragm; this stabilizes the volume and pressure of the peritoneal cavity. When the abdominal muscles contract, the pressure cannot push the diaphragm up, so it increases pressure on the intestinal tract (defecation), urinary tract (urination), or reproductive tract (childbirth).

The inferior surface of the pericardial sac and the inferior surfaces of the pleural membranes (parietal pleura) fuse onto the central tendon of the diaphragm. To the sides of the tendon are the skeletal muscle portions of the diaphragm, which insert into the tendon while having a number of origins including the xiphoid process of the sternum anteriorly, the inferior six ribs and their cartilages laterally, and the lumbar vertebrae and 12th ribs posteriorly.

The diaphragm also includes three openings for the passage of structures between the thorax and the abdomen. The inferior vena cava passes through the caval opening, and the esophagus and attached nerves pass through the esophageal hiatus. The aorta, thoracic duct, and azygous vein pass through the aortic hiatus of the posterior diaphragm. 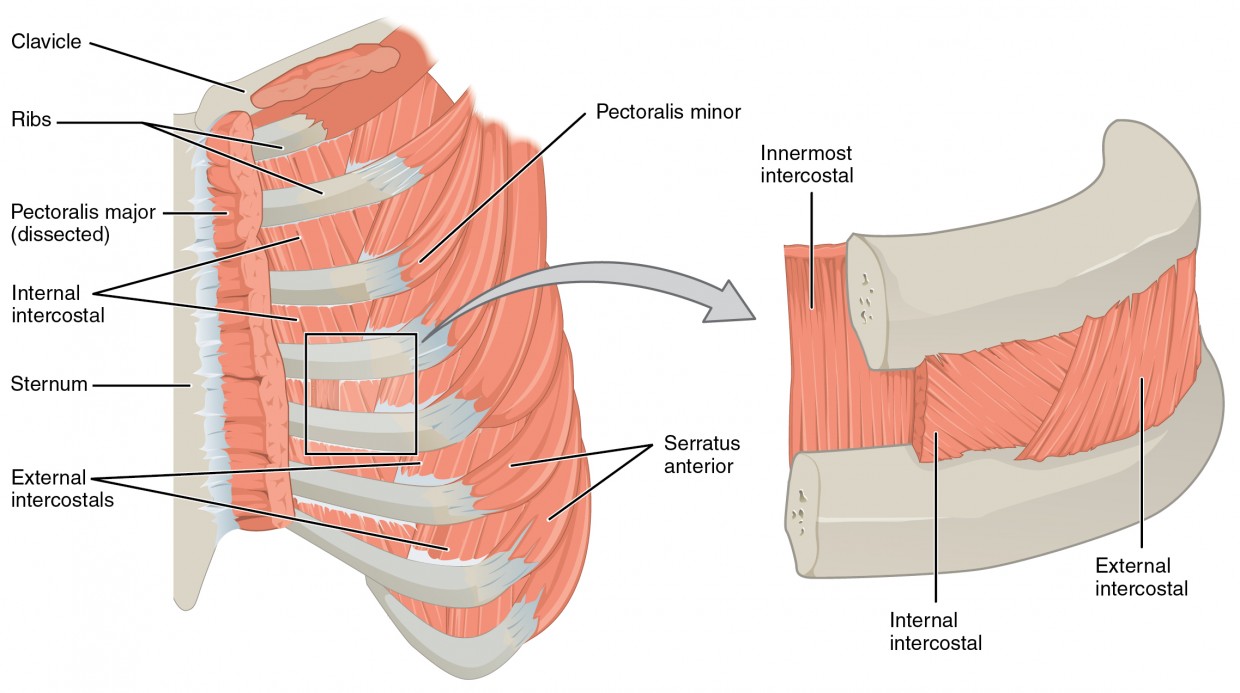