All matter in the natural world is composed of one or more of the 92 fundamental substances called elements. An element is a pure substance that is distinguished from all other matter by the fact that it cannot be created or broken down by ordinary chemical means. While your body can assemble many of the chemical compounds needed for life from their constituent elements, it cannot make elements. They must come from the environment. A familiar example of an element that you must take in is calcium (Ca++). Calcium is essential to the human body; it is absorbed and used for a number of processes, such as muscle contractions, nerve impulse conduction, blood clotting, and strengthening bones. When you consume dairy products your digestive system breaks down the food into components small enough to cross into the bloodstream. Among these is calcium, which, because it is an element, cannot be broken down further. The elemental calcium in cheese, therefore, is the same as the calcium that forms your bones. Some other elements you might be familiar with are oxygen, sodium, and iron. The elements in the human body are shown in Figure 2.2, beginning with the most abundant.  The most abundant elements are referred to as major elements and include: oxygen (O), carbon (C), hydrogen (H), and nitrogen (N). Each element’s name can be replaced by a one- or two-letter symbol; you will become familiar with some of these during this course. All the elements in your body are derived from the foods you eat and the air you breathe. 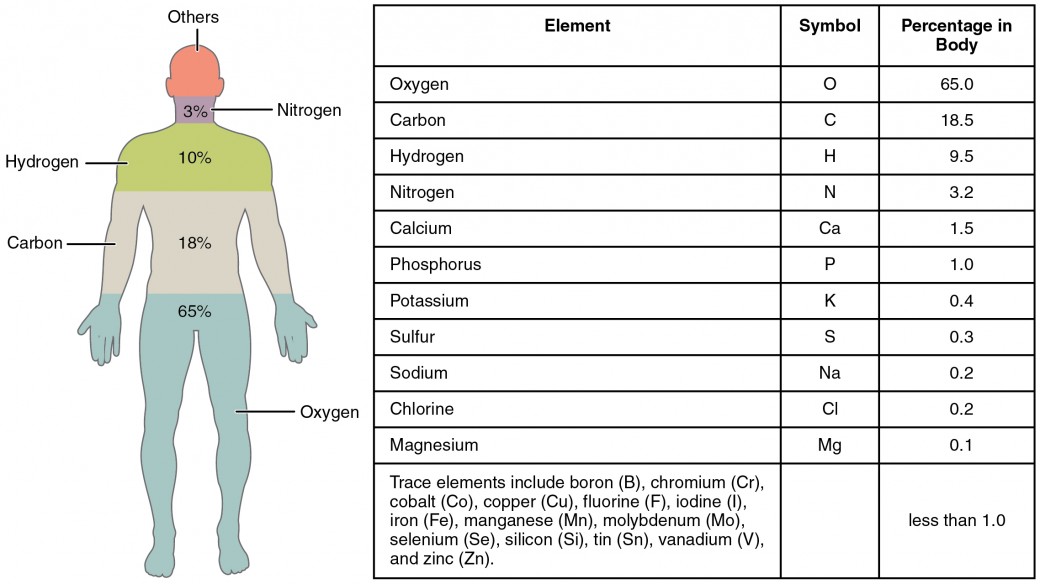 Figure 2.2. Elements of the Human Body
The main elements that compose the human body are shown from most abundant to least abundant.

In nature, elements rarely occur alone. Instead, they combine to form compounds. A compound is a substance composed of two or more different elements joined by chemical bonds. For example, the compound glucose is an important body fuel. It is composed of the elements: carbon, hydrogen, and oxygen.  The elements that make up any given compound always occur in the same relative amounts. In glucose, there are always six carbon and six oxygen units for every twelve hydrogen units. But what, exactly, are these “units” of elements?

An atom is the smallest quantity of an element that retains the unique properties of that element. In other words, an atom of hydrogen is a unit of hydrogen—the smallest amount of hydrogen that can exist. As you might guess, atoms are almost unfathomably small. The period at the end of this sentence is millions of atoms wide.

Figure 2.3 shows two models that can help you imagine the structure of an atom—in this case, helium (He). In the planetary model, helium’s two electrons are shown circling the nucleus in a fixed orbit depicted as a ring. Although this model is helpful in visualizing atomic structure, in reality, electrons do not travel in fixed orbits, but whiz around the nucleus erratically in a so-called electron cloud. 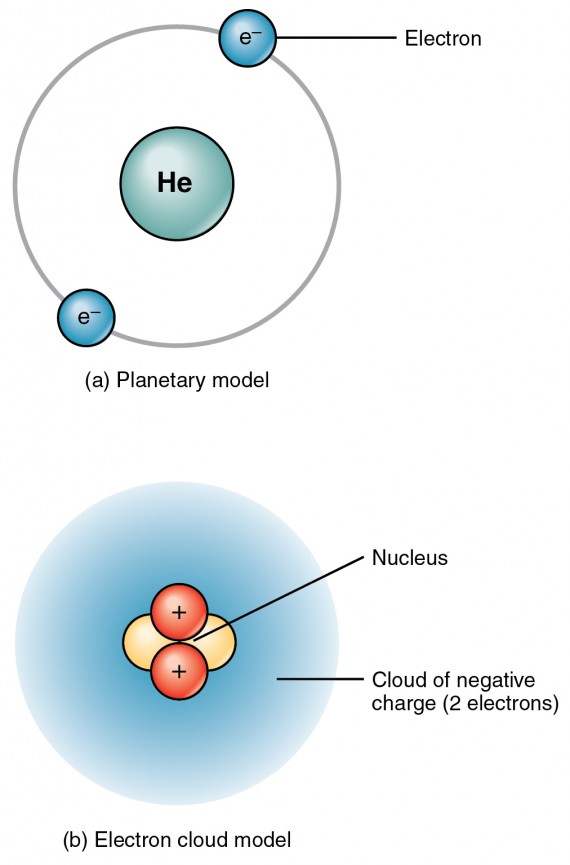 An atom’s protons and electrons carry electrical charges. Protons, with their positive charge, are designated p+. Electrons, which have a negative charge, are designated e–. An atom’s neutrons have no charge: they are electrically neutral. Just as a magnet sticks to a steel refrigerator because their opposite charges attract, the positively charged protons attract the negatively charged electrons. This mutual attraction gives the atom some structural stability. The attraction by the positively charged nucleus helps keep electrons from straying far. The number of protons and electrons within a neutral atom are equal, thus, the atom’s overall charge is balanced.

An atom of carbon is unique to carbon, but a proton of carbon is not. One proton is the same as another, whether it is found in an atom of carbon, sodium (Na), or iron (Fe). The same is true for neutrons and electrons. So, what gives an element its distinctive properties—what makes carbon so different from sodium or iron? The answer is the unique quantity of protons each contains. Carbon by definition is an element whose atoms contain six protons. No other element has exactly six protons in its atoms. Moreover, all atoms of carbon, whether found in your liver or in a lump of coal, contain six protons. Thus, the atomic number, which is the number of protons in the nucleus of the atom, identifies the element. Because an atom usually has the same number of electrons as protons, the atomic number identifies the usual number of electrons as well.

In their most common form, many elements also contain the same number of neutrons as protons. The most common form of carbon, for example, has six neutrons as well as six protons, for a total of 12 subatomic particles in its nucleus. An element’s mass number is the sum of the number of protons and neutrons in its nucleus. So the most common form of carbon’s mass number is 12. (Electrons have so little mass that they do not appreciably contribute to the mass of an atom.) Carbon is a relatively light element. Uranium (U), in contrast, has a mass number of 238 and is referred to as a heavy metal. Its atomic number is 92 (it has 92 protons) but it contains 146 neutrons; it has the most mass of all the naturally occurring elements.

The periodic table of the elements, shown in Figure 2.4, is a chart identifying the 92 elements found in nature, as well as several larger, unstable elements discovered experimentally. The elements are arranged in order of their atomic number, with hydrogen and helium at the top of the table, and the more massive elements below. The periodic table is a useful device because for each element, it identifies the chemical symbol, the atomic number, and the mass number, while organizing elements according to their likelihood to react with other elements. The number of protons and electrons in an element are equal. The number of protons and neutrons may be equal for some elements, but are not equal for all. 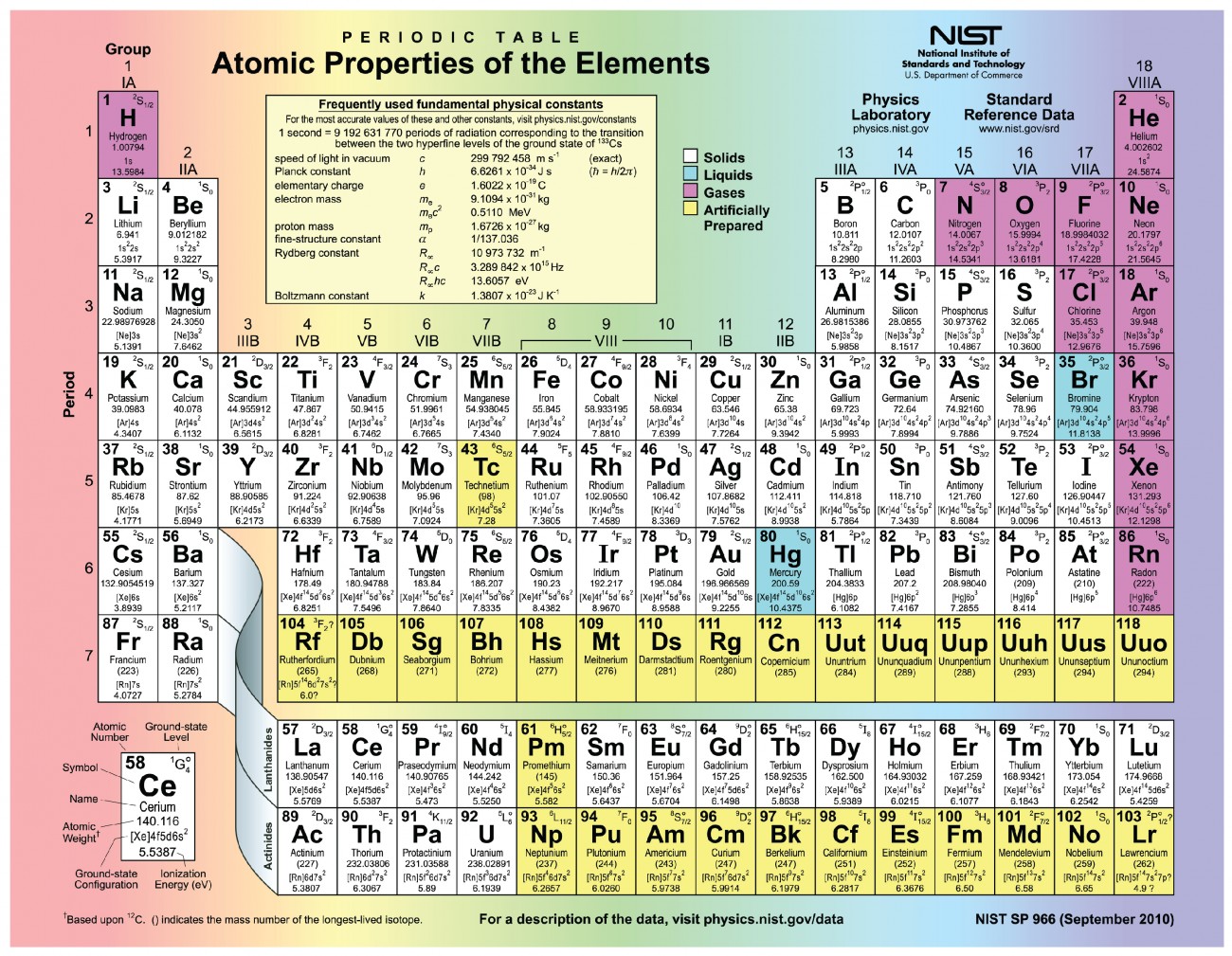 Visit this website to view the periodic table. In the periodic table of the elements, elements in a single group have the same number of electrons that can participate in a chemical reaction. These electrons are known as “valence electrons.” For example, the elements in the first group all have a single valence electron, an electron that can be “donated” in a chemical reaction with another atom. What is the meaning of a mass number shown in parentheses?

Although each element has a unique number of protons, it can exist as different isotopes. An isotope is one of the different forms of an element, distinguished from one another by different numbers of neutrons. The standard isotope of carbon is 12C, commonly called carbon twelve. 12C has six protons and six neutrons, for a mass number of twelve. All of the isotopes of carbon have the same number of protons; therefore, 13C has seven neutrons, and 14C has eight neutrons. The different isotopes of an element can also be indicated with the mass number hyphenated (for example, C-12 instead of 12C). Hydrogen has three common isotopes, shown in Figure 2.5.

The controlled use of radioisotopes has advanced medical diagnosis and treatment of disease. Interventional radiologists are physicians who treat disease by using minimally invasive techniques involving radiation. Many conditions that could once only be treated with a lengthy and traumatic operation can now be treated non-surgically, reducing the cost, pain, length of hospital stay, and recovery time for patients. For example, in the past, the only options for a patient with one or more tumors in the liver were surgery and chemotherapy (the administration of drugs to treat cancer). Some liver tumors, however, are difficult to access surgically, and others could require the surgeon to remove too much of the liver. Moreover, chemotherapy is highly toxic to the liver, and certain tumors do not respond well to it anyway. In some such cases, an interventional radiologist can treat the tumors by disrupting their blood supply, which they need if they are to continue to grow. In this procedure, called radioembolization, the radiologist accesses the liver with a fine needle, threaded through one of the patient’s blood vessels. The radiologist then inserts tiny radioactive “seeds” into the blood vessels that supply the tumors. In the days and weeks following the procedure, the radiation emitted from the seeds destroys the vessels and directly kills the tumor cells in the vicinity of the treatment.

Radioisotopes emit subatomic particles that can be detected and tracked by imaging technologies. One of the most advanced uses of radioisotopes in medicine is the positron emission tomography (PET) scanner, which detects the activity in the body of a very small injection of radioactive glucose, the simple sugar that cells use for energy. The PET camera reveals to the medical team which of the patient’s tissues are taking up the most glucose. Thus, the most metabolically active tissues show up as bright “hot spots” on the images (Figure 2.6). PET can reveal some cancerous masses because cancer cells consume glucose at a high rate to fuel their rapid reproduction. 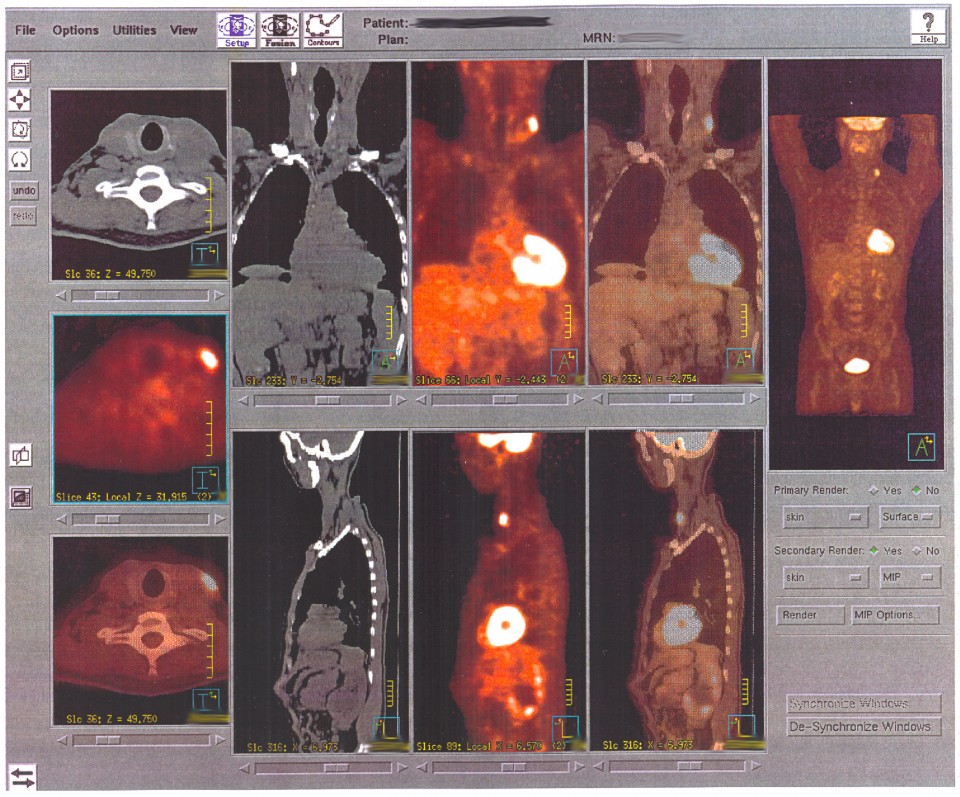 Figure 2.6. PET Scan
PET highlights areas in the body where there is relatively high glucose use, which is characteristic of cancerous tissue. This PET scan shows sites of the spread of a large primary tumor to other sites.

The Behavior of Electrons

In the human body, atoms do not exist as independent entities. Rather, they are constantly reacting with other atoms to form and to break down more complex substances. To fully understand anatomy and physiology you must grasp how atoms participate in such reactions. The key is understanding the behavior of electrons.

Although electrons do not follow rigid orbits a set distance away from the atom’s nucleus, they do tend to stay within certain regions of space called electron shells. An electron shell is a layer of electrons that encircle the nucleus at a distinct energy level.

Lithium (Li), whose atomic number is 3, has three electrons. Two of these fill the first electron shell, and the third spills over into a second shell. The second electron shell can accommodate as many as eight electrons. Carbon, with its six electrons, entirely fills its first shell, and half-fills its second. With ten electrons, neon (Ne) entirely fills its two electron shells. Again, a look at the periodic table reveals that all of the elements in the second row, from lithium to neon, have just two electron shells. Atoms with more than ten electrons require more than two shells. These elements occupy the third and subsequent rows of the periodic table. 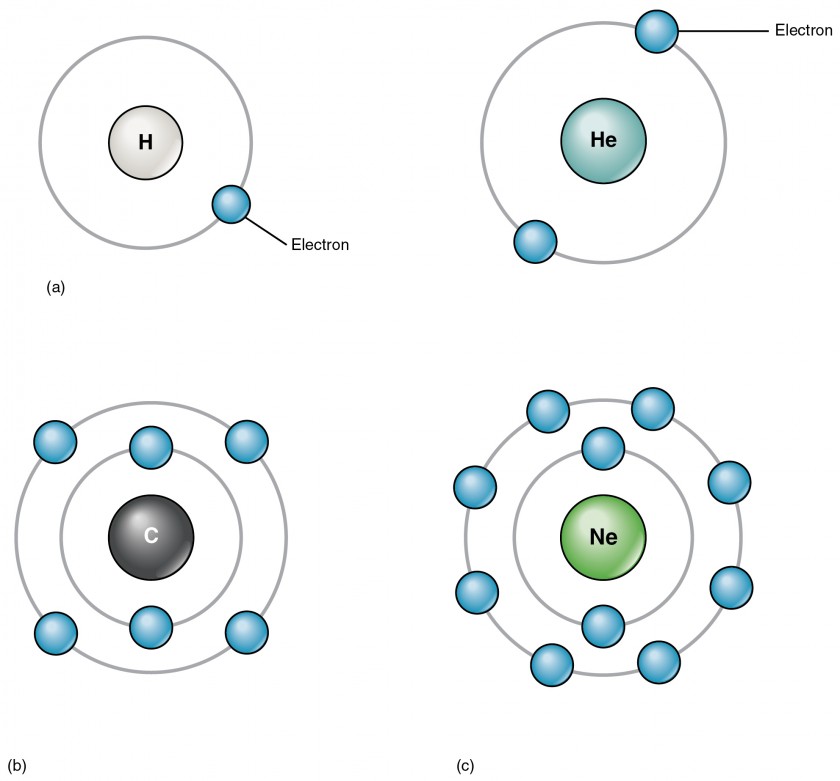 In nature, atoms of one element tend to join with atoms of other elements in characteristic ways. For example, carbon commonly fills its valence shell by linking up with four atoms of hydrogen. In so doing, the two elements form the simplest of organic molecules, methane, which also is one of the most abundant and stable carbon-containing compounds on Earth. As stated above, another example is water; oxygen needs two electrons to fill its valence shell. It commonly interacts with two atoms of hydrogen, forming H2O. Incidentally, the name “hydrogen” reflects its contribution to water (hydro- = “water”; -gen = “maker”). Thus, hydrogen is the “water maker.”