Although you may not typically think of the skin as an organ, it is in fact made of tissues that work together as a single structure to perform unique and critical functions. The skin and its accessory structures make up the integumentary system, which provides the body with overall protection. The skin is made of multiple layers of cells and tissues, which are held to underlying structures by connective tissue (Figure 5.4). The deeper layer of skin is well vascularized (has numerous blood vessels). It also has numerous sensory, and autonomic and sympathetic nerve fibers ensuring communication to and from the brain. 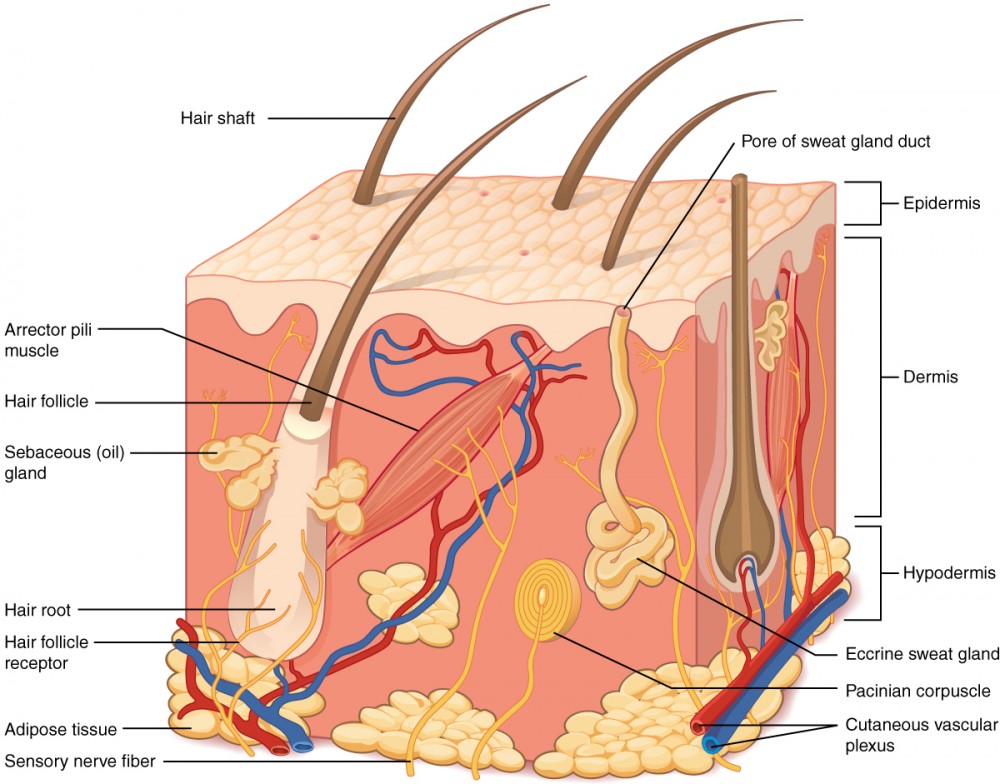 Figure 5.4. Layers of Skin
The skin is composed of two main layers: the epidermis, made of closely packed epithelial cells, and the dermis, made of dense, irregular connective tissue that houses blood vessels, hair follicles, sweat glands, and other structures. Beneath the dermis lies the hypodermis, which is composed mainly of loose connective and fatty tissues.

The skin consists of two main layers and a closely associated layer. View this animation to learn more about layers of the skin. What are the basic functions of each of these layers?

The epidermis is composed of keratinized, stratified squamous epithelium. It is made of four or five layers of epithelial cells, depending on its location in the body. It does not have any blood vessels within it (i.e., it is avascular). Skin that has four layers of cells is referred to as “thin skin.” From deep to superficial, these layers are the stratum basale, stratum spinosum, stratum granulosum, and stratum corneum. Most of the skin can be classified as thin skin. “Thick skin” is found only on the palms of the hands and the soles of the feet. It has a fifth layer, called the stratum lucidum, located between the stratum corneum and the stratum granulosum (Figure 5.5).

The cells in all of the layers except the stratum basale are called keratinocytes. A keratinocyte is a cell that manufactures and stores the protein keratin. Keratin is an intracellular fibrous protein that gives hair, nails, and skin their hardness and water-resistant properties. The keratinocytes in the stratum corneum are dead and regularly slough away, being replaced by cells from the deeper layers. 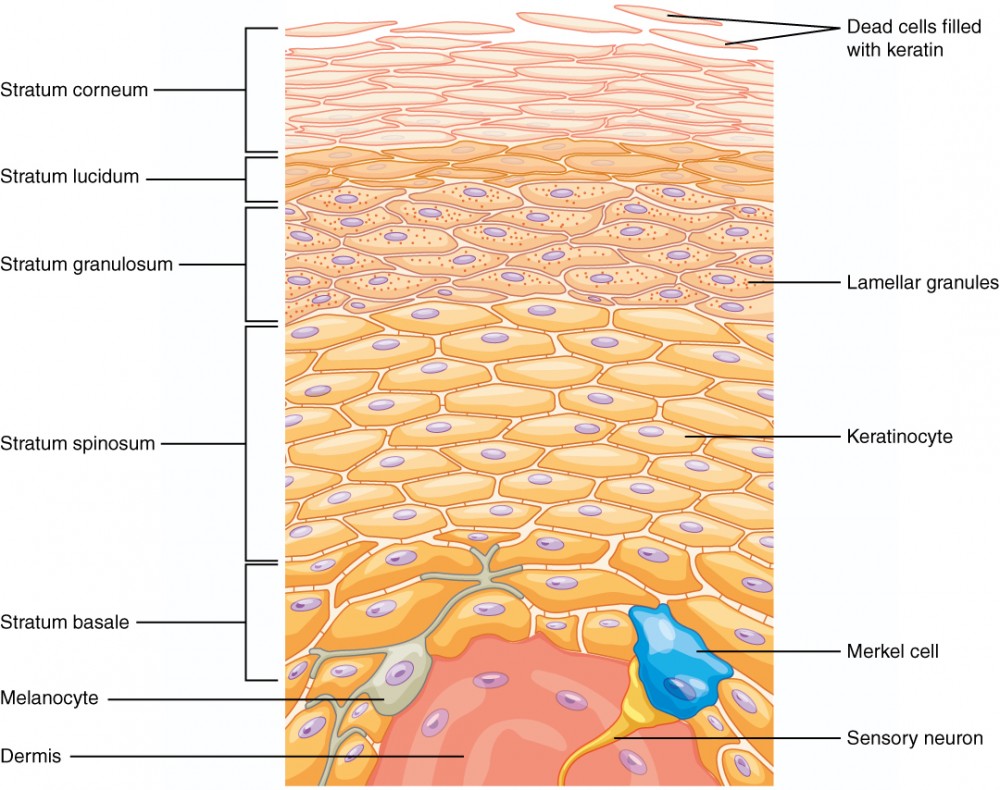 The stratum basale (also called the stratum germinativum) is the deepest epidermal layer and attaches the epidermis to the basal lamina, below which lie the layers of the dermis. The cells in the stratum basale bond to the dermis via intertwining collagen fibers, referred to as the basement membrane. The stratum basale is a single layer of cells primarily made of basal cells. A basal cell is a cuboidal-shaped stem cell that is a precursor of the keratinocytes of the epidermis. All of the keratinocytes are produced from this single layer of cells, which are constantly going through mitosis to produce new cells. As new cells are formed, the existing cells are pushed superficially away from the stratum basale. Two other cell types are found dispersed among the basal cells in the stratum basale. The first is a Merkel cell, which functions as a receptor and is responsible for stimulating sensory nerves that the brain perceives as touch. These cells are especially abundant on the surfaces of the hands and feet. The second is a melanocyte, a cell that produces the pigment melanin. Melanin gives hair and skin its color, and also helps protect the living cells of the epidermis from ultraviolet (UV) radiation damage.

As the name suggests, the stratum spinosum is spiny in appearance due to the protruding cell processes that join the cells via a structure called a desmosome. The desmosomes interlock with each other and strengthen the bond between the cells. It is interesting to note that the “spiny” nature of this layer is an artifact of the staining process. Unstained epidermis samples do not exhibit this characteristic appearance. The stratum spinosum is composed of eight to 10 layers of keratinocytes, formed as a result of cell division in the stratum basale. Interspersed among the keratinocytes of this layer is a type of dendritic cell called the Langerhans cell, which functions as a macrophage by engulfing bacteria, foreign particles, and damaged cells that occur in this layer.

The stratum granulosum has a grainy appearance due to further changes to the keratinocytes as they are pushed from the stratum spinosum. The cells (three to five layers deep) become flatter, their cell membranes thicken, and they generate large amounts of the proteins keratin, which is fibrous, and keratohyalin, which accumulates as lamellar granules within the cells (see Figure 5.5). These two proteins make up the bulk of the keratinocyte mass in the stratum granulosum and give the layer its grainy appearance. The nuclei and other cell organelles disintegrate as the cells die, leaving behind the keratin, keratohyalin, and cell membranes that will form the stratum lucidum, the stratum corneum, and the accessory structures of hair and nails.

The stratum lucidum is a smooth, seemingly translucent layer of the epidermis located just above the stratum granulosum and below the stratum corneum. This thin layer of cells is found only in the thick skin of the palms, soles, and digits. The keratinocytes that compose the stratum lucidum are dead and flattened (see Figure 5.5). These cells are densely packed with eleiden, a clear protein rich in lipids, derived from keratohyalin, which gives these cells their transparent (i.e., lucid) appearance and provides a barrier to water.

The stratum corneum is the most superficial layer of the epidermis and is the layer exposed to the outside environment (see Figure 5.5). The increased keratinization (also called cornification) of the cells in this layer gives it its name. There are usually 15 to 30 layers of cells in the stratum corneum. This dry, dead layer helps prevent the penetration of microbes and the dehydration of underlying tissues, and provides a mechanical protection against abrasion for the more delicate, underlying layers. Cells in this layer are shed periodically and are replaced by cells pushed up from the stratum granulosum (or stratum lucidum in the case of the palms and soles of feet). The entire layer is replaced during a period of about 4 weeks. Cosmetic procedures, such as microdermabrasion, help remove some of the dry, upper layer and aim to keep the skin looking “fresh” and healthy.

The dermis might be considered the “core” of the integumentary system (derma- = “skin”), as distinct from the epidermis (epi- = “upon” or “over”) and hypodermis (hypo- = “below”). It contains blood and lymph vessels, nerves, and other structures, such as hair follicles and sweat glands. The dermis is mostly composed of dense irregular connective tissue that is divided to two layers: the papillary layer and reticular layer.  Interwoven within these layers are numerous elastin and collagenous fibers, produced by fibroblasts (Figure 5.6). 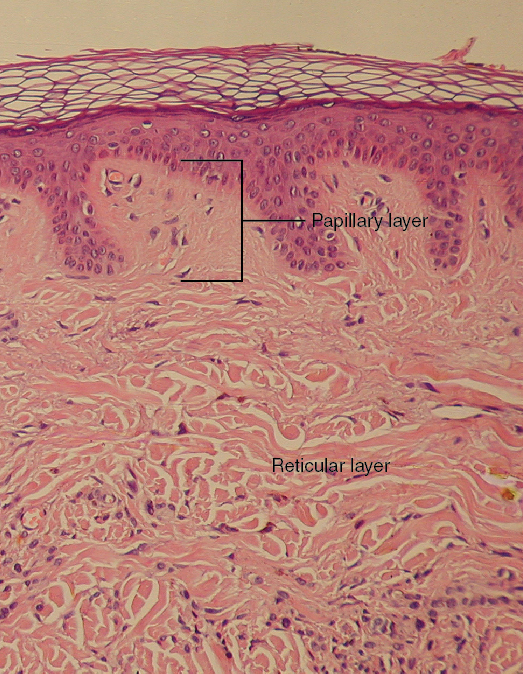 Figure 5.6. Layers of the Dermis
This stained slide shows the two components of the dermis—the papillary layer and the reticular layer. Both are made of connective tissue with fibers of collagen extending from one to the other, making the border between the two somewhat indistinct. The dermal papillae extending into the epidermis belong to the papillary layer, whereas the dense collagen fiber bundles below belong to the reticular layer. LM × 10. (credit: modification of work by “kilbad”/Wikimedia Commons)

The papillary layer is the superficial layer of the dermis that projects into the stratum basale of the epidermis to form finger-like dermal papilla (plural = dermal papillae) (see Figure 5.6). Dermal papillae increase the strength of the connection between the epidermis and dermis; the greater the folding, the stronger the connections made. Within the papillary layer are fibroblasts, a small number of fat cells (adipocytes), and an abundance of capillary loops. In addition, the papillary layer contains phagocytes, defensive cells that help fight bacteria or other infections that have breached the skin. This layer also contains lymphatic capillaries, nerve fibers, and touch receptors called the Meissner corpuscles.

Underlying the papillary layer is the much thicker reticular layer. This layer is well vascularized and has a rich sensory and sympathetic nerve supply. The reticular layer appears reticulated (net-like) due to a tight meshwork of fibers. Elastin fibers provide some elasticity to the skin, enabling movement. Collagen fibers provide structure and tensile strength, with strands of collagen extending into both the papillary layer and the hypodermis. In addition, collagen binds water to keep the skin hydrated. Collagen injections and Retin-A creams help restore skin turgor by either introducing collagen externally or stimulating blood flow and repair of the dermis, respectively.

The hypodermis (also called the subcutaneous layer or superficial fascia) is a layer directly below the dermis and serves to connect the skin to the underlying fascia (fibrous tissue) of the bones and muscles. It is not strictly a part of the skin, although the border between the hypodermis and dermis can be difficult to distinguish. The hypodermis consists of well-vascularized, loose, areolar connective tissue and adipose tissue, which functions as a mode of fat storage and provides insulation and cushioning for the integument.

The hypodermis is home to most of the fat that concerns people when they are trying to keep their weight under control. Adipose tissue present in the hypodermis consists of fat-storing cells called adipocytes. This stored fat can serve as an energy reserve, insulate the body to prevent heat loss, and act as a cushion to protect underlying structures from trauma.

Where the fat is deposited and accumulates within the hypodermis depends on hormones (testosterone, estrogen, insulin, glucagon, leptin, and others), as well as genetic factors. Fat distribution changes as our bodies mature and age. Men tend to accumulate fat in different areas (neck, arms, lower back, and abdomen) than do women (breasts, hips, thighs, and buttocks). The body mass index (BMI) is often used as a measure of fat, although this measure is, in fact, derived from a mathematical formula that compares body weight (mass) to height. Therefore, its accuracy as a health indicator can be called into question in individuals who are extremely physically fit.

In many animals, there is a pattern of storing excess calories as fat to be used in times when food is not readily available. In much of the developed world, insufficient exercise coupled with the ready availability and consumption of high-calorie foods have resulted in unwanted accumulations of adipose tissue in many people. Although periodic accumulation of excess fat may have provided an evolutionary advantage to our ancestors, who experienced unpredictable bouts of famine, it is now becoming chronic and considered a major health threat. Recent studies indicate that a distressing percentage of our population is overweight and/or clinically obese. Not only is this a problem for the individuals affected, but it also has a severe impact on our healthcare system. Changes in lifestyle, specifically in diet and exercise, are the best ways to control body fat accumulation, especially when it reaches levels that increase the risk of heart disease and diabetes.