Vision is the special sense of sight that is based on the transduction of light stimuli received through the eyes. The eyes are located within either orbit in the skull. The bony orbits surround the eyeballs, protecting them and anchoring the soft tissues of the eye (Figure 8.33). The eyelids, with lashes at their leading edges, help to protect the eye from abrasions by blocking particles that may land on the surface of the eye. The inner surface of each lid is a thin membrane known as the palpebral conjunctiva. The conjunctiva extends over the white areas of the eye (the sclera), connecting the eyelids to the eyeball. Tears are produced by the lacrimal gland, located beneath the lateral edges of the nose. Tears produced by this gland flow through the lacrimal duct to the medial corner of the eye, where the tears flow over the conjunctiva, washing away foreign particles. 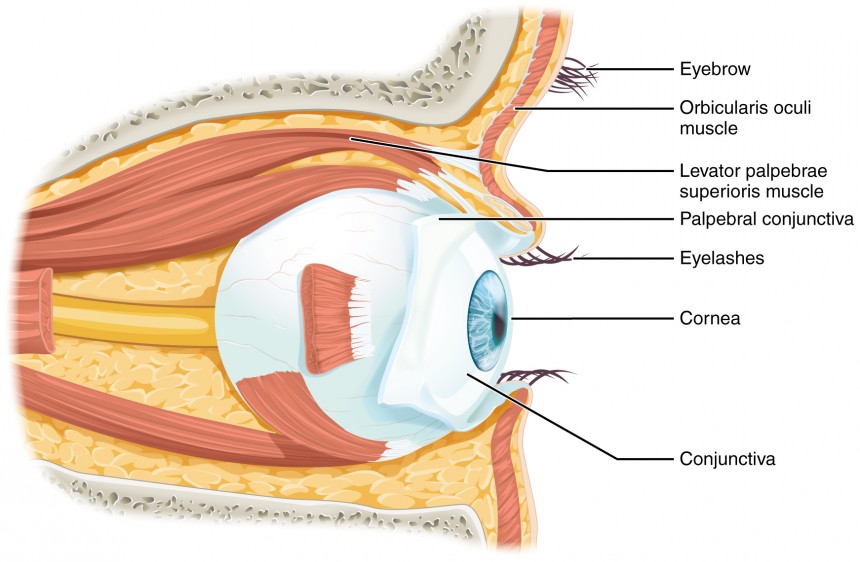 Figure 8.33. The Eye in the Orbit
The eye is located within the orbit and surrounded by soft tissues that protect and support its function. The orbit is surrounded by cranial bones of the skull.

The eye itself is a hollow sphere composed of three layers of tissue. The outermost layer is the fibrous tunic, which includes the white sclera and clear cornea. The sclera accounts for five sixths of the surface of the eye, most of which is not visible, though humans are unique compared with many other species in having so much of the “white of the eye” visible (Figure 8.34). The transparent cornea covers the anterior tip of the eye and allows light to enter the eye. The middle layer of the eye is the vascular tunic, which is mostly composed of the choroid, ciliary body, and iris. The choroid is a layer of highly vascularized connective tissue that provides a blood supply to the eyeball. The choroid is posterior to the ciliary body, a muscular structure that is attached to the lens by zonule fibers. These two structures bend the lens, allowing it to focus light on the back of the eye. Overlaying the ciliary body, and visible in the anterior eye, is the iris—the colored part of the eye. The iris is a smooth muscle that opens or closes the pupil, which is the hole at the center of the eye that allows light to enter. The iris constricts the pupil in response to bright light and dilates the pupil in response to dim light. The innermost layer of the eye is the neural tunic, or retina, which contains the nervous tissue responsible for photoreception. The eye is also divided into two cavities: the anterior cavity and the posterior cavity. The anterior cavity is the space between the cornea and lens, including the iris and ciliary body. It is filled with a watery fluid called the aqueous humor. The posterior cavity is the space behind the lens that extends to the posterior side of the interior eyeball, where the retina is located. The posterior cavity is filled with a more viscous fluid called the vitreous humor. 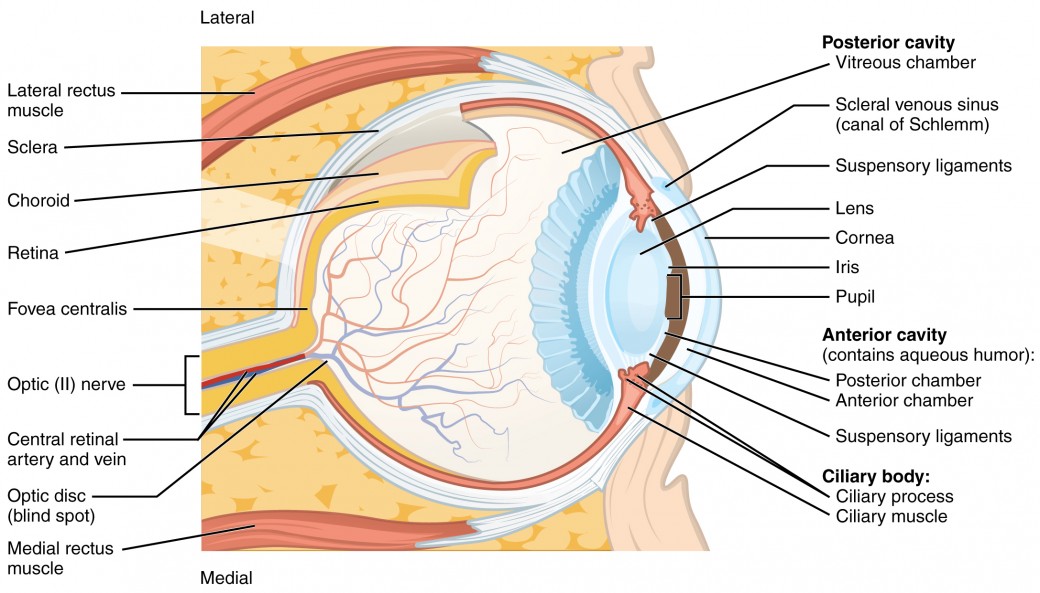 Figure 8.34. Structure of the Eye
The sphere of the eye can be divided into anterior and posterior chambers. The wall of the eye is composed of three layers: the fibrous tunic, vascular tunic, and neural tunic. Within the neural tunic is the retina, with three layers of cells and two synaptic layers in between. The center of the retina has a small indentation known as the fovea.

The retina is composed of several layers and contains specialized cells for the initial processing of visual stimuli. The photoreceptors (rods and cones) change their membrane potential when stimulated by light energy (Figure 8.35).  Rods are photoreceptors for black and white vision because they are sensitive only to the presence of light, not color wavelengths.  Cones, however, are for color vision.  Because cones require bright light to function, only rods allow us to see in dim light. The axons of the neurons in the retina unite to form the optic disc and leave the eye as the optic nerve (see Figure 8.34). Because these axons pass through the retina, there are no photoreceptors at the very back of the eye, where the optic nerve begins. This creates a “blind spot” in the retina, and a corresponding blind spot in our visual field.

At the exact center of the retina is a small area known as the fovea. At the fovea, the retina lacks the supporting cells and blood vessels, and only contains photoreceptors. Therefore, visual acuity, or the sharpness of vision, is greatest at the fovea. The visual stimulus in the middle of the field of view falls on the fovea and is in the sharpest focus. Without moving your eyes off that word, notice that words at the beginning or end of the paragraph are not in focus. The images in your peripheral vision are focused by the peripheral retina, and have vague, blurry edges and words that are not as clearly identified. As a result, a large part of the neural function of the eyes is concerned with moving the eyes and head so that important visual stimuli are centered on the fovea. 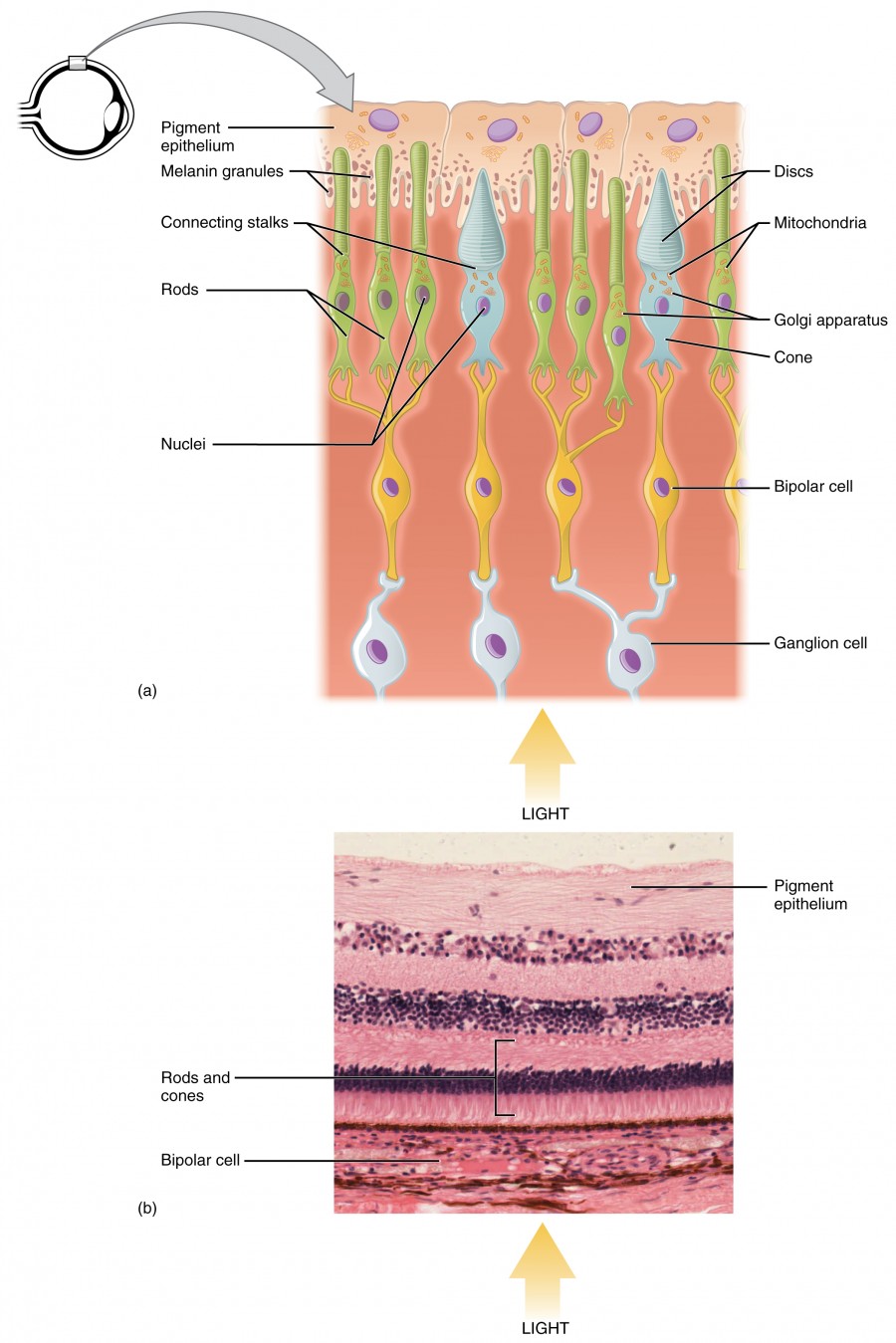 Figure 8.35. Photoreceptor
(a) All photoreceptors have inner segments containing the nucleus and other important organelles and outer segments with membrane arrays containing the photosensitive opsin molecules. Rod outer segments are long columnar shapes with stacks of membrane-bound discs that contain the rhodopsin pigment. Cone outer segments are short, tapered shapes with folds of membrane in place of the discs in the rods. (b) Tissue of the retina shows a dense layer of nuclei of the rods and cones. LM × 800. (Micrograph provided by the Regents of University of Michigan Medical School © 2012)

Focusing Light on the Retina

The retina, where the photoreceptors are found, is located at the posterior aspect of the eye. In order for the retina to transmit the most appropriate information to the brain, the light rays must land on the retinal cells in focus and with appropriate intensity. The cornea, pupil (the center of the iris) and the lens are responsible for meeting these requirements.

When light moves from one medium (such as air) into another medium (such as the cornea or lens) rays  will be refracted, or bent (Fig. 8.36). Because both the cornea and lens have curved surfaces, they refract some of the light rays entering the eye. In doing so, they compress the image of what we see so that a large amount of visual information can be processed by a small amount of retinal tissue. The cornea refracts more light than the lens does because its surface is more curved, but the lens has the ability to change its shape, and therefore fine-tune the amount of refraction necessary to focus the light rays on the retina. This process is known as accommodation. 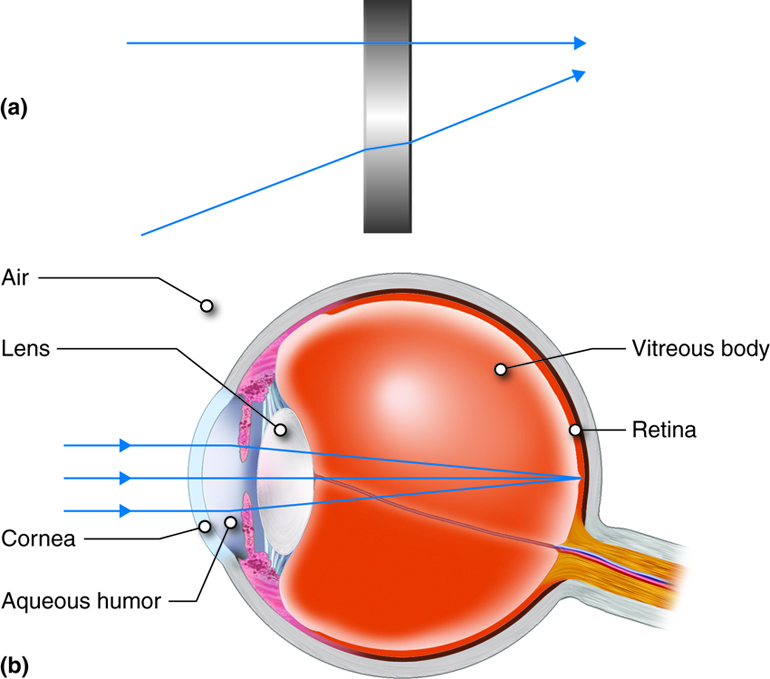 Figure 8.36.  The refraction of light rays as they pass from one medium to another (a), such as through the cornea and lens (b). This work by Cenveo is licensed under a Creative Commons Attribution 3.0 United States (http://creativecommons.org/licenses/by/3.0/us/).

Along with accommodation of the lens when objects are near, the pupil also tends to constrict to allow less peripheral light to enter the posterior chamber of the eye. In doing so, objects can be viewed more crisply. The pupil will also constrict when conditions are bright and dilate under low light conditions. This way the retina can receive an appropriate amount of light to activate its photoreceptors without bleaching them with too much light.

Video 8.1.  Using drawn models, the narrator explains the relationship between the ciliary muscles and the taughtness of the suspensory ligaments.

Figure 8.37.  Accommodation of the lens with distant and near vision. This work by Cenveo is licensed under a Creative Commons Attribution 3.0 United States (http://creativecommons.org/licenses/by/3.0/us/).

Sometimes the structures of the eye do not refract light appropriately, such that it focuses either in front of (myopia) or behind (hyperopia) the retina. This can happen, for instance, when the eye is not perfectly round. In order to correct for abnormalities in light refraction, glasses or contact lenses can be added to the system to better focus light on the retina and improve vision.

Figure 8.38.  Correcting abnormalities in light refraction in the eye. This work by Cenveo is licensed under a Creative Commons Attribution 3.0 United States (http://creativecommons.org/licenses/by/3.0/us/).